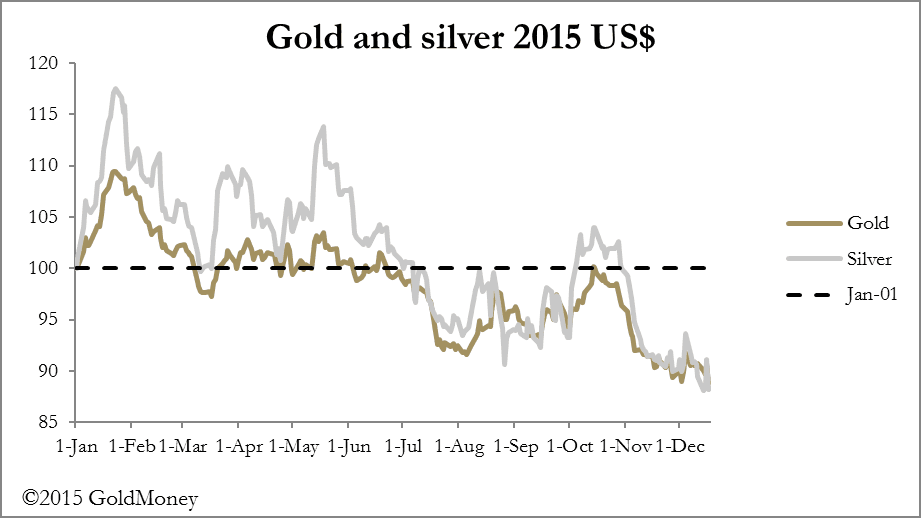 On Wednesday, the Federal Reserve Bank raised its Fed Funds Rate target to 0.25%-0.5%, which is the interest rate paid on bank reserves held at the Fed.

The rise was widely expected, the Fed having signalled it in advance. Having drifted somewhat lower ahead of the announcement, precious metals prices recovered some ground on the announcement, before sinking lower yesterday. Gold is down from $1072 on last Friday's close to $1054 and silver is down from $13.93 to $13.75 in early European trade this morning.

The logic behind the rise in interest rates, it seems, is that domestic credit is expanding at a moderate rate of about 4%, reflecting a pick-up in demand from the non-financial sector. Typically, this is financing purchases of homes and big-ticket items such as motor vehicles, and is taken by the Fed to be evidence of recovering demand. The Fed hopes that a modest and gradual rise in interest rates, perhaps in four quarterly steps next year, will allow inflation to rise in a controlled manner towards the 2% target, particularly after recent falls in energy and commodity prices drop out of the back-end of the inflation statistics. Putting to one side the fact that every time the Fed embarks on a policy of gently rising interest rates, it turns out not to be gentle and ends up provoking a stock market crash, the plan is widely thought to be credible.

No allowance has been made for the debt situation, where yield spreads are widening alarmingly, and commodity-related debt looks like being the default story for 2016. No allowance is made for the gathering evidence of a severe slump in world trade, and therefore of an economic crisis everywhere but America. These concerns were dismissed by Fed Chair Yellen in the press briefing that followed the interest rate announcement.

That great American satirist, Tom Lehrer, had a template for the Fed's policy in his song about Werner von Braun, Hitler's rocket scientist who worked for America after WW2: "'Once the rockets are up, who cares where they come down? / That's not my department,' said Werner von Braun." Similarly, the Fed claims its business is to manage US monetary policy, and other countries' economic affairs are not its concern.

It is hard to avoid the conclusion that this attitude will be the Fed's undoing, when all markets are demonstrably adrift from economic reality. The black swans are getting restless.

Finally, by way of illustration the chart below shows how extreme the hedge funds positions have become in the paper gold market that is Comex. 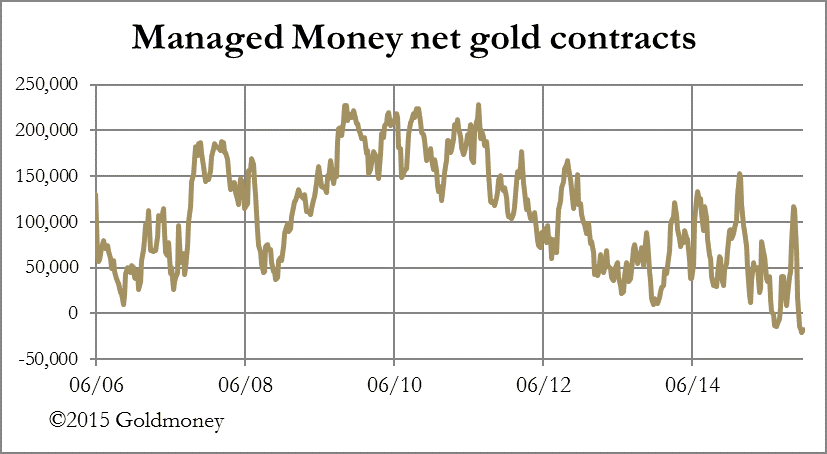 Only once before, in the history of Comex's disaggregated data, have the speculators in the investment management industry been net short, and that was on 28th July last. Today's position is even more extreme. Doubtless, similar positions exist in other commodity contracts. History tells that when any trade, in this case long-dollar and short-everything-else gets this one-sided the reversal will be swift, unexpected and brutal.