Jun 15, 2018·Alasdair Macleod
On Wednesday, the Federal Open Markets Committee raised the Fed Funds Rate to a target of between 1.755 and 2% and raised its expectation of an average rate for 2019 from 2.9% to 3.1%. Chairman Powell described the US economy as being in full employment, with business investment increasing. Notably, he ducked the inflation issue by waffling. 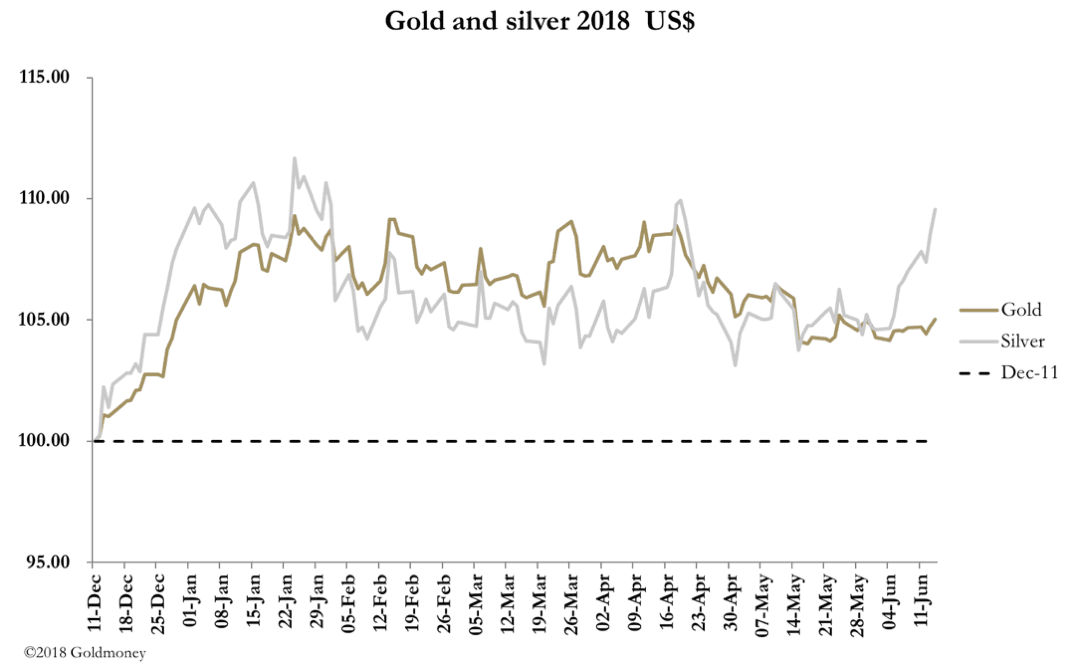 Gold in dollars was hardly up on balance with the price at $1300.75 in early European trade this morning (Friday) compared with $1298.80 at last Friday’s close. Silver outperformed gold, rising 38 cents to $17.17 over the same timescale. It appears silver’s oversold position on Comex is beginning to unwind in bear squeeze conditions.

The FOMC decision to raise the FFR was widely expected. Powell’s bullish tone at the press conference came as a surprise to some, in that it highlighted the contrast with the ECB’s monetary stance, which is still aggressively stimulative. Even accepting the fiscal stimulus being applied by Trump, in today’s globalised economy, how can such contrasting positions arise between the two most powerful central banks?

The FOMC statement was followed yesterday day by the ECB’s monthly press conference, which only partially conceded the ECB’s former position. QE will end in December, but interest rates will remain negative for a further year. The result was the EUR/USD exchange rate fell sharply from 1.183 to 1.155. The euro price of gold gained EUR25 as a result. The next chart shows gold priced in euros and the other major currencies. 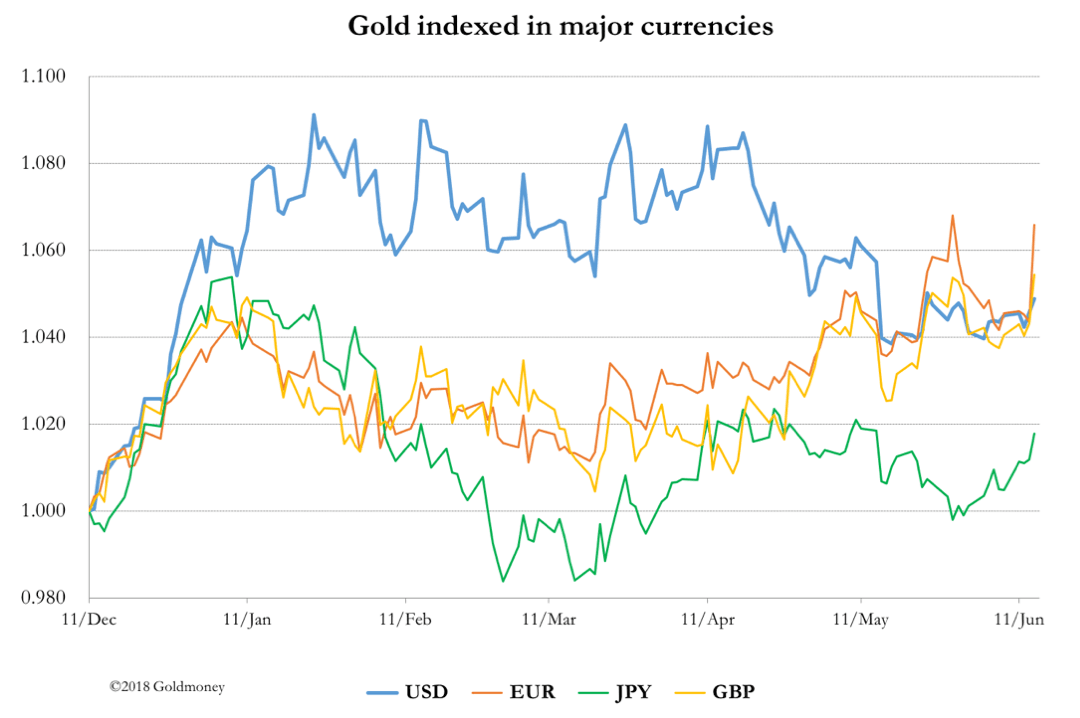 The ECB is not alone in behaving as if their currency areas are still in deep recession. Any letting up on interest rate suppression has been grudging, and the consequences on the general level of prices are bound to end up being highly inflationary. The Fed is the only central bank that sees the danger and is rapidly trying to normalise monetary conditions.

Strains are predictably developing in EM currencies, with the weaker ones losing value rapidly. From Ankara to Jakarta to Brasilia, interest rates will have to rise sharply to protect these currencies, and all EM economies have enjoyed excessive commercial property booms. Higher interest rates are certain to lead to property crises in these jurisdictions.

A new EM crisis is therefore on the cards that could dwarf the Asian crisis of twenty years ago. This could be important for gold, because it should increase demand significantly, particularly in Asia. Central banks will be all too aware of the potential effect on the gold price, and the Russians and others are likely to increase their gold reserves more rapidly as a consequence.

We await to see if these developments take place. Meanwhile, the markets might boost the dollar on a combination of interest rate differentials with respect to euro rates, and in anticipation of a flight to quality on the back of EM distress. The question then arises, in the event of a new EM financial crisis will the Fed back off? Unlikely in my view.