Gold and silver are marginally lower on the week in early morning trade in London, with gold at $1223 and silver at $14.26. On Tuesday and Wednesday morning, prices dipped lower, but recovered later on Wednesday. An option expiry on Comex appeared responsible for this action, with bullion bank traders ensuring as many December calls as possible expired worthless. 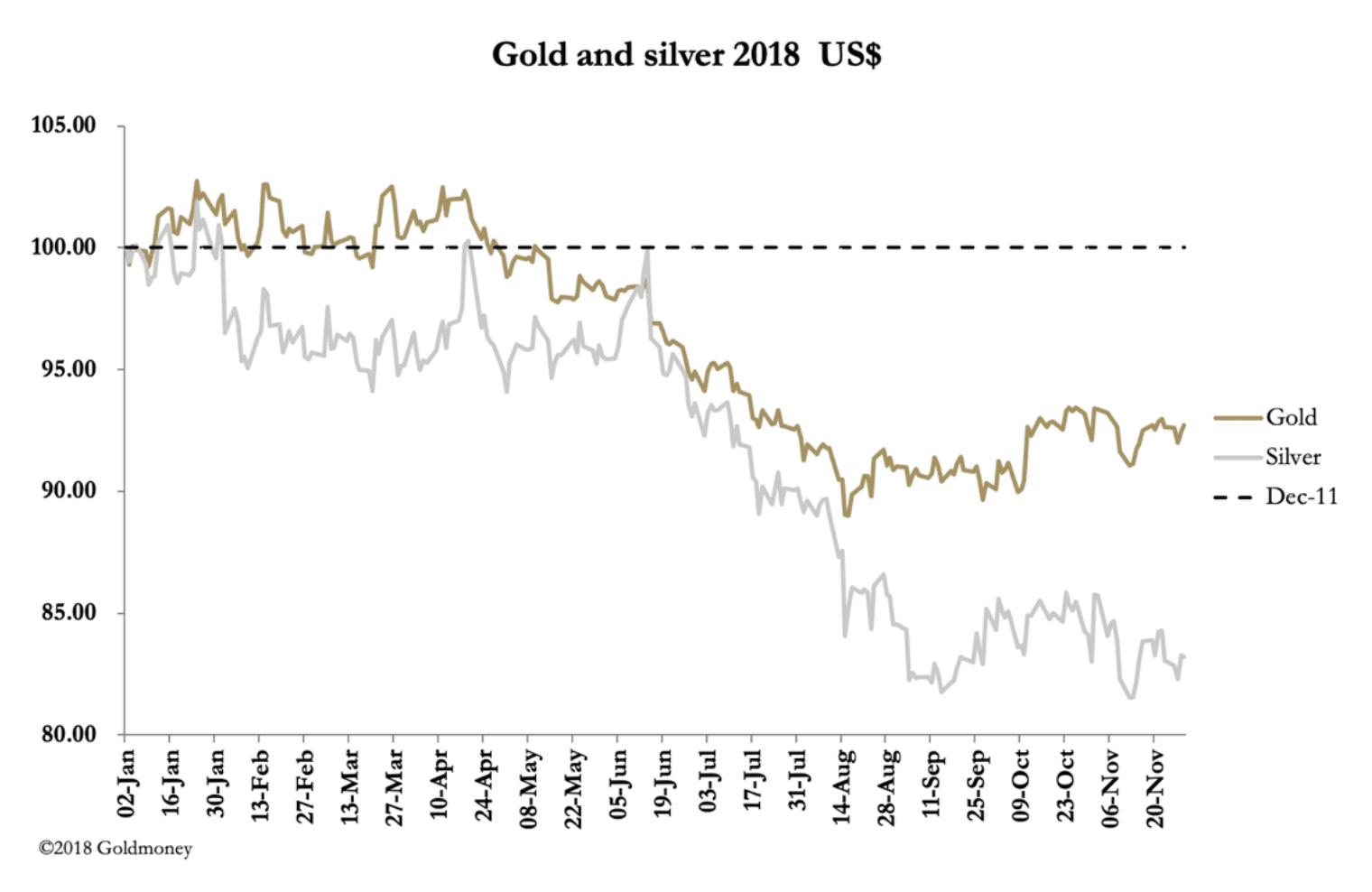 Daily open interest figures have fallen sharply for both metals, but most notably for gold, with the December contract running off the board this week. The fall in OI against a background of relative price stability is unusual, and is illustrated in our second chart.

Normally, one would expect speculative positions to be squeezed as a contract expires. Speculators ha­ve a choice to either roll their positions into the next liquid contract or call it a day. With their positions at nearly record net short levels recently, this suggests contract expiry would force a bear squeeze. It hasn’t. So, what is going on?

First, we should note that from last Friday, gold’s OI has fallen nearly 117,000 contracts in four trading sessions. At the same time, 58,618 contracts have been “exchanged for physical”. More correctly, EFPs represent contracts which have been closed against a matching position being opened on another exchange, usually the forward market in London. EFPs have increased sharply, particularly on Tuesday, Wednesday and Thursday. So, this suggests that a significant portion of the bear position in the market has not been closed, but merely transferred out of sight. The same was true for silver, but to a lesser extent.

This probably means the net short position of the managed money category on Comex has reduced materially from the net minus 51,851 contracts reported on 20 November, the last Commitment of Traders report. If so, much of the bear squeeze will appear to have evaporated, but it has only been transferred to London.

All this goes to show how trading statistics can be gamed, and it is better to stand back and take a dispassionate overview. Our next chart is of the technical position, taken from December 2014. 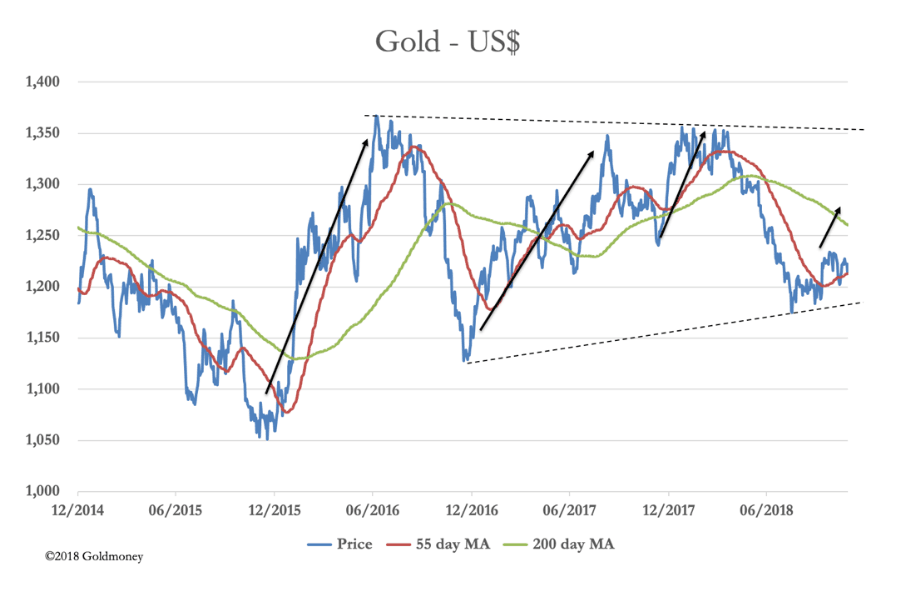 The black arrowed lines show that every year from December 2015 there have been significant rallies in the gold price into the early months of the following year. This seasonality was also apparent in December 2014, though that rally did not last beyond the following January. Will we get a similar push this time?

So far, it appears that gold has been forming a bottom, giving it the potential to rally initially to the area of the 200-day moving average at $1260. Whether it goes much further will likely depend on the dollar, but if it can break out of the consolidation pattern between the pecked lines, then gold’s bull market could become spectacular.

The G20 meeting today and tomorrow in Buenos Aires might give us a firmer sense of direction for gold in the first half of 2019. But it might be a mistake to read too much into the dollar’s trade weighted index, because it is mostly a reflection of the euro.

But that is another story tied up with interest rate differentials and Brexit. Our last chart is of gold indexed to the bottom in 2015 in four major currencies. 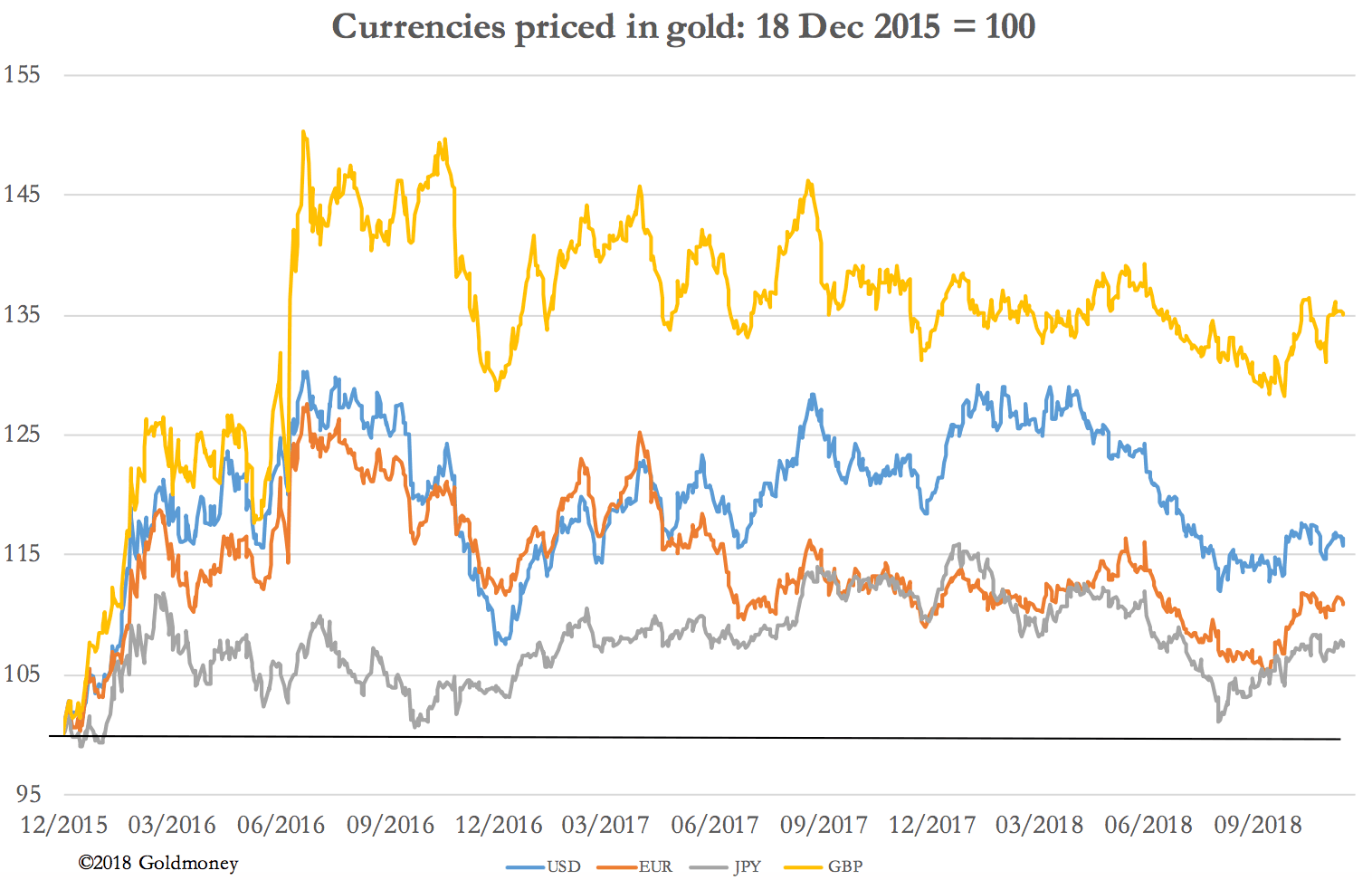