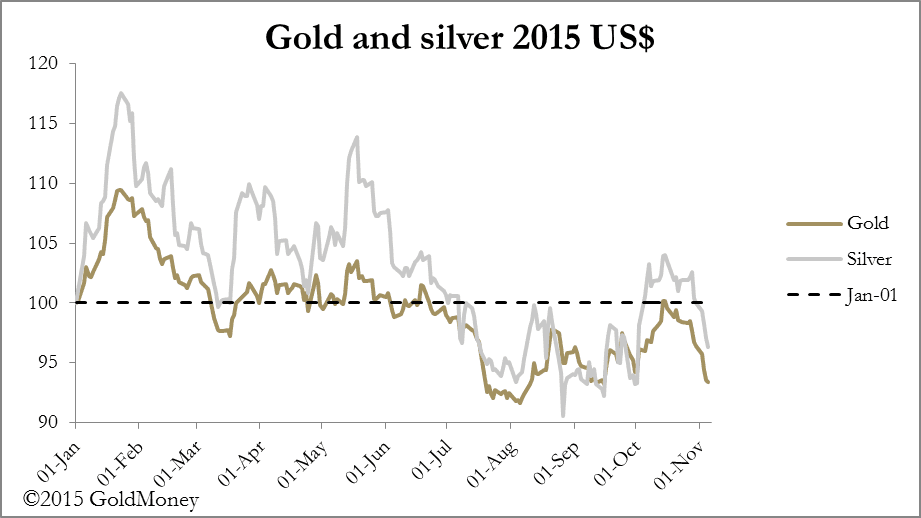 The week was characterised by rumours that the Fed was determined to raise the Fed funds rate at the FOMC's December meeting.

As a result gold and silver prices fell sharply to show losses of 6.6% and 3.7% on the year respectively. There was little doubt that this suited the bullion banks, which used the opportunity to close their short positions profitably. This was reflected in the substantial falls in Open Interest on the Comex futures market, which is shown in the two charts below for gold and silver.

There was a growing consensus that precious metal prices are headed lower, and it is in that light we must look at the relationship between prices and the interest rate rumour-mill. The truth is the statements from FOMC members were ambiguous about what action will be taken.

But let us suppose they do raise rates in December: what then? There is little doubt that precious metal prices are already discounting a rate rise, perhaps to a Fed Funds rate at 0.25-0.325%. Aside from an initial mark-down for gold and silver, one would expect a rise of that quantity to be broadly discounted, suggesting that once out of the way a rise in interest rates would allow commodity prices as well as gold and silver, some scope for recovery. The key as always would be whether or not "forward guidance" indicated that further rises are to be expected in the near future.

This seems unlikely, for the simple reason that the dollar remains strong, and the global economy appears to be in dire straits. With little sign of any more than modest below-trend growth in the US economy, the Fed's FOMC members are likely on balance to continue to be more worried about price deflation than price inflation.
The evidence will be in bank reserves, if a higher Fed funds rate leads to an increase from the current $2.6 trillion. The banks are not keen to lend money into the non-financial economy at the current Fed funds rate, let alone if it rises.

Another way to look at this problem is since the Lehman crisis banks have focused on lending to the government, and then using the collateral obtained to speculate in other assets. A rise in interest rates might at the margin discourage banks from extending their operations in securities markets, unless government bond yields increase enough to offset the interest rate rise; in which case the feel-good factor in equity markets might begin to evaporate.

The Fed remains trapped at the zero bound, even if there is a small rise in the Fed funds rate next month. Raising rates might alleviate the FOMC's feeling of helplessness, but if they raise rates without signs of improving economic growth or a return to price inflation, it would probably have to reverse the rise in short order, or find other means to impart stimulus to the economy.