The correction in the gold price continued this week, falling another $40 to a low of $1290 yesterday. In all, gold has retraced nearly half this year's rise and silver has retraced most of its rise since end-January, with the gold/silver ratio increasing to over 65 times. However, this disappointing performance for precious metals masks some strong undercurrents in gold. 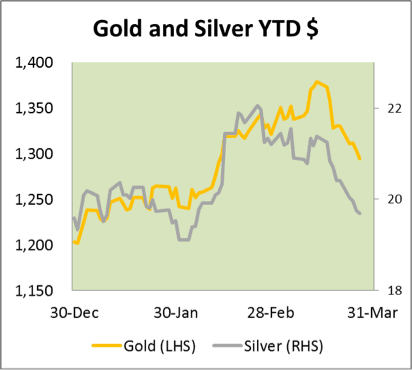 First let's look at the bears' case. Growing evidence of a developing credit implosion in China is expected to lead to falling demand for industrial commodities, with importers likely to default on supplier agreements. This has hit industrial metals such as iron and copper particularly hard, and seems likely to undermine a wider range of commodity prices. Copper in particular is said to be at the centre of multiple hypothecations to raise cash to invest in high-yielding Chinese bonds. I put this story in perspective in my weekend article, but there is no doubt that growing signs of China's financial stress have encouraged commodity bears and frightened the bulls.

Another negative is confusion ahead of the Volker Rule in the Frank-Dodd legislation which comes into effect next Tuesday. This is the deadline for banks to cease proprietary trading. Therefore they are under pressure to close out all commodity trading positions, except where they act as market makers, when they must limit their positions to "not exceed the reasonably expected near-term demands of the market and customers". In other words it appears that long-term bull and bear positions such as in gold and silver must be justified or cut.

The effects of the Volker Rule will probably distort markets beyond next week because the so-called Final Rule is immensely complex, with 71 pages of actual rules and 900 added pages containing over 2,800 footnotes. Some banks are likely to continue trading while the lawyers have a field-day.

The negatives listed above are associated entirely with the paper market. However these mask some new positives for physical demand. Even the Japanese are now buying physical gold according to yesterday's Financial Times, partly to beat a sales tax increase, but importantly because suspicions over Abenomics seem to be increasing. The central banks of Russia, Turkey and Iraq have all taken the opportunity presented by current prices to increase their gold reserves, buying a combined total of 52.53 tonnes in recent weeks. Germany has also said she is to redouble her efforts to get her gold back from the US, and lastly India-watchers think there is a sporting chance that gold import rules might be eased as early as next week.

In summary, current prices appear to be stimulating new sources of physical demand in a deeply oversold physical market. At some stage gold and silver are set to rise strongly, but in the very short term paper traders remain in control.

Here are next week's announcements.