Gold and silver prices gained modestly over the week, during which the latest FOMC minutes were released. These were generally read to be more dovish compared with the previous month.

FOMC members appear from the minutes to be confused. The previous month's conclusion, that if it wasn't for the weather the economy is improving and so interest rates will increase a little earlier than expected, is replaced with renewed anxiety about the outlook now the weather has improved. And who can blame them: after QE1, 2 and 3, some iffy numbers like unemployment have fallen, but where's the price inflation? The overriding concern for all central bankers is still the prospect of deflation.

As an aside the numbers behind the Fiat Money Quantity were released this morning, and they have risen a further $135bn, dismissing any thoughts that tapering QE might be the problem. It's not, because monetary inflation is continuing regardless.
Last Friday I wrote about the divergence in open interest between gold and silver. This has continued into this week and is really unusual. First, gold's chart: 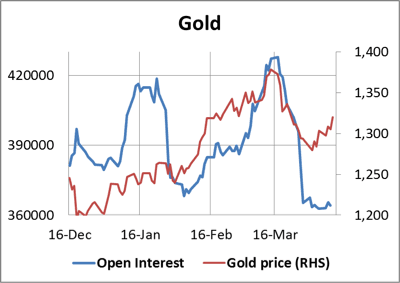 The low point for gold's open interest was last Friday, when gold was already four days into its rally. This signals very low levels of speculative interest: the last seller has turned off the lights and left the building. Therefore, gold appears to have built a short-term base under $1300. 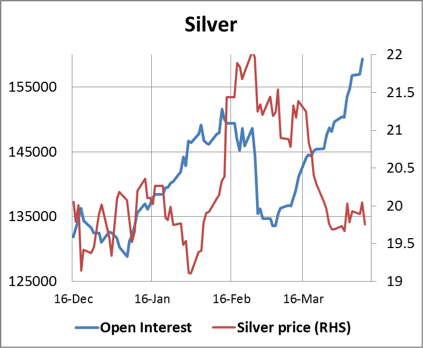 In this case attempts by market-makers to shake out the bulls have been met by solid demand with open interest rising strongly. The exception is the Money Managers category, which suffers frequent and dramatic changes of mind. The chart below shows the dramatic volatility in Money Managers' short positions. 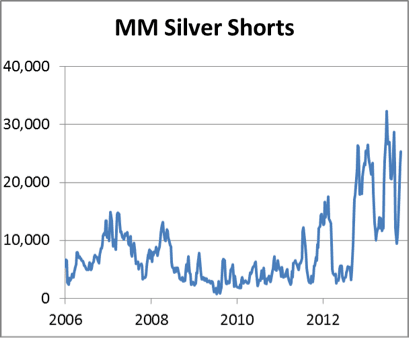 The long-term average of Money Managers' shorts before 2013 was 6,130 contracts, yet in the last five weeks they have increased them by nearly 16,000 contracts. This increase in shorts should have allowed the bullion banks to reduce their short positions. Not so: according to the most recent Bank Participation Report they are net short of a total of 35,321 contracts, an increase of over 3,000 contracts last month.

Unlike gold, where Comex volume is moderate, silver volume is high indicating very strong support at current levels. The obvious conclusion is that bullion banks trying to balance their silver books cannot do so at current prices. Yet higher prices are likely to trigger a vicious bear squeeze, so it appears the bullion banks with short silver positions will remain trapped either way.

Bear in mind the run-up to Easter next week-end, which is why Tuesday and Wednesday have lots of announcements while on Friday there is only one. My next market report will be on Thursday.