Market Report: Back In Consolidation Zone

After the excitement last week, when silver suddenly enjoyed a bear squeeze briefly pushing it into $17.30 territory, gold and silver returned to their humdrum consolidation phase. This week, gold fell $17 to trade at $1319 earlier in Europe this morning (Friday), and silver declined 58 cents to $16.53. 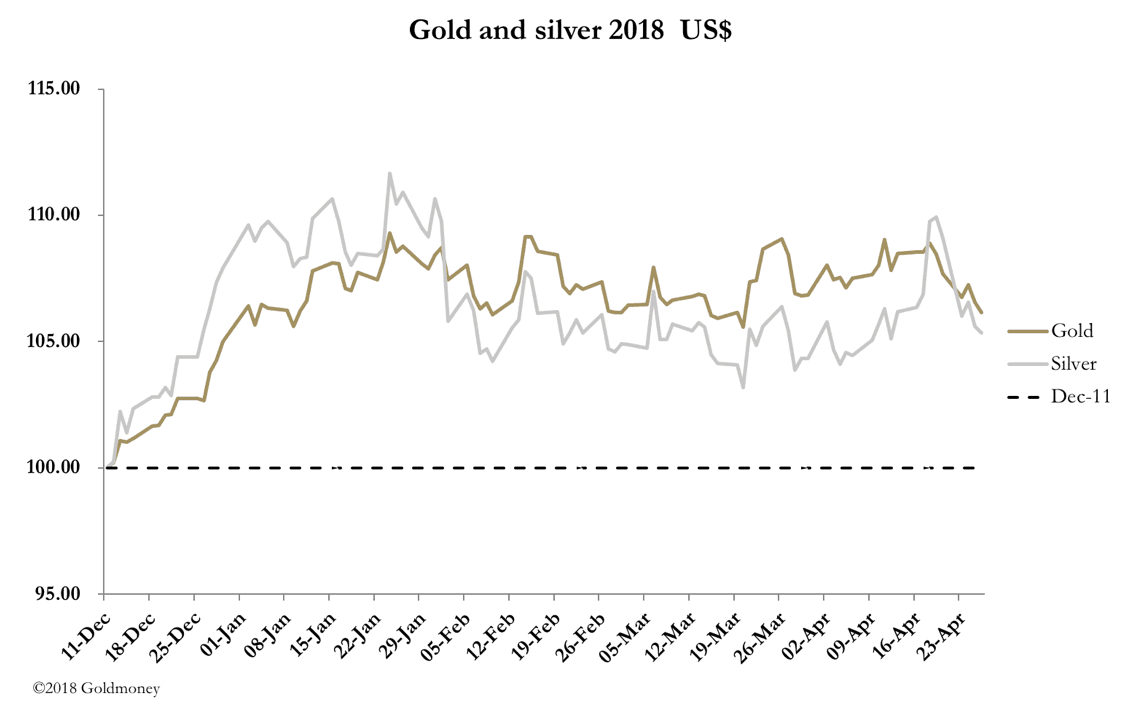 The reason for weakness in precious metals is a strong dollar, which is shown in our next chart, which is of the trade weighted index. 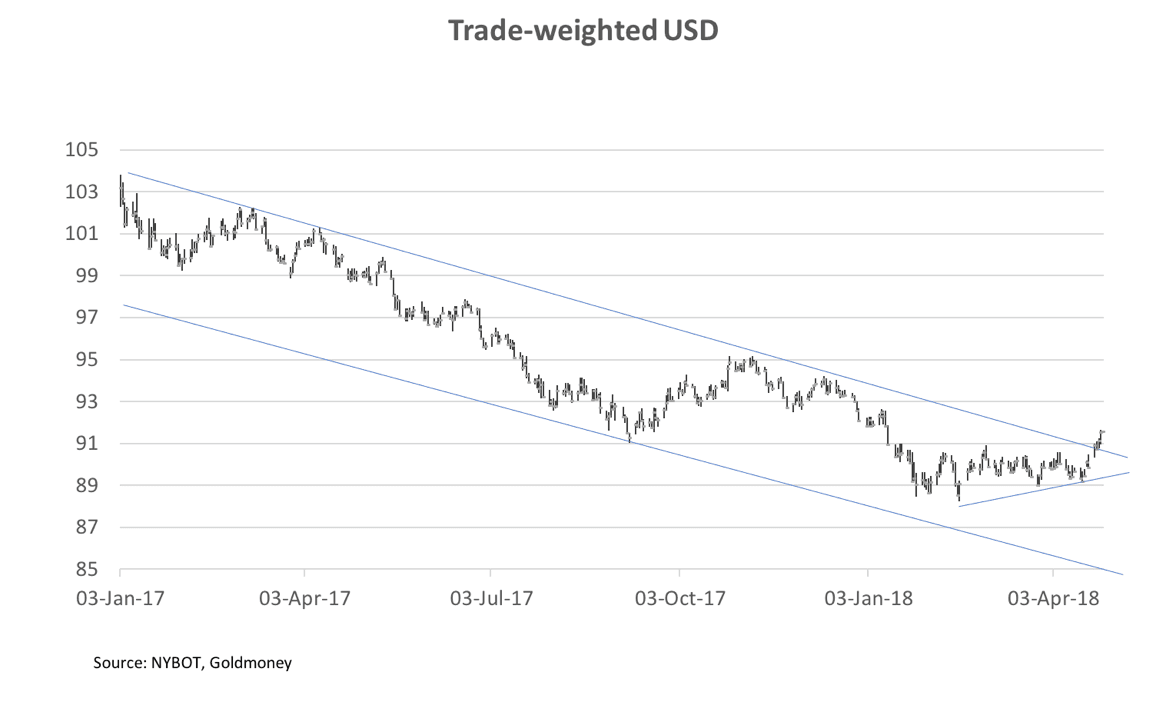 Instead of breaking below the short-term trendline, the dollar has broken out of its downtrend channel, suggesting at the very least that the dollar’s consolidation is of a larger magnitude than the countertrend rallies we have seen since President Trump was elected.

That being the case, gold appears vulnerable to a possible break downwards from its consolidation pattern. Time to look at its technical chart, with the moving averages that traders commonly use. 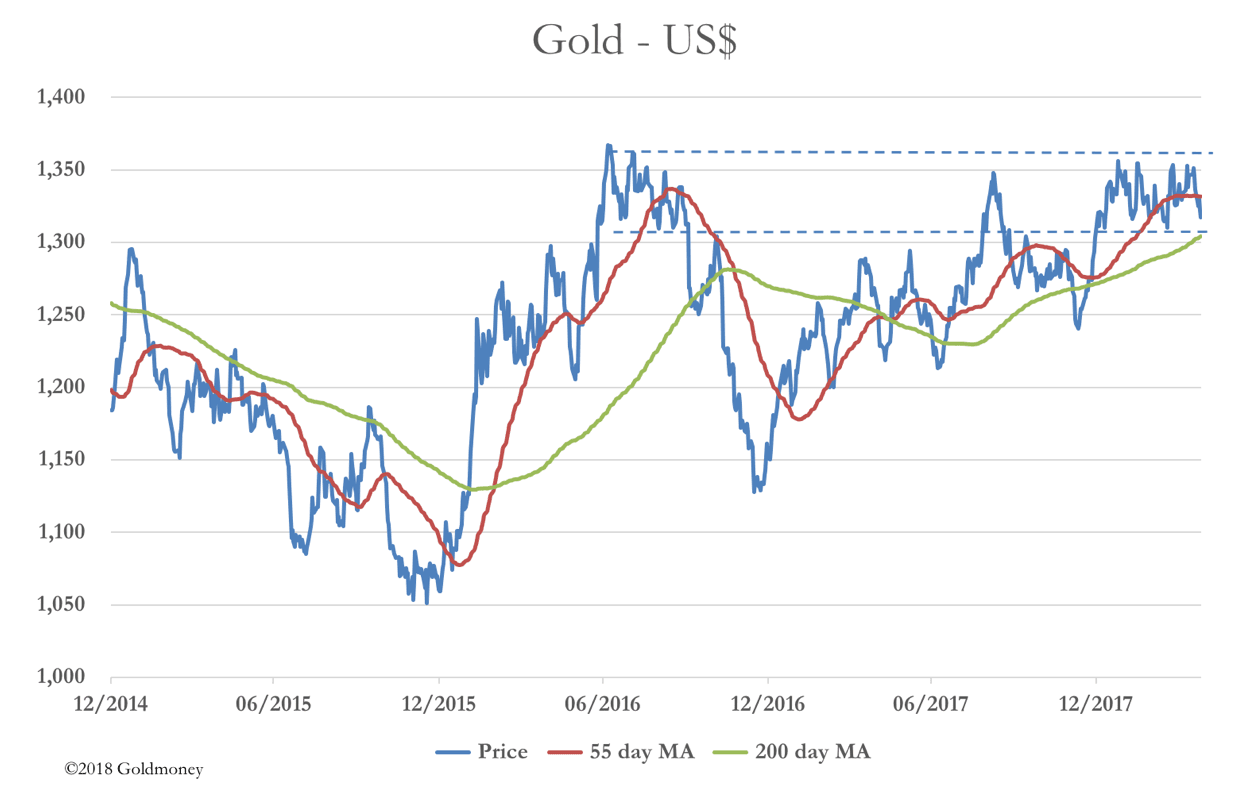 We can see that the dollar’s strength has put gold back in its box, moving it towards the lower end of its consolidation zone. In the process, it has broken below the 55-day moving average and appears likely to test the 200-day MA, which is at $1303. So, $1300 possibly beckons, and will be regarded as an important test point.

It would be nice to be able to say that $1300 will be a bottom for the price. Markets are not so predictable, and it would be foolish to rule out a break below $1300 and a test of the $1275 level. Whether this transpires will depend on the dollar, and the forces driving it higher.

The largest component of the dollar’s trade-weighted index is the euro, so it is not necessarily the dollar being strong, but the euro being weak. Since Monday, the euro fell against the dollar from 1.2350 to 1.2100. The ECB yesterday announced no change in its accommodative monetary policy, which did not help. However, it’s not just a weak euro. Other currencies have also weakened against the dollar, and some emerging market currencies have been badly hit. We must conclude that this period of dollar strength could have more to it.

Trade imbalances are taking a back seat relative to interest rates. While the dollar has risen, so have US bond yields. The 10-year US Treasury broke above the 3% level, a Rubicon for some bond traders. Meanwhile, the Fed is still pursuing a policy of raising the Fed Funds Rate in baby steps, probably as soon as next month. In the absence of a significant rise in core prices, this may make the dollar appear to be an attractive proposition relative to other currencies.

By the time this report is published, the preliminary first quarter GDP advance estimate will be released by the Bureau of Economic Analysis at 0830 EST. Early indications of gross output for 2017 Q4, which tends to lead GDP by about 12 weeks, suggest that this could surprise markets on the upside, in which case the dollar might even force gold to test $1300 by close of play today.