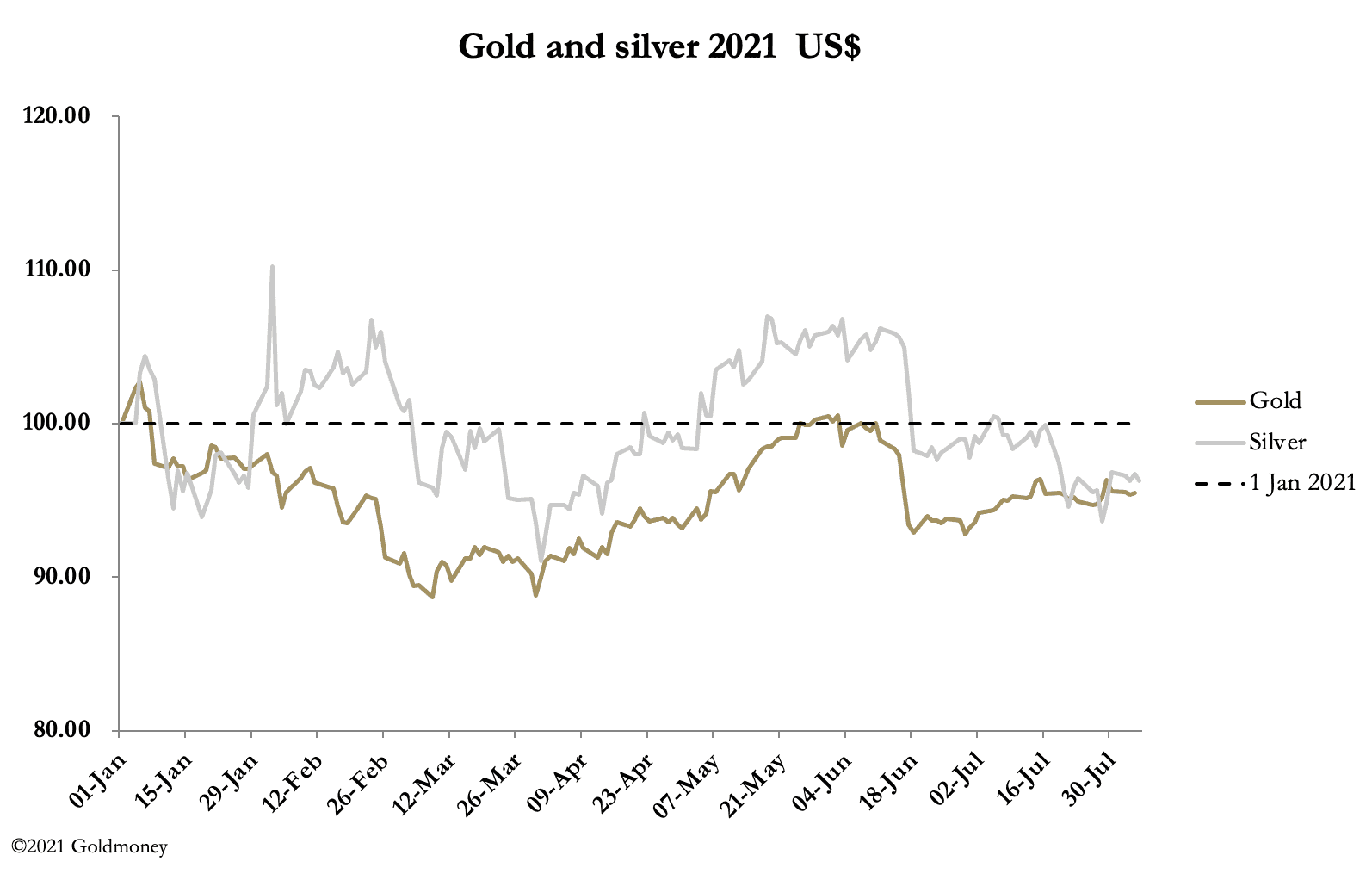 Gold and silver saw little change this week, with gold down $12 from last Friday’s close in early European trade this morning at $1801. And silver was off 27 cents over the same timescale at $25.17. On Wednesday there was a sharp rally, which took gold up to $1831 and silver to $26 before both metals fell in less than an hour by $27 and 60 cents respectively.

The action was revealing. It appears that a buyer or buyers appeared ahead of London’s afternoon gold fix, only for the price to be slammed on the fix. Observing gold’s price moves in recent months, the price getting slammed at 10.00 AM Eastern 15.00 UK time is a regular occurrence. Doubtless, the London PM fix is being played by bullion bank market makers. The problem with it is not that they make money on the trade, but that they are acting in concert.

It is a problem that lies at the door of the LBMA, because it is the afternoon fix that is the problem. Either strict dealing rules and penalties for breaching them need to be introduced on the fix, or the fix should be abandoned altogether. But the LBMA represents the parties that benefit from this arrangement, so the right approach is to abolish the fix.

Doubtless, creating a predictable tide of rising and falling prices allows the majority of bullion bank traders to generate substantial profits in London’s forwards market to offset any notional losses on their short positions. The problem for the regulators is that sooner or later, the gold price will escape the confines of the current jobbing range and inevitably, one or more banks are going to be caught out with losses they are unable to absorb.

For investors and observers, it is important to understand why it is that the prices of gold and silver have failed to adequately reflect the losses of purchasing power for fiat currencies measured against the wider commodity complex.

There is a second reason for this apparent mispricing. Hedge fund traders are either algorithmic traders, or purely switching between the dollar and gold — a pairs trade. This is manner from heaven for market makers because it allows them to predict with reasonable accuracy the market’s response to their actions. And as for investors who don’t understand what is happening —99.99% of the investing public in the dealers’ terminology they are the muppets.

For exactly a year, when gold peaked at $2070, the gold price has been bought under control by bullion banks capitalising on profit-taking after a sharp rise from the previous March. The investing public has now lost patience, and many have lost money, or at least rue the fact that they could have sold at higher prices. This is why this column discourages ordinary folk from trading or investing, because the odds against success are heavily loaded.

Far better to own gold and silver with the intention of spending them when, as will inevitably happen, the worthlessness of fiat money is finally rumbled.