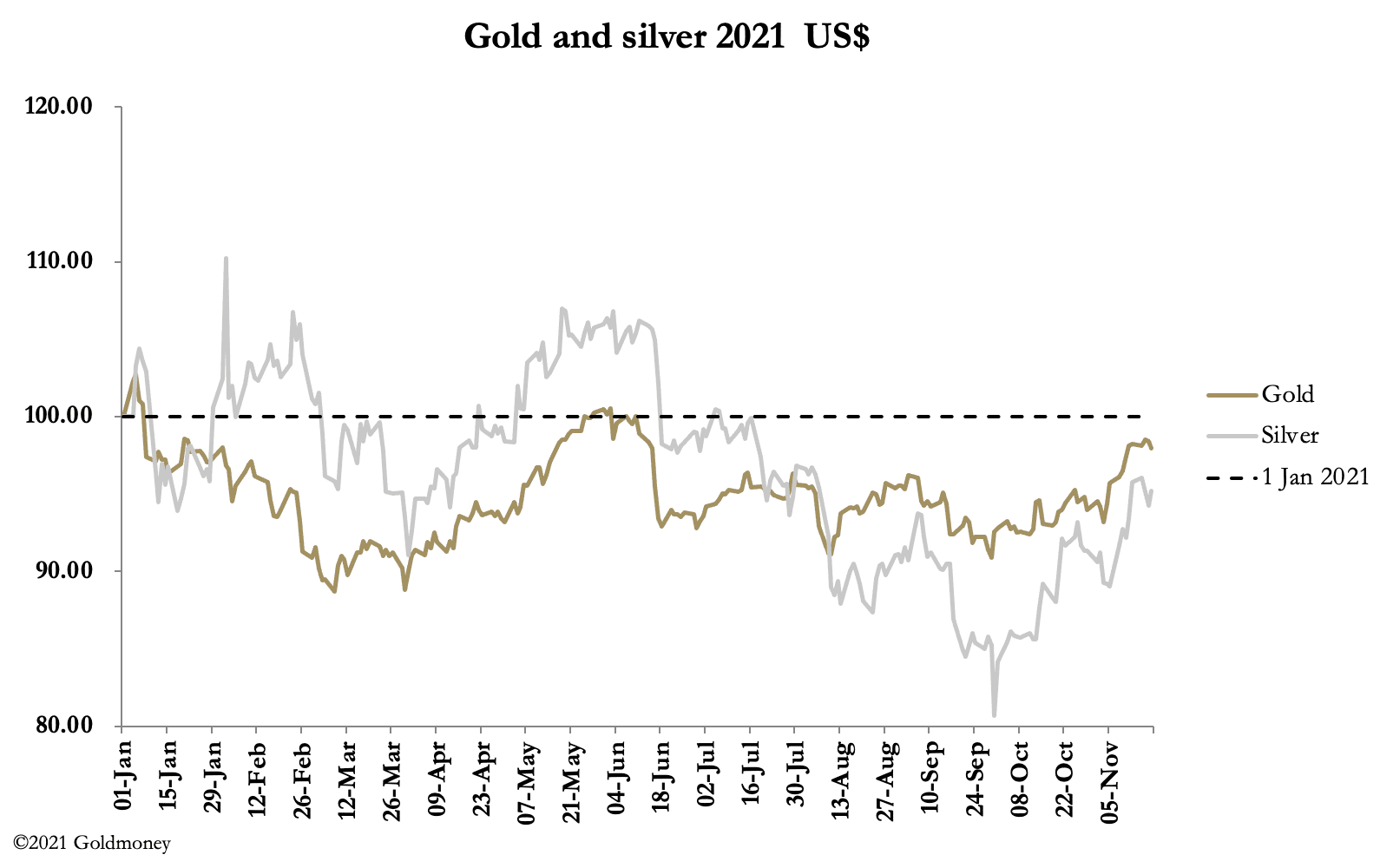 Gold and silver consolidated recent gains, drifting lower on the week. Gold lost only $5 from last Friday’s close to trade at $1860 in morning trade in the European time zone, but silver fell 55 cents to $24.75 over the same timescale. Volumes on Comex remained healthy but below recent highs.

Technically, gold is looking bullish, as our next chart shows. 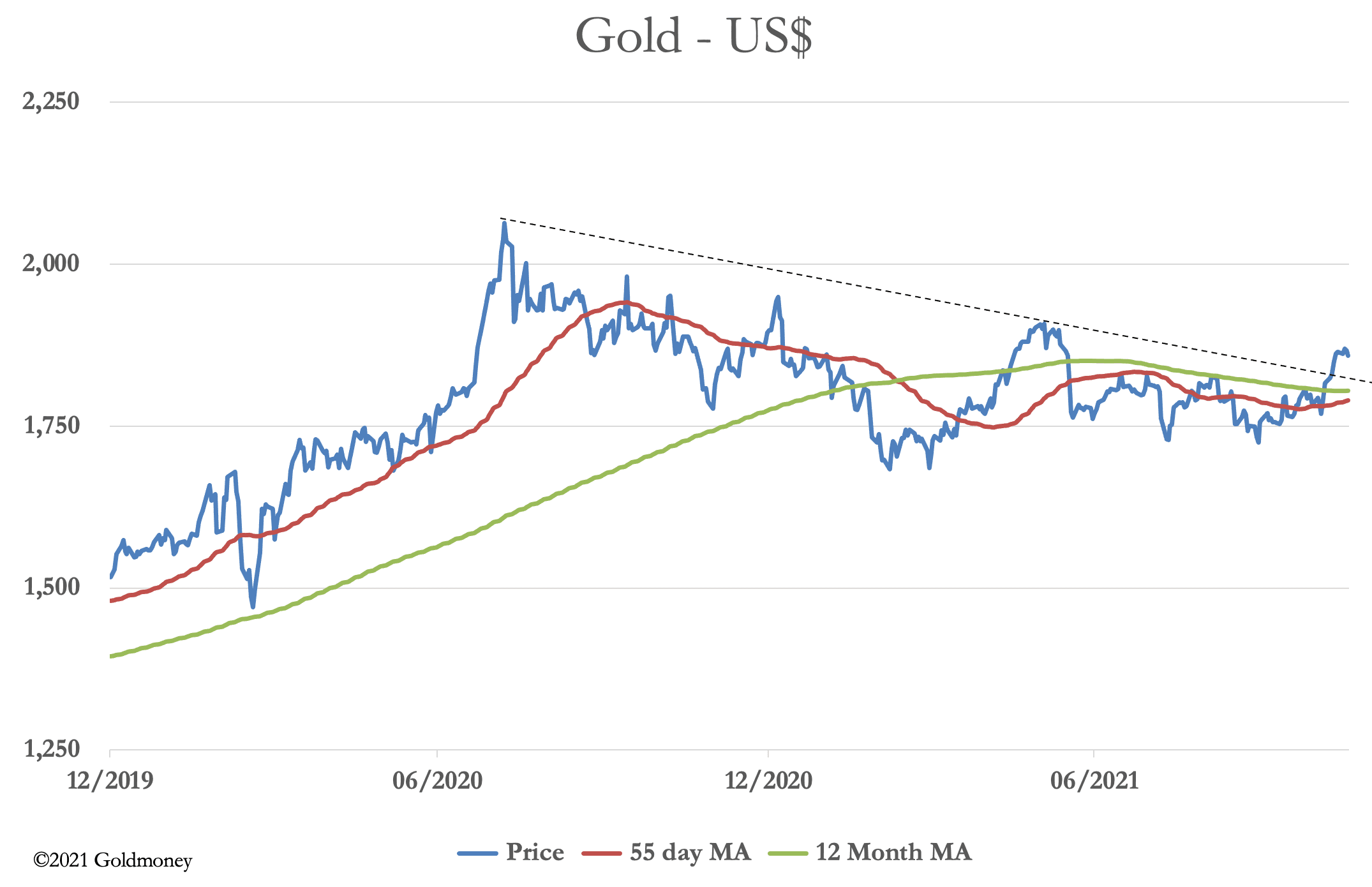 A golden cross forming with the moving averages both turning up beneath the gold price and gold appears to have broken a falling trendline giving an early confirmation of a new uptrend.

There has also been a bullish rise in Open Interest on Comex, which is our next chart. 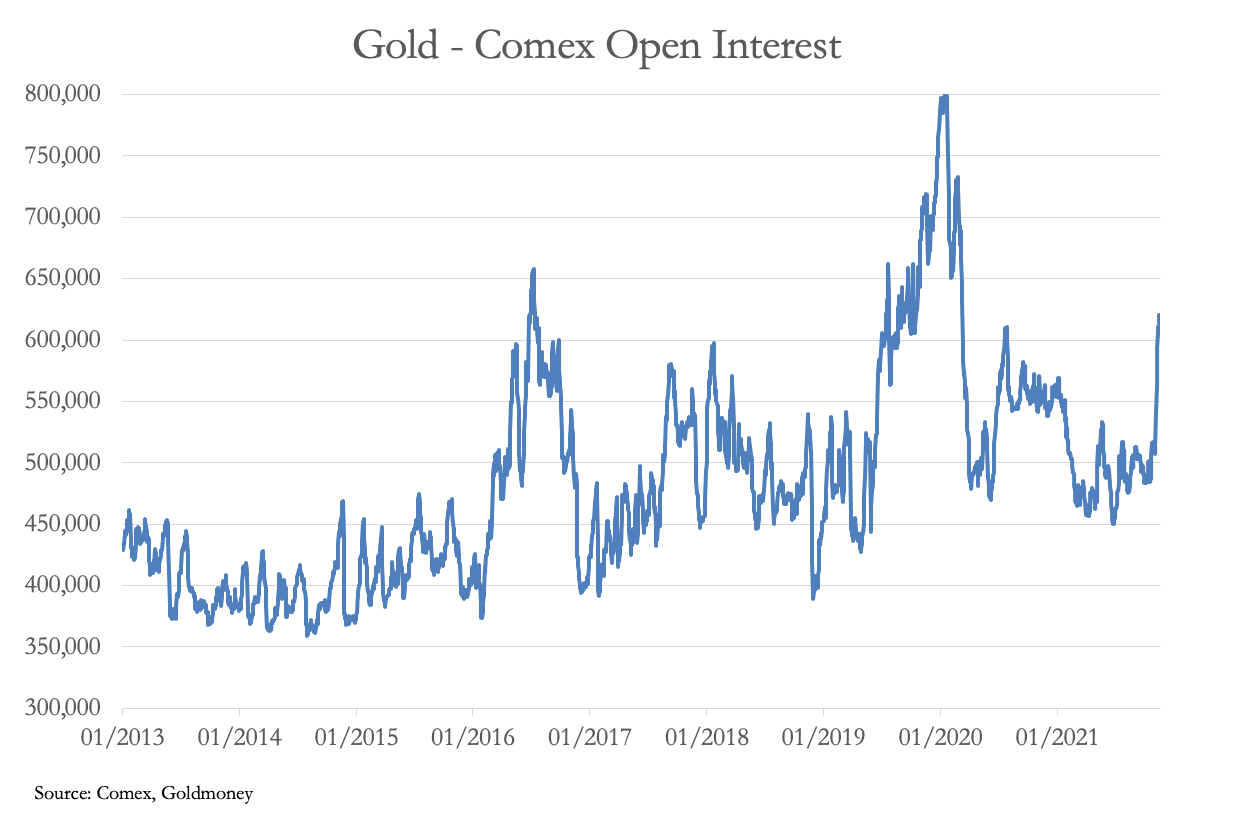 The Managed Money category, appears to be behind the increase, with the most recent Commitment of Traders Report (9 November) showing their net long position to have jumped by over 45,000 contracts, taking them into marginally overbought territory. Since then, open interest has increased a further 48,313 contracts, making these latecomers to the gold party appear vulnerable to a shakeout. It is worth noting that the expiry of the December contract will begin to influence trading from now on, with the longs deciding to either roll their positions forward or sell.

Meanwhile, the shorts will be feeling increased pressure, with their positions spiralling out of control. The next chart shows the Swap category’s short position values (mostly comprised of bullion bank trading desks) as of the last COT figures, adjusted for today’s gold price. 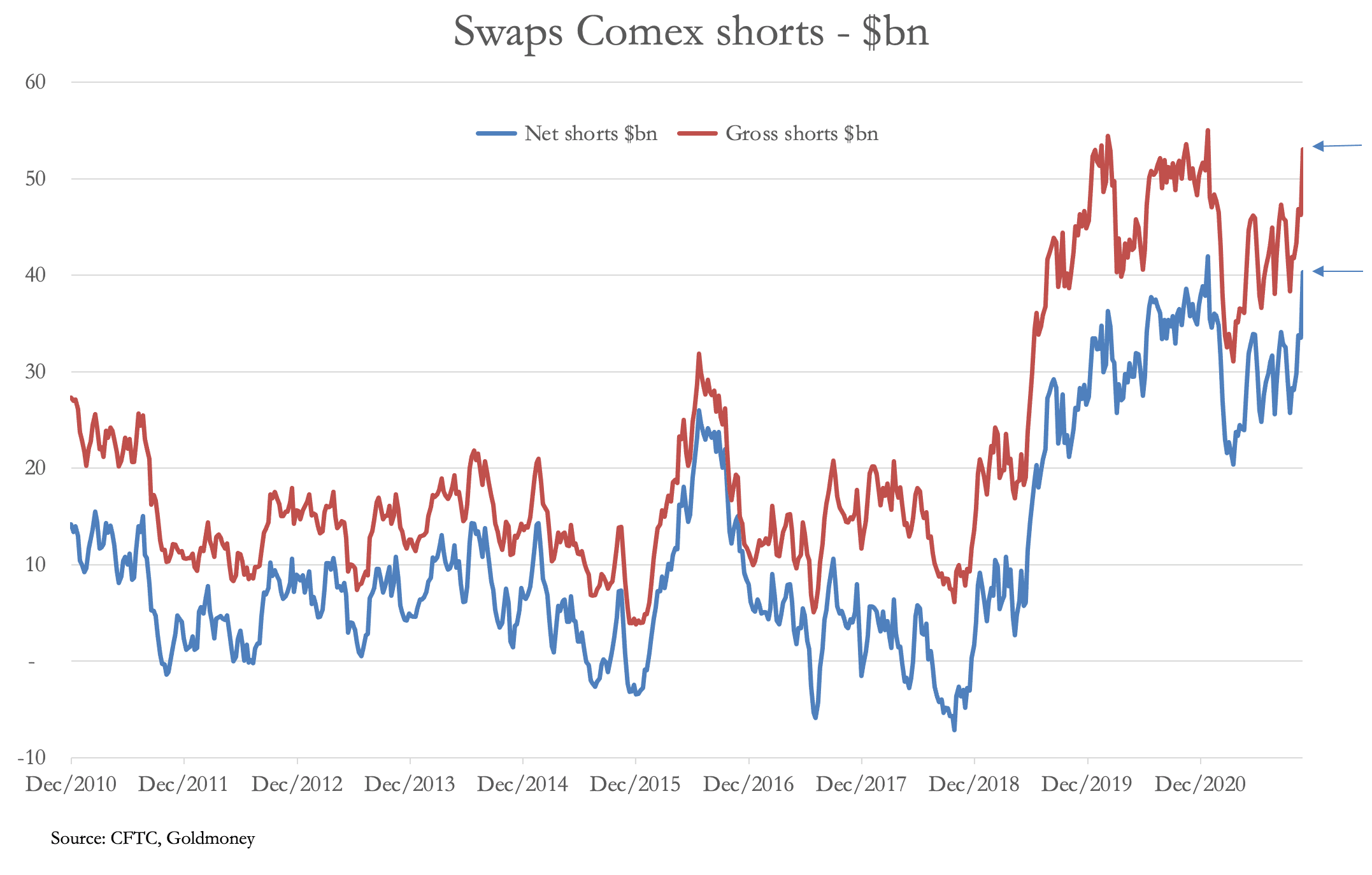 Gross and net shorts in value terms appear to be marching towards record levels (arrowed). With the increase in open interest since the last COT figures were released, it is likely that gross shorts are already nearly $60bn in value, a new record, and net shorts approaching $45bn also in record territory. We shall see some of this position revealed, but not all, in COT figures for last Tuesday, due to be released later today.

It is turning into a high stakes gamble for both sides. The technical position, described above, is bullish, as are inflation developments, with it becoming clear that a global crisis of rising prices is developing for which central banks appear to have no answer. This week, the Daily Telegraph quoted Christine Lagarde, the ECB President, as saying that a rate hike is very unlikely next year despite rising inflationary pressures. And the ECB warned of the risk of a housing market crash if interest rates are forced to rise, with worrying consequences for the over-leveraged EU banking sector.

In dollar terms a sliding euro on the back of these developments appears to be providing the gold shorts some respite, with the dollar index rising strongly, which is our next chart. 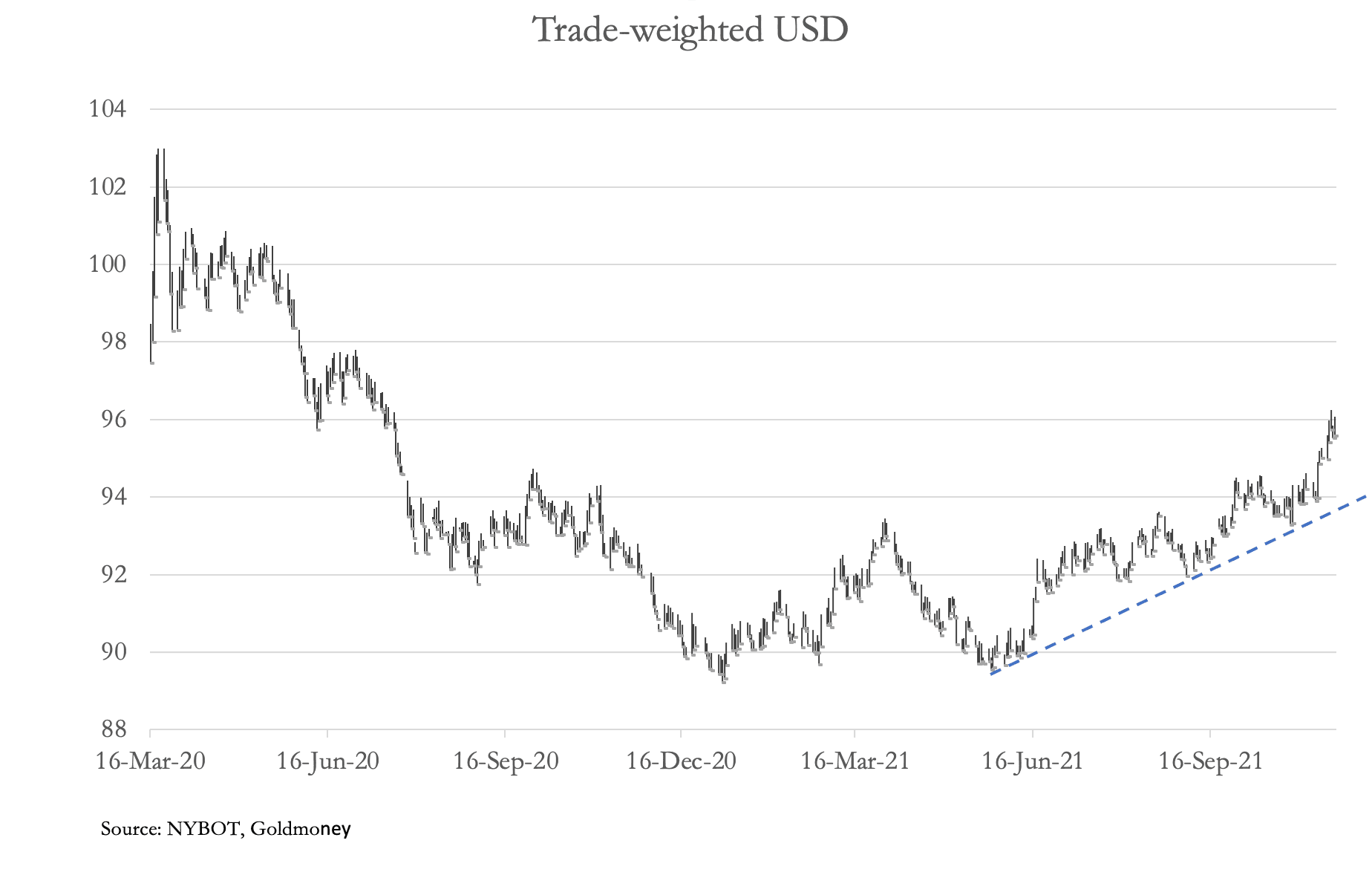 But because the rise in the dollar’s TWI does not reflect dollar strength, hedge funds are still prepared to sell dollar/buy gold. However, speculators must be prepared for attempts by the swaps to manage prices lower to take out stops and make as many call options as possible expire worthless.