Activity in precious metals this week has been extraordinarily quiet, with movements being driven by Ukraine. Last Friday it became obvious that this situation was deteriorating, so gold jumped $30 to $1305 and on Monday was up another $10. On Wednesday, when Mr Putin made some conciliatory remarks, gold fell $30 to $1287. Other than these two moves, gold simply drifted sideways in narrow ranges in the quietest conditions seen for a long time.

However, open interest in gold on Comex has been steadily building, as shown in the chart below. 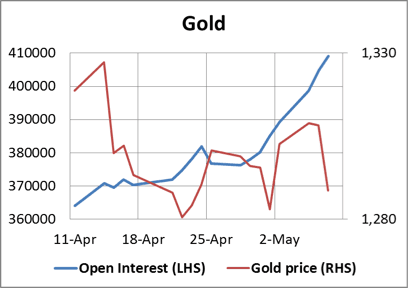 The increase appears to be mostly in swap short positions. While one can never be sure what a swap contract is offsetting, the most likely candidate is out-of-the-money puts bought by traders to protect existing and newly-opened long positions. Note how gold bottomed at $1269 on 24th April, and since then subsequent pull-backs have established a rising price trend. We can take this as an indication of underlying strength, but with so many analysts bearish one can understand the attractions of option insurance.

With silver the trend has been for open interest to contract on a falling silver price as shown in the second chart. 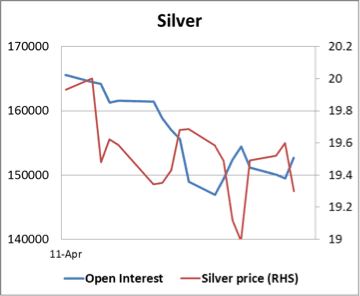 In this case the Producers and Merchants category has reduced both longs and shorts since mid-April, closing positions in the near contract (May) instead of rolling them forward. Producers are reducing their forward hedges (shorts), while on the long side as I reported last week vaulted silver has been steadily withdrawn by Merchants both on Comex and the Shanghai Futures Exchange.

In economic news, probably the most important announcement was that in March US consumer credit grew by $17.5bn, of which only $1.1bn was credit card debt, the rest being comprised of mostly student debt and car loans. Students unable to find employment are extending their education and debt instead. Take this factor out and there is no sign of the hoped-for animal spirits.

This dismal outturn was confirmed by bond yields falling yet again, confirming western economies are most likely on the edge of a new downturn. With all the money-printing going on it appears the financial system is awash with the stuff, for which there is little appetite from the real economy. By way of confirmation, Mr Draghi of the ECB has said he will ease monetary policy in June if needed (in other words he almost certainly will).

It bears repeating that with all the monetary expansion of recent years it is remarkable that the advanced economies are absorbing none of it. Ever since the Lehman crisis subsided analysts have expected economic recovery. Adjusted for true inflation, not the fictitious deflators dreamed up by government statisticians, consumption has actually declined. The problem for policy-makers is that we appear to be on the threshold of a deeper slump; in which case the mispricing of markets on zero interest rates will be brutally exposed.