That was how it felt watching all markets this week until yesterday when they sprang into life. Gold fell from $1304 at the London opening last Monday to a low point of $1281 yesterday, down 1.8% on the week, while silver fell from $20.60 to $20.35, down only 1.2%. These moves were relatively small compared with action elsewhere. Here are the charts showing price and open interest for gold and silver on Comex. 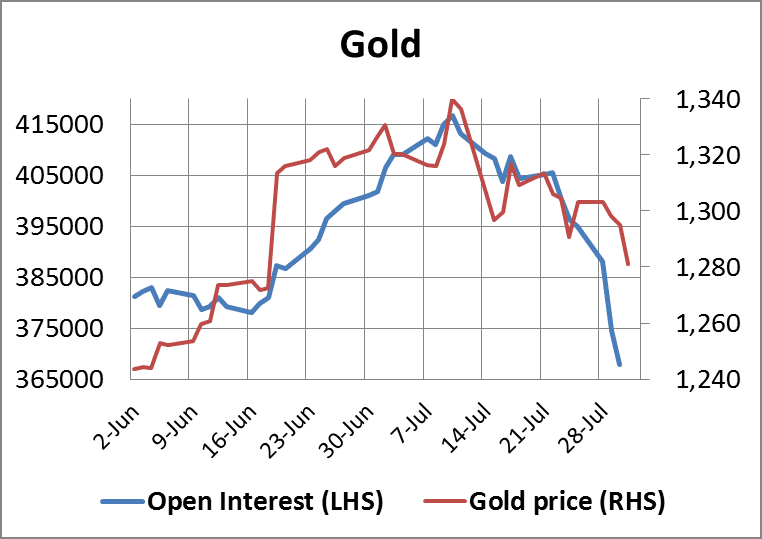 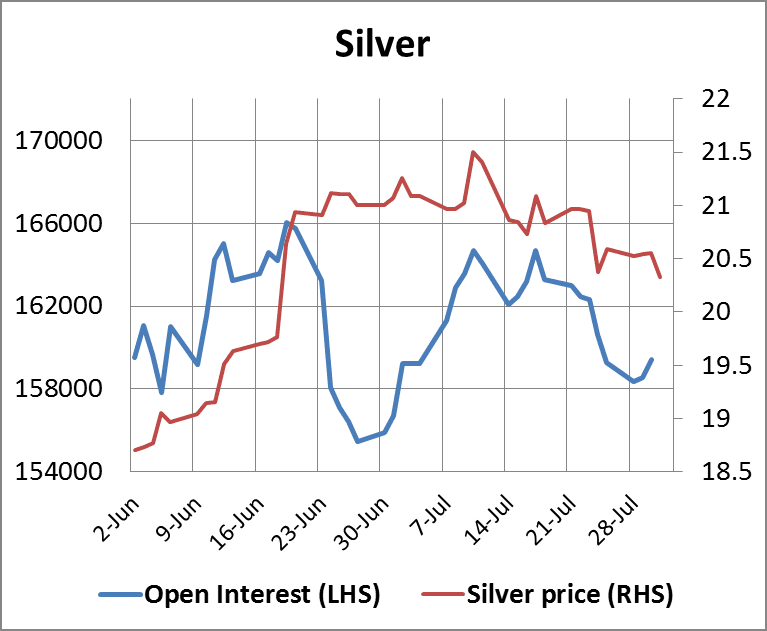 Note how Open Interest in gold has collapsed by nearly 49,000 contracts since the peak on 10th July. This is principally due to the August contract winding down, with only a portion being rolled into December. Silver's OI on the other hand has held up relatively well, and its performance relative to gold has been remarkably strong.

In both cases the swaps category, which is mostly foreign banks, has recently accumulated large short positions. It will be interesting to see to what extent these positions have been closed down when the Commitment of Traders Figures for the second half of this week are released next Friday.

The impact of these developments was dramatic, sending the dollar higher against all currencies, but most notably the yen. Bond yields rose from recent lows, and equities fell sharply with a 300-point fall on the Dow yesterday. Less rationally commodity prices fell, with WTI crude falling through the $100 level to $98. So it is hardly surprising that gold and silver were marked down along with everything else.

Much of the fall was in US trading hours, so was a paper-driven gut reaction, and coincided with end-of-the-month book-squaring. It will be interesting to see if over the course of today physical demand for precious metals returns in London at these lower prices.

We may find in retrospect that this week was pivotal. China's equities were sharply higher (up over 7% since 21 July) on recent PBOC moves to ease liquidity strains, and the Japanese yen has started falling again having failed to break the ¥101 level. This may signal a return to the yen's bear market, which would be consistent with Japan's economic fundamentals. This being the case we can expect yen carry-trades to profitably finance global bull markets for the foreseeable future. It should also rekindle Japanese demand for gold.