Mar 3, 2022·Goldmoney
Oil prices have sharply risen over the past two weeks on the back of the unfolding war in Ukraine. Prompt month Brent prices went from an already elevated $95/bbl in mid-February to $112/bbl at the time of writing. WTI, the US benchmark, is currently trading at $110/bbl.

Oil prices spiked on the events in Ukraine 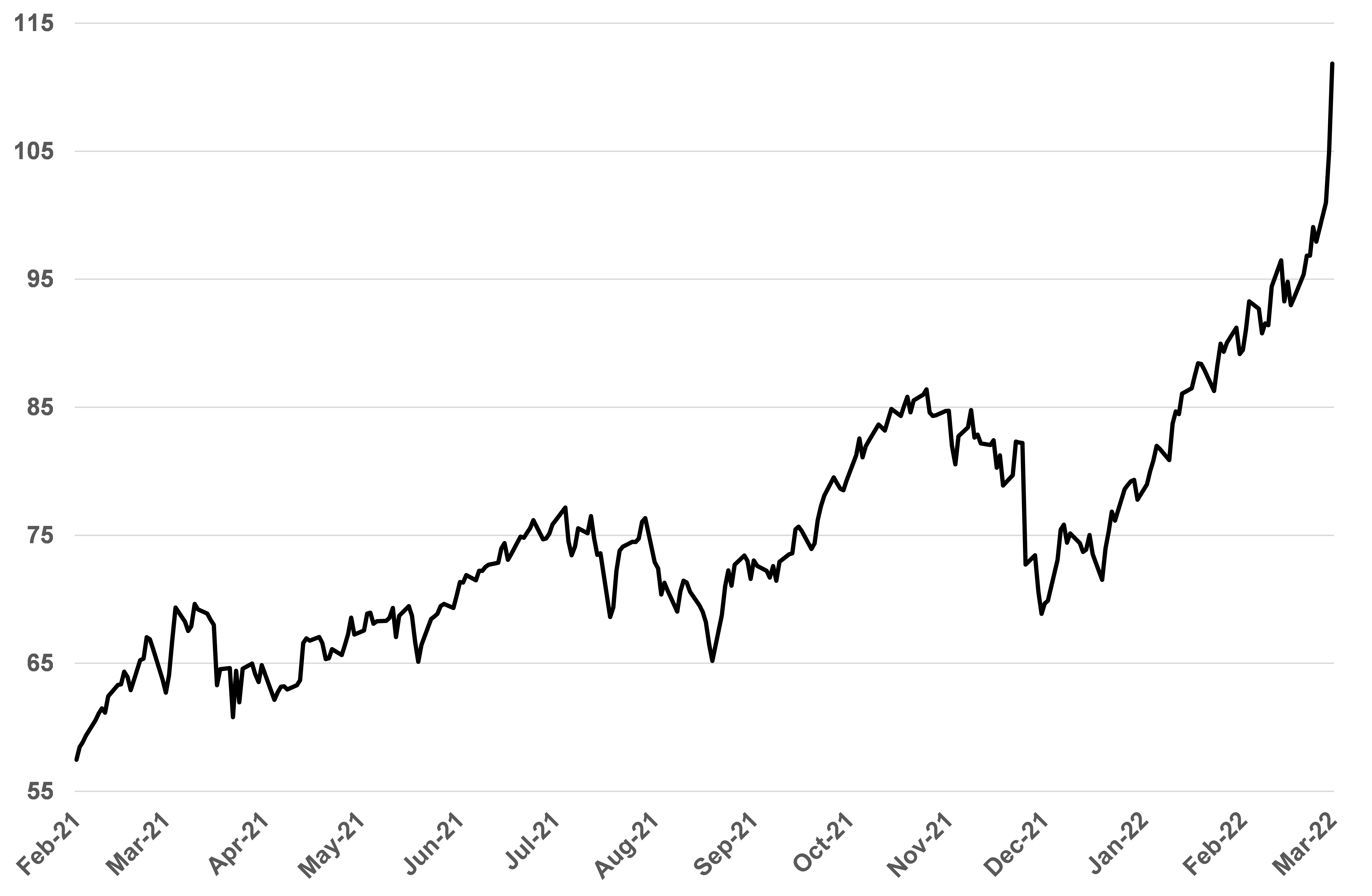 In order to understand the current price action, it’s important to look at the global oil market prior to the recent events in Ukraine. Global inventories were at an all-time high in summer 2020 as a result of unprecedented demand destruction on the back of the first wave of Covid19 lockdowns. This triggered an equally unprecedented supply response, mostly in the form of voluntary shut-ins from OPEC+, but also some involuntary shut-ins (due to economic reasons) from non-OPEC producers. This pushed the market relatively quickly into a deficit and inventories began to decline again. OPEC+ eventually started to bring back idled production, but it always keeps the market short. By early 2021, global inventories fell below the 5-year average and the market became increasingly tight.

Exhibit 2: OPEC kept the market in deficit since mid-2020, leading to a rapid depletion of inventories 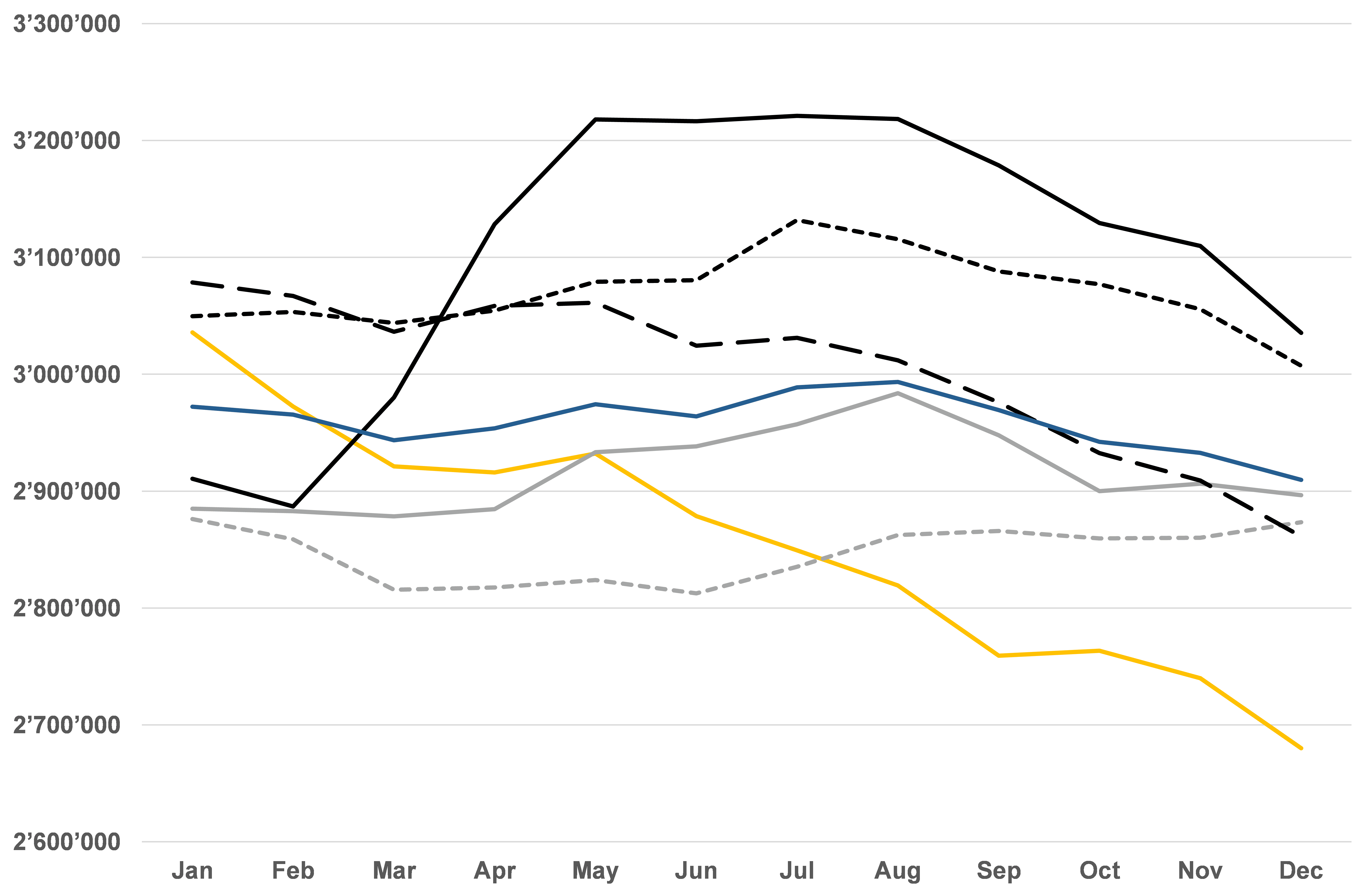 Low inventories lead to a backwardated market (prompt prices trading above forward prices) as consumers are willing to pay premiums for immediate deliveries. The backwardation in the Brent forward curve indicated an extremely tight oil market even prior to the military conflict in Ukraine. The 1-12 month time-spread was close to 15% prior to the military conflict, levels not seen since 2004.

Exhibit 3: The backwardation in crude oil was already extremely high prior to the war in Ukraine 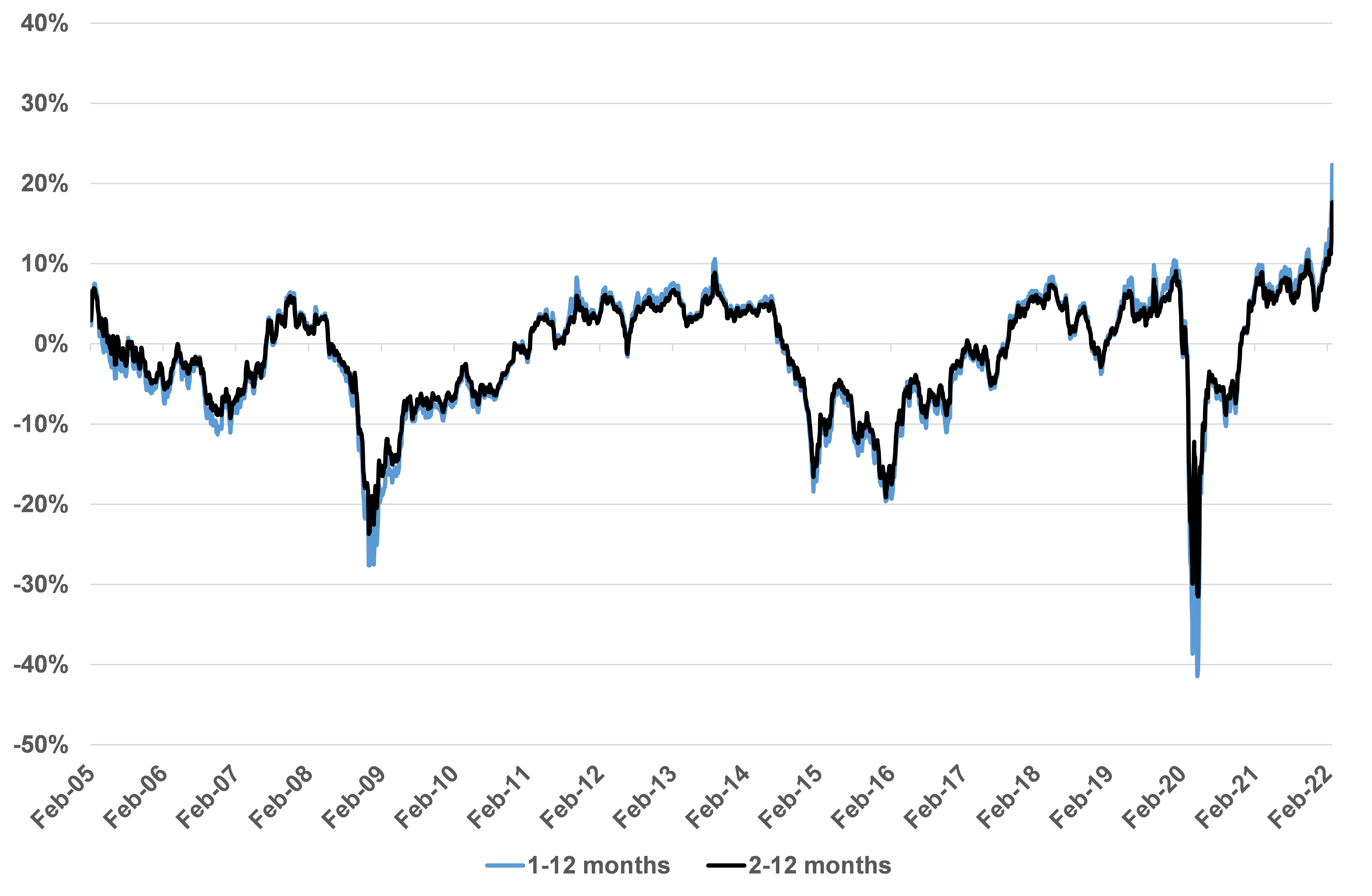 The war in Ukraine and the ensuing sanctions of Western states against Russia have further exacerbated the current oil market tightness. The US and Europe have implement a host of sanctions targeting the Russian economy and leadership. The sanctions have also targeted the energy sector. The most prominent example is the complete abandonment of the controversial Nordstream 2 pipeline. While this doesn’t change the current gas export capacity to Europe, it does fundamentally change the forward outlook. The sanctions also will impact investments into the Russian oil and gas sector going forward and new sanctions could put an outright ban on those. Several international oil and gas majors have already announced their exit from the Russian market, or at least a complete halt of new investments.

However, none of that should have an impact on immediate supply of oil and gas. Importantly, the sanctions have specifically excluded imports of Russian oil and gas. European and American companies are still free to import Russian oil. The question therefore arises why the market is pricing in much tighter near term balances.

The reason is that western companies are de facto voluntary sanctioning Russian oil and gas imports. This happens on multiple levels.

The full extent of these voluntary sanctions are currently hard to estimate. The fact is that Russia is currently the world’s second largest oil producer with an output volume just shy of 11 million b/d. The only country that produces more oil is the United States, thanks to the boom in shale oil. This means that Russia accounts for about 11% of global output. The only other country with a comparable production capacity is Saudi Arabia. 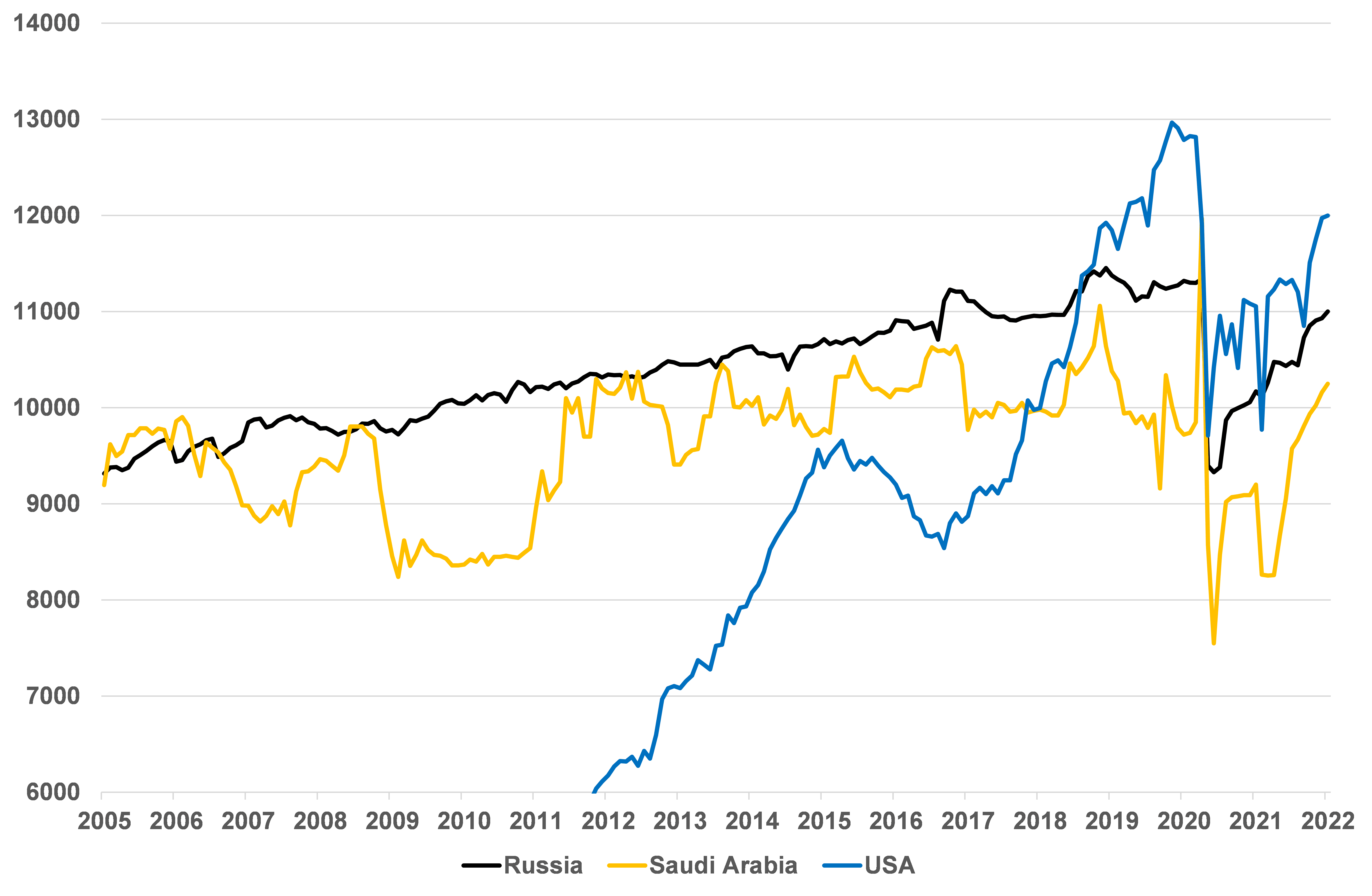 When it comes to exports, Russia is sharing the top spot with Saudi Arabia. Unlike the US, which despite being the largest producers still depends on imports, Russia and Saudi Arabia are exporting around 65-70% of their crude oil production either in raw form or as refined products.

Exhibit 5: Russia is together with Saudi Arabia the largest petroleum exporter 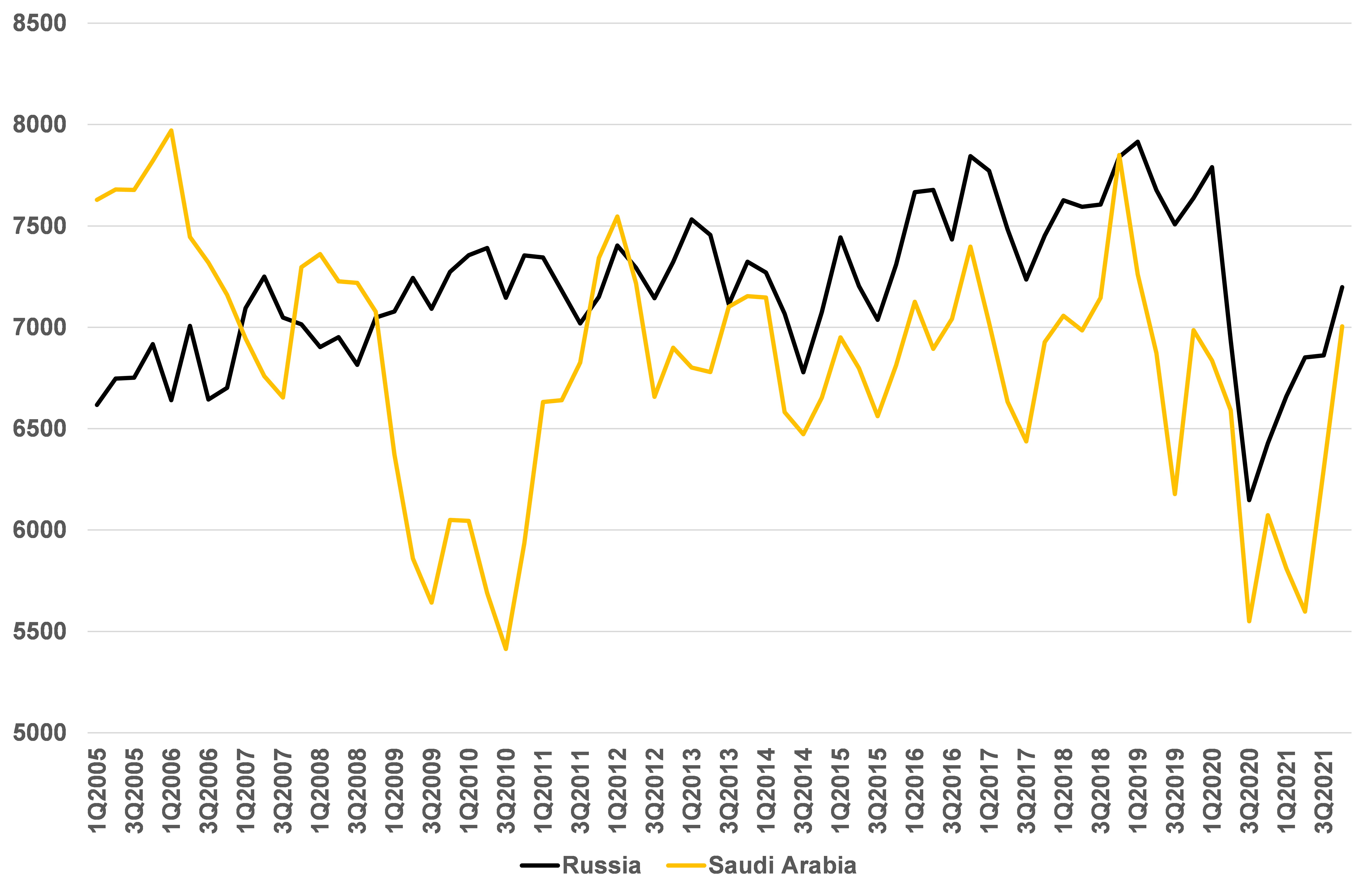 Global crude oil markets were in deficit by about 2mb/d for the past 12 months. OPEC is increasing supply every month by 400kb/d, but demand continues to recover as well as Covid19 lockdowns and travel restrictions are ending. OPEC is currently producing a bit over 28mb/d, 1.5mb/d below the 2019 average. This would indicate that there is decent spare capacity left, assuming there was also some spare capacity in 2019. However, analyzing the composition of OPEC out reveals that the more reliable core-OPEC producers (Saudi Arabia, Kuwait and UAE) are already back to 2019 levels. This means that the output of the remaining OPEC producers is down 1.5mb/d, and that is not because these members are holding back, but because their effective capacity has permanently declined. Hence, even if the voluntary sanctioning by western companies reduces just a fraction of Russian exports, it could be enough to exhaust all OPEC spare capacity and leave the market in a deficit that could only be solved by demand destruction. This would require even higher prices from here.

On top of that, there is also the specter of much more stringent import restrictions by the European Union. However, banning Russian oil and gas imports would have a tremendous consequences on prices in our view. European gas prices, already five times higher than the all-time highs prior to this winter, could easily double or triple form here, and creating widespread industrial shutdowns and power blackouts. As for oil prices, European pipeline imports could not just simply be offset by more seaborne exports or pipeline flows to china. Most of that oil would simply be missing from the global market. It would immediately push the global market in a huge deficit. This would require demand destruction on a massive scale, comparable to the oil crises in the 1970s. In this case we would expect prices rapidly exceeding the previous records of $150/bbl in 2008 and it would almost certainly trigger a global recession. We therefore think the risk for such a drastic step by the European Union is low, but not negligible.