Gold prices are up between 13% and 23% year-to-date in the major currencies. However, this upward trend started long before the recent price rally. In fact, in a majority of currencies, gold has been in a sustainable upward trend since 2014. On average, these upward trends tend to last 4.5 years with an average price increase of over well 100%. Further, as long as gold prices remain over USD1165/ozt, gold has also entered an up-trend in USD terms which, historically, has lasted more than 3 years on average and pushed gold >200% higher.

Gold prices in USD have rallied strongly in recent weeks, up 18% year-to-date. Gold prices in other currencies look similar; of the 20 most traded currencies in the world, gold is up in all of them. In the media and in finance, as with most exchange-traded commodities, gold is almost always quoted in USD. Hence, as gold prices in USD moved lower over the past year, many remained under the impression that gold was in a downtrend. However, when we look at gold priced in the 20 most traded currencies in the world, in 80% of them, gold showed a positive performance over the past two years. But does that mean gold in these currencies has resumed its long term upward trend? In order to find that out, we have created a set of intuitive rules to define inflection points at which gold prices decisively change direction. We find that in 55% of the world’s most traded currencies, gold has re-entered a clear uptrend.

Gold prices in all currencies saw their peaks somewhere in 2011. What followed then was a more or less sharp decline, but unlike for gold priced in USD, gold priced in most other currencies troughed in late 2013 to early 2014 and has been trending higher since. We find that for the world’s major currencies, uptrends tend to last about 4.5 years on average during which gold prices increase by more than 100%. 95% of the world population does not use the USD as local currency and is not paid in USD. Saving in gold has helped them to protect their wealth as their currencies resumed their long-term decay. In the end, this is the path all fiat currencies follow as their purchasing power declines. Gold is the only money that has held its purchasing power over time. Indeed it is the only money that has survived throughout history.

While the USD and a few other currencies have so far been the outliers, prices have reversed sharply as well. Applying our set of rules to the USD, we find that gold has entered an uptrend as well as long as prices remain above $1165/ozt, roughly USD100/ozt below current levels. Historically USD gold uptrends lasted over three years and pushed gold prices up more than 200%. 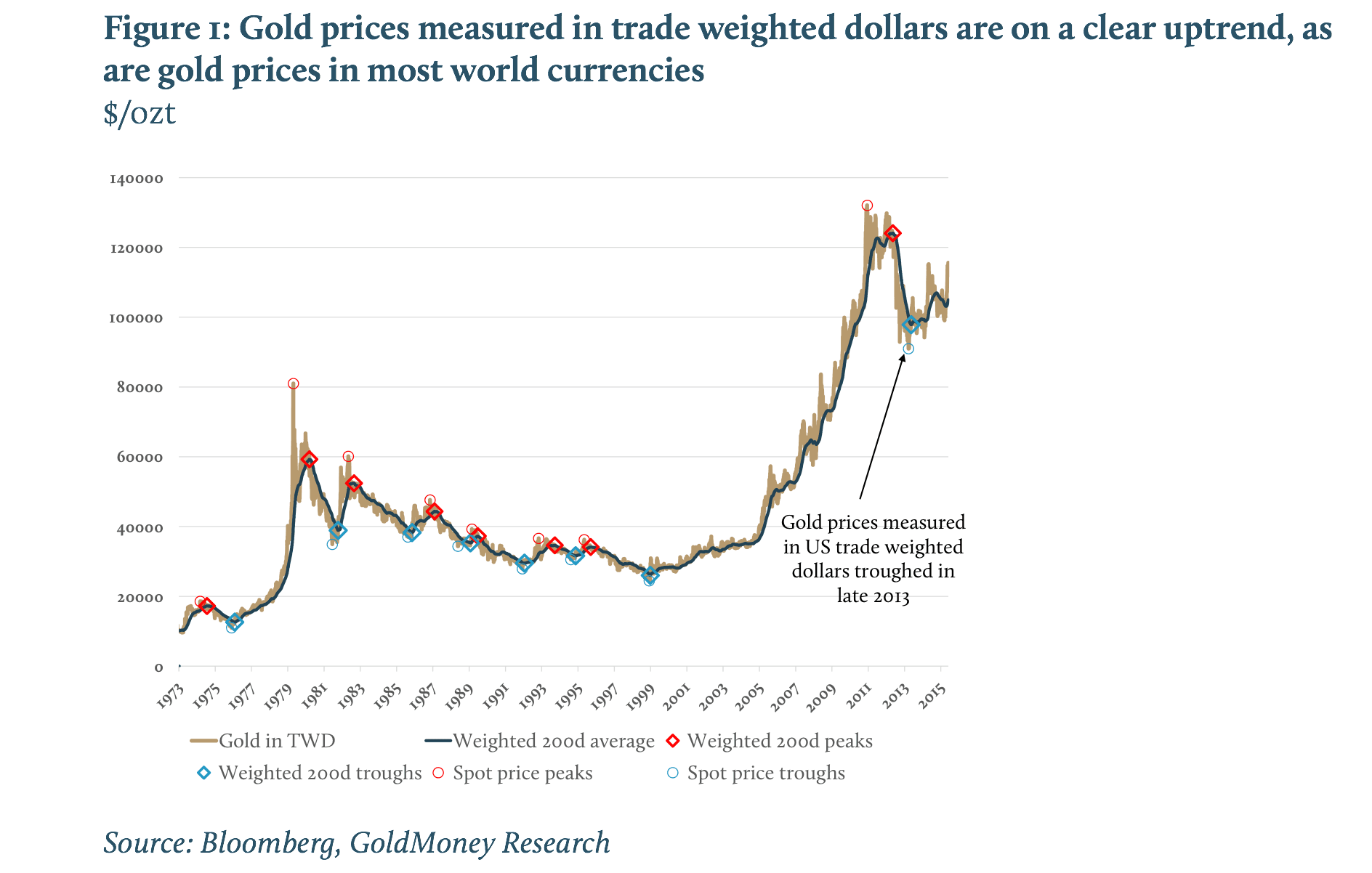 Gold prices rallied strongly in recent weeks in all major currencies. In the 20 most traded currencies, gold is up between 13% and 23%year-to-date (see Figure 2). Unprecedented central bank action had pushed gold priced in USD to an all-time high in 2011 but since then gold prices trended down as longer dated energy prices moved sharply lower and USD real interest rates have recovered from negative levels. (We explain how longer-dated energy prices and real interest rates affect gold prices here.) In the media and in finance, as with most commodities, gold is almost always quoted in USD. Hence, as gold prices in USD have moved lower over the past year, many remained under the impression that gold was in a downtrend. However, a quick analysis of the year-over-year performance in gold shows that this view is not warranted (see Figure 2). Last year, gold was flat or up in half of the 20 most traded currencies in the world. And it’s up with double digit returns in all of them so far this year. 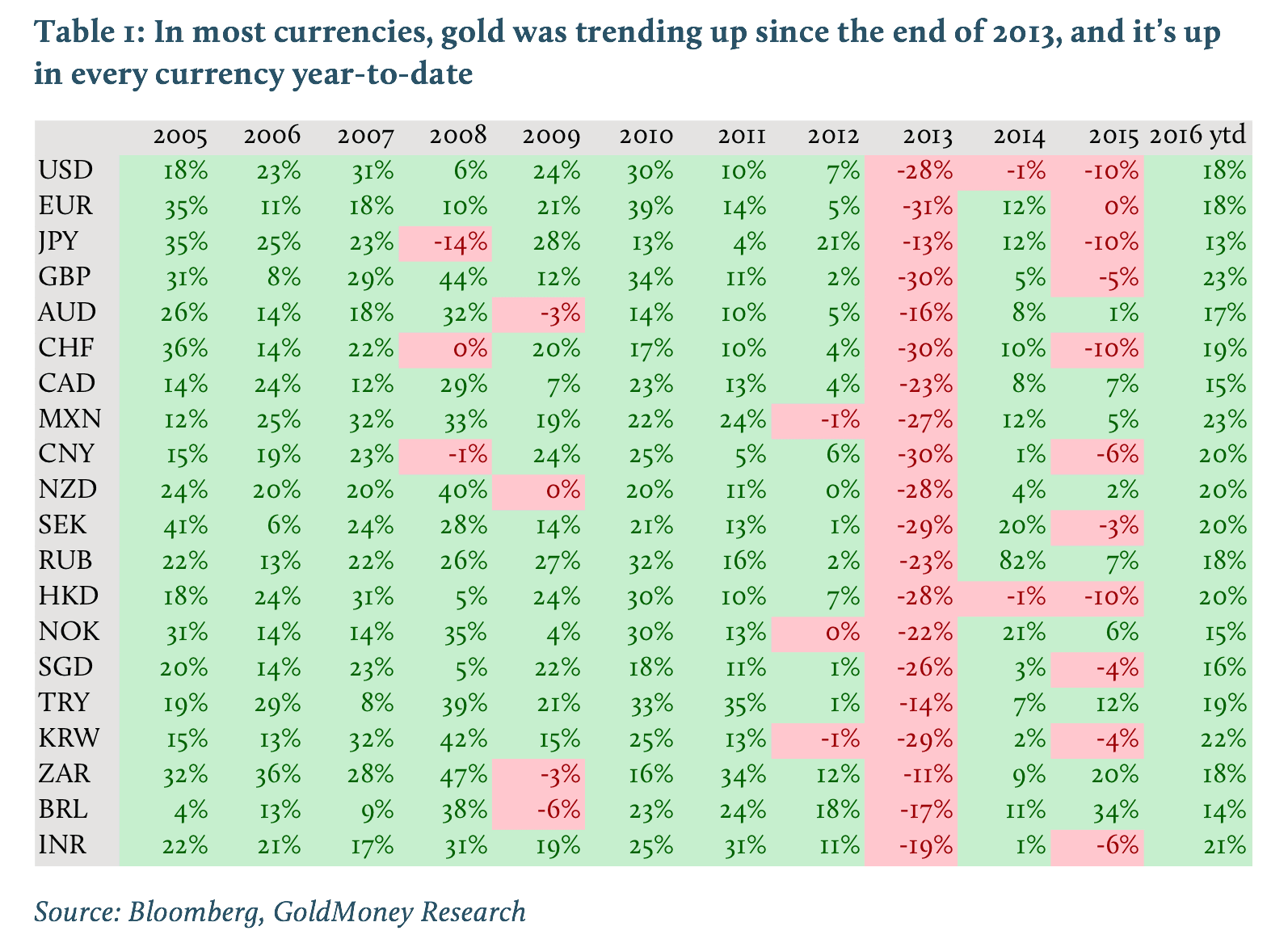 The first rule simply says that the inflection point (the point where gold ceases to be in a downward trend and enters an upward trend or vice versa) is where the 200-day weighted moving changes direction, from down to up or up to down. What is the 200 day weighted moving average and why are we not simply using spot prices? The 200 day weighted moving average is the average price of gold in a currency over the past 200 days, where the last day is weighted with 1, the day before with 1-1/200 and so forth. The advantage of the 200-day weighted moving average of a price is that the price history is much smoother than just the daily price. Daily prices tend to be volatile and change direction all the time. Hence over the analyzed period of 45 years since 1971, we could not positively identify long term trends as there would be thousands of inflection points.

But even with the 200-day weighted moving average, there will be some shorter periods where the curve changes direction without establishing a clear trend change. That is where the second rule comes into effect: An inflection point is only confirmed when the performance of the 200-day weighted average exceeds 5% (or -5% respectively) in the new direction. In a nutshell, we define the local extrema where prices move in one direction for at least 5% until the next local extrema.

This rule allows us to identify clear and sustainable trends. Once gold prices in a particular currency have entered an upward trend, these trends tend to last for several years.

Before we show the results for all currencies we take a closer look at gold in USD. The results for the USD are presented in figure 3. There have been eight upward trends and eight downward trends since 1971. The average trend lasted around 2.9 years where up-trend lasted slightly longer than the average down-trends. The average uptrend yielded a performance of 207%, the average down move a performance of -39% measured by the 200-day weighted moving average. Despite the recent rally, it is still too early to determine whether gold in USD has re-entered an uptrend. Should gold prices not drop below USD1165/ozt over the coming months (almost USD100/ozt below current levels), a new uptrend will be confirmed. 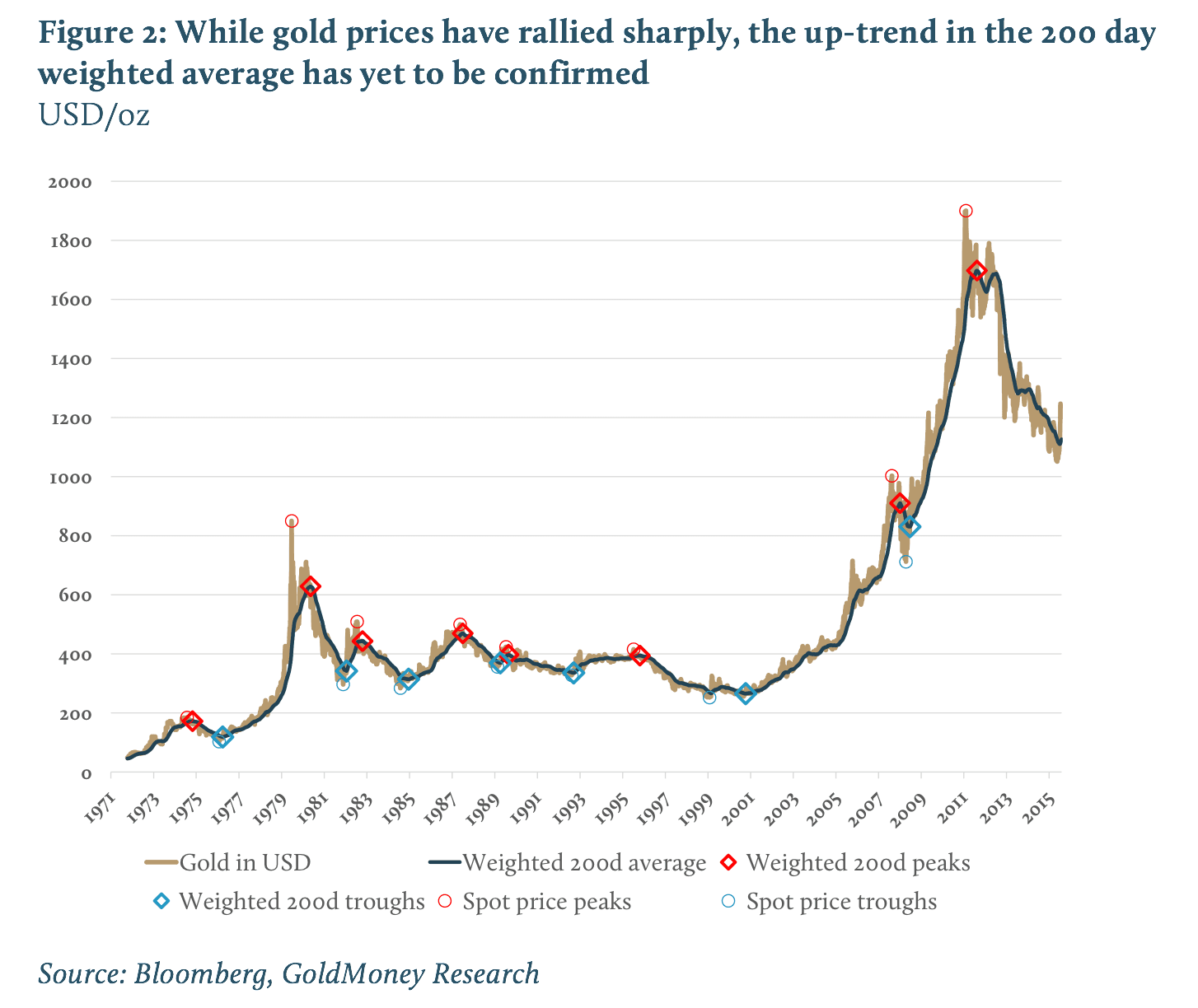 For other currencies the case is much more decisive. In euros for example, the 200-day weighted average made a low in June 2014. The respective trough in the spot price was in December 2013. Since then prices moved up 33%. The picture is similar for gold priced in Canadian dollars, where prices are up 34% since the low in 2013. If historical performance is a good indicator, these trends will continue to last for another two years and should push gold prices substantially higher. 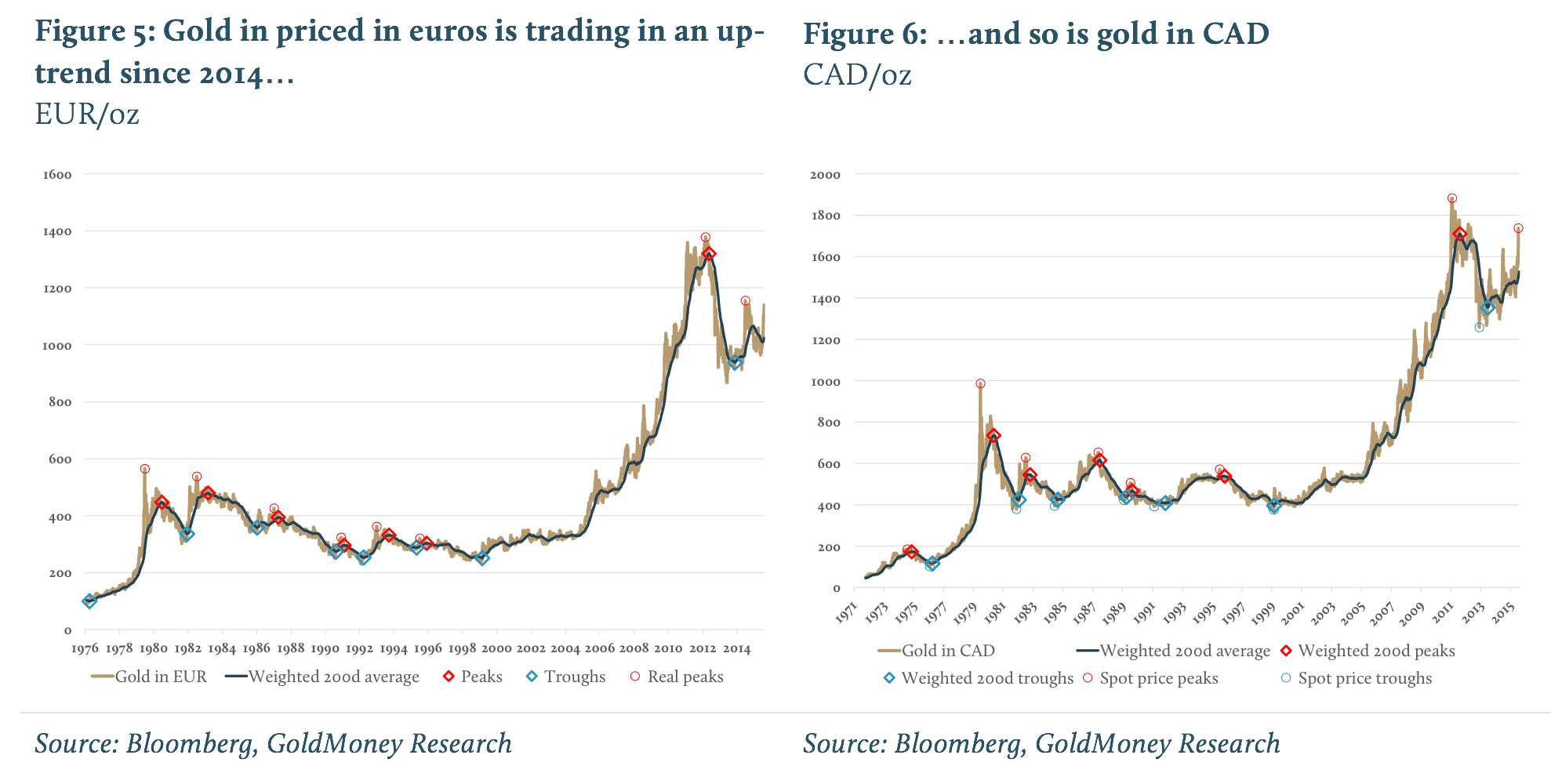 Applying these rules to the 20 major world currencies (20 most traded currencies according to the Bank of International Settlements), 55% are now thoroughly in an uptrend (see Table 1). Of those currencies where gold is still trending down, both the Hong Kong dollar and the Chinese yuan are quasi pegged to the USD, so that shouldn’t come as a surprise. Excluding those shows that in 2/3 of the world’s major currencies, gold is in a sustainable up-trend. Table 1 shows how gold in the 20 most traded currencies has performed through the up- and down-cycles since 1971 (some currencies with smaller price history show shorter time-frames). On average there were eight up- and seven down-trends. The up-trends lasted 4.5 years on average, the downtrends only two years. Gold prices in their respective currencies were up anywhere from 133% to several thousand % on average during an up-cycle, but only down between -24% and -40%. 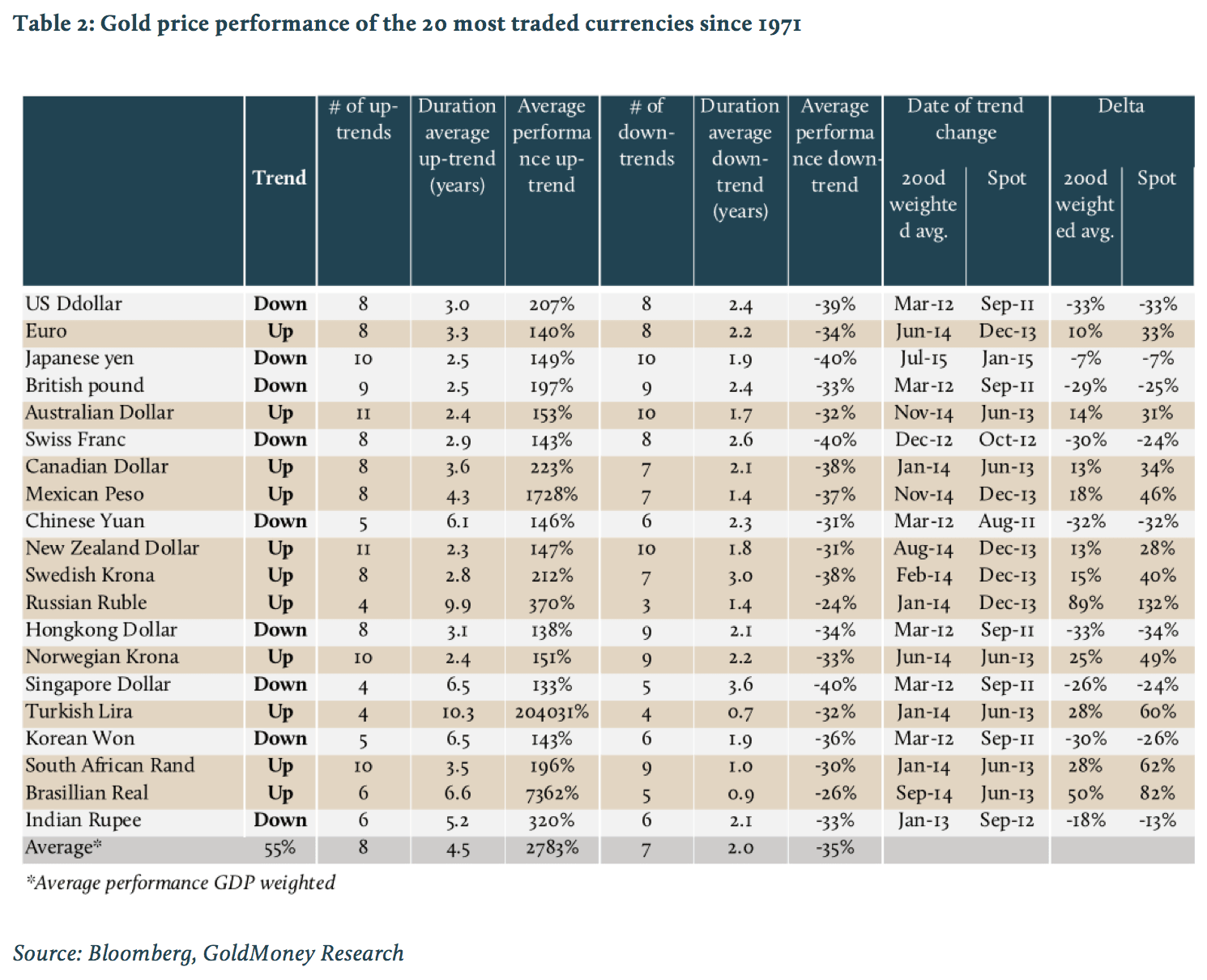 Gold has undoubtedly been a better store of value than any currency over any prolonged period in modern history. After the sharp price rise in the aftermath of the 2008-09 credit crisis, gold prices in all currencies went through a period of consolidation. We believe, this was partly because gold prices overshot to the upside and had to correct. In addition, the sharp decline in energy prices has created negative headwinds for gold prices in all currencies. These headwinds seem to be mostly behind us as longer-dated energy prices have now reached unsustainable levels. (See our previous report on this topic here.)

Gold prices in most currencies have thus resumed their long term upward trend. 95% of the world population does not use the USD and is not paid in USD. Saving in gold has helped them to protect their wealth as their currencies resumed their long term decay. In the end, this is the path all fiat currencies go as their purchasing power inevitably declines. Gold is the only money that has held its purchasing power over long periods of time and indeed is the only currency to have survived through history.

The USD and some USD-pegged currencies have been the standouts of late as they appreciated vs other currencies as well as gold for the past few years. However, with gold prices now firmly higher, gold in USD has likely re-entered the uptrend as well. Our historical analysis implies there is much more upside still ahead.