Index Trackers and their effect on gold and silver futures

There are two main indices tracked by commodity tracker funds: the S&P-Goldman Sachs Commodities Index and the Dow Jones UBS Commodities Index. According to S&P Indices (which manages both), total assets estimated at $155bn track these two indices, of which $75bn tracks the former, and the balance of $80bn the latter. Both indices are rebalanced in the first two weeks of January starting last Wednesday, and according to an S&P press release, this will lead to $1.1bn extra being invested in gold contracts.

The two indices have very different weightings because the S&P-GSCI is heavily weighted in favour of energy. On the information available my estimates of the weightings are as follows. 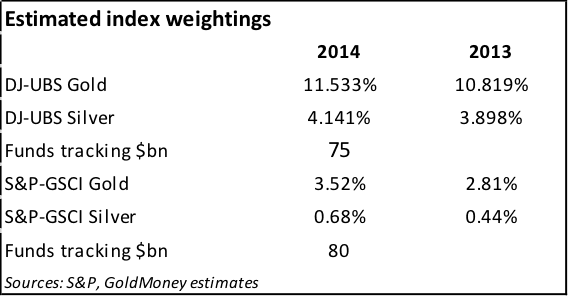 Note: S&P-GSCI gold weightings for 2014 are extrapolated from reference weightings in 2013 at an additional 0.71%, the rate implied in S&P's announcement on 8th January and similar to that of the DJ-UBS index. This contradicts an earlier announcement on 7th November that the allocation rate would be essentially unchanged for this index. Given that the allocation increase for gold is now confirmed at the same rate as for the DJ-UBS, the S&P-GCSI silver allocation for 2014 has been assumed to be at the same rate as for the DJ-UBS as well.

This translates into an extra 9,200 Comex gold contracts and 3,845 silver contracts. Given the low level of open interest on this market these increases can be expected to have some impact as the rebalancing exercise works through five business sessions starting on Wednesday 8th January.

However, much more serious is the calculation that on the new weightings these two indices are responsible for long positions on Comex (assuming for the moment this is where all the exposure ends up) totalling some 95,555 gold and 37,476 silver contracts including the rebalanced extras. In the Managed Money category, where these positions should be recorded, gold longs on 31 December amounted to 96,000 contracts, and in silver 31,800. So nearly all the Managed Money gold longs in the market bar 450 contracts are theoretically passive investments and silver's actually exceeds Managed Money longs by a significant margin. So on the long side of this category there are no bullish speculative bets at all.

It is likely though that some of this exposure will be covered through forwards on the London market. Nevertheless, these longs exist, and there are bound to be other passive derivatives replicating custom and other indices, suggesting we are using conservative estimates.

Therefore, assessing the likely impact of these passive longs on Comex throws a new light on the record level of Managed Money short positions, making them more extreme and dangerous than is generally recognised, not least by the shorts themselves. There are simply very few genuine bull positions in this category at all and therefore minimal liquidity for the bears to close into.

These shorts are also in competition with the bullion banks, which with only one or two notable exceptions in the gold market are also running illiquid short positions. As for silver, even the largest bullion banks have been unable to close their shorts, with the eight largest still needing 45,000 contracts (225,000,000 ounces, or about 30% of global mine production).

In summary, a potentially vicious bear trap is now set in both precious metals on Comex, and unless some liquidity can be whistled up from elsewhere it is difficult to see how this dangerous situation will be reconciled once the traps are triggered without some serious injury for the bears.