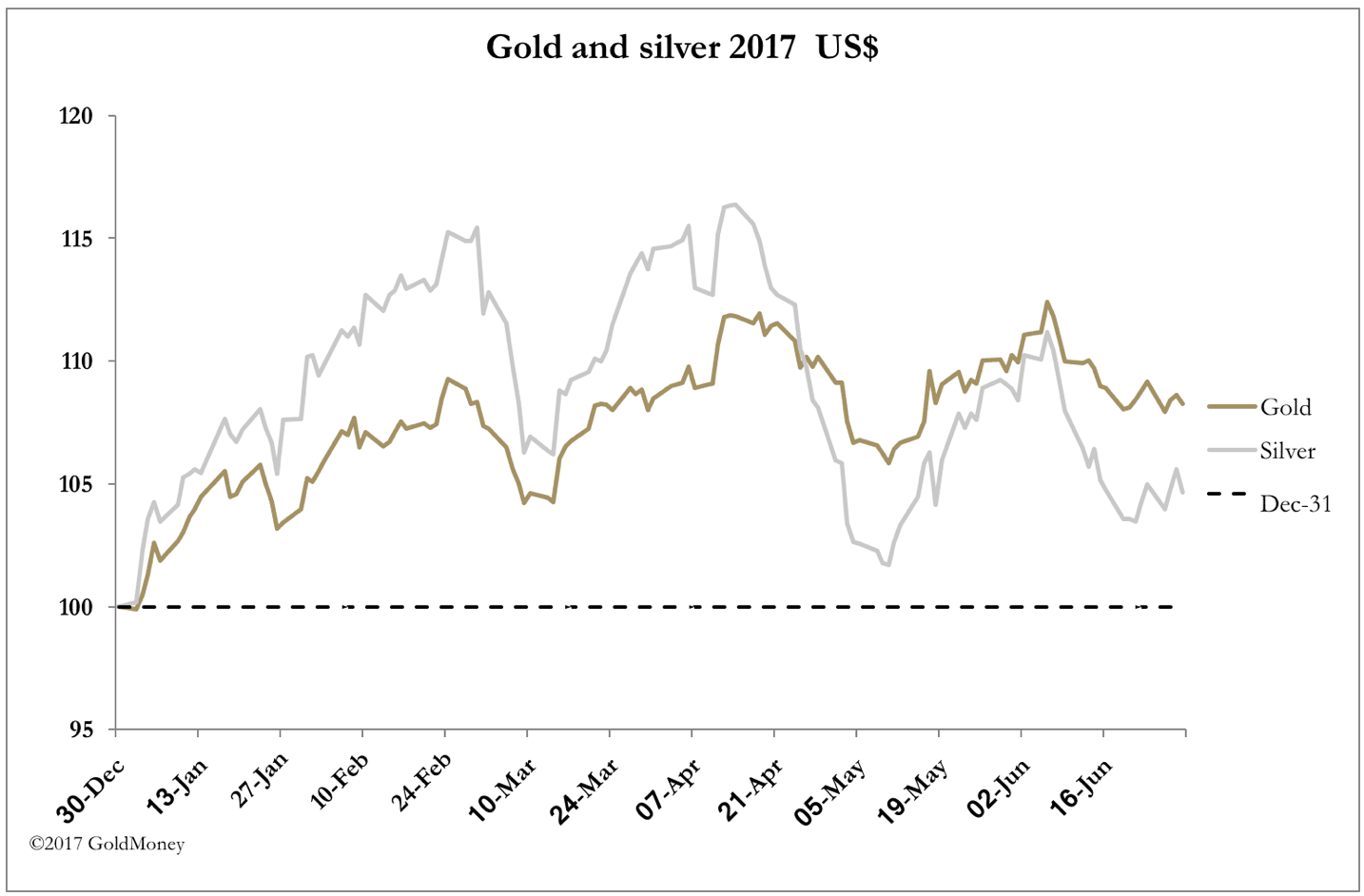 Gold and silver prices were hit on Monday by a $2bn sale of Comex gold futures at about 0400 hrs EST, when US traders were not around to challenge it. Rumours of a “fat finger” appear wide of the mark. More likely it was a too-big-to-fail bank taking out all the stops to window-dress its books ahead of the half-year accounting deadline.

Derivative markets in gold and silver are generally directionless, so it is a good time for this sort of operation. Consequently, gold is down $13 from last Friday’s close, and silver off about five cents, in early European trade this morning (Friday). Since 31st December, gold is up 8.25% and silver 4.65%. Silver’s underperformance is notable, though it appears to be finding a base.

It is time to look at gold priced in the major currencies, which is our next chart. 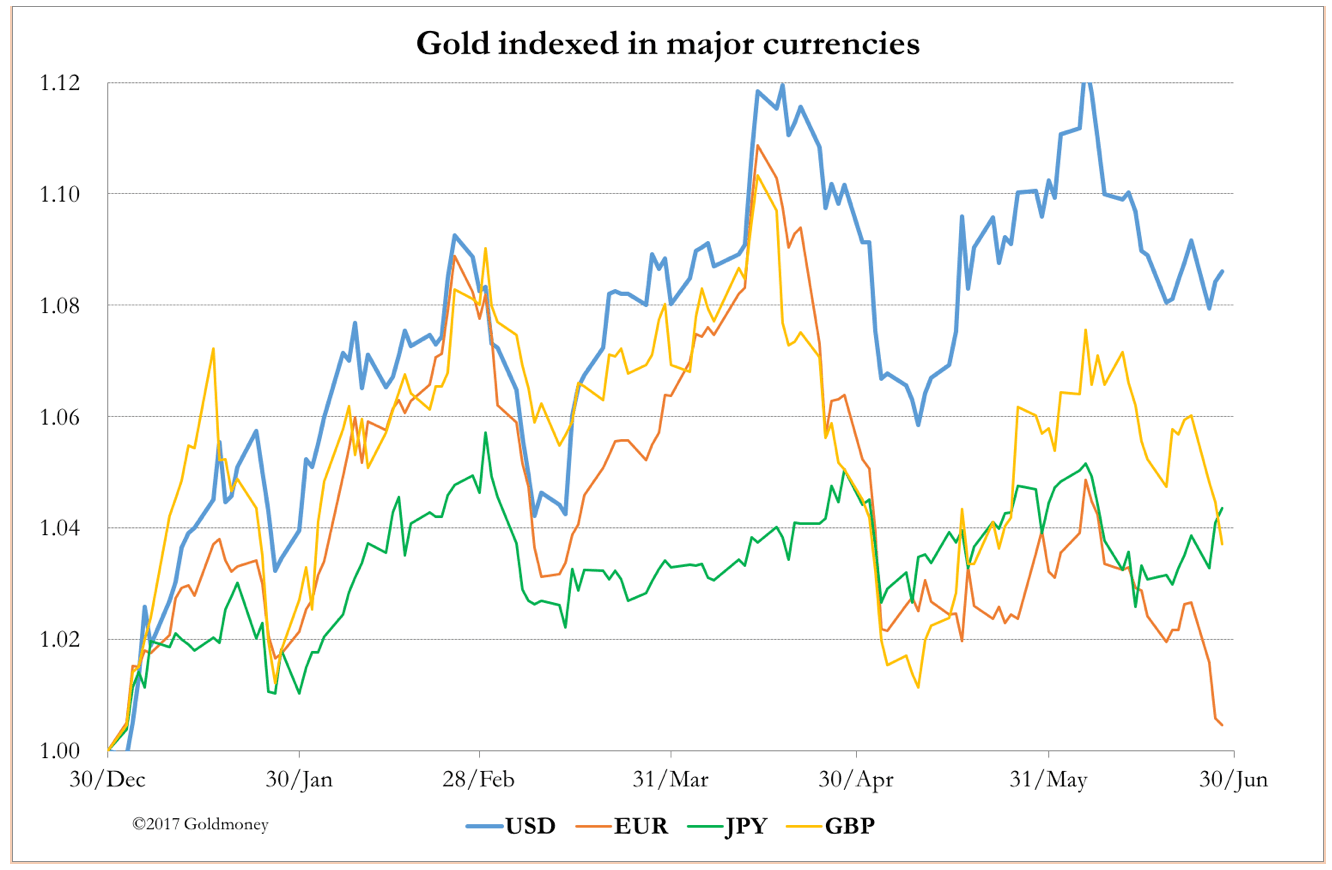 This chart exposes the relative weakness of the dollar, because the performance of the gold price in the other currencies has been more disappointing. Priced in euros, gold is up only 1%, and in sterling and yen, less than 5%. While global physical ETF holdings have remained generally stable (meaning the public are holding their positions) there can be little doubt that public interest in Europe, the UK and Japan is subdued.

That may be about to change. Recently, year and half-year ends have proved to be turning points. They are also the time when accounts are made up, and traders’ bonuses calculated, which is almost certainly why markets have been weak ahead of the event, recovering afterwards. Importantly, for Asian value buyers this half-year effect and dollar weakness means gold is now up less than 5% in Indian rupees, and up only 5.4% in Chinese yuan. Besides central bank buying, physical demand from these important sources appears to be putting a floor under the gold price.

A separate consideration is what is happening in base metals. Earlier this year, the Chinese authorities decided to take out the investment funds (aka wealth management products) which were front-running the state’s purchases of industrial materials. Copper, the bell-weather for industrial demand, had run up sharply to $2.74 per pound before the State intervened in February, falling to as low as $2.48 in mid-May. Since then, WMPs have been absent from the market, and under the influence of dollar weakness, the copper price has recovered back to $2.68.

This indicates that China’s deliberate attack on Chinese speculators, who were creating bubbles, has generally succeeded and is behind us (we must reserve judgement on crypto-currencies), and state buying programmes aimed at stocking up for infrastructure spending in both China and for the Silk Road projects has resumed. Aluminium, lead, nickel and zinc are all confirming copper’s improving trend.

These developments could be giving some relative support to the silver price, as dealers note firming base metal prices. In any event, silver appears under-priced, with the gold-silver ratio back up at 74.8. This is our last chart. 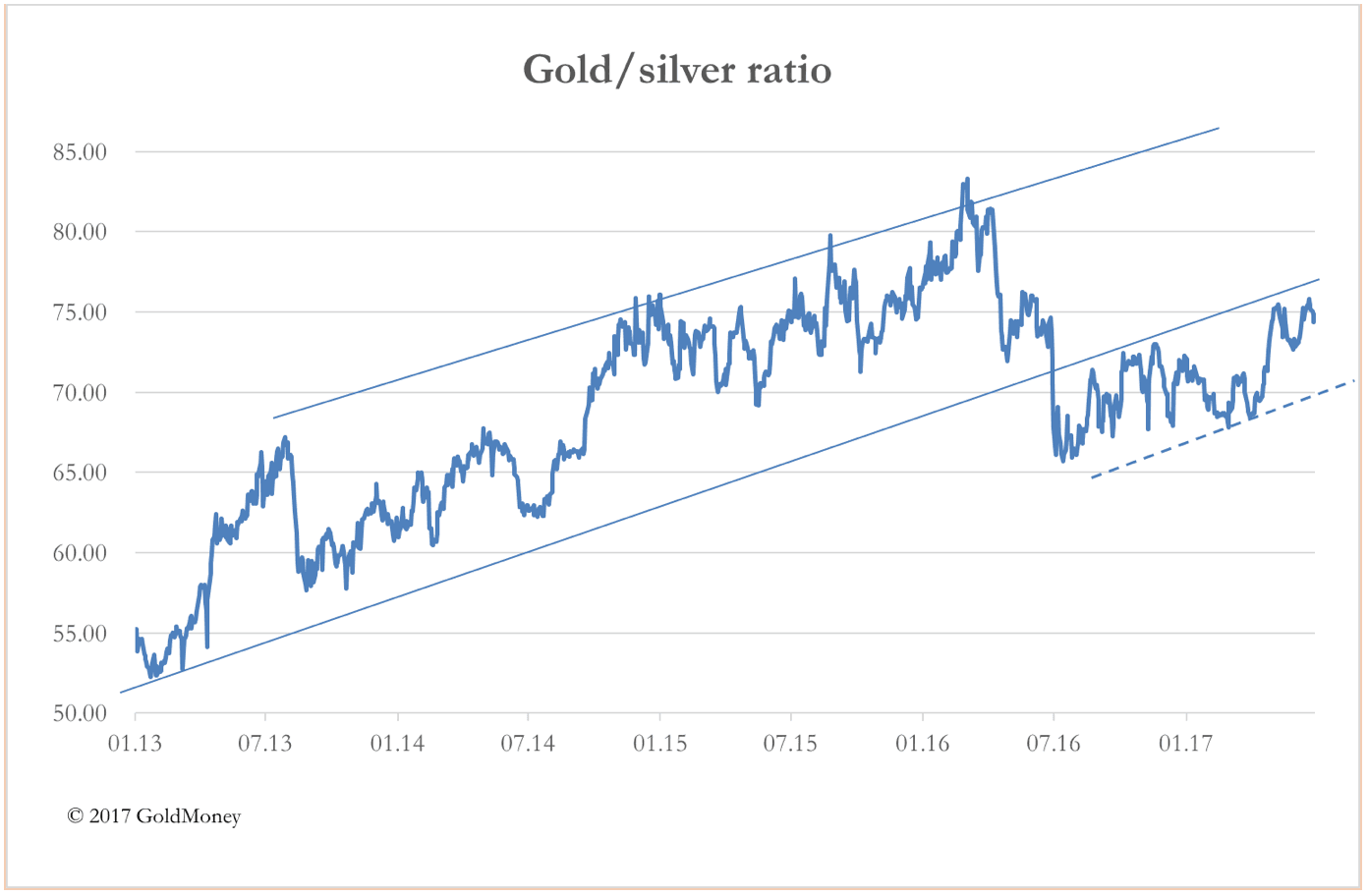