In the Referendum of the United Kingdom's membership of the European Union, 52% voted for leave, causing shockwaves through financial markets and a rally in gold. Using our gold price framework, we look at the impact on the price drivers for gold going forward.

Against the latest polls before the referendum, and seemingly against the expectations of the City and financial markets in general, nearly 52% of the UK voters voted to leave the European Union. This has come as a massive shock to the markets, with the GBP down 8.4% at the time of writing (over 10% at some point overnight), and equity and commodity markets crashing. Gold began to rally immediately after the first results revealed that the share of leave voters have been hugely underestimated and has rallied to USD1324/ozt, a 13.6% % gain against the GBP.

While only time will tell what the eventual economic implications will be, one thing is already for sure: The reality of BREXIT is shaking financial markets at the core. Asian and European equity markets closed with huge losses, commodity prices tumbled and currency markets are in disarray. We haven’t seen market moves like this since the credit crisis.

In this report we outline what the result of the vote means for gold prices going forward, using our proprietary gold price framework we have introduced last year (see Gold Price Framework Vol. 1: Price Model, October 8, 2015).

In our model we have identified three main drivers for the price of gold: Real-interest rates, central bank policy and longer-dated energy prices. In our view BREXIT will have an impact on all 3 drivers in a positive way, adding support to gold prices going forward.

As a reaction to the result, central banks will likely adopt much more dovish policies. The enormous volatility caused by the vote shows that markets have been in a very fragile state all along. This means that the likelihood that the FED will be able to raise rates in July has vanished in our view and the outlook for further hikes in 2016 and 2017 is now at risk. We have long argued that the FED will have a hard time raising rates to their desired target of 3.25% at the end of the cycle (which still is well below historical norm). Depending on the severity of the market reaction to the outcome of the vote over the coming weeks, it could well be that the FED will not be able to raise rates any further. Real-interest rates already began to price this in, dropping to the lowest levels since 2013 and at the brink to falling into negative territory again. As a result, gold prices shot up sharply (see Figure 1). 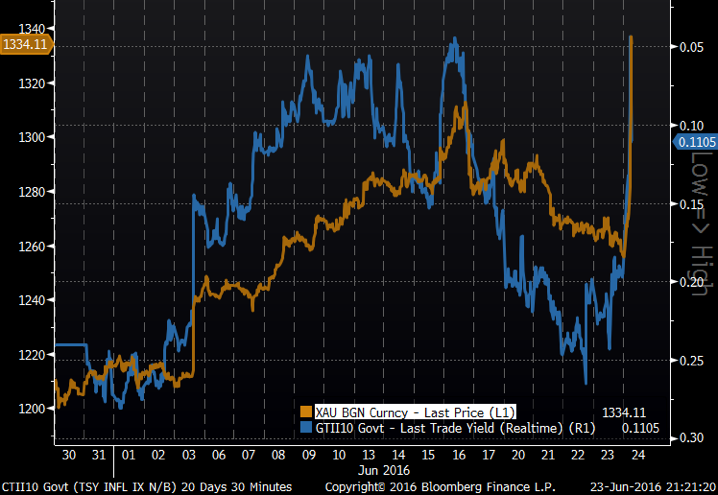 But real-interest rates are unlikely to stop here. Before the recovery from -0.9% in 2012 back to +0.8% by the end of 2015, real-interest rates had been in a steady downward trend for 30 years. Even if the FED had succeeded raising rates again to 3.25% while maintaining inflation at 2%, realized real-interest rates would have only reached 1.25% at the peak. Any monetary policy reaction to a renewed economic recession would have inevitably pushed rates into negative territory again and to new lows. With the outcome of the referendum however, it has become very unlikely in our view that the FED can raise rates anytime soon, meaning that interest rates will be much lower at the beginning of the next economic downturn. There is now a distinct chance that they will not be higher than they are right now at 0.375%. This means that real-interest rates will most likely make new lows during the next down-cycle. It also means that the biggest risk to the gold price, a meaningful increase in the FED funds rate, is much less likely. Hence the referendum has set a floor on the price in our view.

The immediate impact of the vote was that energy prices sold off hard. But it was mainly spot prices that go hit while longer dated prices haven’t meaningfully sold off. The reason is that speculative positions in WTI and Brent were close to all-time highs before the vote (see Figure 2). These positions tend to be in the front of the curve and have pushed time-spreads well beyond what is currently warranted by inventories (see Something’s got to give in the oil market, May 3, 2016). The leave vote caused massive sell-off in risky assets, and naturally oil was hit too with front end prices down 6% overnight.

Figure 2: As speculative positions in oil where near all-time highs, front-end prices sold off sharply with the general market sell-off after the vote
Million barrels, WTI (LHS), Brent (RHS) 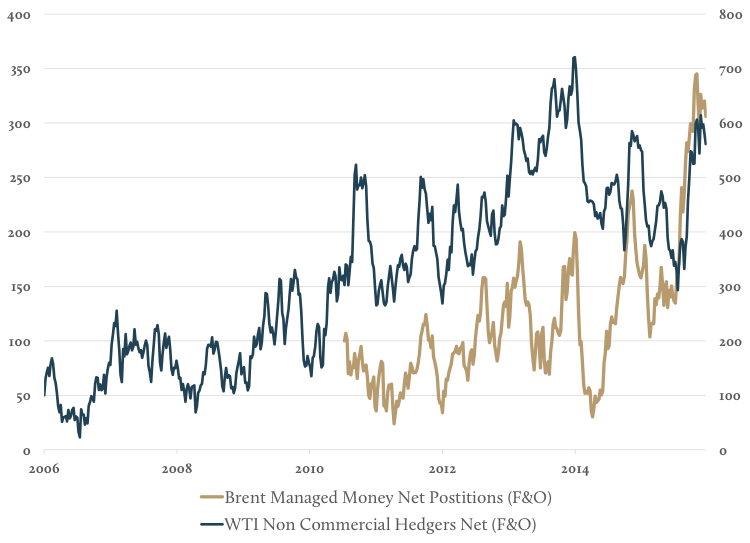 The risk to energy prices is that in the aftermath of the vote, global economic growth slows down, which would push the clean-up of the oil market further back in time. We currently expect that global inventories peak in late summer and then decline relatively quickly. A delay in the normalization of stocks would put a lot of downward pressure on front end prices as the curve is currently already pricing in that inventories are normalized. Importantly, the back-end of the curve (which drives gold prices) would not be affected by such a price move in the front. However, if central banks revert to more drastic measures (like NIRP in the US or more QE) and this is seen by the market as creating inflation in real assets, we expect longer dated prices to actually rise.

Measureable changes in real interest rates, central bank policy and longer-dated energy prices can explain most of the changes in the gold price in the past. However, we can also think of new drivers that impact the gold price going forward, something we haven’t experienced yet. One risk is that the leave vote is the starting shot of something much bigger. The panicking reaction of the financial markets is a clear signal that the monetary foundations stand on extremely shaky ground. Nowhere is this more visible than in the European banks.

As our colleague Alasdair McLeod writes in his recent report (see Brexit is getting the blame, June 16, 2016):

“Caught in the middle of these imbalances are the private sector banks. Because of the scale of these problems, it is no longer a patch-and-mend issue, but a serious systemic problem. The European banking system has been struggling for survival ever since the Lehman crisis, reflected in the dismal performance of share prices for nearly all the major banks.”

”The other evidence of banking woes is the flight of investment capital into government bonds from cash and deposits held within the banking system, so much so that Germany’s 10-year bond now carries a negative redemption yield. The flight into tangible bonds is so pronounced, that €400bn of investment grade corporate bonds are also on negative redemption yields. Market commentators are blaming this on fear of Brexit, but one look at the financial condition of the European banks tells us a different story. The banks must be struggling with deposit contraction on their balance sheets, fuelled by a combination of negative interest rates and systemic fears, at a time when their loan books are burdened with bad and irrecoverable debts. It looks like the modern equivalent of an old-fashioned run on the banking system, led by the pension and insurance companies, which are becoming increasingly concerned about leaving balances with the banks.”

A loss in confidence in the monetary system could have a far bigger impact on gold prices than changes in real-interest rates and longer dated energy prices alone.