Goldmoney’s Personal, Business, and Wealth products are among the first to achieve recognition as compliant with the new Shariah gold standard,...

...established by the Accounting and Auditing Organisation for Islamic Financial Institutions, AAOIFI, in conjunction with the World Gold Council has developed the Shariah standard on gold, which can be expected to broaden the use of gold in the Muslim world. Goldmoney’s platform allows individual people to use gold as money and as a store of value extremely efficiently.

I have personally been involved with this initiative from the outset, and my own motivation has been two-fold. The obvious one is extending the reach of Goldmoney’s products into a market of 1.7 billion people; less obvious, perhaps, is my personal desire to permit ordinary people to protect themselves from the wealth-transfer effect of monetary devaluation. Therefore, I want to ensure that all people have access to gold as a payments and savings medium, so I regard Goldmoney’s compliance with the new Islamic gold standard as a major step forward.

Gold is one of six ribawi items (the others being silver, salt, wheat, dates and barley), which are the staples of life. Strict rules are applied to ribawi to ensure injustice and inequality between transacting parties are prevented. Therefore, throughout Islamic history, gold has had a special significance as both a commodity and money. Logically, there is an understanding that gold is different from government-issued currency. And, therefore, the lawful possession of your own money, such as through a Goldmoney account or Holding, is different to being a creditor of a bank.

For all savers, there is a lack of clarity over the ownership of bank deposits, not only in Muslim’s minds. We cannot know for sure to what extent suspicion of banks and their money deters Muslims from opening bank accounts, but it would be wrong to dismiss it entirely. It would also deny a good reason behind the success of Islamic banking.

Besides the question over bank deposits, there is a practical problem concerning government currencies, many of which lose purchasing power at a faster rate than the dollar. The chart below illustrates this loss for currencies in some major Islamic countries, together with the dollar for comparison, all relative to gold, since 1969, the year before the dollar went off the gold standard. 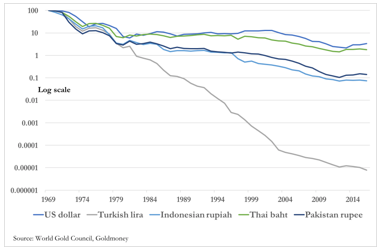 Note that the price scale in the chart is logarithmic, meaning these losses over time are far higher than first appears. Muslims in these countries have suffered greater currency depreciation, measured against gold, than measured in US dollars, and the US dollar has lost nearly 97%. In short, ordinary people have had a very raw deal by keeping their savings in government currency.

We can assume that this history is a powerful disincentive for them to do so, and is a good reason for them to use gold instead, particularly for capital activities. Networks of pawn shops exist for this purpose in countries like Indonesia, enabling people to mobilise their savings. Indeed, without gold it is virtually impossible for the poor to accumulate the savings necessary to pay for capital items, such as the Hajj, the pilgrimage to Mecca every Muslim is expected to make at least once.

The end of cash

There is little doubt that governments in these nations wish to encourage the unbanked to open bank accounts, and to do away with physical cash entirely. Muslim nations have become two-stream states, with modern cities at one extreme and a cash-based economy at the other. Much economic activity goes unrecorded, and merely bringing it into official GDP statistics is expected to boost economic growth by as much as 20% or more. Doing away with cash simply allows central banks to contain the fall-out from banking crises, and is an objective shared with central banks every were. Furthermore, these moves are expected to increase the amount of tax collected.

In all this, there is likely to be a constructive role for a Shariah-compliant gold payments and savings facility, helping people adjust to the inevitable pressures from governments to replace cash with banking and mobile-based financial technology.

Time will tell. People must also be persuaded that gold stored and insured in secure vaults is at least as good, if not better, than keeping it at home. But the granting of a fatwa for Goldmoney’s platform is an important development for devout Muslims. It is the Western equivalent of facilitating an ethical payment and saving facility for everyday use.