Untangling gold at the Bank of England

From 2006 the Bank of England’s Annual Report has declared the quantity of gold in its custody, including the UK’s own 310 tonnes. Prior to that date a diminishing quantity of on-balance sheet gold (sight accounts) was recorded in the audited accounts, which then disappeared. This tells us that sight accounts (where the BoE acts as banker and not custodian) were dropped. This is sensible, because the BoE is no longer directly liable to other central banks while gold prices are rising.

Of course, the BoE doesn’t hold just central banks’ gold; it also holds gold on behalf of LBMA members. However, LBMA storage at the BoE is probably a fairly small part of the total, because the bulk of settled transactions are in unallocated accounts where the underlying owner does not own physical metal, and the majority of transactions are closed even before settlement is due. Furthermore LBMA members have their own storage facilities or use independent vaults. So to all intents we can regard the BoE’s custody gold as owned by central banks.

It should be borne in mind London is the most important market for physical delivery, particularly for central banks. For this reason most central banks buy sell swap or lease their monetary gold in London. The exceptions are Russia, China and the central Asian states who have been the main buyers of gold – always from their own mine output – and do not ship this gold to London; and having substantial foreign reserves from trade surpluses, they have no requirement to do so.

To add to our analytical difficulties, the custody figures presented are net of gold being leased, because leased gold is delivered out of custody. We know that the BoE encourages its central bank customers to pay for its expensive storage charges by earning leasing income, thanks to an unguarded admission from the Austrian central bank last year that it had defrayed its storage costs this way, and a Bundesbank statement that it withdrew gold from London rather than pay high storage fees. The BoE’s custody total is therefore a net figure, with significant quantities of gold out on lease and not actually in custody. However, we can derive some interesting information given the headline custody numbers and some reasonable assumptions.

We can therefore draw up a tentative table as follows: 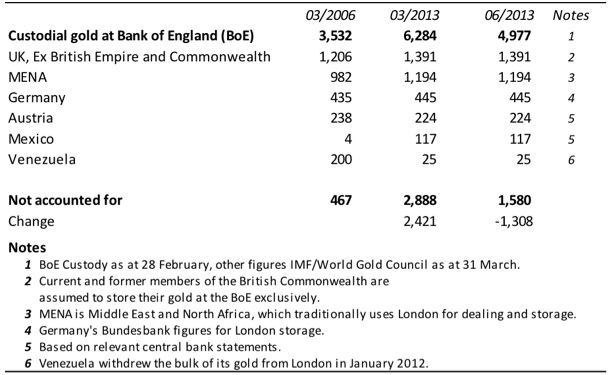 The approach is to start with the declared gold in custody and subtract what we reasonably know exists to see what’s left. On reasonable assumptions (described in the notes to the table) we can account for all but 467 tonnes of the gold in the BoE’s custody in March 2006. However, remember this is a composite figure, because the BoE leases custodial gold by agreement with its customers – the majority of which will have been delivered out of custody to the market. We have no way of knowing whose gold is actually leased, but at least we more or less know what should be there.

We also know that the gold owned by the central banks represented in the table above plus that of Russia, China, the central Asian states and the US, totalled 12,361 tonnes in March 2006 according to the IMF/WGC statistics. The remaining central banks which are certain to keep gold in London between them owned 18,377 tonnes. To suggest that they had only 467 tonnes of this at the BoE is only true in the sense that some of their gold is out on lease. We can only speculate how much on the basis of what portion of 18,377 tonnes we would expect to be stored in London, but a figure in excess of 5,000 tonnes seems highly likely.

By March this year, the quantity of gold in custody had mysteriously risen from 3,532 tonnes to 6,284 tonnes, leaving a balance not-accounted-for in our table of 2,888 tonnes. Over the intervening years, western central banks officially sold 1,184 tonnes, most of which will have probably passed through the BoE’s vaults. This gold flow is not reflected in custody figures in the table.

The custody ledger is therefore more complicated than its face value. Gold is being leased and has gone out of the door. Gold is being held and not leased, and yet more gold has been shipped in from other centres to be sold, leased or swapped. The amount disclosed by the BoE is effectively a “float”: a net figure comprised of larger amounts. We can therefore assume that despite the rise in custodial gold, gold from the BoE vault has also been supplied to the market.

It is extraordinary that the BoE on behalf of other central banks has been arranging leasing contracts for gold that seems unlikely to return. The lessees may from time to time have been able to buy back the bullion to deliver to the lessor and re-deposited it back with the BoE; but most of bullion goes to India, China or South East Asia from whence it never returns. This may have been less of a problem before Chinese demand took off, people began buying ETFs, and there was a growing supply of scrap. But this has not been the case for several years now, and the remaining leasing agreements must have to be rolled forward, leaving central bank customers of the BoE semi-permanent creditors of bullion banks.

One can only surmise that the central banking community of North America and Europe see gold as an increasing embarrassment. Nevertheless it is hard to understand why central banks continue to lease gold, particularly after the banking crisis when central banks must have become more aware of systemic risks and the possibility their lessees might go bankrupt. More recently, leasing will have almost certainly been a source of finance for cash-strapped eurozone states, and might help explain how they have survived in recent months. However, this cannot go on for ever.

Since the Cyprus debacle

We now turn to the last column dated June this year. The figure for custodial gold of 4,977 tonnes is “at least 400,000 400-ounce bars” taken from tour-note 2 of the new virtual tour of the gold vaults on the BoE’s website. Tour-note 3 gives us the date the information was collated as June this year. This compares with the figure at February 28 from the BoE’s Annual Report of the equivalent of 505,117 bars. So it appears that at least 100,000 bars have disappeared in about four months.

Is the difference of 100,000 bars a mistake? The wording suggests not. The Bank appears to have thought that if it said in the virtual tour, “over 400,000 bars in custody” it would be sufficiently vague to be without meaning; but it is so much less than the figure in the Annual Report dated only four months earlier that it is unlikely to be a mistake. We must therefore conclude that they meant what they said, and that some 1,300 tonnes has left the vault since 1 March.

We now consider where this gold has gone. Gold demand in Europe began to accelerate after the Cyprus debacle at a time when Chinese and Indian demand was also growing rapidly. Meanwhile mine production was steady and scrap sales in the West were diminishing. This was leading to a crisis in the markets, with the bullion banks caught badly short. Hence the need for the price knock-down in early April.

The price knock-down appears to have been engineered on the US futures market, triggering stop-loss orders and turning a significant portion of ETF holders bearish. However, the lower price of gold spurred unprecedented demand for physical gold from everywhere, considerably in excess of ETF sales. The fact the gold price did not stage a lasting recovery tells us that someone very big must have been supplying the market from mid-April onwards, and therefore keeping the price suppressed.

So now we have the answer. The BoE sold about 1,300 tonnes into the London market, which given the explosion in demand for physical at lower prices looks about right.

This leaves us with two further imponderables. It seems reasonable given the acceleration in global demand that the bulk of the gold supplied by the BoE has gone to the non-bank sector around the world. In which case, the bullion banks in London still have substantial uncovered liabilities on their customers’ unallocated accounts, on top of the leases being rolled. The second is a question: how much of the remaining 1,580 tonnes not-accounted-for last month been sold since June?

Conflating these two imponderables, unless the BoE can ship in some more gold sharpish, there is unlikely to be enough available to supply the market at current prices and bail out the bullion banks in London, so they must still be in trouble. The supply of gold for lease seems to have diminished, because the Gold Forward Rate has gone persistently negative indicating a shortage.

It appears the leasing scheme, whereby central bank gold is supplied into the market, has finally backfired. Prices have risen over the period being considered and leased gold has disappeared into Asia at an accelerating rate never to return. While the bullion banks operating in the US futures market have got themselves broadly covered, the bullion banks in London appear to have passed up on the opportunity to gain protection from rising bullion prices.

The final and fatal mistake was to misjudge the massive demand unleashed as the result of price suppression. This was a schoolboy-error with far-reaching consequences we have yet to fully understand.