The serfs have rebelled – Europe next?

Hayek’s The Road to Serfdom described how personal freedoms are progressively eroded by the state in the name of the common good.

His warning is more associated with totalitarianism and dictatorships, than modern democracies, but the statist attitudes he warned about still apply today and lead to the same loss of personal freedom and increase of state control. In the main, the serfs are patient and tolerant of their masters, but in a democracy, the establishment behind the state risks being challenged. And that has happened twice this year, first with Brexit and now with Trump in America.

We can be certain that the establishment in Britain and America will reinvent itself. Theresa May is not out to change the world, but is adapting to the new realities. Donald Trump is still mostly an unknown quantity, but the initial impression is one of appalling economic ignorance, dressed up as the new Reaganomics. He proposes substantial tax cuts and state-directed infrastructure spending “to make America great again”. But unless tax cuts and infrastructure commitments are made in lock-step with reductions in government spending, which seems extremely unlikely, the outcome will be to stimulate latent price inflation to a surprising degree.

The starting point for “Trumpenomics” could hardly be worse. The level of debt in both the government and private sectors is too high to be sustained already, and from this elevated base it is proposed to print and borrow much more. Payment for this profligacy can only come from credit creation, as banks mobilise and gear up on their excess reserves at the Fed to buy government bonds. The accumulation of latent fiat money since the financial crisis will at last be applied to driving up prices on Main Street, instead of mainly on Wall Street as heretofore. The status quo has concealed enormous economic and monetary distortions, the unwinding of which will have unexpected consequences for prices.

Private sector wealth and savings have already suffered considerable dilution from decades of the Fed’s monetary policies. Significant numbers of the American population are finding it hard to make ends meet, and have been in financial difficulties for many years. Accelerated government deficit spending is an added malevolent influence, which can be expected to drive up prices of ordinary goods, all other factors being equal. While Keynesians believe in economic stimulation, the reality is an added round of monetary debasement will increase the impoverishment of the “deplorables” who voted for Trump. It will turn out to be a destructive Keynesian policy additional to existing policy mistakes.

For the moment, with the stock market roaring on the prospects of all this lovely stimulus, no one seems that worried. But already, we see the US Treasury market falling rapidly, with 10-year Treasury prices down roughly 8%, a catastrophe for investors who have bought into the Yellen put. The dollar has also risen against other currencies, reflecting the attractions of higher dollar yields. And at the same time, commodity prices are roaring. The chart below, which is a composite of industrial raw materials, illustrates this problem. 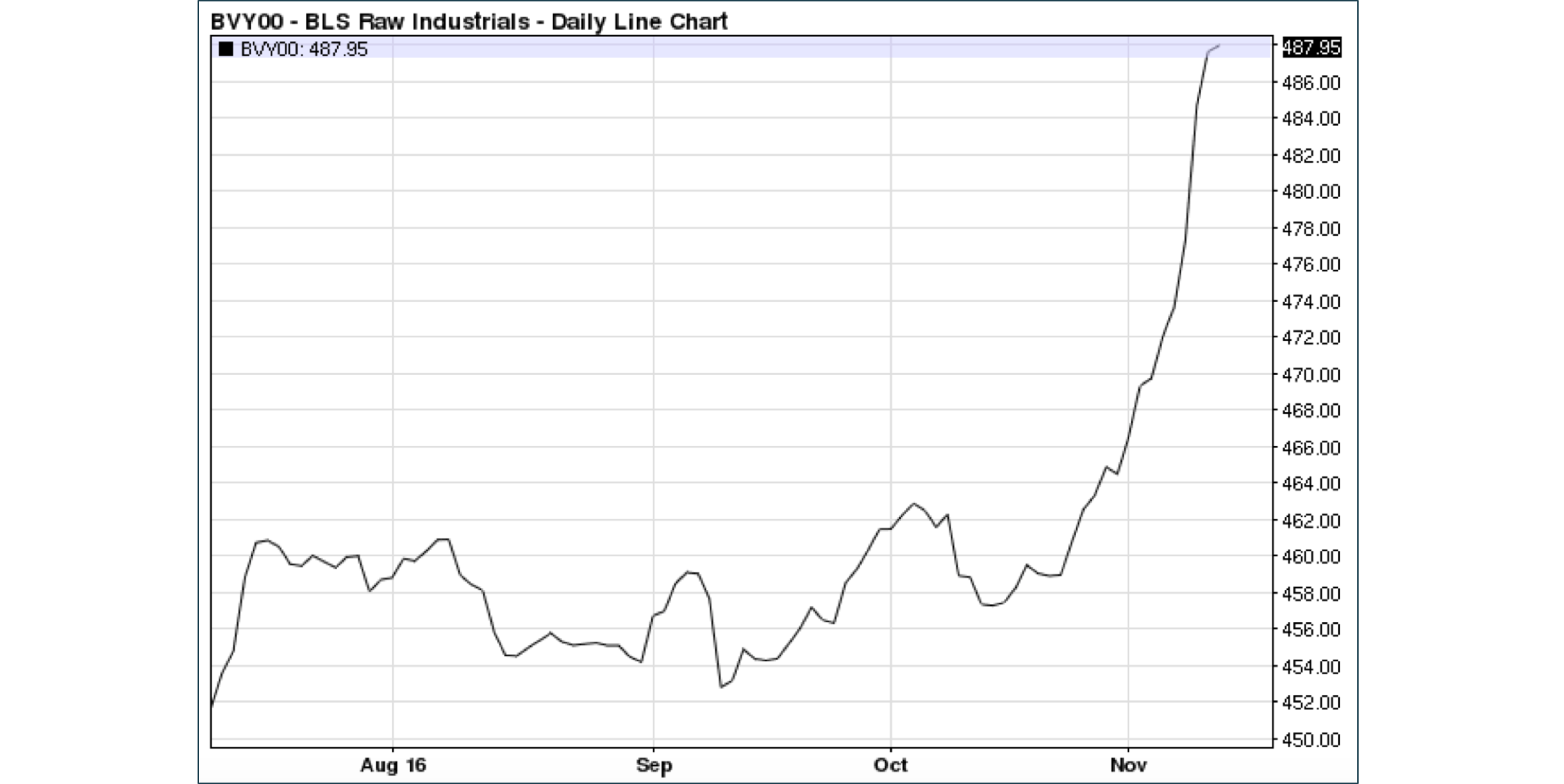 The surge in raw material prices is not widely appreciated. For now, higher raw material prices are expected to be absorbed by retail businesses, as Mark Carney stated at Tuesday’s UK Parliamentary Treasury Committee meeting. It’s a case for the three wise monkeys. But only so much can be absorbed by margin compression before customers pay up, or retailers shut shop and manufactures scale back production. Welcome to the new great America.

We are now seeing term rates rising and the purchasing power of the dollar, measured in industrial materials, falling significantly before any stimulation from Trump’s accelerated deficit spending. He’s too late and will only aggravate a bad situation. The reason commodity prices are rising is mainly due to stockpiling by China, which plans its own infrastructure boost. Instead of only the largest country measured by global trade looking to spend on infrastructure development, in addition we will have the largest country measured by GDP looking to do the same. The timing of Trump’s planned spending-spree could hardly be worse, from a price-inflation perspective.

The rise in the dollar against other currencies is also creating destructive chaos. The reserve currency everyone has borrowed is rising in value against local currencies, leading to a scramble for cover, and a shortage of dollars in the interbank markets. These difficulties should not be underestimated, being extremely costly for indebted businesses in emerging markets and in the Eurozone. The rise in dollar term-rates also exposes the ECB’s and Bank of Japan’s monetary policies as being entirely wrong. It has led to substantial falls in the euro and yen against the dollar, and massive additional losses on bond investments denominated in these currencies.

The EU and the ECB have been badly affected by the Trump surprise. Suddenly, Brexit looks like a prescient move, with the UK likely to get a better trade deal with an Anglo-Saxon partner, than originally thought. Other nations could well have their own serf-driven rebellions, with many elections and referendums due in the next year. Furthermore, Trump is likely to reduce America’s NATO commitment in a new policy of détente with Russia. The political situation has suddenly become very dicey, and the economic situation has just become worse as well.

The ECB has for the last eight years successfully contained a systemic banking crisis, involving variously Ireland, Cyprus, Greece and Portugal, with real threats from Italy, Spain and even Germany. To maintain the value of the collateral and investments held on bank balance sheets, the ECB has reduced interest rates and elevated bond prices by buying large quantities of debt in the market. It is a policy that has worked so far, because exogenous threats were also contained. This is no longer the case, and Eurozone bond prices have been exposed as considerably more overvalued than US Treasuries, given prices that imparted negative yields to German bunds. The effect of further bond price falls on bank balance sheets could well be catastrophic.

Today, the obvious weak point in the financial system is Italy. Italy faces a constitutional referendum on December 4th, which has been postponed from October. The vote is an attempt by Matteo Renzi, Italy’s Prime Minister, to reduce the Senate’s power. In effect, the power lost to the Senate will be transferred to the executive. Originally, Renzi pledged to resign if the referendum went against him, but recently he appears to have backed away from this commitment as the chance of failure has increased. Italy matters, because it is on the verge of a major banking and economic crisis and the serfs smell a constitutional rat.

The weakness of Italy’s banking system is no secret, but commentators miss the underlying point, that the fundamental problem is with the economy. Non-performing loans in the banking system are officially recognised at 18% of GDP. But the public sector is 52% of GDP, which means that NPLs are over 40% of private sector GDP, bearing in mind that this is where NPLs are confined. And it is a fair bet that the NPL problem is worse than officially recognised. So even if the banks are successfully restructured or bailed out, it is unlikely to resolve the underlying economic malaise.

Trumpenomics has just made the ECB’s bailouts considerably more difficult, because as well as non-performing loans, the banks have massive mark-to-market bond losses to absorb as well. Furthermore, the ECB will almost certainly have to raise interest rates more than the Fed, particularly if the euro continues to weaken against the dollar, as seems likely. That is where the crisis will hit, and probably not before long.

In conclusion, Trumpenomics as proposed (though it is obviously not yet in its final form) will lead to accelerating price inflation, accompanied not by better conditions for the “basket of deplorables” as Hillary Clinton described Trump’s supporters, but their further impoverishment through the realisation of the wealth-transfer mechanism of price inflation. Stagflationary conditions are already on the cards, but as a matter of simple economics it is being accelerated further by Trump’s intended plans. The black swan event, the unforeseen consequence, is likely to bring forward the political and economic disintegration of Europe and the euro area, through a falling currency and collapsing bond prices. Welcome to The Donald’s world. The serfs never win, as Hayek recognised.