The Germans – as always – have a word for it: Rohrkrepierer. Literally translated it means “[projectile] that explodes in the barrel before it exits the weapon”. This is a perfect analogy for what happened when the Fed took out what it felt was the financial Bazooka, just to see equities implode on the close (see Exhibit 1). More specifically, the NY fed today announced a massive expansion of its repo facility by a staggering 1.5 trillion $ over 2 days. The Fed also announced it would start purchasing coupon Treasuries as part of its POMO operations. 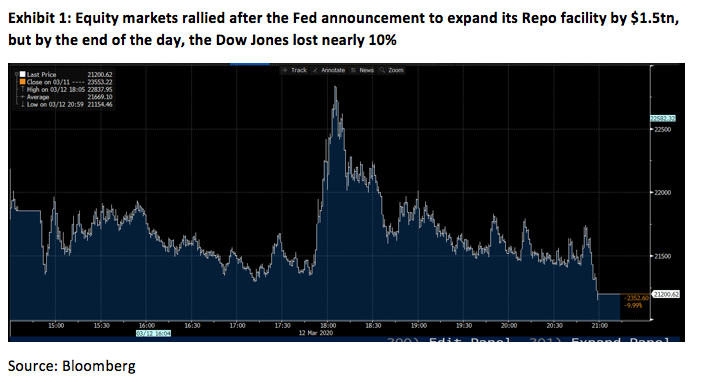 As of today, the S&P500 is down 26.7% from the peak, surpassing the -20% threshold that is usually associated with a bear market. What is staggering though, is the speed at which this happened. It took the S&P500 just 16 trading days to do so. The previous record was set by no other stock market crash than that of 1929 with 30 trading days. In other words, the current equity market crash has been twice as fast as the mother of all crashes in 1929. 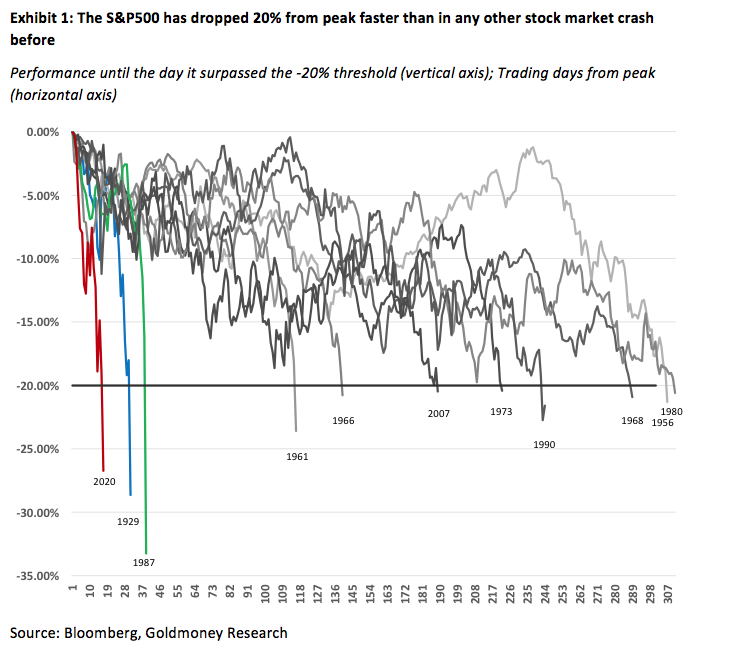 The chart is not exclusive to US equity markets, stock indices around the world are showing a similar picture. Asian markets have shown similar declines over the past 3 weeks, but because they have been in decline for a while, the peak to bottom time has been significantly increased

So why are we seeing such a rapid decline in stock prices? One could easily point to the Coronavirus outbreak and determine that this causes an unprecedented economic impact to a highly interlinked global economy. Ultimately, this may be true. We don’t know yet.

We would argue however, that equity markets have been ripe for a significant correction for a long time and that the Coronavirus is just the event that triggered it. We expect markets to continue to correct even if  the Coronavirus threat were to dissipate over the coming weeks, be it because lockdown measures globally show results, or be it because hotter summer temperatures mean that the spread of the virus is slowed down dramatically.

The root of the current market crash lies much deeper. Central bank interventions have propped up asset markets to record valuation, by almost any measure. At the same time, it has hollowed out the real economy. Artificially low interest rates have led to massive capital misallocation. The US shale oil industry is one such example, where producers with very high operating costs and no means of generating sustainable profits have been showered by investors and banks with money, which kept them going for much longer than what should have been possible in a normal investment environment. With the oil market crash, this comes suddenly to an end. Investors and creditors will have to write down hundreds of billions of dollars over the coming months. We expect other industries to follow. There are serious consequences for credit markets on the horizon.

One thing we think is certain: Despite todays misfire, central banks will continue to try to solve the problem by flooding the market with money. Interest rates will be slashed to even more negative territory. Quantitative easing will accelerate and central banks will likely come up with new ideas how to prevent a credit meltdown and stimulate demand. All that will be good for gold prices.

Fortunately, gold prices have been held back, by rapidly declining energy prices,… 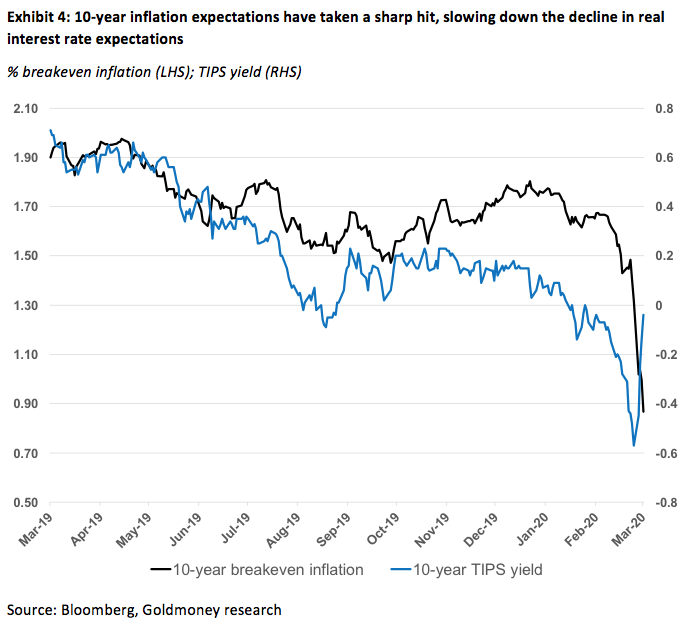 ...and what we believe is liquidation to cover margin calls on long asset positions. We say fortunately, because it allows savers around the world to still buy gold despite the asset meltdown over the past week. We expect much higher gold prices over the medium term and will write about this in an upcoming report.