The equity-gold price conundrum – Part I

By Goldmoney Insights
Goldmoney Staff March 08, 2021
The relentless rally in equity markets has pushed valuations to extreme levels based on traditional metrics. In this report, we analyze the two common arguments made by equity bulls on why this time is different and current valuations are justified. We find that either gold or equities are currently mispriced, as, a) both arguments would imply that gold should outperform stocks and b) if neither of the scenarios play out, equities are due for a substantial correction.


Amidst the global COVID-19 pandemic, equities had staggering rally over the past 12 months. The S&P500 almost doubled in less than a year from a low of 2240 on March 23, 2020 to currently 3860 at the time of writing. In addition, some narrower indices have done even better. Particularly certain technology stocks have relentlessly risen amidst an environment of economic stress.

This has led to a sharp increase in the equities-to-gold price ratio (see Exhibit 1) even as economic growth has collapsed while the Fed increased its balance sheet at an unprecedented level. 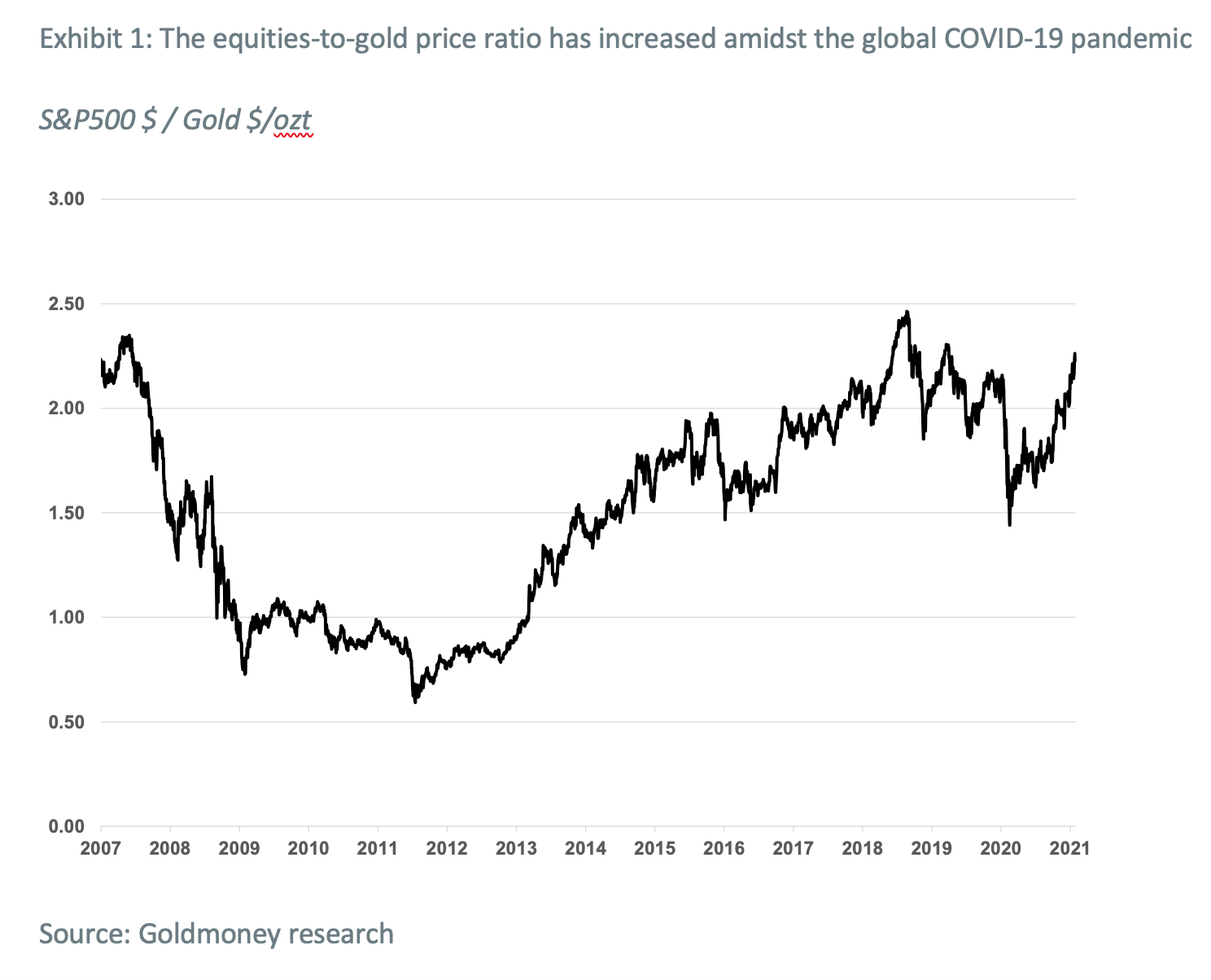 This increase in the equities-to-gold-ratio is not caused by gold performing poorly as prices for the yellow metal are up12% since the end of 2019. It’s simply a consequence of equities’ doing really well. But equity valuations according to traditional metrics have now approached extreme levels. For example, the total market cap to GDP (Buffet indicator) is currently at 193% (see exhibit 2), the highest on record, 50% above the peak during the dot.com bubble. 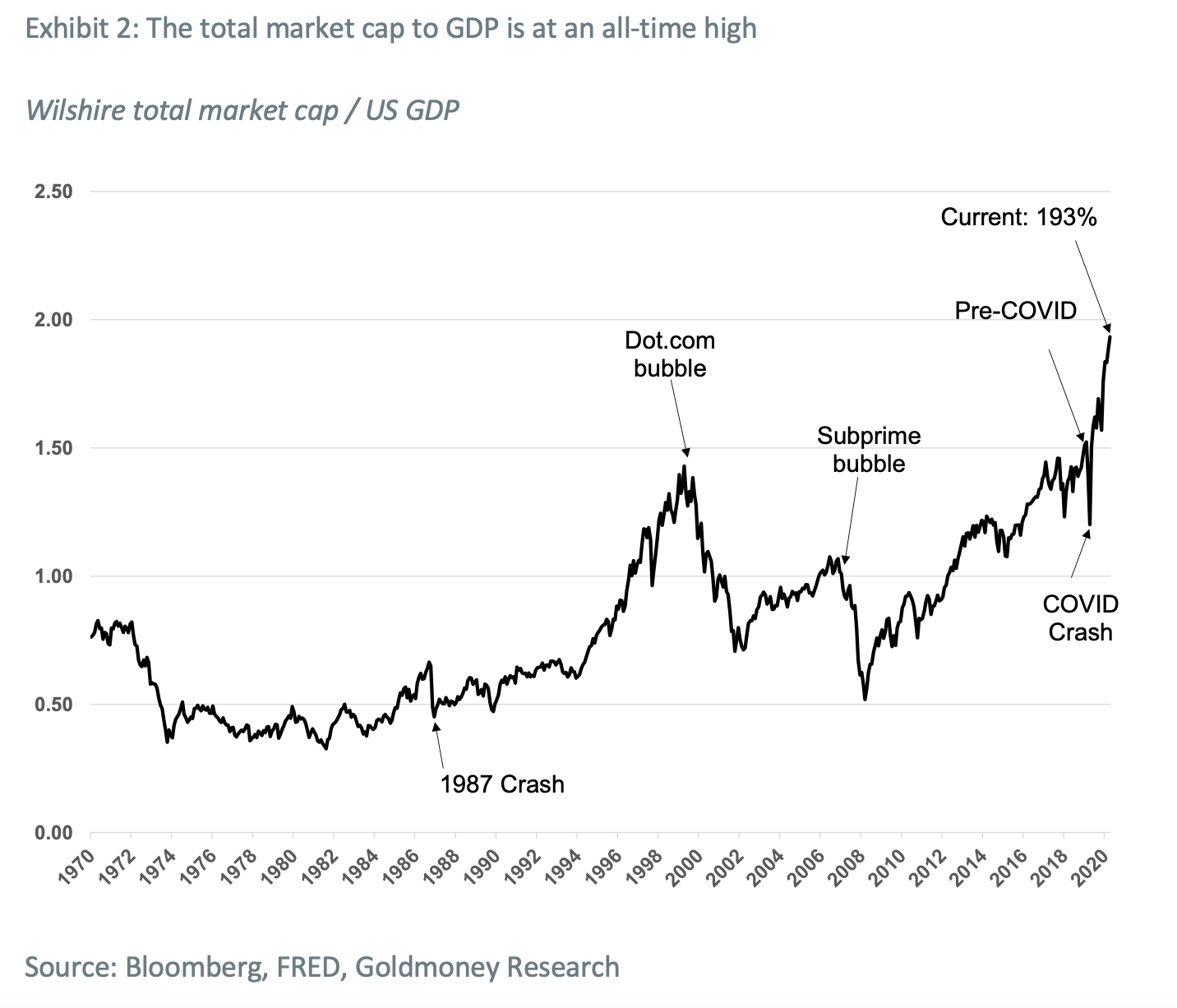 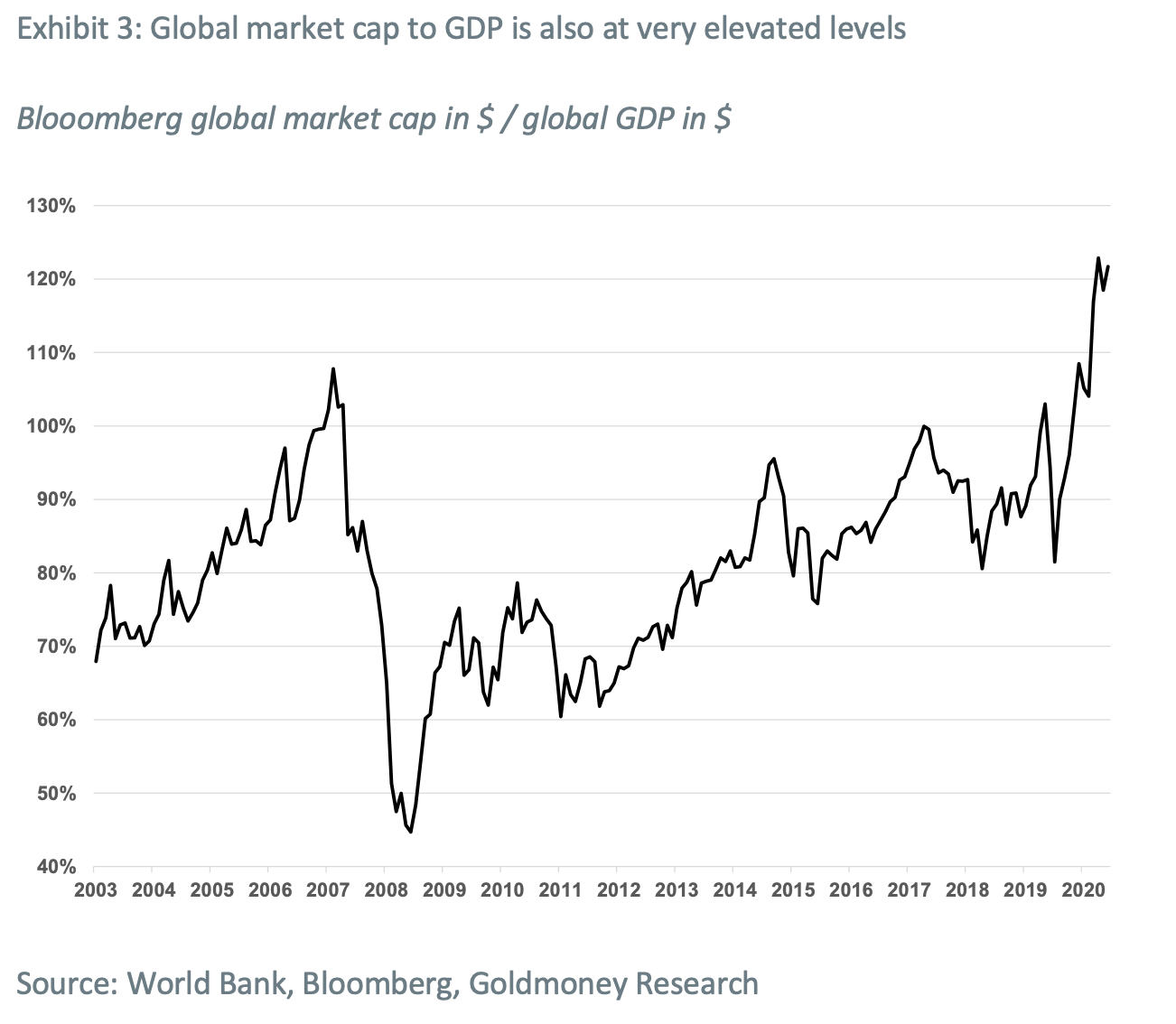 The Cyclically Adjusted Price Earnings Ratio, or CAPE, a measure developed by Robert Schiller, is also flashing red with the second highest reading in history going back to the late 1900s (see exhibit 4). 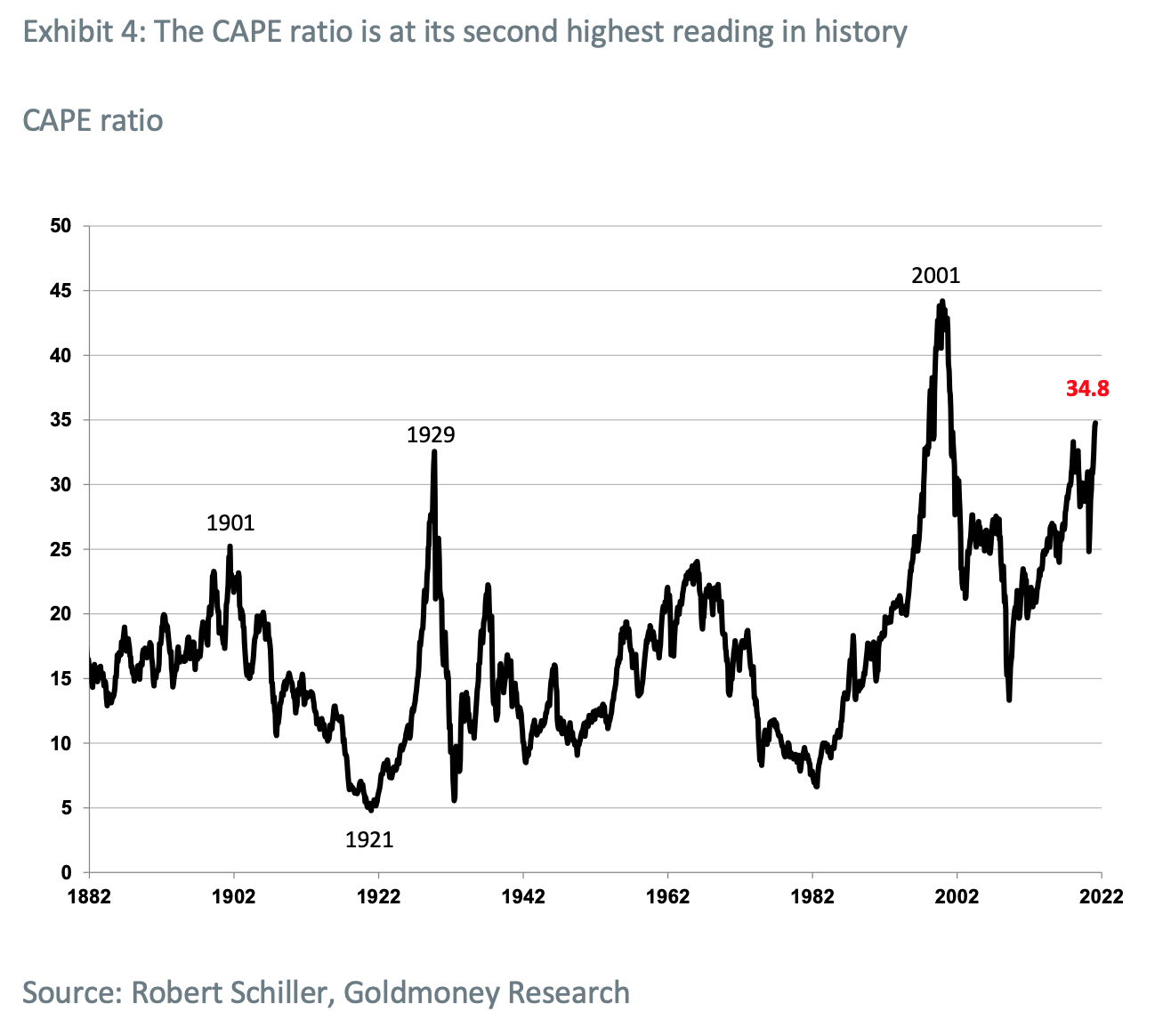 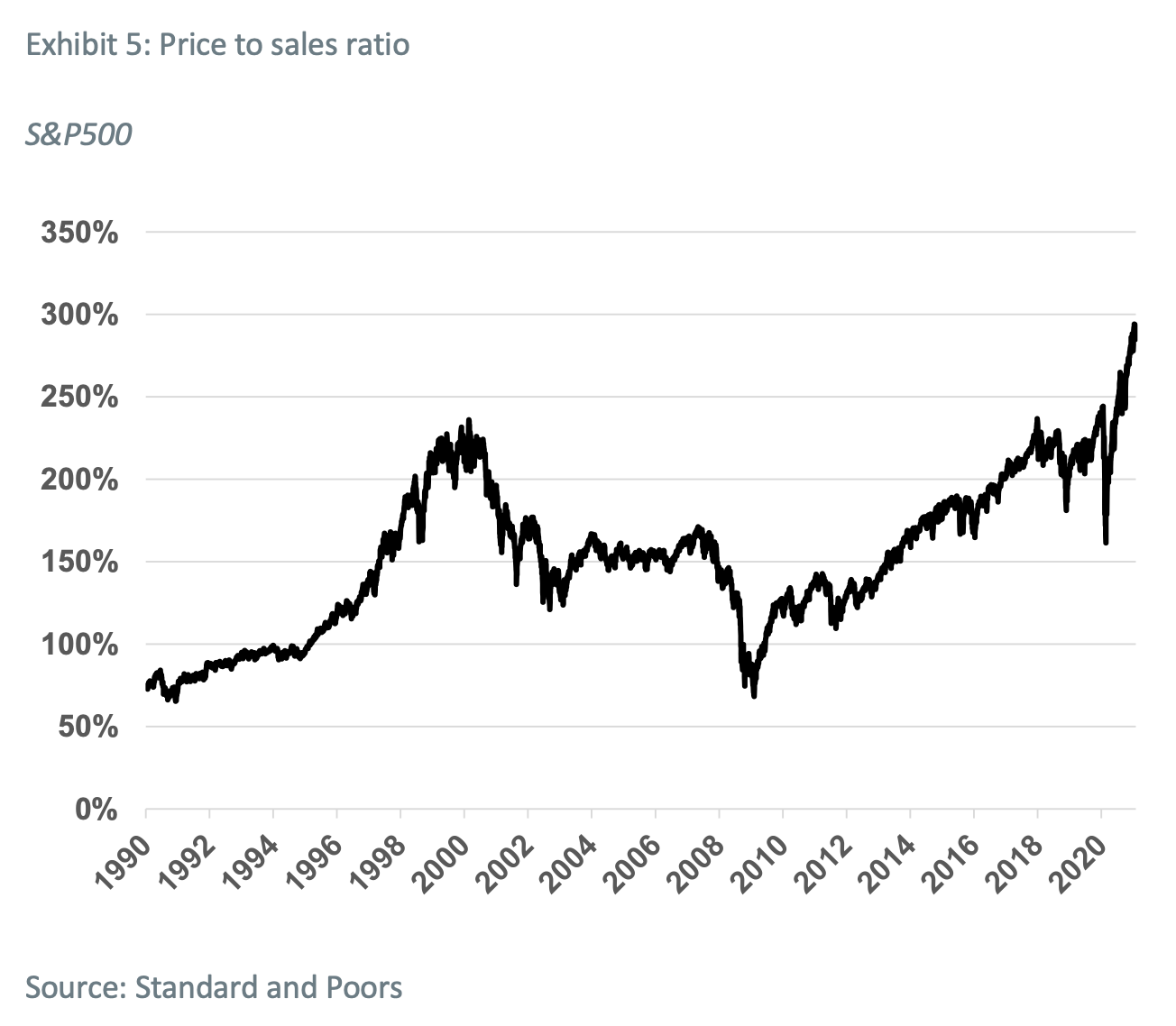 There are other indicators that suggest that equity prices have detached from underlying fundamentals. The put / call ratio on the CBOE has now reached the levels of the dot.com bubble (see Exhibit 6). 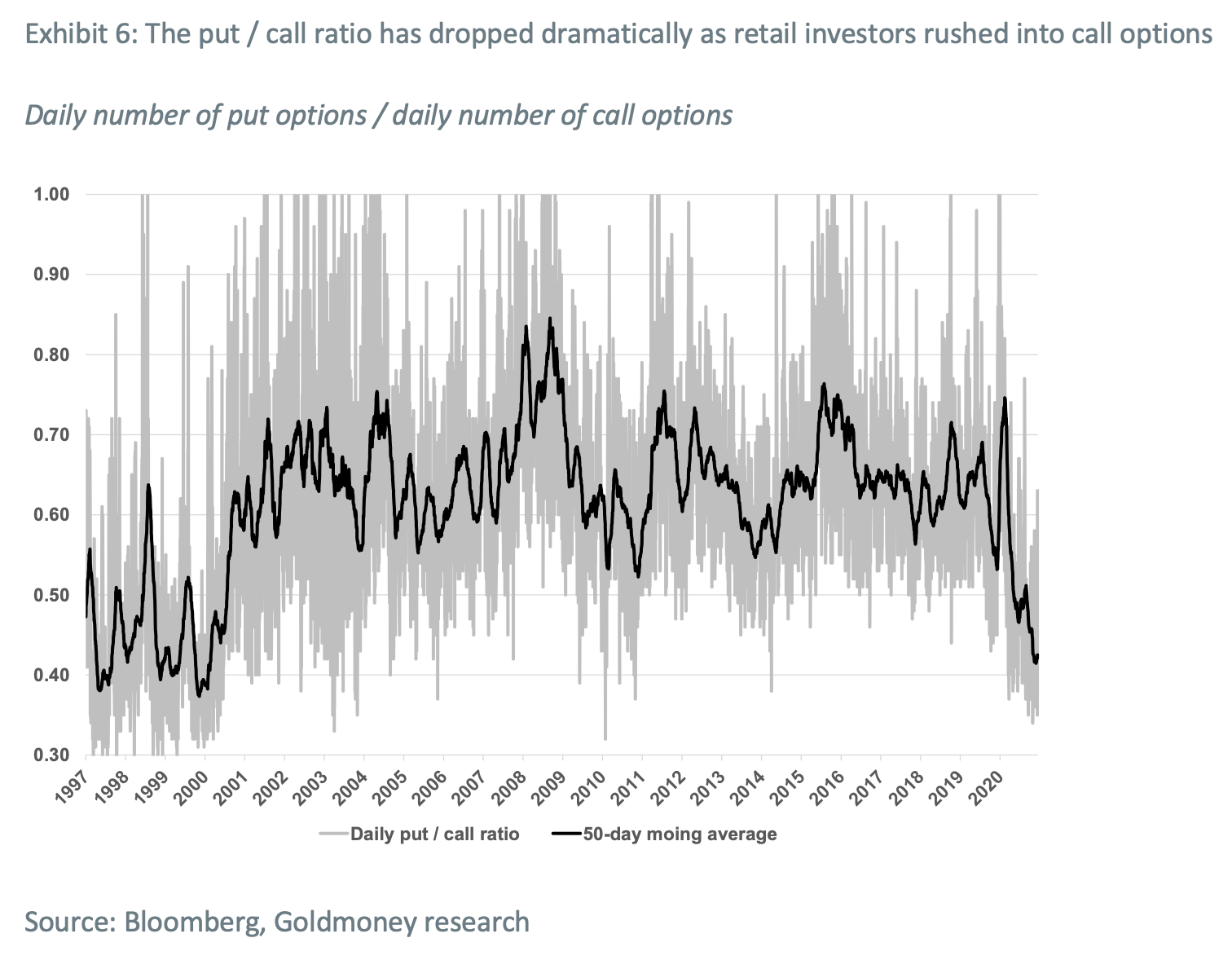 We also saw an unprecedented inflow of new market participants. People with very little or no market exp4erience opened online brokerage accounts at an unprecedented speed during the global lockdowns. More than 10 million Americans opened a trading account in 2020 according to the Wall Street Journal[1].  According to CNBC[2], ten percent of Americans bought a stock for the first time in the past 12 months, and a staggering twenty-two percent of Gen Z (currently 6-24 years old) opened a stock market account in the last 12 months.

And stocks are not the only assets that are skyrocketing. Cryptocurrencies, which since 2017 had temporarily lost their luster, are rallying at breakneck pace since the outbreak of the pandemic (see exhibit 7). 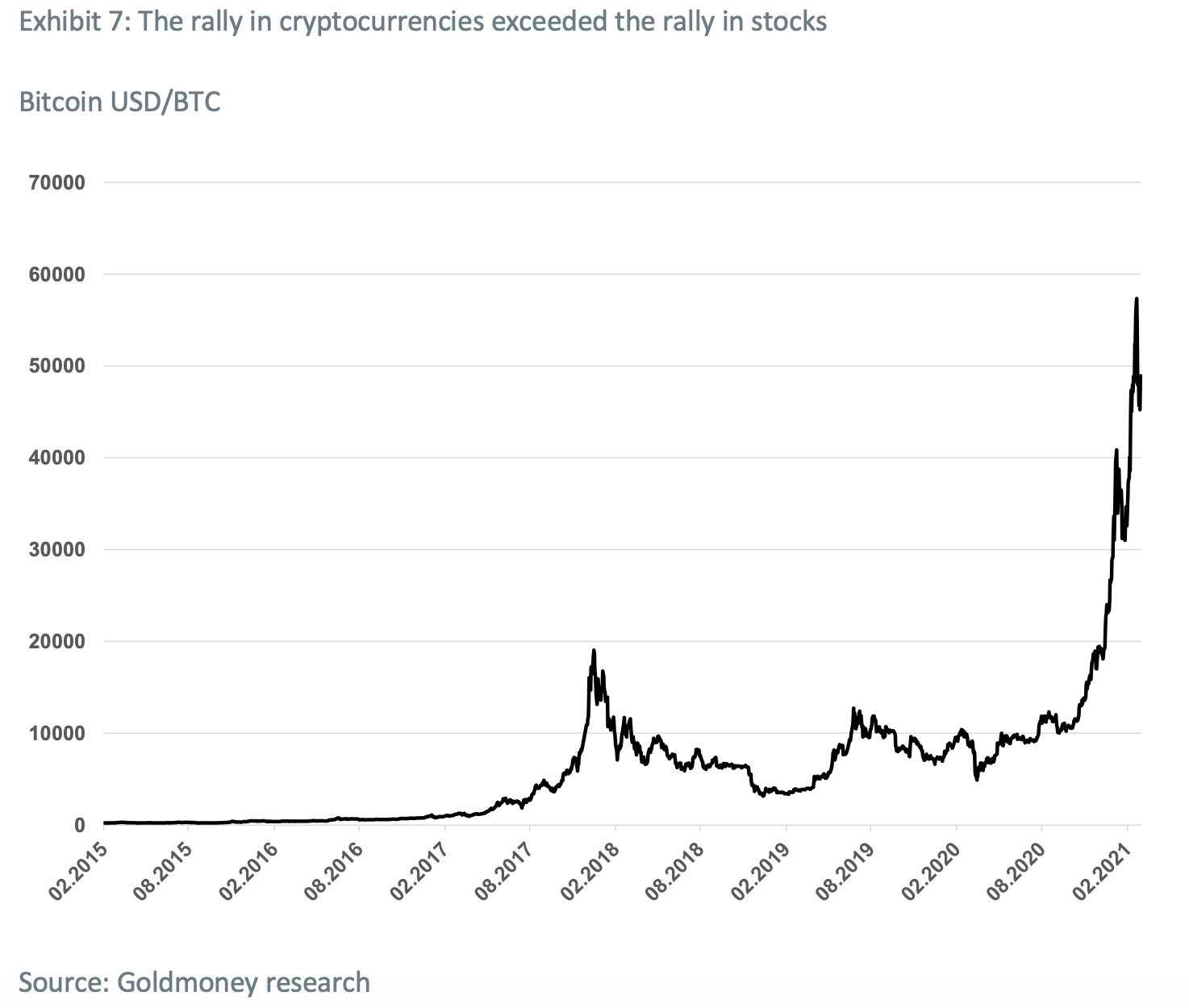 Judged on only those metrics, stock markets are clearly in a bubble. But is this time maybe really different as the bulls argue? In our view, there are only two ways that current stock prices could indeed be justified;

1. The great Gatsby: The pandemic, as negative as it was for economic activity near term, will be followed by a period of unprecedented economic expansion. Hence, GDP will rapidly rise and close the gap to equity prices.

2. The great inflation: Stocks simply price in future inflation that eventually will come on the back of decades of ultra-low rates and central bank balance sheet expansion

We will take a close look at the validity of those scenarios below. As we will show, these scenarios would require that we enter a multi-year period of extreme economic growth or inflation or a mix of both.  However, we will show that gold should outperform stocks in either scenario. And if neither scenario comes true, then stock markets are due for a substantial correction. In that scenario, we would expect central banks to eventually intervene, which should ultimately also benefit gold. Hence, the fact that stocks have vastly outperformed gold over the past months is somewhat of a conundrum. But we are confident that this will reverse going forward.

Scenario one: The great Gatsby

Proponents of the great Gatsby scenario argue that, once the COVID19 pandemic is behind us as enough people are vaccinated and normality returns, economic activity will explode. The argumentation goes that there is a lot of pent-up demand as people were forced to save during the lockdowns and are eager to consume. This demand will be further fueled by stimulus checks (potentially in perpetuity, UBI). At the same time, governments around the world are rolling out huge green infrastructure programs, partially to combat climate change and partially to jump-start the economy.

While some of these deliberations have merit, there are a few important caveats. In our view, it is extremely unlikely for the economy to simply pick up where we left even if the current measures intended to contain the pandemic are completely removed. Many small businesses have closed forever or are about to close in the near term. The surviving businesses are aggressively cutting costs by a) laying off staff and b) trimming production. The former will impact on consumer demand going forward, the latter will impact on the businesses that are further up in the production chain. While there may be pent-up consumer demand from those who still have a job and saved a lot of money during lockdowns, there are also likely to be a lot of pent-up bankruptcies as many businesses have simply survived so far due to government intervention. Eventually many of those businesses will close. This is especially true in many European economies where governments de facto paid companies not to fire people.

The problem is compounded by the fact that the economy was already stuttering long before Coronavirus became a household name. The Fed had to aggressively reverse its hiking cycle already by 3Q2019 as markets started to turn sour. We believe that we are close to or already in a recession by late 2019. Hence, a simple return to the pre-COVID economy would mean back to a “normal” recession. Thus, the drivers for this apparent future multi-year super growth cycle have to be strong enough to offset these bearish factors as well.

Then there is the magnitude by how much the economy would have to expand to justify these kind of equity valuations. If you take a simple metric like market cap to GDP, then GDP would have to almost double from current levels to be in line with historical averages. That implies a nominal GDP of $40tn, or 86% above the levels before COVID (average 2019). Granted that market cap to GDP was already inflated to around 1.2 on average in the ten years prior to the pandemic due to ultra-low interest rates, a return to that average would still require nominal GDP to rise to $35tn or 63% from pre-COVID levels.

Even with a staggering 5% annual GDP growth and 2% inflation, it would still take more than seven years to get there. Are stocks really pricing in the year 2028 with 0% discount rate? And if so, what would be the fundamental driver to push stocks even higher from here?  And is there even historic precedent for these kind of growth numbers? In the post WWII period, there have been only two instances where economic expansion was that high for a prolonged period (see Exhibit 8).

After WWII ended, the US saw a few years of moderate growth as government spending plummeted, followed by very high growth rates at around 6.9% between 1949 and 1953. This was possible as the US was one of the very few countries where none of the infrastructure had been destroyed and the rest of the world had to be rebuilt. However mathematically, even a repetition of the 1949-53 growth period over the coming years would not be enough to justify current stock prices as it lasted for “only” four years before the US fell into another recession. 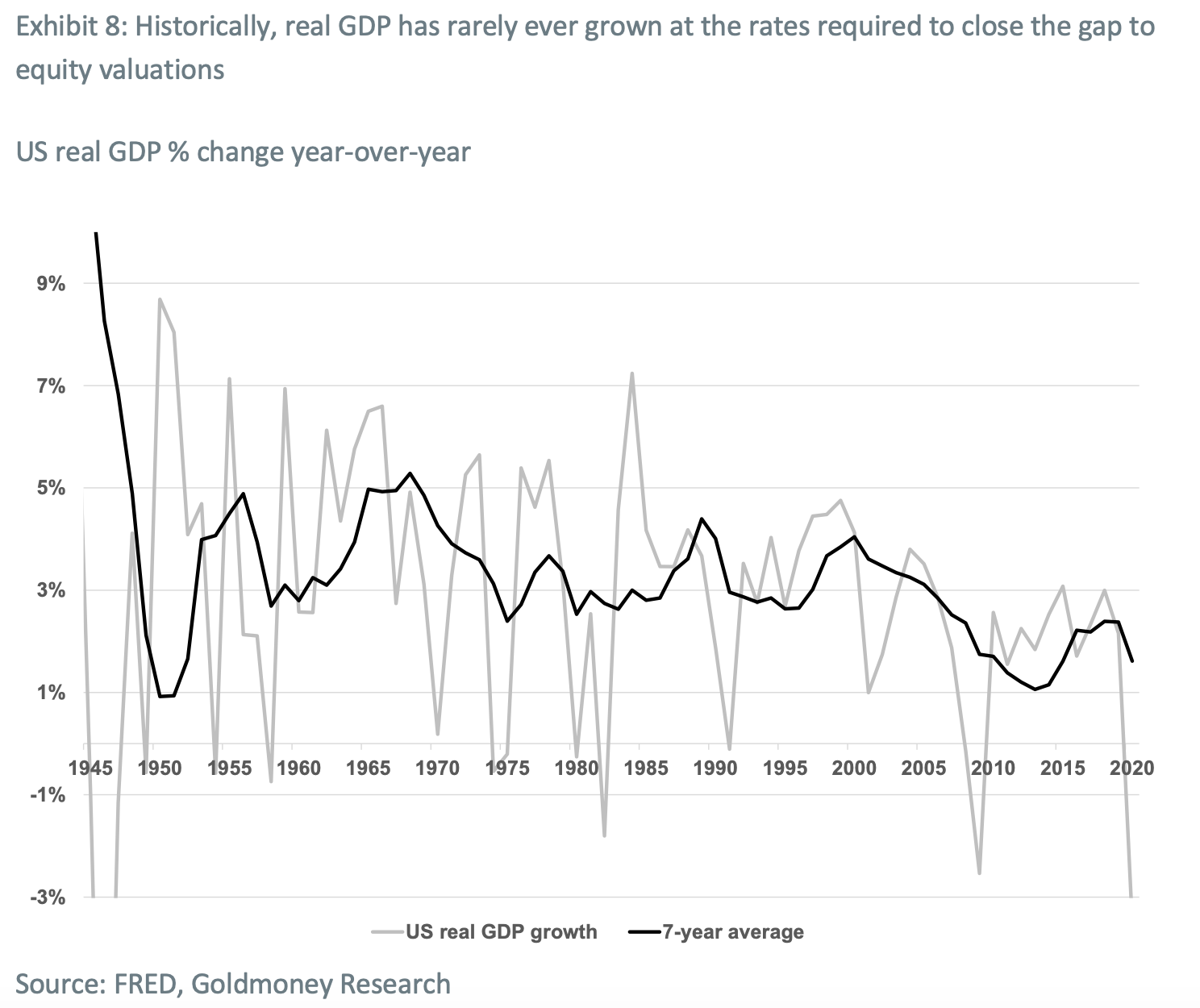 From 1958-1969, the US economy was able to grow close to 5% with a brief monetary recession in 1960. In our view, this 1960s growth period is the only one that reflects the magnitude and length needed to get US GDP back in line with current equity prices. However, the economic environment of the 1960s looked very different from where we are now. More specifically, the US exited WWII with record debt to GPD of over 100%. However, it then immediately cut spending (which resulted in the slower growth rates in the immediate years after WWII) and reduced debt. Inflation also picked up, which, to some extent, helped reducing debt even further[1]. By 1959, the US government had reduced its debt held by the public to 44%, and it dropped to 27% by the end of the 60s (see exhibit 9). 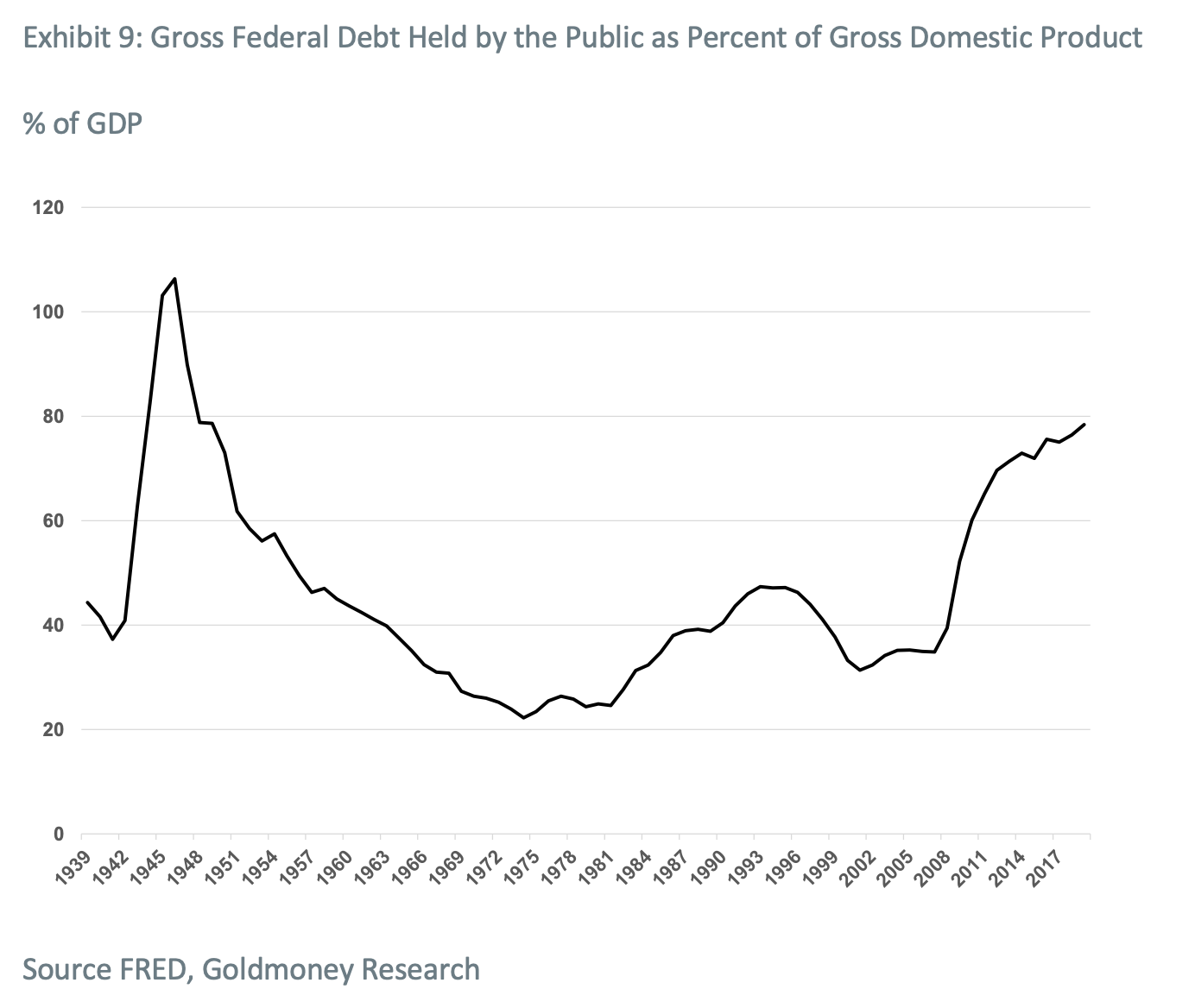 Additionally, 10-year treasury rates average at around 5% during this entire growth period. This is a stark contrast to the 1.5% we are seeing now (which already seem to rattle markets). Furthermore, the FED has no room to the downside, as Fed funds rates are already at zero percent. Hence, the only monetary stimulus that is left is via continued and even more extreme QE. However, as we have shown many times before (see Gold Price Framework Vol. 2: The energy side of the equation, 28 May 2018), QE has always a huge and direct effect on gold prices, and gold is currently not pricing any of that in. Instead, the equity and gold markets seem to be pricing in economic expansion that is driven by anything but more monetary stimulus.

Another theme of the great Gatsby scenario is that governments will unleash massive transformation towards a greener future. This will lead to huge infrastructure investments in energy, transportation and commodity space, create jobs and unlock economic growth. While we believe that this is likely to be true, what the market seems to ignore is that this can only be financed with more government debt. Central banks will ultimately have to buy that debt, which has the same effect as QE as it leads to a growing balance sheet. And as we have outlined before, higher QE leads to higher gold prices. So again, if markets are pricing in economic expansion on the back of a “green new deal”, they seem to wrongly assume that this can be done without an effect on gold price.

Lastly, there is the idea that the COVID relief checks will continue indefinitely, de facto introducing a sort of Universal Basic Income (UBI). This would have an effect on consumer spending and, thus, corporate revenues. However, currently the US is running the largest deficit in history. If UBI becomes a reality, this would also have to be entirely financed via debt. As mentioned before, markets are not pricing this in, otherwise we would see an effect on gold.

Thus, the equity-gold conundrum doesn’t disappear in the great Gatsby scenario. In fact, we think that if we see strong economic growth over the coming years, it will entirely be debt financed and as a consequence gold should outperform stocks, not the other way around.


In the upcoming part II of this report, we will look at the other potential explanation for current equity valuations: the great inflation


What to Read Next