Equities are pricing in vastly different inflation expectations than gold. We think stocks are pricing in massive future monetary expansion while gold is only pricing in what central banks have done so far. Whether equity prices correct first, giving the Fed the pretense to ramp up the stimulus, or whether the Fed keeps expanding even as stocks keep moving higher, we expect gold to outperform stocks going forward over the medium term.

The past few months have been a period of extremes in financial markets across the globe. Crude oil future prices went negative, the Fed launched “unlimited QE” and equities have had the fastest crash in history, followed by the steepest recovery.

This latter part seems at odds with the economic environment we are currently in. We are witnessing the most pronounced global economic contraction in history. The US economy contracted 4.8% in 1Q2020 and the second quarter will be substantially worse. Unemployment is rising at a speed we have never seen before. In the US, continuous unemployment claims climbed to 18 million in just 4 weeks, nearly 3 times as much as during the entire financial crisis 2008-2009 (see exhibit 1). We expect this number to rise over the coming months as we will not just see temporary lay-offs from restaurants and coffee shops, but permanent job losses as companies will go out of business. 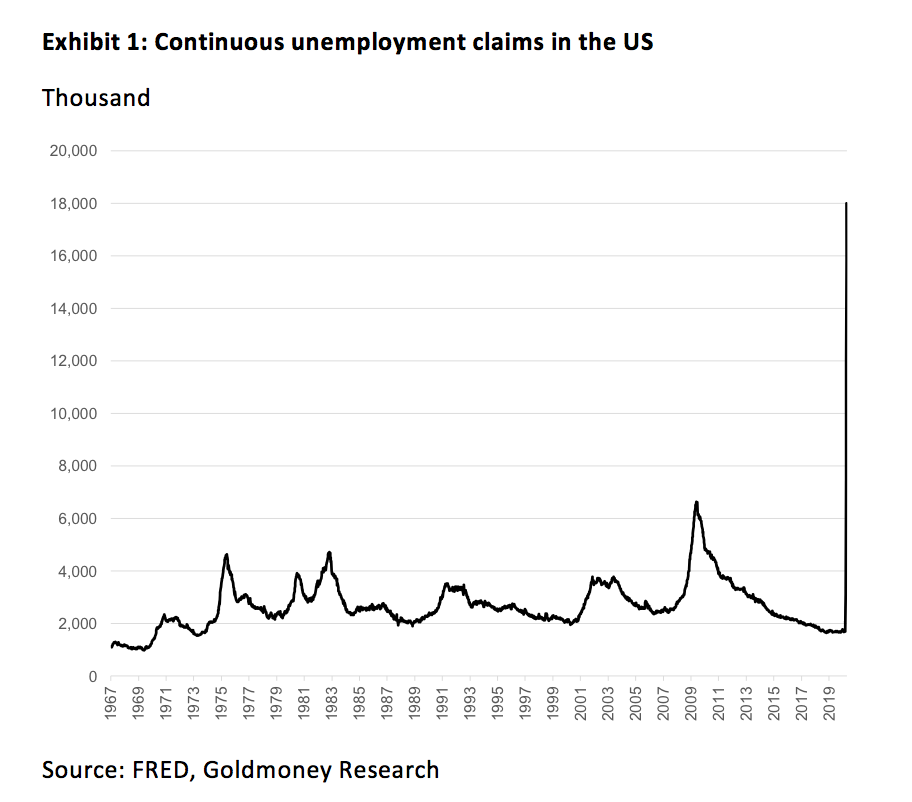 And the US is hardly alone. PMIs across the globe show unprecedented destruction in business activities. In our view, it is extremely unlikely for business activity to just go back to normal in a few weeks as global lockdowns are lifted. At the absolute best, we are coming out of the lockdown and will be entering a “normal” global recession for the next few quarters.

As a result, earnings expectations have come off substantially. While we think that companies and analysts are still much too optimistic when it comes to forward earnings estimates, they did fall by about 20% for the S&P500 companies. On the other hand, stock prices have sharply recovered from their March lows (see Exhibit 2). The S&P500 index is only down 9.8% year-to-date. The Nasdaq 100 is UP 3% by the time of writing. 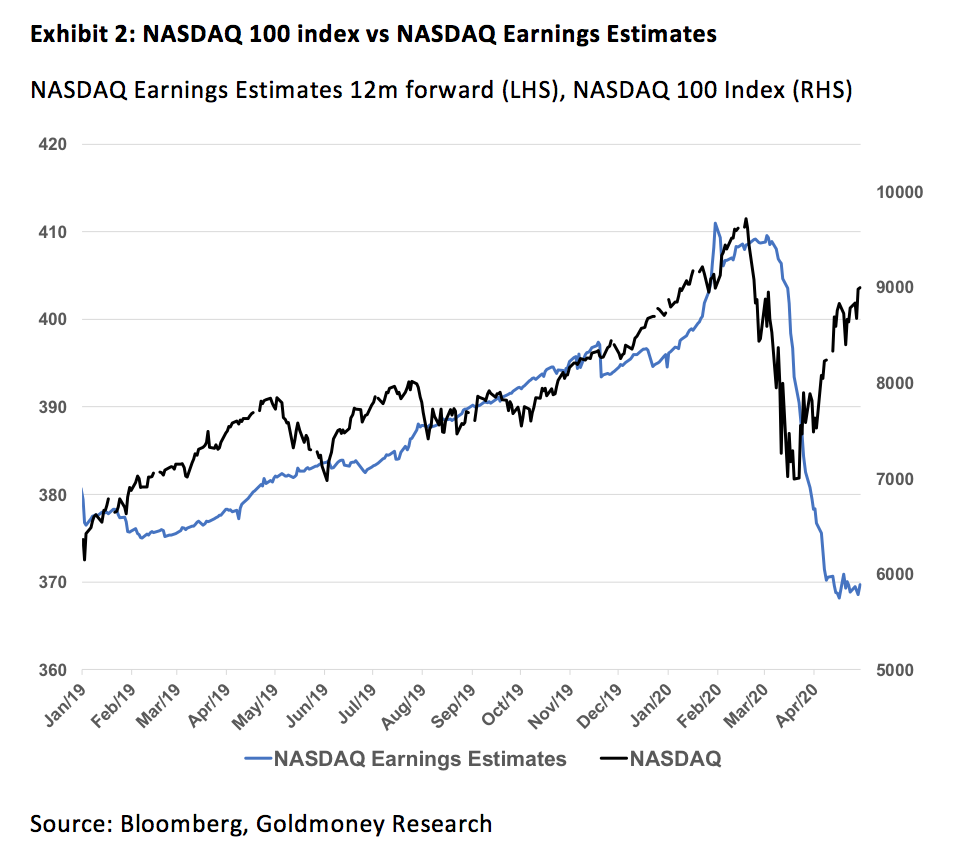 So, what are stocks pricing in? In our view, it is clearly the devaluation of the denominator in which stocks are measured: the USD[1]. A few weeks ago, the Fed has launched what is now dubbed as “unlimited QE”. Effectively, the Fed has returned to its post-financial crisis playbook of buying assets and putting them on its balance sheets. Just this time, in a lot more aggressive fashion than ever before. The past 2 months have seen the fastest and largest ever increase in assets held by the Fed, growing by over USD2 trillion since late February (see Exhibit 3). The Fed is hardly alone, central banks around the world are doing the same. The ECB, for example, expanded its balance sheet by EUR650bn since late February. On top of that, we see unprecedented stimulus by governments as multi-trillion-dollar stimulus bills are being passed around the globe[2]. 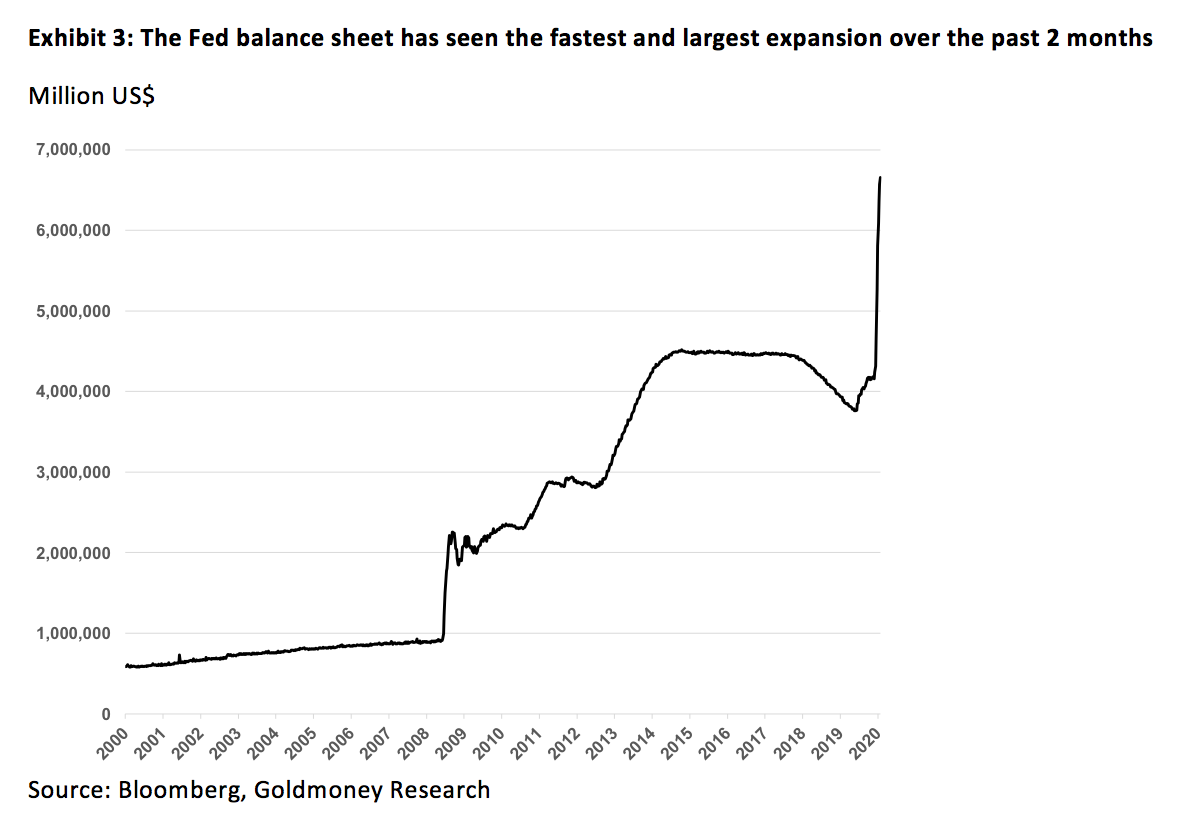 What the market is currently pricing into equity markets, is that all this money injected into the system will eventually lead to much higher price inflation. Inflation – so the idea – will lead to higher earnings again as prices of goods and services go up. Stock prices should reflect this multiplier in revenues and costs. In other words, investors seem to be buying equities as a protection against future fiat currency devaluations rather than because they are convinced that stocks are cheap, and companies are fundamentally in good shape[3].

What is at odds though, is that there seems that equities are pricing in vastly different inflation expectations than other asset classes. Breakeven inflation implied from TIPS (Treasury Inflation Protected Securities) yields for example, suggest that the market is still pricing in modest inflation over the next 10 years. 10-year breakeven inflation is just at 1%, much lower than what it was before the Fed’s buying frenzy started. Breakeven inflation declined sharply at the beginning of this crisis (similar to 2008). It has since somewhat recovered, but TIPS do not price in that the Feds monetary expansion will lead to high consumer price inflation going forward just yet. Arguably, the inflation for which TIPS investors are compensated is the CPI inflation, which may not accurately reflect true inflation over the next 10 years. This was certainly true for the past 10 years. Moreover, the past 10 years have also shown that central bank interventions have mostly led to asset price inflation, hence, the market’s reaction to buying back into equities, even as breakeven inflation remains depressed, is partially understandable. 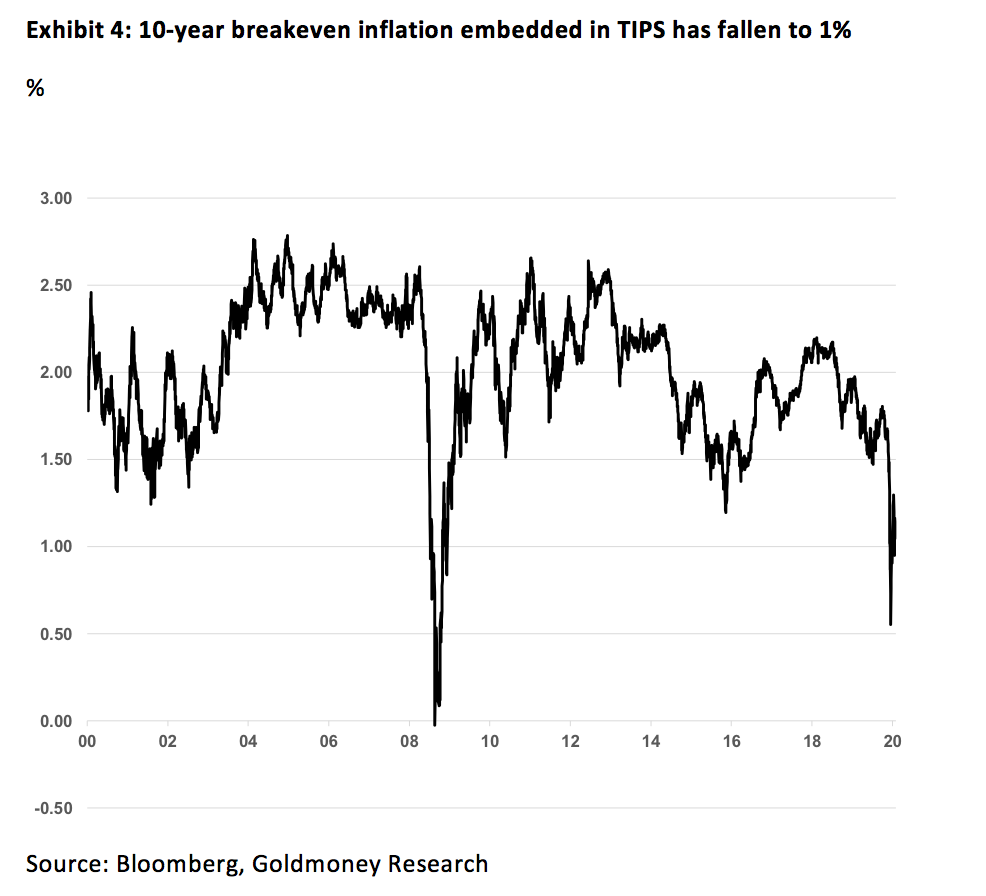 However, the most obvious dichotomy is the one between equities and gold. If expected inflation is the main driver for this massive rebound in equity prices, gold should in our view certainly have outperformed stocks. In a future with weak economic activity but high inflation (stagflation), equities would fare better than cash or bonds, but in real terms, they should still suffer. Gold, on the other hand, will keep pace with inflation, as it has done for centuries, both in world with a gold standard and in a world without.

When we look at the stocks priced in gold, it becomes obvious that either stock prices are too high, or gold prices are too low. Equites and gold seem to be living in two alternate inflation universes. We think that;

• Equities are pricing in enormous future monetary expansion by the Fed and other central banks. In other words, equity markets are implying that the central banks recent actions was just the beginning and more stimulus (dwarfing what we have seen over the past weeks) is certain.

• On the other hand, gold seems to be only pricing in what the Fed and other central banks have done so far, not what they will be likely doing going forward. 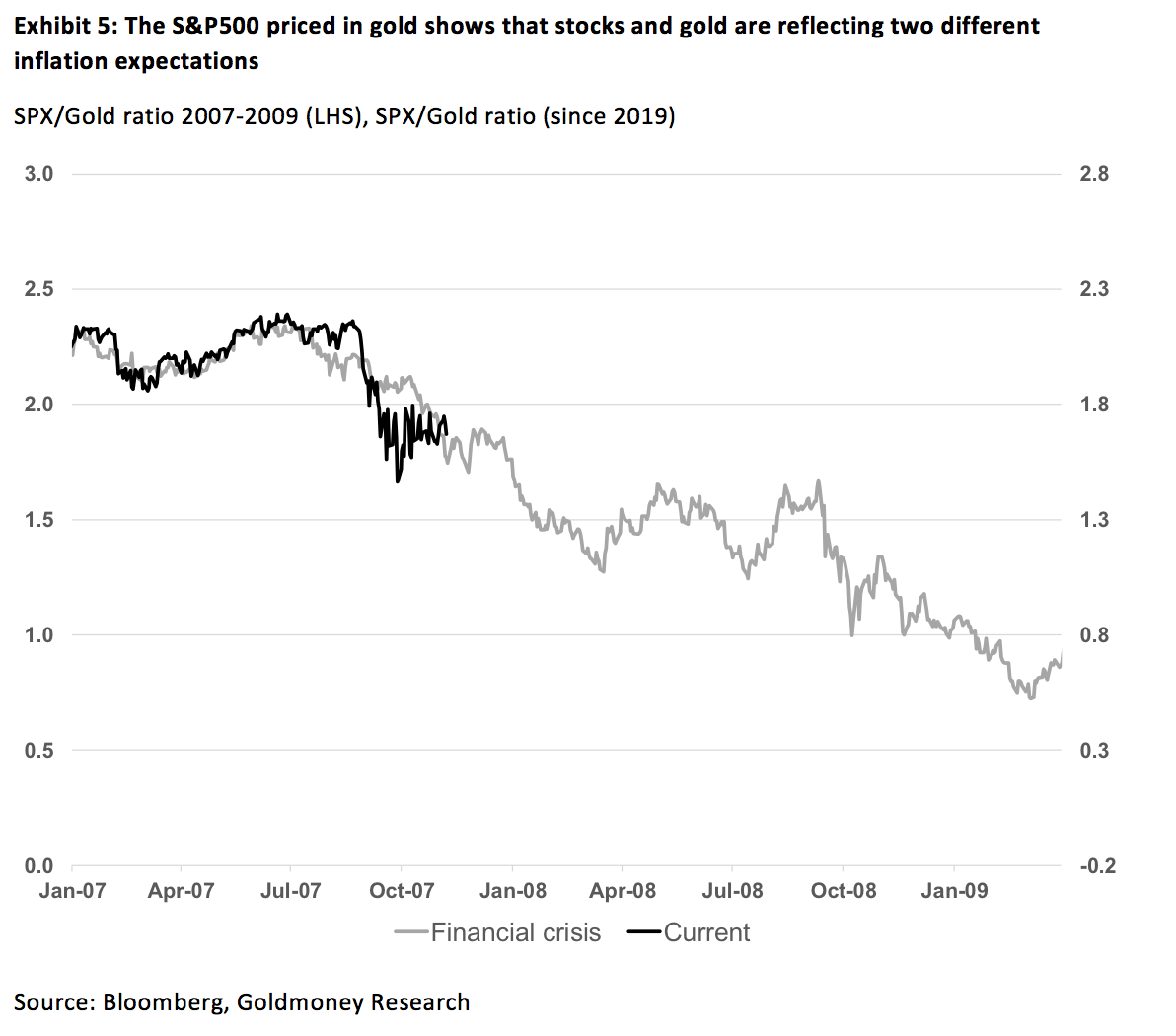 The question is: Will gold rise or equities decline? We think the answer depends on how much more monetary expansion we can expect from the Fed near term if equity markets continue their positive trend. During the financial crisis in 2008-2009, equity markets lost close to 60% from peak to bottom before the Fed went “all in”. Not only was the Fed able to point out to huge wealth effects from the stock market crash (on top of the sharp correction in the housing market), but the market also gave a clear signal of  the economy being in  very bad shape.

Today’s situation is different. The central banks are stimulating solely on their own assessment that the economy is in bad shape (which we think is true), but thanks to their own actions (the “Fed put” has distorted markets for over 10 years), equity markets are no longer giving any meaningful signals of what is happening in the real world. The only markets that continue to indicate that we are in a dire situation are credit markets. And this is also likely to be the reason why the Fed keeps relentlessly buying assets for now, as it is hellbent in trying to avoid credit markets to freeze and the dollar to spike like in 2008.

However, we think there is reason to believe that the Fed needs a stock market crash to go “all in” again. As long as stock markets are signaling that everything is ok, it would, for example, be a hard sell to the American people to introduce negative rates in our view, but the probability is not zero. Maybe the specter of a global pandemic is enough to justify just about anything.

But if they do go “all in” now (without a stock market crash first), it’s hard to see stocks going much higher as they seem to price in such a scenario already. Gold, on the other hand, would sharply rally, and we think it would certainly outperform stocks. Alternatively, if we see a major correction in equity markets over the coming weeks and months, the Fed and other central banks will eventually react in a predictable fashion, and then gold rallies. Either way, we expect gold prices to outperform stocks over the medium term and to go higher in nominal terms.

[1] Or all respective fiat currencies for that matter

[2] And monetized by central banks in one way or another

[3] Some investors do still believe in a V-shaped recovery, but Wall Street analysts, by large, seem to have given up on this hope. Yet, the same analysts are calling for higher stock prices due to the Feds actions.