There was a degree of predictability about the knockdown in gold and silver at the US futures market (Comex) last Wednesday.

The reason is that the Commercials (together the producers, processers, fabricators, bullion banks and swap dealers) have large short positions, so they have a vested interest in lower prices. This is particularly noticeable in silver, which is shown below. 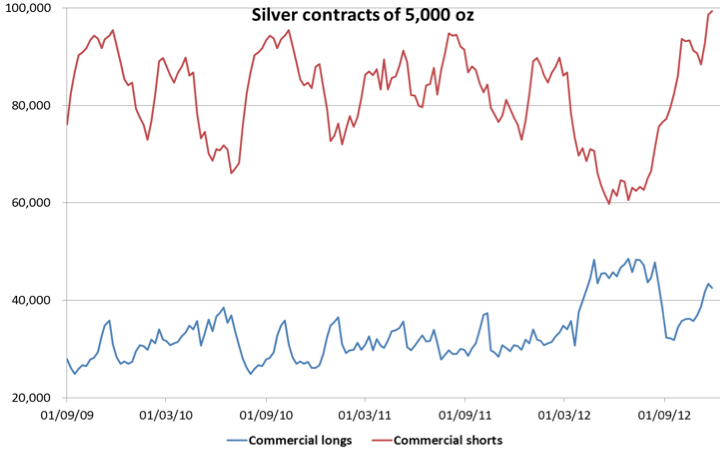 The chart is of Commercials’ shorts and longs as of Tuesday November 27. The Commercial shorts (the red line) now stand at 99,317 contracts, or 496,585,000 ounces, about two thirds of 2011’s worldwide mine production, and is the highest level of exposure since 2009. Because the longs have ticked up (the blue line), the net figure is not yet at record levels, but is only 9,212 contracts away from it.

The justification for looking at the gross short commercial position is that the shorts are mostly the bullion banks, and producers hedging future costs (whose business is channelled through the bullion banks). The long commercials are more genuine, being manufacturers satisfying physical demand and locking in current prices to secure their margins. Swap dealers, again mostly the bullion banks, have positions both ways. The gross short position is therefore a better indicator of the futures market position of the “liquidity providers” than the net balance.

In a properly functioning market, net public demand is always long, so liquidity providers, such as market makers, or in this case the bullion banks on their own account, are always short between them in a bull market. The skill required is to make trading profits in excess of losses on the underlying position. The proviso always is that you never become so short that in an emergency you cannot cover your position. The bullion banks in the silver market are ignoring this overriding principal.

They now have a problem. Instead of having record short positions against an over-bought market, there is only moderate managed fund interest. This interest is shown in the next chart. 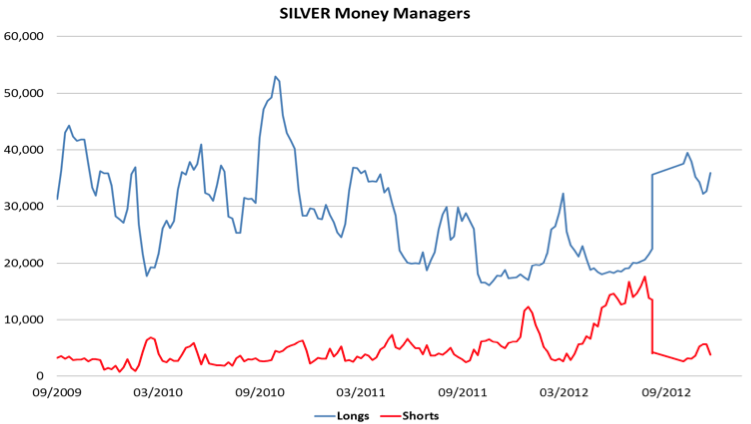 While money managers (mostly hedge funds) have nearly doubled their longs and slashed their shorts since July, their longs are still only a little more than average: this hardly represents the overbought conditions suitable for a major bear raid.

On this evidence, the bullion banks which are short in the silver market are potentially in serious trouble, unless somewhere there is a pot of physical silver they can dip into. There isn’t, if we assume that iShares Silver Trust’s 315 million ounces is unavailable. There is no other identifiable source of silver, other perhaps than some producer supply, and there is anecdotal evidence that on every dip, cash silver migrates from West to East, confirmed by silver being constantly in backwardation.

The odds now favour a substantial bear squeeze. And as the managed funds which lost money on their shorts in June-July sniff sweet revenge, this could rapidly escalate. At the moment, every dollar move upwards in the silver price costs the shorts nearly half a billion dollars. And there is no way it can be covered, because the cash silver simply does not exist.

When the shorts finally run for cover, the effect on the silver price is going to be spectacular.