Silver – the rally is yet to come

By Goldmoney Insights
Goldmoney Staff February 24, 2021
Silver prices have been on a rollercoaster ride over the past weeks, probably also fueled by social media activity. However, we think silver has solid fundamental support at these levels and risks over the medium-term are strongly skewed to the upside.


Four years ago, we presented our silver price framework in which we attempted to identify the fundamental drivers of silver prices (Silver price framework: Both money and a commodity, March 9, 2017). In summer of 2019, we published a report and revisited our silver price model. In that report we concluded that silver prices have “explosive upside”, (Silver prices with explosive upside, August 15, 2019). At the time, silver traded at around $16/ozt. A year later, they traded at $26/ozt, slightly below current levels (see exhibit 1). We are now looking at an environment where we once again expect risks to be strongly skewed to the upside, and the next move in silver could be much larger. 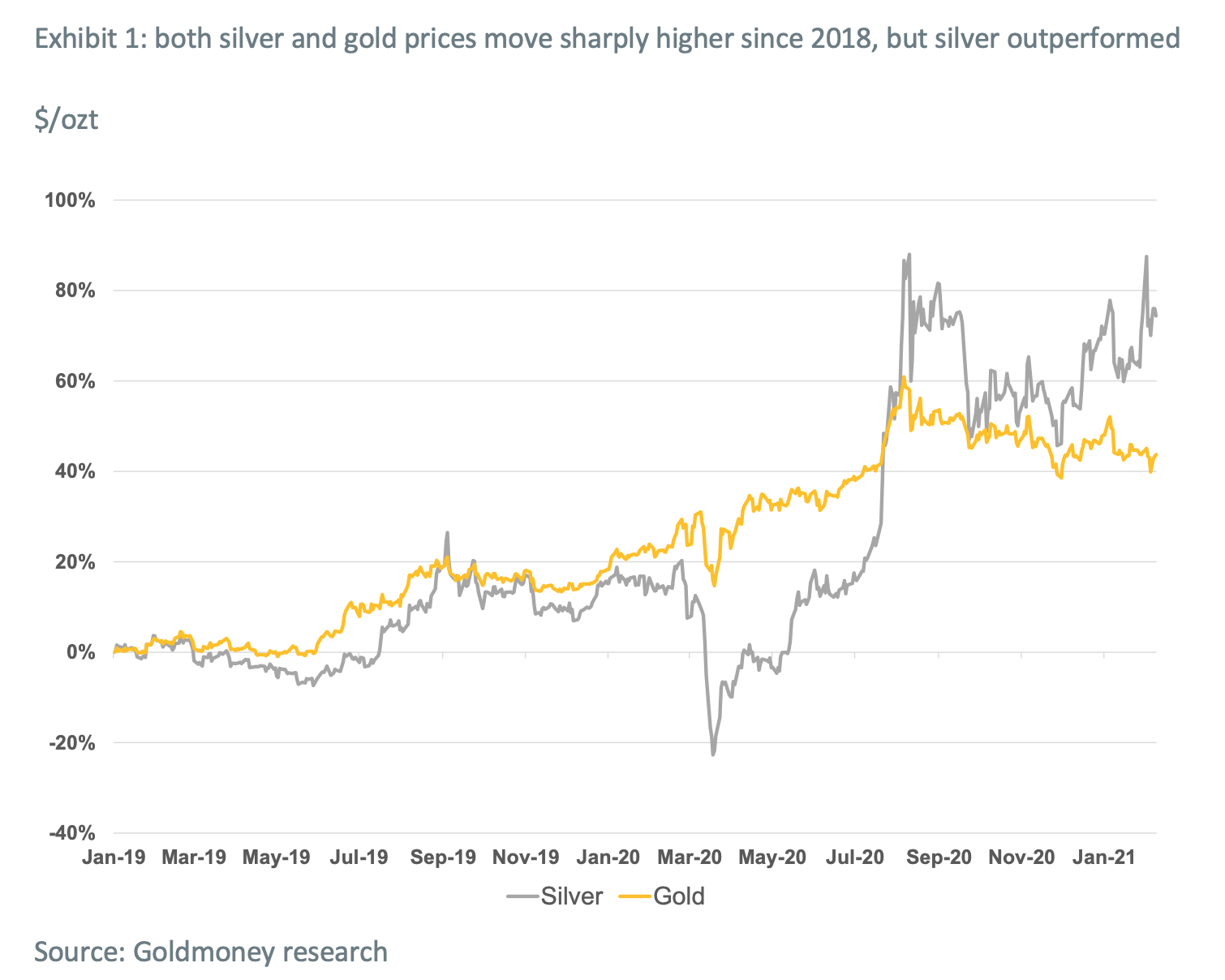 In order to understand our current view, it is useful to revisit our 2019 report and the reasons why we were positive for the metal back then. As we have outlined in our silver price framework, silver is both money (store of value) and an input commodity. Unlike gold, which is simply money, silver is impacted both by changes in monetary demand and industrial demand. From our original silver price framework:
Our call for an upward correction in silver prices stemmed from the observation that silver had not just lagged gold prices, but also the predicted values form our silver price model. From 2019 report:

So why was silver lagging gold in the years up to 2019?  Back then, we concluded that the historical relationship between broad industrial production and industrial silver demand had broken down as demand from the photography industry had collapsed. While demand from other sectors (photovoltaic) had offset some of this loss, it was yet too small in comparison. This had pushed the silver-to-gold price ratio over 90, while the historical average since 1971 was closer to 60 (see exhibit 2). 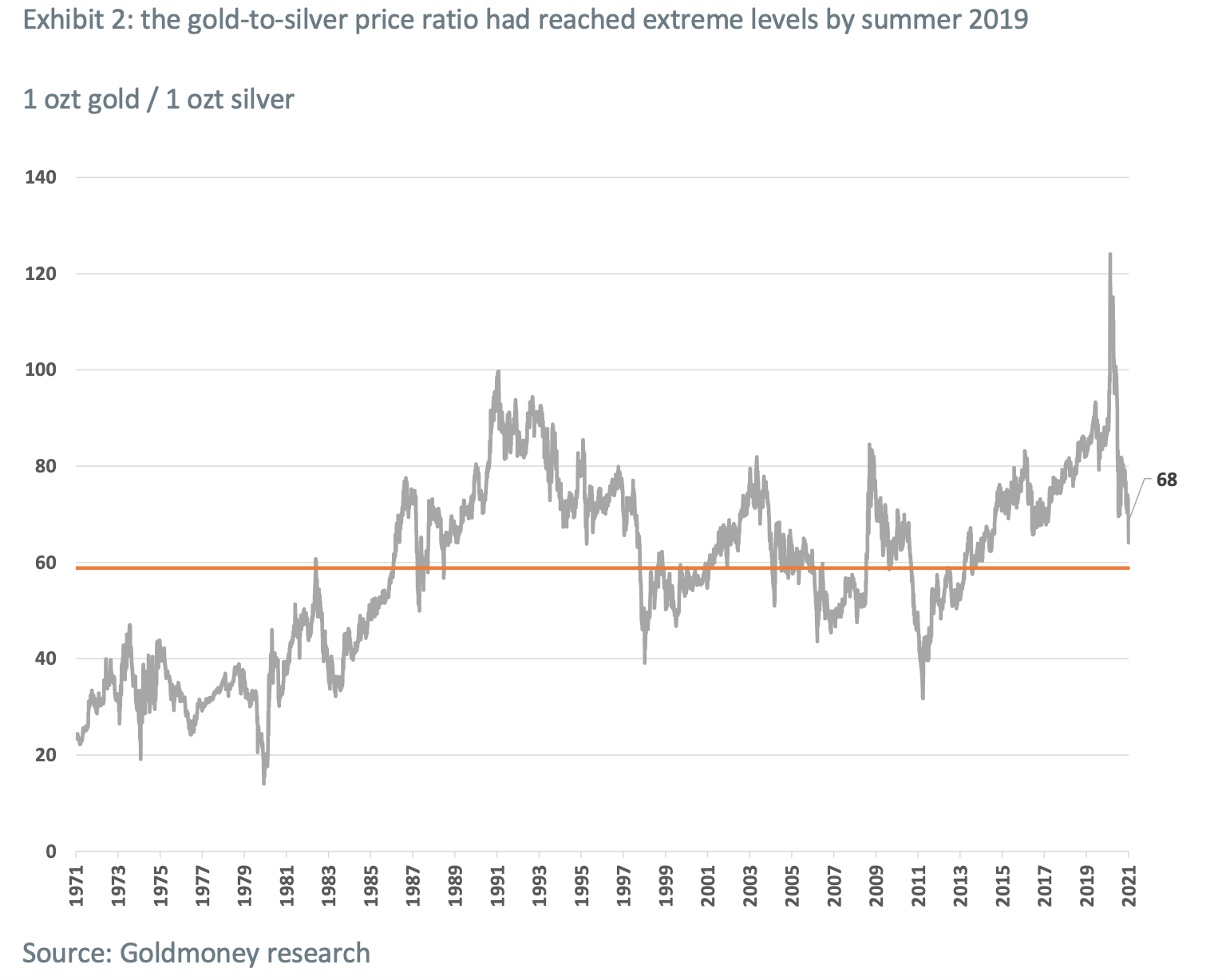 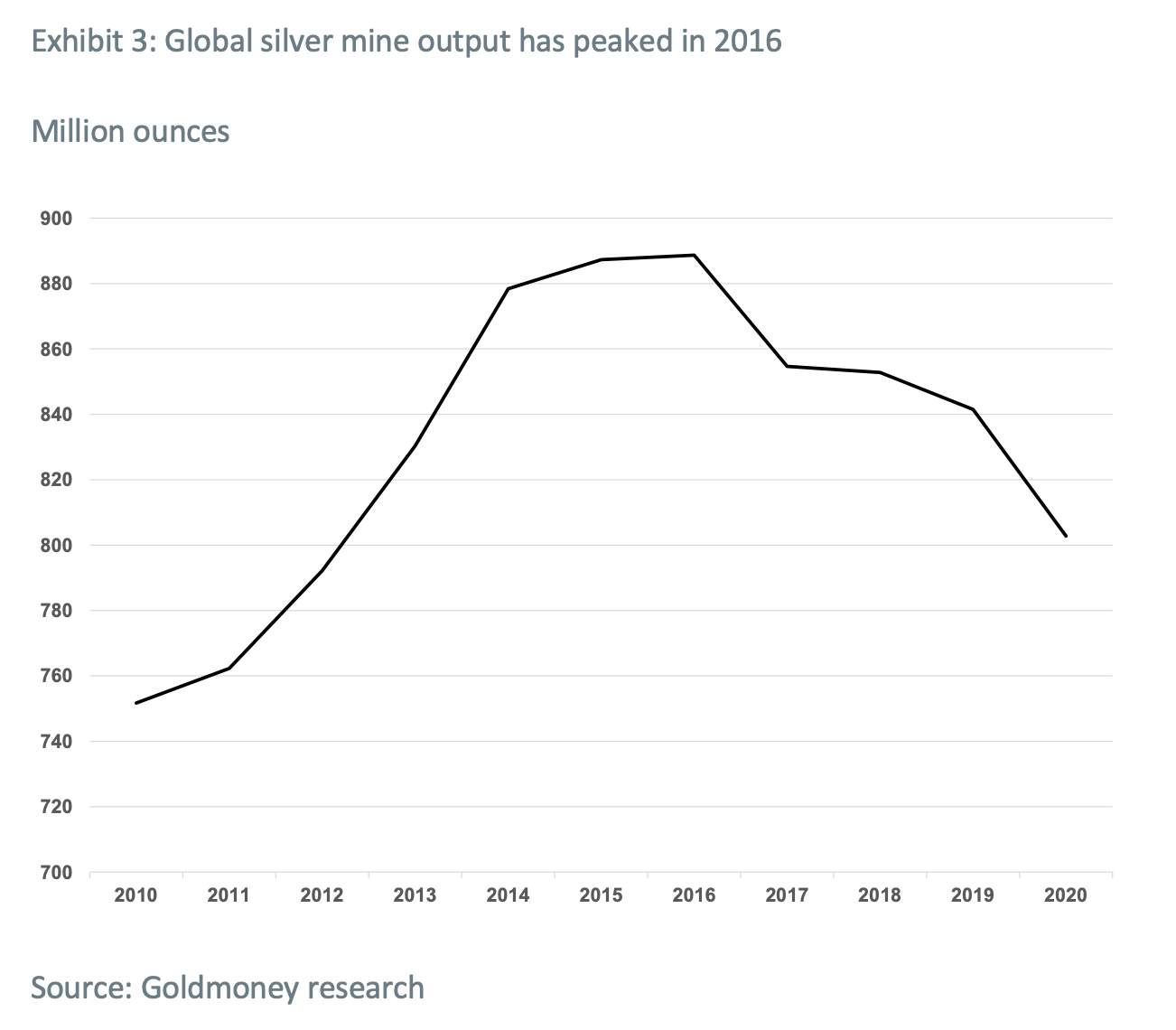 Hence, by mid-2019, we concluded that the headwinds from the industrial sector that plagued silver prices were likely to be a thing of the past. As a result, we expected silver prices to eventually close the gap to gold, which implied a substantial increase in the price.

As there were no more headwinds from the industrial side, monetary demand would become the dominant driver for silver going forward. Importantly, by August 2019, we had become increasingly optimistic for monetary demand for precious metals in general as the Fed had started a new rate cut cycle. The Fed had been raising rates since late 2015. This lasted until early 2019, when financial conditions began to tighten, forcing the Fed to pause (see exhibit 4). 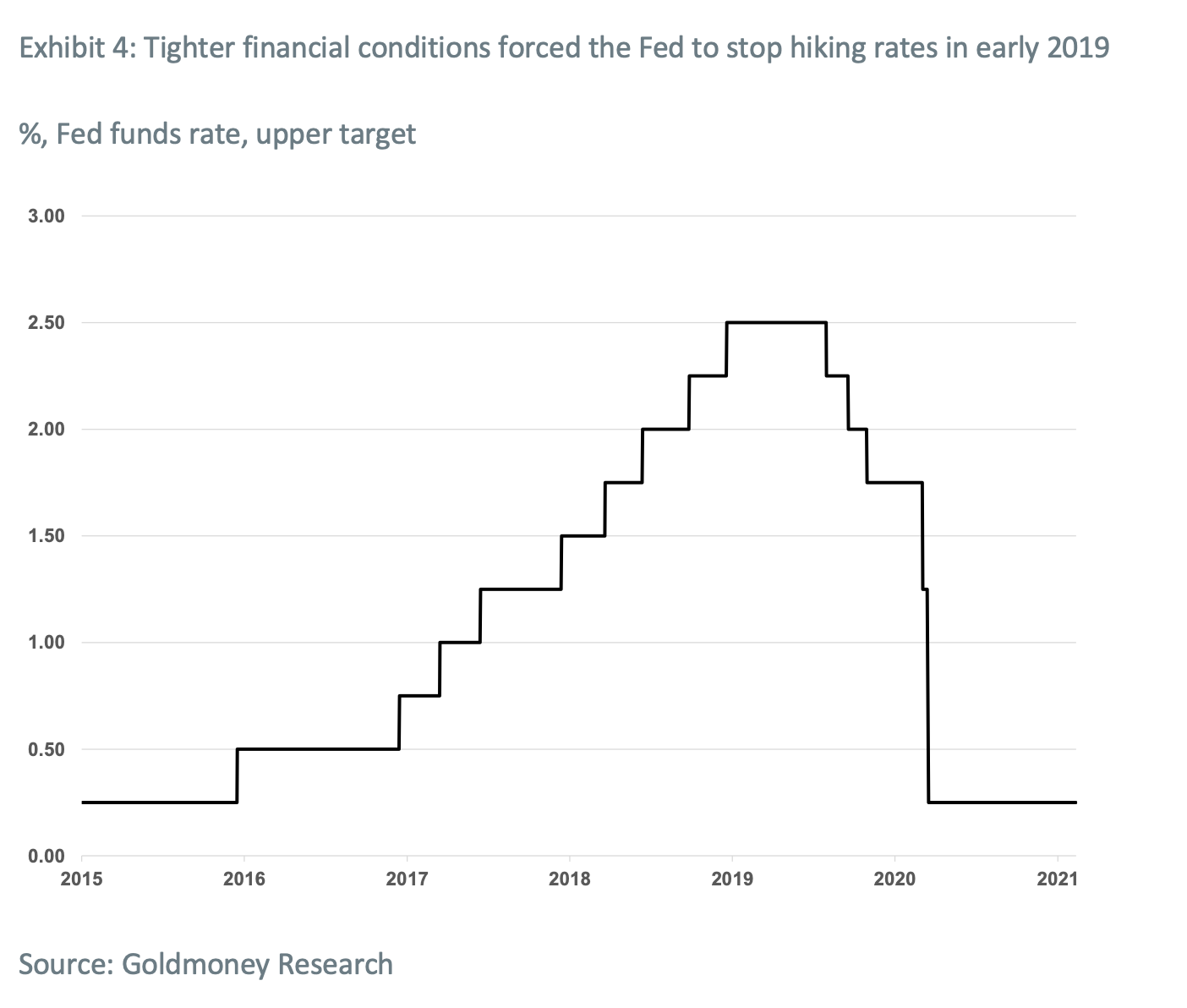 On July 31 that same year, financial conditions had worsened to the point that the Fed had to cut rates for the first time in a decade. Shortly thereafter, it abruptly ended the sale back of assets on the balance sheet and started to aggressively buying assets. This swing in central bank policy came amidst substantial turmoil in the repo markets. Due to all of this, we concluded the Feds tightening cycle had ended, and we would see a period of rate cuts and continued asset purchases by the central bank, which in turn would push precious metals prices higher.

As we have outlined before, when gold and silver rise due to increased monetary demand, silver tends to outperform gold (see exhibit 5). Hence, the combination of strong monetary tailwinds and the potential for gold prices to catch up as industrial headwinds had disappeared, led us to the conclusion that silver prices had explosive upside. 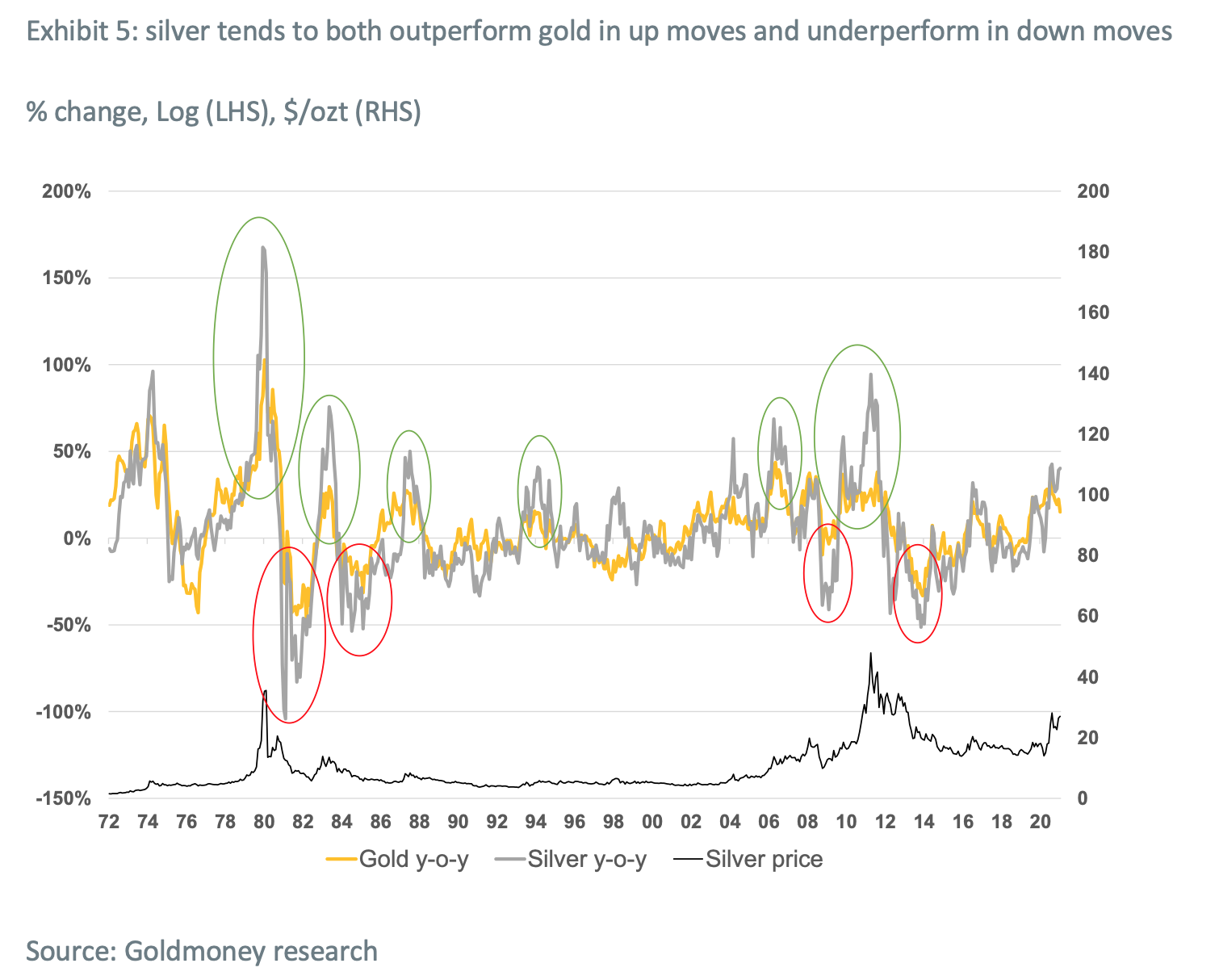 What came next we could have hardly predicted. Initially, the Covid-19 pandemic sent asset prices spiraling. Both, gold and silver, crashed. Silver even more so than gold, because now, once again, industrial demand was at risk. However, central banks almost instantaneously reacted as we would have expected and began to aggressively flood the market with liquidity, slashing rates to zero and buying assets at an unprecedented speed (see exhibit 6). 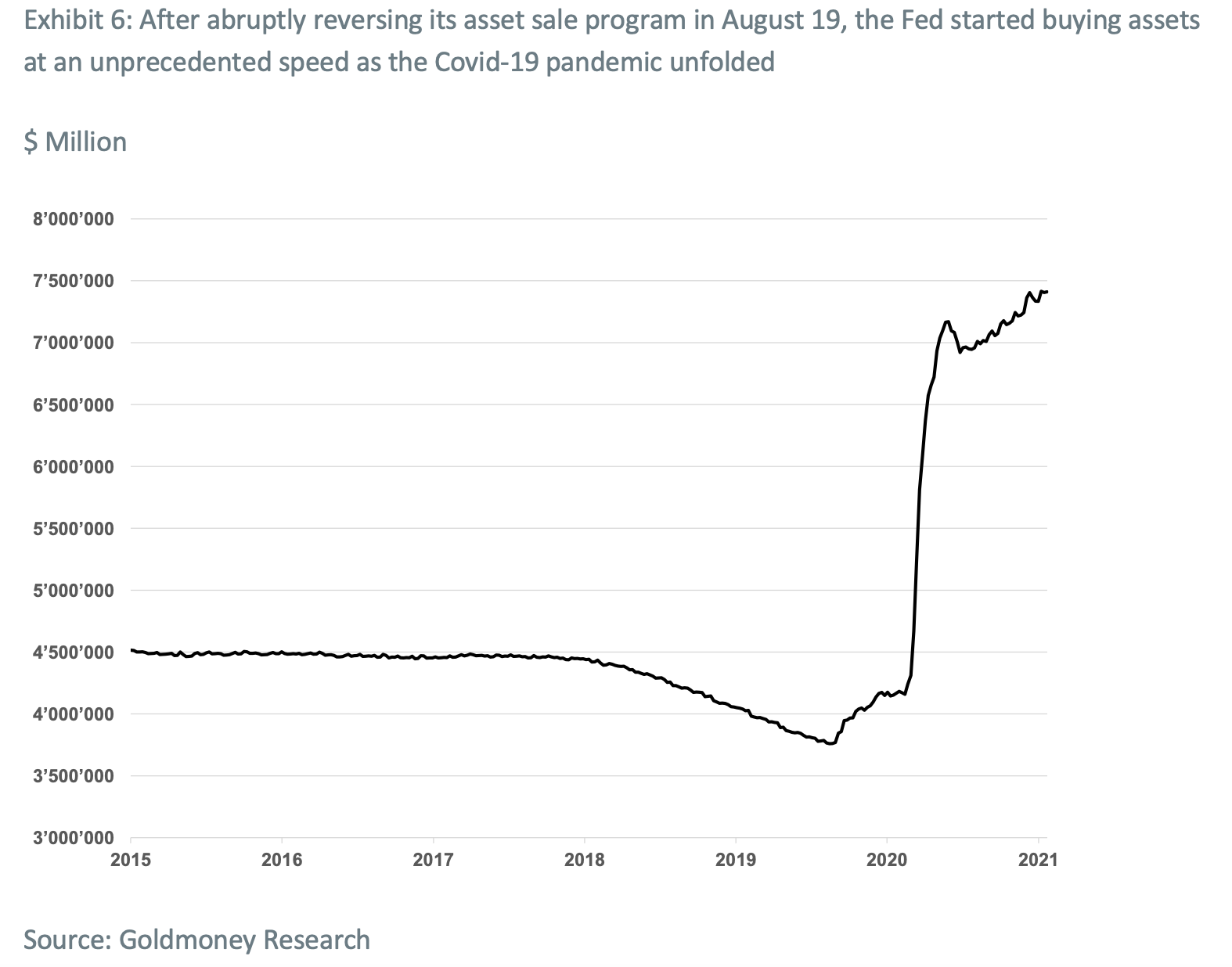 Thus, the bear market in precious metals proofed to be very short lived, and by mid-2020, gold had made a new all-time high and silver had doubled in price. This sharp upward move in silver closed the gap between the actual price of silver and what our model predicts (see exhibit 7). 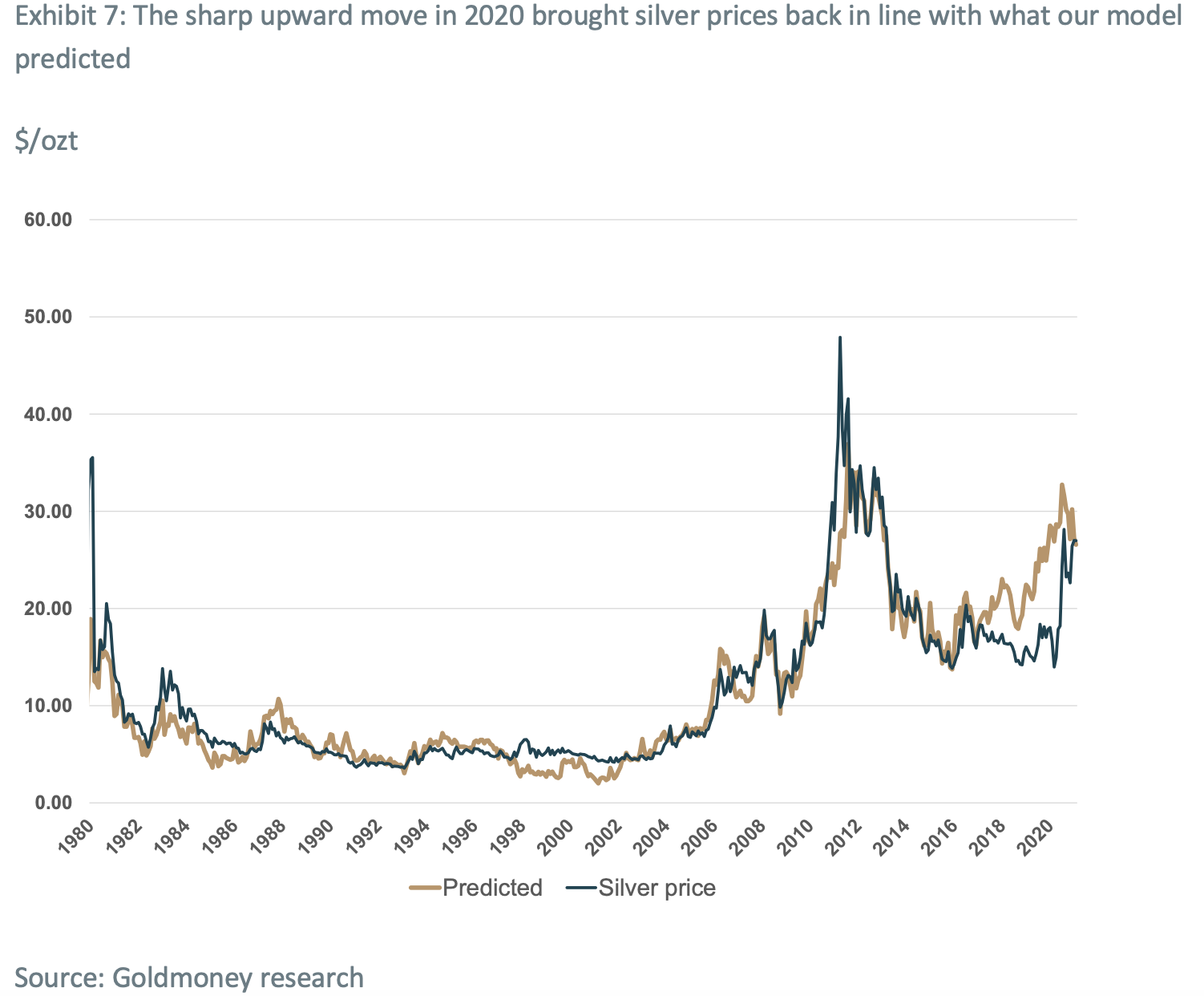 Fast forward to today and the outlook is very bullish for precious metals. As we have outlined in our recently published report on gold (Gold Price Framework Update – the New Cycle Accelerates, January 28, 2021), we believe the 25% rally in gold last year marks only the beginning of the current gold price cycle.

We expect the risk for all drivers for the gold price to remain firmly skewed in favor of gold. Real-interest rate expectations are currently at their lowest point in history, but historical central bank action after a recession suggests that there is a lot of room to the downside. Longer-dated energy prices crashed as the global Covid-19 pandemic unfolded, which will accelerate the energy supply crunch we have been expecting for the coming years. And there is no evidence that the long-term trend of growing central bank gold reserves is reversing anytime soon.

This bodes very well for silver prices. While industrial demand for silver will be likely to remain subdued for some time due to the sustained damage to the global economy, this will be more than offset by monetary demand going forward.

Importantly, while the gold-silver price ratio has come off substantially from its highs in early 2020 of around 120 to around 70 as of today, it is still well above the long-term average and it is well above the ratio when gold peaked in 2011. Back then, the gold-to-silver ratio had fallen to 40. A reversal to a ratio of 40 alone would imply silver prices of $46/ozt. However, we expect such a reversal would only come on the back of substantially higher gold prices, which in turn also implies even higher silver prices.