SavingsTech, Back to the Future Edition

Time is money, so what can we learn about money from a time machine?

The film's celebrated optimism and humor regarding the future has made a lasting cultural impression, including hoverboards, futuristic consumer electronics, and the (soon accurate?) predictions of a female U.S. President and the Chicago Cubs winning baseball's World Series.

It's fun to forensically diagnose technological predictions of the past, so we decided to tackle a form of technology also important to Marty and the film, the technology of money.

The film had many fun predictions, some of which landed just a bit off the mark, such as $50.00 for a bottle of Pepsi. But how have prices actually changed in since the mid-1980's, and why?

With the benefit of hindsight, what might 1985 Marty have done to protect his savings over the past 30 years (aside from knowing future sports scores, part of the plotline of the movie, and the film's other prediction of inequality, moral hazard and a general dystopia created from one-way bets)?

We start with a simple question; would Marty have been better off landing in the future with dollars, gold, or a savings account left to compound interest for 30 years (assuming of course his bank remained intact through the 1990's and 2000's crises)? The result proves an important point in our core thesis, that gold is not an investment that grows over time, it is simply a store of value, something to protect your wages without taking a risk that your currency, bank savings, or investments are being managed poorly.

The Economist Magazine created a popular index of prices around the world by referencing one simple metric, the cost of a McDonald's Big Mac. Applying the same index across time; if 1985 Marty showed up at a McDonalds today (or, tomorrow I guess!), how many Big Macs could his 1985 dollars, gold, or compounding savings account buy now? The results are as expected (see figure 1), the dollars are designed to lose value over time by the policy that guides them, which they did, a bank savings account performed better while banks paid interest, but with risk, and the price of a Big Mac in gold is basically unchanged (even after three decades and a radically different world politically, economically, and technologically). When it comes to savings, especially for tangible natural goods such as food and energy, gold has always been money technology defined by physics and geology, not creed or economic theory.

Figure 1: The price of a Big Mac in grams of gold is basically unchanged from 1985

Prices and the Technology of Money

We often forget that money and currencies are just another form of technology. And like other forms of technology, currency undergoes changes every decade or so. The dollars that Marty used in 1985, his standard measurement for value, are quite different than the dollars we use today, but we might not think about it because we use the same brand of currency and adapt along with it, while rarely testing other models. We know that Marty can no longer buy a new black pickup truck for less than 10,000 dollars, and he won't be buying a central California home for less than 100,000 dollars like his parents did. Is it because these things changed so significantly in quality or inputs, became scarce with more population and competition for them, or did the biggest change come from the money (technology) that measures them?

We learned from the Big Mac index that gold holds its value particularly well against other commodities, especially over long periods of time. Or conversely, food prices seem to only go up against currency, but are much more stable when saving with gold. Does this hold for other prices, Marty's movie ticket for that Jaws sequel 30 years later, the gasoline being pumped by robots at Texaco? What about the big expenses; the suburban house, tuition for Marty Jr., or health care for George McFly's back?

The prices that Marty would find outrageous, just as we do in our never ending bewilderment over today's lack of affordability, movie tickets, gasoline, new automobiles, even housing, all would have barely changed for Marty if measured in gold (see figure 2). Unfortunately there remain costs such as education and healthcare where simple gold savings just doesn't keep up, proving that even gold cannot compete with the value of a good education or a healthy life (though these sectors could use a bit better technology as well!).

Figure 2: Marty can buy roughly the same things if he brought gold to the future 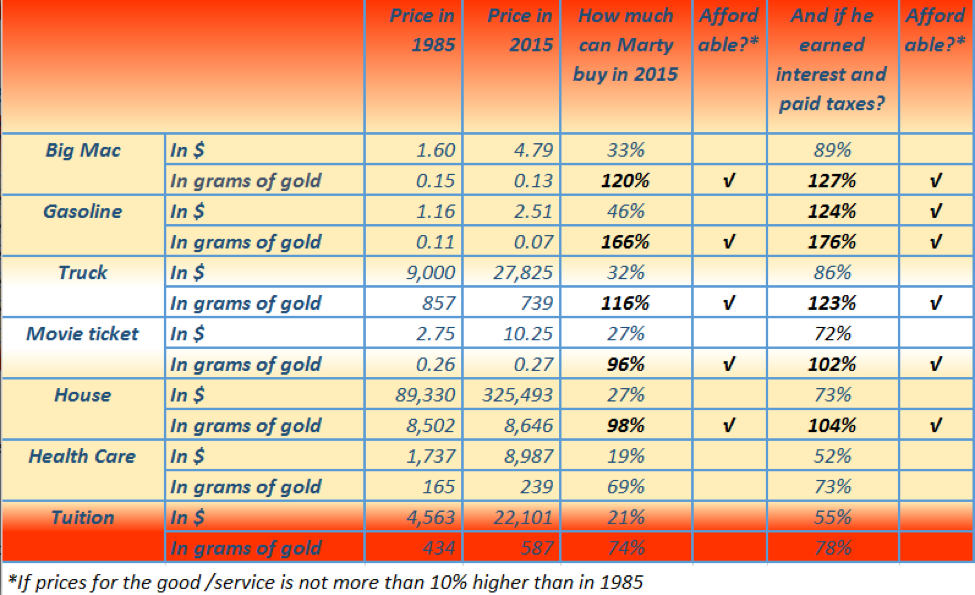 Wages and the Technology of Savings

In 1985 it would have been hard to imagine the level of experimenting and reconfiguration taking place today in the technology of the US Dollar and other world currencies. If Marty walked into a 2015 bank to find .08% interest rates on deposits he would likely conclude that bankers had been outlawed along with the lawyers, as envisioned (yearned for?) in the movie. Savers in 1985 received 125 times more interest on their deposits when lending to their banks. Marty would then be even more shocked to find that despite this absurdity, essentially paying to lend out wages as deposits, we spend more money on banks and financial services as a share of economy than ever before.

Today bank savings rates are all but non-existent as policy makers attempt to stimulate growth by cutting interest rates under ever-increasing public and private debt burdens. Inflation in real things has never gone away, especially the things that last and matter most, but the one price that hasn't kept up is the price of wages. Comparing prices another way, we try to project 1985 prices to 2015 levels using the consumer price index (CPI). We find that the CPI index is fairly meaningless for linking things like housing, food, or tuition, significantly undershooting them all, but does match the slow "growth" of wages (see figure 3 & 4). Which of course means that wages have not keep up with the price of essential things in life, and therefore it is more important than ever to save wages prudently, even when urged not to by negative real savings rates.

Figure 1: Prices for essential goods have gone up much more since 1985 than the respective CPI measures suggest

Figure 2: The only thing that stayed in line with CPI were wages, meaning that somebody with a median income is falling behind the cost or real things

At GoldMoney we believe that prosperity and progress can only be achieved through hard work, savings and progressive innovation. There are no short cuts, there is no almanac from the future to deliver one way bets or risk free returns. We can only deliver on our hopes for the future through incremental progress and cooperation using a sound measurement system.

Gold is not an investment, it's not a quick fix that will make you rich, and it won't buy you more hamburgers, cars, or a better house in the future. But it has proven time and time again that it can store the value of labor in savings better than any other currency or banking technology. Gold is simply an extremely rare, dense, and high-utility element that takes a lot of energy and labor to produce. Once it is produced however, it takes very little effort to maintain (compared to all other elements or things that decay or disappear) and therefore used over and over in calculations and transactions with almost infinite scalability. Gold powers cooperation by being the ultimate barter or exchange between savings and consumption of other necessities (see Why Gold, by BitGold). While the mass of consumer goods of 1985 are essentially worthless as anything more than collectables at this point (October 1985 launch of Nintendo Entertainment System excluded, naturally :)), we still exchange the gold mined in 1885, the time when Seamus and Maggie McFly settled Hill Valley.

Or another way to look at it, gold is a highly efficient way to exchange the value of labor and energy over long periods of time. So how much energy powers this savings time machine? Well, if Marty bought a kilo of gold instead of his 1985 Toyota, we could calculate the energy value of this savings. Using 2015 average futures prices for oil and gold to date, we find that a kilo of gold is equivalent to roughly 712 barrels of oil. Using the Depart of Energy's energy equivalent standards for oil, we find that a barrel of oil is 5.8 × 10^6 BTUs or 1.7MWh.

One Point Twenty One Gigawatts!!!!