Palladium to underperform the PM complex

In recent weeks palladium prices have soared to levels only rarely seen. This is all the more impressive in that precious metals prices more generally have moved sideways, including palladium’s big sister platinum. There are fundamental explanations offered but we do not believe these justify sustained high prices. More probably, non-physical speculative traders have chased upward momentum of late, leaving palladium exposed to highly asymmetric downside in the event these traders choose to exit.

Over the past few years palladium prices have traded in a range of from approximately $460 – 880 /oz. As a relatively thin market when compared to other precious metals, it is normal for palladium prices to go through large swings from time to time. Much of this volatility is just noise but there are some price drivers that can be identified as significant for medium-term trends.

Beginning with the supply side, it is important to understand that palladium production is concentrated in just a few mines, primarily in South Africa, Russia and Canada. Production can thus be materially affected by a change in conditions in just one major mine in one of these countries. That said, the vast bulk of already-produced palladium resides in autocatalysts, the overwhelmingly dominant industrial use of the metal. Modern techniques make autocatalyst palladium relatively easy to recycle, and so the natural churn in the above-ground stock provides for some stability in the ‘effective’ supply, notwithstanding the natural variations in mine production. However, any severe impact on mine production, such as a strike or other operational setback would have a material impact on overall supply, including that of recycled palladium. 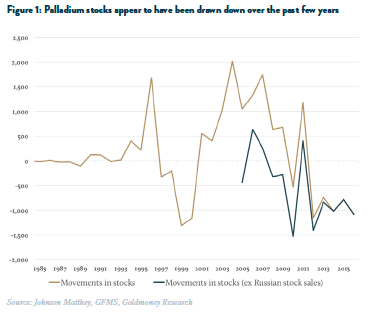 The demand side includes a larger number of factors. As mentioned above, most palladium demand comes from autocatalysts, with jewelry and bullion comprising only about 20% of demand. As stated above, autocatalyst palladium can be recycled, so the swings in industrial demand tend to come from the following factors:

The above factors can be volatile for a variety of reasons. First is the global business cycle, in which the changing rate of global auto fleet expansion can be significant. Second are trends in vehicle size and motor type, which may have a cyclical correlation but can also have their own idiosyncratic drivers.

Taking all of the above into account, a ‘perfect storm’ for higher palladium prices would be one of strong global growth, rising demand for relatively larger cars (thus larger motors) and increasing preference for gasoline (petrol) motors on the demand side, combined with operational problems on the supply side.

At present, there does indeed appear to have been such a storm on the demand side. Auto fleet sales have been strong, in particular in Asia. Lower oil prices have supported demand for larger motors in Europe and North America. And the fallout of the emissions scandals from last year, in which it was discovered that VW, the largest European auto producer, was cheating on official diesel emissions tests has sharply reduced demand for small diesel in favor of small gasoline (petrol) motors. There have not, however, been any issues on the supply side that would materially affect prices. Thus we should conclude that the strong run-up in prices of late, to the extent it is fundamental- rather than speculative-driven, should be understood as primarily a demand-side phenomenon.

Note that these factors are also highly palladium-specific and do not pertain to the precious metals complex generally. When looking at the recent development of palladium prices versus the other precious metals, one sees the clear outperformance of the former in a historical comparison. (There was a prior period of much stronger relative outperformance in the early 2000s when Ford and other auto manufacturers stockpiled palladium supplies in anticipation of a Russian supply embargo which did not, in fact, materialize.) 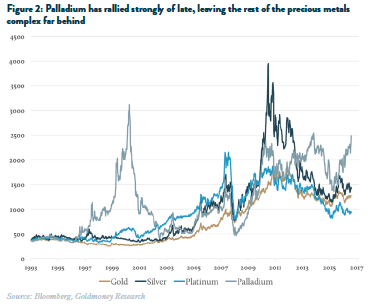 While fundamentals may well have driven the price higher, beyond a certain point we believe that speculators began to enter the trend trade in size. This is for three primary reasons: 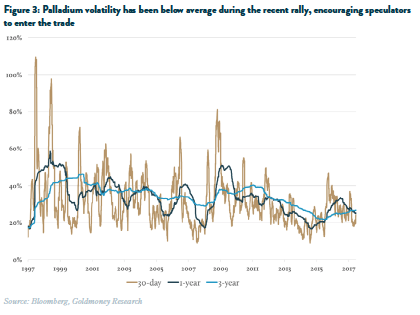 Returning to the fundamentals, note that we refer to the perfect storm above in the past perfect tense ‘has been’ instead of the present tense ‘is’. This is because we now see multiple indications that auto fleet sales are slowing in the U.S..

According to data from the U.S. Bureau of Economic Analysis, U.S. car sales peaked around late 2015 and growth rates have been negative on a year-over-year basis since early 2016. The Wall Street Journal reported on June 14, 2017 that most car companies have responded to this by curtailing output ahead of the summer months. General Motors, the largest U.S. manufacturer, will be extending some plant shutdowns in summer due to high inventory and slow sales. According to the newspaper, GM’s inventory is up 44% year-over-year.

There is another problem on the horizon that could further exacerbate the inventory overhang: High car sales in recent years has resulted in a substantial used car fleet expansion. As Bloomberg reported on January 23, 2017, there is a glut of used cars (3.36 million in 2017) that will return to the market as current leases expire.

If this inventory situation continues, the perfect storm will at a minimum moderate. Such a moderation would make it unlikely that an $800/oz+ palladium price would be sustainable. Something more in line with historical ranges, say in the 600-700 area, would be a reasonable target.

It should be noted here that palladium can be notoriously volatile at times, experiencing sharp rallies or corrections. If we are right and unsustainable speculative interest has been driving the price higher of late, then an asymmetric correction to the downside appears much more likely than a continuing upward trend.

Investors may wish to be cautious, however, when shorting any precious metal. This is because the fundamental macro factors supporting precious metals point to asymmetric upside. Real interest rates are likely to remain extremely low in a historical comparison and may well decline further from here if the global economy continues to slow, as it now appears to be doing. Oil prices, having settled into a range below average production cost, may temporarily decline further on weak demand but have much further to rise in future due to slowly-building pressures from replacement costs. For more on this asymmetric for gold and for the precious metals complex by extension, please see this recent note from my colleague Stefan Wieler here.

Rather than to outright sell palladium, we may see investors considering rotating out of palladium holdings into the other precious metals. Alternatively, we may see the aggressive trader shorting palladium versus the other precious metals and perhaps even for other industrial metals, such as copper, for which prices remain at historically depressed rather than frothy levels. Owners of physical palladium that have the intention to hold on to the metal could consider selling their physical while simultaneously taking a long position in a futures contract a few months out, thus locking in the differential between the two prices.