We exit 2016 on a tide of investor optimism. At long last, there will be a businessman in charge of the US economy in the form of a new president, and the stimulation he will provide is of tax cuts and infrastructure spending.

If interest rates must rise a tad, who cares? More important for equity-driven investors is the improved outlook for corporate profits from a combination of fiscal stimulation and a business-friendly administration.

If the recent performance of equity and bond markets is any guide, this view dominates investor thinking. Since the financial crisis eight years ago, the rise in equity markets had been driven by ZIRP and the expansion of credit aimed at financial assets. Now equities are on firmer ground, but this is a view that completely ignores the monetary flows upon which asset values depend. The reason asset values are at current levels is because there has been an excess of monetary inflation over that absorbed by the non-financial economy. Furthermore, demand from non-financials has been constrained by the continuing wealth-transfer effect of monetary inflation from ordinary people, benefitting the banks and the earlier recipients of the new credit created. This devaluation of earnings and savings is under-recorded by government inflation statistics, but the large majority of people in ordinary occupations outside financial centres have been progressively impoverished, relative to the minority benefiting from the inflation of financial assets prices. No wonder the economy stagnates.

The emphasis is now due to swing from monetary towards fiscal stimulation. Instead of money being bottled up in financial assets, it will begin to flow out of them into spending and employment in non-financial sectors, as well as into government, whose budget deficit will rise. The consequences of these monetary flows cannot be emphasised enough, leading to selling of financial assets in favour of financing non-financial activities. I covered this important point in a recent article, which yielded surprisingly little comment from regular readers. That analysis postulates that despite the improved outlook for the economy, equities and residential property prices are at or close to their peak, based on monetary flows. I urge all investors to read it if they have not already.

The effect of redirecting monetary resources previously inflating financial assets into non-financial sectors will be to increase consumer prices. Price inflation shifts, deflating assets and inflating consumer prices, developing a momentum of its own. We have already seen significant increases in dollar prices for industrial materials and energy in 2016. To this we must add the marginal price effect of increased demand for goods and services in a capacity-constrained economy. As products become relatively scarce compared with freely available money, the underlying price dynamics will become dramatically apparent.

The effect of price inflation is not, as commonly supposed, to drive up prices. Instead, it drives down the purchasing power of expanding government-issued currency. And in addition to these supply and demand considerations, there is the added dynamic of changes in consumers’ overall desire to retain money balances, relative to owning goods. Deteriorating public confidence in money is ultimately the greatest destructive force any fiat currency faces, and is the reason unsound money eventually collapses into uselessness.

Fortunately for all governments bent on monetary debasement, the public’s understanding of money is limited to it being the objective element in any transaction, and in consequence all populations are reluctant to even consider the possibility that government-issued currency might not be worth today what it was yesterday. Awareness that money is losing purchasing power only dawns on the public late in the price-inflation process.

The dollar’s accelerating loss of purchasing power could become a significant danger in future, because the Fed is predisposed to maintain interest rates on the low side, and raising the Fed Funds Rate to only 2.5% or so could be enough to trigger a debt crisis. The Fed is tasked with preventing financial and banking crises, and protecting the dollar’s purchasing power is a secondary consideration.

And that’s the problem. Mindful of the debt overhang, unless it is prepared to collapse the economy, the Fed cannot raise rates by much, perhaps 2% from current levels at most. If inflation measured by the CPI goes to over 4%, the general level of prices will almost certainly be rising by well over 10%, because the CPI statistic is designed to under-record price inflation by a considerable margin. While the rate of price increases is stable, it has not been an issue, but if it begins to rise, markets are likely to begin discounting higher rates of price inflation and become increasingly aware that the Fed is powerless to act.

In addition to the monetary flow problem discussed above, rising interest rates will therefore become an additional negative factor bearing down on asset values. We can expect the yield curve to steepen as well, and for the long bond to head towards 5% yields and more. Equities and property prices cannot rise in this environment, and must fall.

This year, bulls of precious metals have ridden a roller-coaster of hope followed by disillusionment. Much of the frustration has been due to the bullion banks seizing the opportunity presented by a strong dollar to force closure of their short positions on Comex. Meanwhile, for hedge funds, short-term positioning in gold has been an easy way to play the strong dollar, which is why money-managers morphed from earlier bulls to a mixture of bears and don’t-knows. Next year is shaping up to be an entirely different matter.

As discussed above, the defining economic feature of 2017 is almost certain to be increasing rates of price inflation and interest rates that are unlikely to rise by enough to stop it, without triggering a debt crisis. These are precisely the conditions that will disfavour government currencies, measured in gold, and have actually been in place to a greater or lesser extent for a considerable time. The chart below shows how the four major currencies have lost purchasing power since December 1969, indexed to 100. 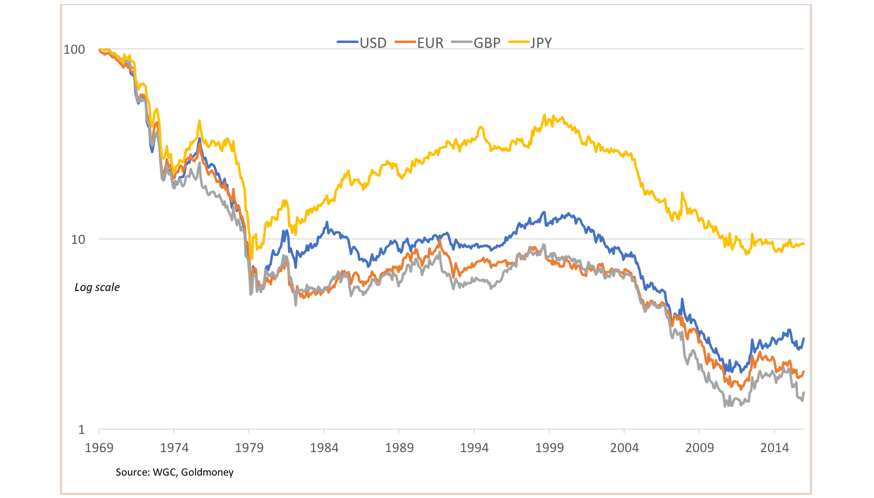 Since December 1969, even a strong yen has lost over 90% of its value measured in the one form of money which is no one’s liability. The worst performers have been sterling at -98.45% and the euro – including its components prior to 2002 – at -98%. What is shocking about currency debasement is so few people realise the extent to which it has happened.

Bear in mind that in a sound-money environment the general price level will tend to fall, reflecting the rising living standards resulting from economic progress. Putting short-term volatility to one side, gold is therefore a far better measure of currencies’ loss of purchasing power than government inflation measures, even if they could be truly accurate.

The 1970s was the worst decade for currency debasement, and the conditions that prevailed at that time look like being repeated now. The principal difference is there was less debt in the private sector, and it needed a large hike in interest rates to swing consumer preferences back into holding government-issued money. The next chart shows Volcker’s inflation-killing interest rate hike at the end of that decade, followed by the subsequent interest rate peaks that were required to stop credit cycles from degenerating into escalating price inflation. 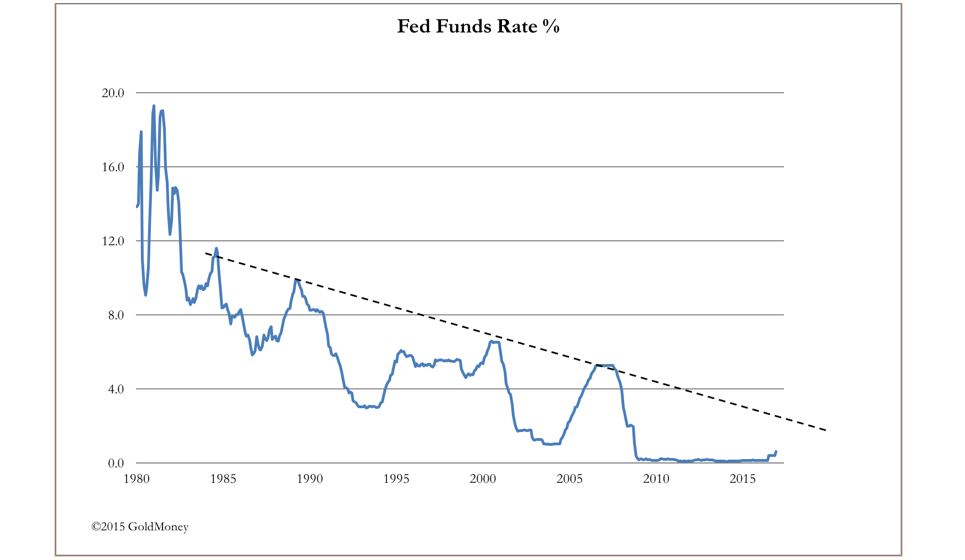 The dotted line, which marks the Fed Funds Rate at the declining peaks of US credit cycles, is currently at an FFR of 2.5%, which has fallen from 5.3% in the first half of 2007, when the last financial crisis began. By the end of 2017 it will be at 2.25%. The reason the line is declining is that total debt outstanding is continuing to escalate, with a growing proportion of it unaffordable at not much above current rates. The dotted line is telling us that at anything over 2%, the FFR is likely to tip the US economy into another financial crisis.

These strains are also acute in Europe, where the banks are less adequately capitalised and face regional crises, such as the current one in Italy. Bond yields have risen in Euroland as well as in the US, and it is quite likely the Eurozone banking system will succumb before the FFR reaches 2%, because the banks face catastrophic bond losses on their under-capitalised balance sheets.

The central banker’s response to the inevitable forthcoming crisis, wherever it arises first, is certain: throw yet more money at the problem. After all, it worked following Lehman, there is no alternative solution, and the central banks’ overriding priority is to keep the show on the road.

In 2008/09, the financial crisis was initially confined to identifiable banks and institutions in the US housing market. Next time, when a financial crisis occurs, the problems will be more widespread, encompassing bond markets, property, equities and governments themselves. It will be ebola compared with a flesh wound. There will be no option other than to rapidly expand the quantity of money on a global basis, with central banks buying up government debt, ultimately fuelling price inflation even further. Therefore, physical gold will not only afford protection against the escalating price inflation that few investors are expecting, but also against the risks and consequences of global systemic failure. Such a crisis may not occur in 2017, but we can see the direction of drift.

These are not forecasts, but an expectation of how events will unfold. Anyone who makes financial and investment forecasts fails to understand the nature of money, money flows and prices. But I can come up with my current expectations for 2017, on the understanding that my expectations today will evolve as events unfold. With that caveat, the following table summarises how I currently see things developing in 2017.

It could turn out worse. The conditions faced by America today have many parallels with those faced by the UK in 1972, too many for comfort. At that time, equities peaked and subsequently fell over 70%. From equity peak to financial crisis took nineteen months and the bear market in equities lasted 31 months. The Bank of England was forced to raise its base rate from 5% to 13% by late-1973, which triggered the commercial property crisis. The effect on sterling is recorded in the first chart in this article.

Happy Christmas to one and all, and may we all survive 2017 without too much financial distress.