No escape from the dollar as the currency standard

All commodities and near-commodities are priced internationally in dollars, and the dollar is used for over 80% of cross-border trade settlements. Consequently the dollar is the base currency for all countries' foreign reserves, giving it its reserve status. However, there are now challenges to the dollar's hegemony, with Russia, China as well as the other members, dialog-partners and associates of the Shanghai Cooperation Organisation (SCO), taking deliberate steps towards doing away with the dollar entirely for pan-Asian trade. Recent developments setting up a rival to the IMF by the BRICS nations is part of this challenge.

If you follow the geopolitics, you might reasonably conclude that the dollar's dominance has peaked and is now declining. The SCO appears to believe there can be a transition away from the dollar, an idea that could turn out to be dangerously wrong at a time of great but generally unrecognised currency fragility. At the heart of the issue there is a worrying lack of distinction between the dollar's reserve function and its function as the monetary standard from when it replaced gold in 1971. To fully appreciate the importance of the dollar as the standard for all other currencies, we must review the monetary history behind how and why the dollar replaced gold, and the implications for today.

The US dollar progressively broke its relationship with the gold standard from 1933 onwards, when gold ownership by US citizens was unexpectedly banned. The Bretton Woods Agreement after 1944 then defined the gold-based monetary order until the Nixon Shock in 1971. President Nixon ended Bretton Woods and all rights to dollar conversion into gold. By default, all other national currencies went on a US dollar standard, albeit a floating one. Crucially, the confidence in the purchasing power of all fiat currencies became vested in an underlying confidence in the purchasing power of the US dollar. This is a separate monetary function from the dollar's reserve status, though the two functions are intertwined and may be difficult to separate in practice.

There are obviously differences in the way the gold standard operated compared with the dollar standard of today, but the function is the same. Before the Nixon Shock, the relationship between the gold standard and the US dollar was illustrated famously by John Exter, who showed gold at the apex of an inverse pyramid, supporting ever-increasing categories and quantities of dollars and dollar liabilities. Between 1932 and 1971 the quantity of money and bank credit expanded, and this is shown in the graphic below, based on Exter's illustration, but with a pure monetary emphasis. 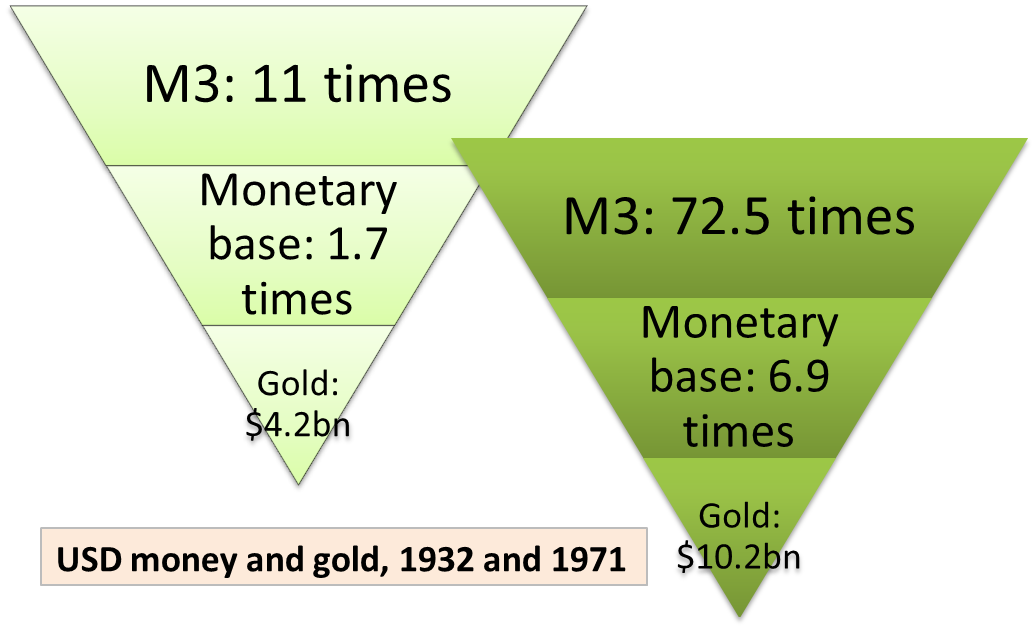 In 1932 when gold officially exchanged at $20.67 per ounce the relationship with the monetary base was by today's standards very conservative. However, the fractional-reserve credit expansion at an additional 9.3 times (note that M3 includes the monetary base) was a threat to the entire US banking system when the banks were facing escalating bad debts because of the economic depression. And since the dollar was technically a money-substitute (with gold being the freely-exchangable underlying money), the dollar risked being exposed as over-issued and therefore valueless. For this reason, President Roosevelt's Executive Order forcing American residents to surrender their gold and rescinding all rights to exchange their dollars for gold, was the only feasible option open to his government, the alternative being the collapse of the banking system. In January 1934 he revalued gold to $35 per ounce, making the Exter pyramid relationships more sustainable.

In 1944, the Bretton Woods Agreement formalised arrangements for central banks to fix their currencies to the dollar and for them to continue to have the right to exchange dollars at the Fed for gold at $35 per ounce. So central banks while originating their own currencies were still on a gold standard, through the US dollar. By 1971, when President Nixon ended this limited gold convertibility, the Fed's monetary base and broad M3 money had become exceedingly stretched at nearly seven times and 72 times respectively.

The alternative would have been to revalue gold from $35 to a level where the US would suffer no more outflows, taking a leaf out of President Roosevelt's book. Revaluation of gold was ruled out and rigorous attempts were made to discredit gold instead. The dollar therefore replaced gold as the de facto standard for all currencies. Freed from the discipline of gold, the Fed was able to continue to expand its monetary base and US banks their bank credit, while growing foreign demand for dollars to purchase energy, other commodities and for trade-finance, underwrote its purchasing power. And because the demise of Bretton Woods led to the end of fixed exchange rates, the expansion of US dollar quantities was mirrored by the expansion of cash and credit in other currencies as well, as non-US central banks managed their currency rates vis-à-vis the dollar base.

The next pyramid shows the relationship not only between US dollar quantities but also includes an estimate of the dollar equivalent of global broad money supply, and a new feature that did not noticeably exist in 1971: shadow banking. This quantifies the relationship between dollar money and the quantity of money in other currencies, with the dollar as the new currency standard.

In 2013 the relationship of US bank deposits relative to the Fed's monetary base was only 2.4 times. This was due to the rapid expansion of the Fed's balance sheet since mid-2008, having increased to 4.7 times the Pre-Lehman Monetary Base. The world's broad money at $168.5 trillion is geared nearly 40 times, including the Financial Stability Board's estimate of off-balance sheet shadow banking. To put it mildly, even after the rapid expansion of the Fed's Monetary Base, which dramatically lowered the broader money ratios from what they would otherwise have been, the international monetary situation is still dangerously geared.

The risk of a new currency crisis has been dramatically increased by the major central banks acting to maintain financial asset values, particularly in bond and stock markets. This transfers risk from investment assets into the currencies themselves, something that is certain to become evident in the event of a rise in interest rates. For example a 10% fall in over-valued sovereign bond prices could easily threaten the survival of some systemically important banks, triggering a new financial crisis. Obviously, this cannot be allowed to occur and there can be little doubt that the central bank response will be to flood the financial system with yet more money.

Alternatively, the global banking system is too highly geared to survive an economic slump, which is an increasing risk in both the Eurozone and Japan and may well spread elsewhere. Remember that the dollar M3-to-gold ratio of 11 times in 1933 was enough to force a system reset; today the global ratio is nearly 40 times, on an admittedly flexible dollar. Again, the solution will be to flood the financial system with yet more money.

So either way, recovery or slump, price inflation or deflation, the current currency equilibrium with its dangerously high monetary gearing is unlikely to continue for long. And as if this is not enough the major emerging and Asian economies are proposing a monetary schism, breaking half the world's population away from the dollar. The yuan, rouble, rupee and all the other Asian and emerging-economy currencies involved may be able to trade between themselves without the dollar, but they will be unable to ditch it as a back-up monetary standard. They will still remain on a dollar standard.

This is why despite determined efforts to do without the dollar nobody in Asia has come close to proposing a realistic alternative. Let us hope the powers-that-be in the Shanghai Cooperation Organisation understand the important difference between a reserve currency used for trade settlement and a currency standard; otherwise by bringing into the open the fundamental question about the dollar's suitability as a monetary standard, they could end up undermining the dollar and with it an extremely fragile global monetary system.