The outcome of the 2016 US presidential election has sent shockwaves through global financial markets. Gold largely reversed its 4% overnight rally and is now back to pre-election levels. This is evidence that gold prices are driven by macroeconomic realities rather than fear and greed. We believe that the election outcome changes little for the medium and long term path of the USD/Gold price as the real gold price divers remain strongly and asymmetrically skewed to the upside.

The outcome of the 2016 US presidential elections has sent shockwaves through global financial markets.

As the odds for a Trump victory increased with election results trickling in on Tuesday night, equity and industrial commodity markets sold off and currencies fluctuated wildly. S&P500 Futures were down 5% at one point, oil futures were down USD2/ bbl and the Mexican Peso had lost over 10% in value. But the next day, most of these moves had fully reversed (with the notable exception of the Mexican peso) and the Dow Jones index closed at an all-time high. The gold price also swung violently, up 4% overnight and nearly back to flat at the time of writing. For many gold commentators that would cite fear and greed as the main drivers of gold price changes, this must be surprising. Just 24h earlier, the market was convinced that now president-elect Trump had no chance at winning this election. Most polls gave Hillary Clinton a >95% chance of winning. So while a Trump presidency might mean all kinds of things for economic growth and thus equities and industrial commodities, how can it not be a shock to the gold market? If gold is really driven by fear and greed, by definition it should be up massively, no? 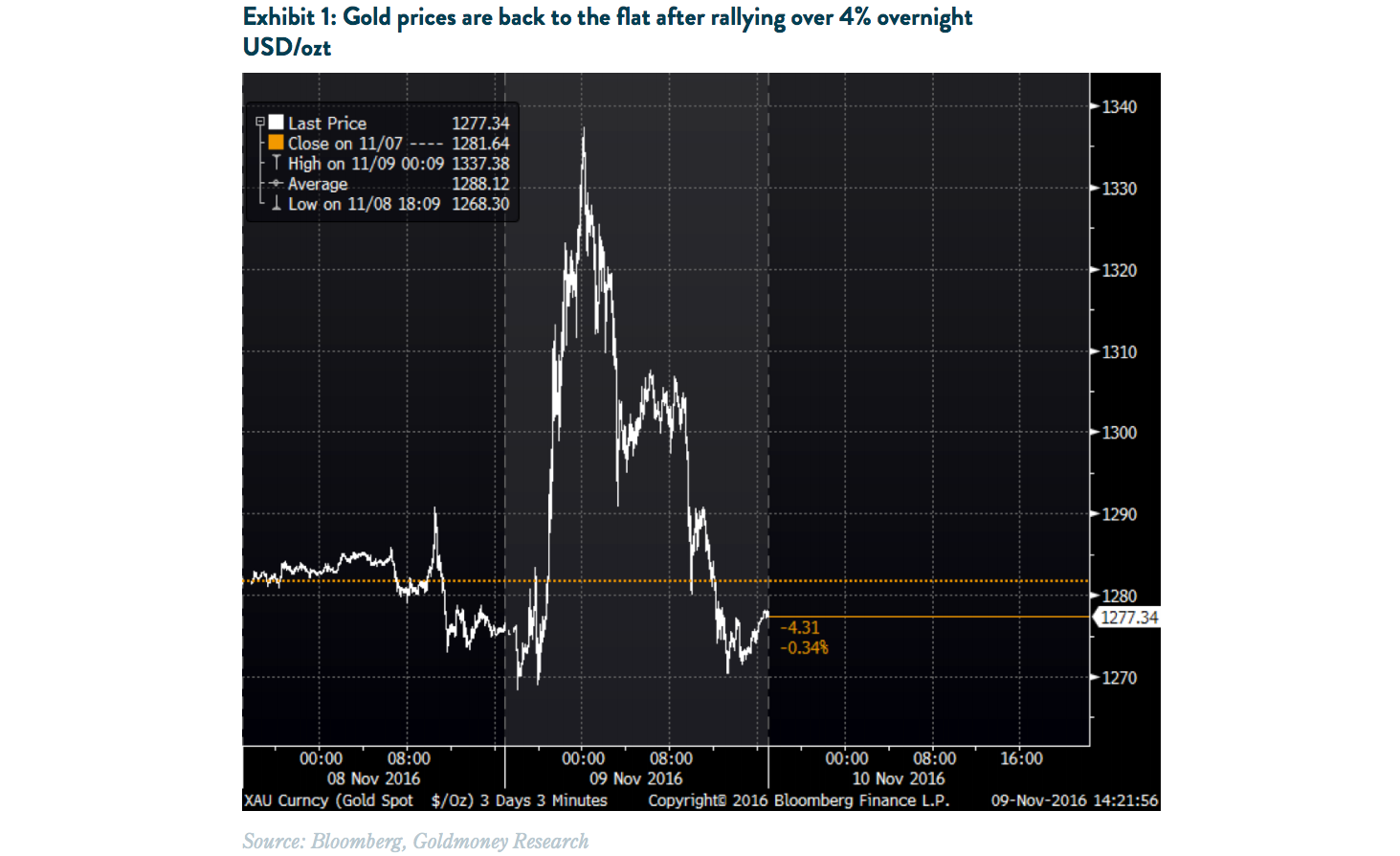 Yesterday is thus a textbook example that gold is driven by macroeconomic realities and not by fear and greed. In a series of reports over the past year we have demonstrated that changes in gold prices are mainly driven by three factors: Central bank policy (including the impact on real interest rate expectations), central bank gold purchase and longer-dated energy prices. The election results had no impact on central bank net gold purchases. Spot oil prices initially sold off sharply, but as of Wednesday afternoon, they were back to flat. More importantly, longer dated energy prices, measured as the 5-year forward prices of Brent crude, we are actually up USD0.70/bbl when markets closed Wednesday. Most of the move in the gold price, however, was driven by changes in real interest rate expectations.

It is debatable however whether real-interest rates should be up. Because it’s macroeconomic reality that ultimately drives gold prices, we believe that the election outcome has limited impact on the medium-term path for gold. The FED is still in the same situation as before. After seven years of near zero interest rates the FED has only managed to hike rates once, by 25bp. It is hard to tell whether the election outcome means that the FED is more likely to hike rates before year end or less. But in the most hawkish scenario there will be one more hike by year end. That makes one 25bp hike per year. What is clear is that the FED can’t raise rates quickly, much less restore them to a ‘normal’ level as the negative impact on asset markets would likely trigger a recession on its own. And by the time the US economy goes naturally into a recession, which after seven years is increasingly likely, it has no ammunition left to counter as interest rates will be nowhere near normal levels. Whatever the FED’s reaction will be, it will push real-interest rates sharply lower into negative territory. At the same time, longer-dated energy prices troughed in late 2015 and are expected to move gradually higher over the coming years as excess capacity is gradually worked off. Hence all the drivers for the gold price remain skewed to the upside.