Predicting the future is a mug’s game, and in financial markets we simply cannot know tomorrow’s prices. All we can do is make assessments of the factors that can be expected to influence them.

Economists’ forecasts today, with very few exceptions, are a waste of time and downright misleading. In 2016, we saw this spectacularly illustrated with Brexit, when the IMF, OECD, the Bank of England and the UK Treasury all forecast a slump in the British economy in the event the referendum voted to leave the EU. While there are reasonable suspicions there was an element of disinformation in the forecasts, the fact they were so wrong is the important point. Yet, we still persist in paying economists to fail us.

With the novation from the old year into the new, it is the time of year when highly paid, highly qualified investment analysts and strategists, many of them professing to be economists, come out with their forecasts. And here again, there’s another problem. Very few analysts have the confidence, or even the imagination, to make a forecast without regard to those of their peers. There is a feeling of safety in moderation, which, if you think about it, means adjusting forecasts without regard for true conclusions and inferences.

So, forecasting is a mug’s game, which is why this researcher never does it. Even for the best experts, the fact remains the future is unknowable. And even if it were, for financial assets, such as equities, economic predictions are not the most relevant. On a time-scale of less than eighteen months or so (the period covered by new year forecasts), fundamentals such as the outlook for profits and dividends for equities matter less than the outlook for bond yields. And bond yields in turn are heavily dependent on capital flows.

The subject is a large one, but for the purpose of focus and simplicity it should be condensed into its most important indicator. The chart below is probably the most important one to watch evolve in the coming months. 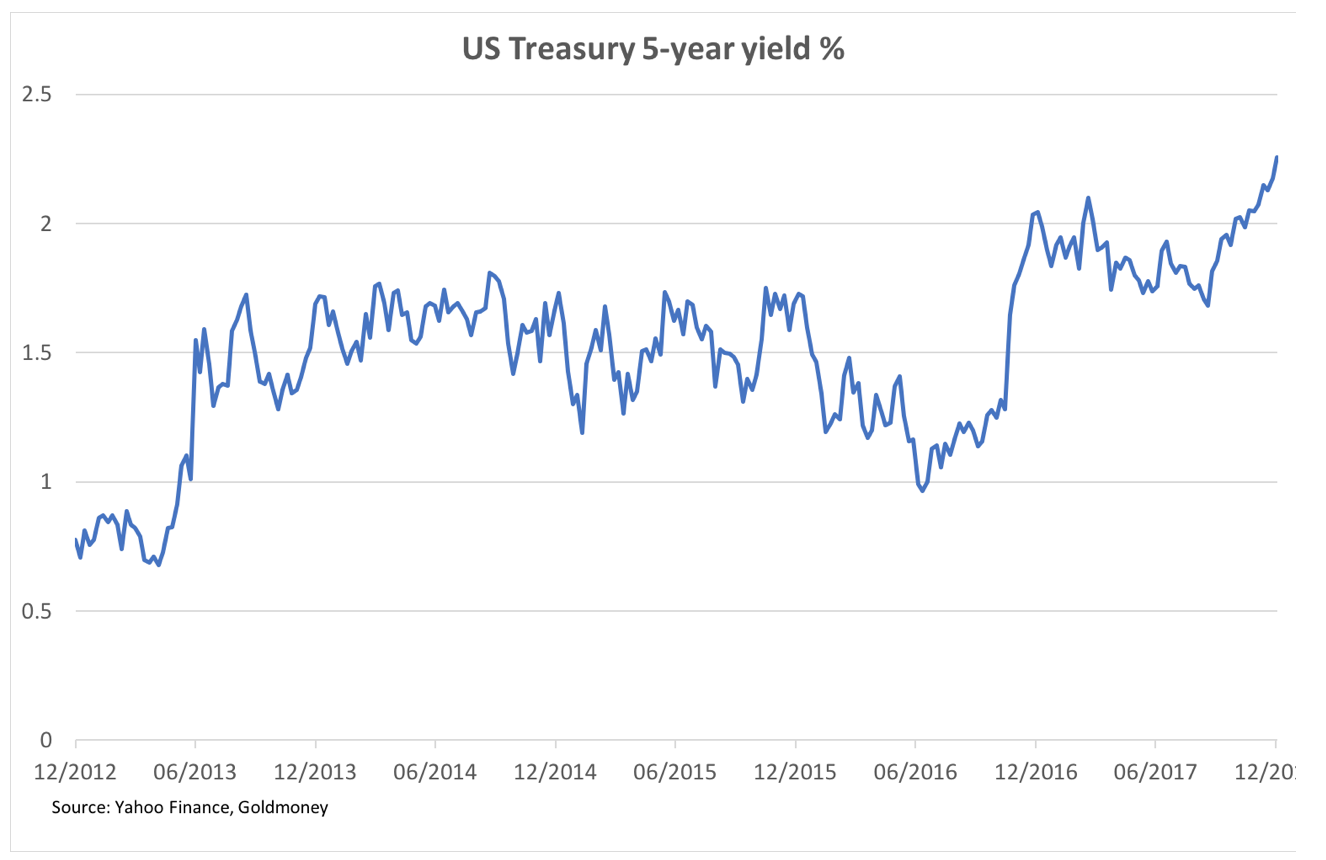 There are a number of reasons to select the 5-year US Treasury bond as the best indicator for capital flows. The best is it is the longest maturity that banks will normally hold on their balance sheets, as an alternative to lending bank credit to the non-financial sector. As such, it is the least directly influenced Treasury Bond by changes in variations in overnight lending rates you are likely to find in a bank’s portfolio.

In the last five years, the yield has risen from a low of 0.68% to a current rate of 2.25%. This means a bank has only avoided realising considerable losses by holding the bond to maturity, which was probably the bank’s intention when first bought. We can deduce this, because when banks buy low-risk government bonds, it is because they are averse to the risks of lending to the non-financial sector. Therefore, when they sell, the banks’ motivation is not investment-driven, but by the need to raise liquidity to be reapplied elsewhere.

However, if a bank had bought this bond in July 2016, it would currently be sitting on a loss of about 8% on its invested capital, always made considerably worse in terms of the cost to a bank’s own capital by fractional reserve gearing.

For this reason, increases in fixed-interest bond yields, even though they may be funded by lower overnight rates, become a banker’s nightmare. They pay the highest prices for capital safety in times of lending uncertainty. When confidence in lending to commercial enterprises returns, not only are banks forced sellers of bonds to make room for commercial lending, but they have to swallow significant losses. There is a human reluctance to face losses, but when changing circumstances demand it, the priority is to limit those losses as rapidly as possible.

Referring again to the chart above, the recent sharp rise in yields could be an important trigger point, looked at from a bank’s point of view. Since 11 September, when the yield began to rise from 1.68%, this bond will have lost 4.7% of its value marked against the price. If a bank has an overall ratio of 10% capital to balance sheet assets, then simplistically, this loss has absorbed 47% of the bank’s capital deemed to be allocated to holding the bond.

An ordinary person facing a loss on their money of this magnitude would probably panic. And bankers are fundamentally humans.

The yield volatility on the 5-year UST is admittedly the most extreme maturity exposure a bank is likely to face, and is selected here to illustrate a broader argument. Rising yields on shorter maturities also create balance sheet damage, so the point being argued is that at some point in the credit cycle, banks will dispose of bond investments generally, with important consequences for bond market flows and yields. In this credit cycle, there are additional supply factors, notably the Fed’s intention to unwind its balance sheet, and at a time when the government’s budget deficit should be reducing, under President Trump’s tax plans it will be increasing instead.

A rational banker with bond exposure will be selling, before losses get even worse. Yields on US Treasuries of different maturities are also regarded as the risk-free rates against which all other bonds are judged. So not only are the slower-witted US banks caught out by rising bond yields, but all other portfolio holders are as well. It is best to describe rising bond yields, on anything other than floating rate notes, as a transfer of capital from bond owners to the issuers. And given the sheer size of global bond markets today, this tax levied on bond ownership is significantly greater today than on previous credit cycles. On domestic US bond markets amounting to some $40 trillion, these losses are already significant.

It should be clear from this that significant hidden losses are accumulating in the financial sector, particularly when the Fed is trying to normalise rates, with further increases in its Fed funds rate in the pipeline. The banking response, particularly since mid-2016, has been to gradually abandon bonds and seek lending opportunities in non-financials, swapping Wall Street for Main Street, if you like. And as banks further reduce their bond portfolios, bond prices will continue to fall, while the GDP statistic, which is mainly a measure of money deployed in the non-financial sector, unexpectedly improves.

Therefore, if an economist had been prescient enough to forecast an economic improvement measured by GDP, with benefits accruing to corporate earnings and dividend prospects, he would have almost certainly encouraged investors to commit further funds to equities at or close to the top of the market. Such guidance is a lot less relevant than an awareness of fund flows, and usually gives a low rating to the inevitable consequences for price inflation.

The expansion of bank credit into the non-financial economy increases demand for commodities, capital goods and the rest, the price pressures usually becoming noticeable after a time-lag of several months. The supply of physical goods becomes limited by raw material shortages, just-in-time inventory management and low production capacity. Prices start rising, which makes holding bonds even more costly through loss of money’s purchasing power. Worse still, thanks to efforts to coordinate the global economy by G20 finance ministers and central bankers, these credit cycle losses have become a synchronised global phenomenon, and the implications for price inflation are therefore considerably enhanced.

The Fed has taken the lead in trying to normalise interest rates, yet the ECB in particular has been far too slow in adjusting its monetary policy. The result is an extraordinary, and potentially fatal systemic distortion. The German economy has been performing strongly for some time, yet the ECB has rigged bond markets so severely that the yield on the 2-year Schatz bond is still negative to the tune of 0.64%.

When it corrects, which is a certainty, the effect on the Eurozone banks could be catastrophic, given their very slim capital margins. Furthermore, peripheral banks are over-invested in risky government bonds “for safety”, and to game Basel 2 and 3 risk weightings as an alternative to raising core capital. Japanese bonds are also negative in yield, out to over 5-years maturity, so the Japanese banks are also badly placed to weather a global bond bear market. The only significant countries with reasonably decent bond yields are China, Russia, Mexico, India and Brazil. These countries won’t escape a bond market bloodbath, but at least the effects on them will be less severe than elsewhere.

Investors trying to protect their capital in 2018 would be wise to ignore economic forecasts as a basis for their decisions. Not only do economists exhibit an appalling track record, but for decisions with a time-horizon of a year to eighteen months, capital flows between financial and non-financial sectors are far more important.

Logically, when money flows from financials to non-financials, fundamentals for equities should improve. But all economic factors leading to improving fundamentals for corporations are typically more than negated by rising bond yields. On this credit cycle, the forces at work are likely to be considerably more violent than seen in living memory, given record levels of debt everywhere, the mistaken attempts to synchronise all the G20 economies into the same credit cycle, and the wholly wrong-footed Eurozone and Japanese financial systems.

May all our readers enjoy a more prosperous new year, than they otherwise would have done!