Gold versus the money supply

In a recent article I introduced the concept of allowing for the increased quantity of aboveground gold and the expansion of the quantity of dollar currency over time when trying to value gold. The purpose of this article is to explain why such an obvious adjustment is rarely contemplated and why it should be applied.

The reason no one adjusts the dollar quantity is we want to think of the dollar as having a constant value when we buy assets or goods. We describe prices of goods as rising or falling, and never the currency falling or rising. When we construct an index of house prices or stocks we do not take into account the debasement of the currency.

Except in times of price hyperinflation we are generally unaware of the corruption of economic calculation due to changes in the money quantity. The problem of valuing gold is however different, because gold remains the principal rival to fiat currency. It is therefore logical to adjust the gold/dollar exchange rate by both an appropriate measure of dollars and by the accumulating quantity of above-ground gold when making price comparisons over time.

The dollar, as the internationally-accepted fiat currency, is a good proxy for all the others, and the need to incorporate changes in the quantity of money has become urgent since the banking crisis, because the quantity of dollars has expanded rapidly.

If this argument is accepted, we have to decide what monetary measure is most appropriate. The approach I have taken is to add up the money-supply components that would be convertible into gold if full convertibility was the case. This amounts to cash, checking accounts and savings accounts, as well as the excess reserves held at the Fed. It is Austrian, or True Money Supply plus excess reserves, and it can be seen from the chart below that the US dollar on this measure is already in hyperinflation, because its quantity is growing substantially faster than its exponential trend, represented by the dotted line. 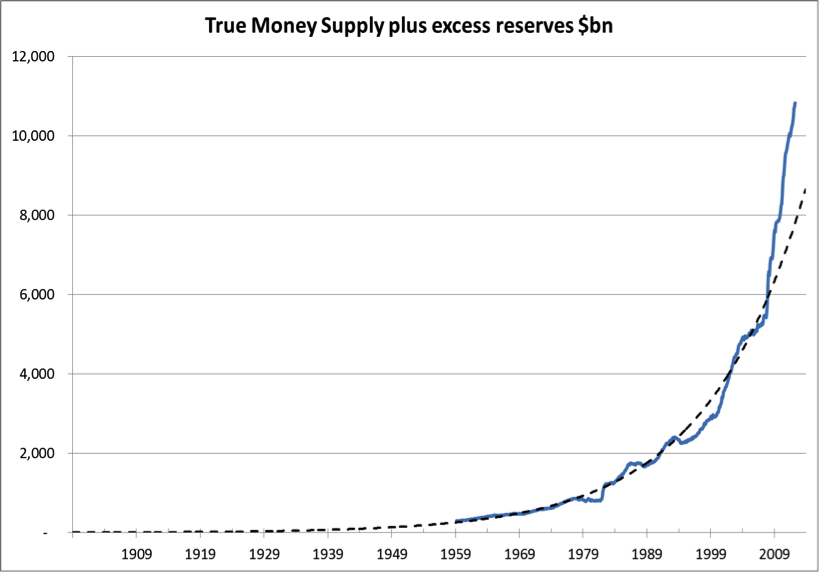 The fact that the US dollar is hyper-inflating adds extra urgency to the case for adjusting the dollar price of gold to reflect monetary inflation. This leads us to the second chart, covering the price of gold rebased to January 2000, when the price was $283.

For anyone trying to value gold as a hedge against banking and currency risks this knowledge is crucial. In real terms gold is at the level it was in April 2006, and below the levels seen during the banking crisis, yet the dollar on our measure is hyper-inflating.

Almost no one accounts for monetary inflation when evaluating the gold/dollar price, despite increasingly unstable monetary conditions. This is a mistake that will only be recognised by most people when prices eventually reflect today’s monetary inflation; but it offers a tremendous opportunity for those who understand the true relationship between gold and fiat currencies.