Gold save the Queen

HRH Queen Elizabeth II: “I saw all the Gold bars. Regrettably, not all of them belong to us.”

George Osborne, Chancellor of the Exchequer: “Some of them were sold, but we still have got some left.”

For the first time since George III in 1781, a British Monarch attended a British Government Cabinet meeting on the 13 December 2012, in accordance with Queen Elizabeth II’s wishes in her Diamond Jubilee year. She also visited the Bank of England vaults. The understanding being that she would not participate in the discussion. Being a Constitutional Monarch, the King or Queen does not interfere with affairs of government. Queen Elizabeth has been a tireless and selfless figurehead and ambassador for the UK and her discipline and integrity are respected throughout the world. So if she was going to break the rules and ask a controversial question, it was interesting that it was about gold.

Interesting but not surprising. If there is one thing that a monarch – whose dynasty goes back to 1837 and whose island has not been conquered for almost 1,000 years – should understand, it is power. Power comes from the ability to influence others and the basics are knowledge, violence and the Golden Rule: that is, those who have the gold make the rules. Knowing how much gold and silver you have at your disposal should be finance 101 for any ruler, and this has been true since the dawn of civilisation.

Dating back to Anglo Saxon times, the currency of the British Isles was based on silver. This was in keeping with the rest of Europe, and was a hangover from the Roman Empire. The silver penny was based on the Roman Denarii: 240 pennies equalled one pound of sterling silver. Thus the name “pound sterling.” King Athelstan introduced his royal mints and William the Conqueror introduced the 12 pence “shilling.” The content of the coins was taken extremely seriously. In 1124, an outraged Henry I had his mint workers castrated for producing low quality coins.

The Tower of London was the place for safe keeping of the nation’s wealth. In 1640, Charles I seized bullion belonging to merchants and noblemen to fund a war against Scotland. While the money was later paid back, the lesson was learnt and the merchants withdrew their cash and placed it in the hands of goldsmiths. Overcome with temptation, these goldsmiths started lending gold entrusted to them for safekeeping – the birth of fractional reserve banking. In 1672, C. Hoare and Co. was created, followed by Barclays and Coutts. In 1694, when King William III found himself in too much debt due to a war with France, Charles Montagu organised a consortium of bankers to lend the government £1.2 million in bullion. A Royal Charter was granted that the notes of receipt of this loan would be treated as legal tender and the Bank of England was born. For the first time in history, the Crown and the State had lost control of the creation of money to a small handful of bankers.

The gold standard reigned supreme in Britain for the 100 years spanning the end of the Napoleonic Wars to the outbreak of the First World War. Indeed, the country had been on an effective gold standard since 1717, when Isaac Newton was made the first “Master” of the Royal Mint; Newton established a new gold/silver ratio that drove silver out of circulation and made gold the primary medium of commerce. London became the financial capital of the world, and the credit-fuelled British Empire stretched until the sun never set upon it. From these conquered lands gold flowed back to London. The gold standard provided over two centuries of monetary stability: a taxi ride across London and a pint of beer cost the same at the outbreak of hostilities in 1914 as they did two centuries earlier.

The world wars and the rise of the welfare state resulted in a steady depreciation of the pound (though not always that steady, as the sterling crises in 1931, 1939, 1967, 1973 and 1992 testify to.) This coincided with an outflow of gold from Britain. For almost a century now, every financial problem that the UK has encountered has been met with the same solution: run up the debts – public or private – and print up the money to pay them off.

The following graphs, taken from the House of Commons 2006 report on the pound sterling, shows the inflation rate from 1750 and the depreciation in sterling since then. 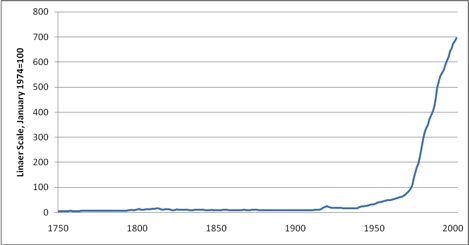 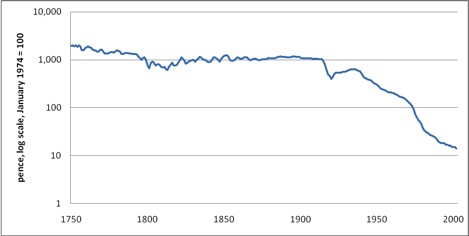 During the latter (high inflation) period, the Bank of England has been a lead warrior in the global financial elite’s efforts to keep the fiat currency illusion going. During the 1960s it was the centre of the London Gold Pool in which, in coordination with Federal Reserve and other major central banks, it attempted to keep the gold price pegged at $35 an ounce. It did so by the coordinated leasing of large amounts of central bank gold into the market – until their manipulation efforts eventually foundered in 1968, to be followed shortly after by Nixon pulling the US off the gold standard in 1971.

With unbelievalby naivety, from 1999 to 2002 Chancellor Gordon Brown oversaw the sale of three quarters of the United Kingdom’s gold, at an average price of around $250/oz. In 2012 the Bank of England invited the most famous lady in the world to inspect its vaults, accompanied by a film crew. James Turk reasonably asks whether it might be possible to send an auditor as well. Many more, including GATA, might like to look inside the government vaults in America.

Given all the tumultuous economic events that have occurred since her ascent to the throne in 1952 – and with central banks around the world now engaging in an unprecedented programme of “QE to infinity” – Her Royal Highness was right to comment on Britain’s gold. She might be able to tell the central planners in Basel and in the palaces of finance in the City of London and New York a simple truth about power – one that her ancestors would certainly have been familiar with:

“Those who have the gold get to make the rules.”