Gold is the only sound money

This article notes that the technical situation for the gold price has sharply improved, to the evident surprise of many mainstream analysts. It discusses possible reasons behind the turnaround, and implications for the future.

The technical situation is shown in the chart below. 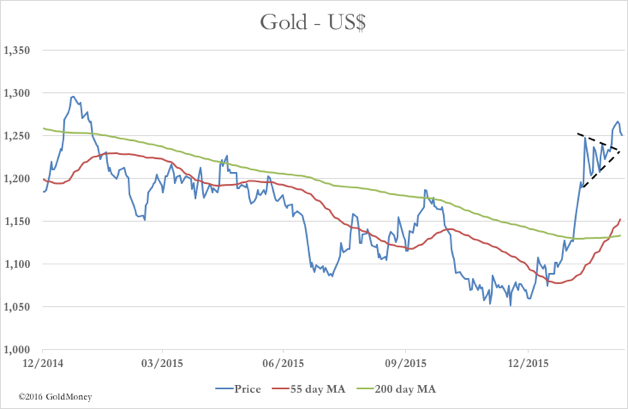 A "golden cross", with the 55 day moving average crossing above the 200 day moving average with both of them on a rising trend, and the share price above both these moving averages, has now occurred. This is generally taken by traders to indicate the bear trend has reversed, and a bull market is now in place.

More interestingly, this change of direction is combined with a bullish pennant pattern, which commenced on 11th February and completed on 3rd March, taking precisely three weeks. This is shown by the dotted lines. The intraday price movements (not shown) conform exactly to the pattern, and the break-out on 4th March saw high volume with an increase to a record amount of outstanding Comex contracts.

The other technical qualifications for a pennant are also fully satisfied. It follows a sharp rise, is a consolidation lasting no more than three or at most four weeks, volume diminished while the pattern played out (taking Comex volumes as proxy), and the break-out was a resumption of the trend. It therefore appears to be a text-book example.

Pennants give us a price objective, which equates to the preceding rise from its breakout point. This yields a minimum price target of approximately $1400, which with pennants can happen quite quickly. And that helps explain, from a purely technical point of view, the seemingly unstoppable strength in the gold price.

Technical analysis is the justification for investors to consider and take action in capital markets, without having to understand the underlying reasons why prices change. Indeed, in these days of seemingly infinite quantities of bank credit being applied to financial speculation, price trends are being driven day-to-day by charts, making prices dependent on the application of credit rather than fundamental appraisals of prospective values.

Technical analysis is notoriously fallible, encouraging action independent from rational thought. We are told that flows into gold ETFs have been positive for the last forty days. But if we ask the question, whether or not the buyers of physical gold represented by paper entitlements are doing so for financial protection, or alternatively are energised by the hope of rising prices, one must conclude that it is most probably the latter.

Put another way, technical analysis is justified on the basis that by encouraging the madness of crowds, it works, and there is plenty of loose money slopping around the markets to ensure it might. This really is not good enough. A reasoned understanding of what gold actually is, an appreciation of vested interests, and an analysis of the practical consequences of investment flows, is vital for us as individuals if we are not to be whipsawed in volatile markets.

The gold price started 2016 with all the big investment firms bullish of the dollar and bearish of commodities and gold. It is from such extremes in sentiment that sharp reversals take place: it's a case of everyone having sold all for dollars and there being no material sellers left to sell. If this is all that's involved this time, the previous trends for a rising dollar and therefore a falling gold price could well resume when these positions are sufficiently unwound.

To establish whether or not this is the case we must turn to fundamentals, which requires us to discard the conventional analytical approach. We must stop thinking gold is rising, when what is actually happening is that the dollar is falling. Nearly all economists and market traders have it back to front. Gold has no variable fundamentals, the condition that qualifies it uniquely as sound money. It is the currency it is measured in that has all the variable fundamentals, and that is where we must look.

When we look at the dollar price of gold, we naturally think that it is gold that is moving. But we are comparing two forms of money, gold that is not in general circulation, against the dollar that has supplanted it. And given that it is the dollar that is issued in any quantity desired by both the US Government and through fluctuations of bank credit, it is the dollar which ultimately depends on the market's assessment. The constant in this comparison for anything other than short-term trend-chasing is simply gold. Economists who argue otherwise are slaves to macroeconomic fashion rather than rational price theory.

The turnaround in the dollar's fortunes has been sudden, taking less than three months. The US dollar has been excessively overbought, predictably followed by a subsequent fall in its purchasing power against many key commodities. And there are good reasons for it to fall even further. They centre on the damage being inflicted on the dollar's position as the world's reserve currency. China and Russia are leading the charge to do away with the dollar, and China in particular is deliberately promoting the yuan as the dollar's substitute for international settlements with all her trading partners. The dollar's role in pricing commodities is becoming an anomaly, because China does more international trade than America by far.

That helps explain the long-term prospects for the dollar, which has yet to discount a reduction of the quantity of dollars in international circulation. Unless it is balanced by a contraction of credit on the American banks' balance sheets, a reduction in offshore dollars will inevitably result in the dollar's purchasing power tending to fall. But there is also renewed demand for commodities to add to the mix, coming from China.

China is about to embark on a colossal programme of infrastructure spending. Not only will this fill out many of the deficiencies in China's domestic infrastructure, but it is also earmarked for a vast course of industrialisation involving the whole of Asia. Cynics are sure to be correct in decrying the wasteful inefficiencies of state spending of this sort, but they are missing the point.

The point is that China has told us she values the dollar less than she does the commodities required to satisfy her thirteenth five-year plan, and the ones that will follow. This plan commenced with the Chinese new year, so she will already be looking to swap most of her stockpile of dollars for stockpiles of the required raw materials. Last year, China carefully laid down the groundwork for this action.

It was vital for China to control the risks to her own currency that would arise from the planned disposal of the majority of her dollar reserves. This was always her primary motivation for lobbying the IMF to include the yuan in the SDR, and also for her recently declared policy of managing it against a trade-weighted basket of currencies. So long as the yuan is measured against the dollar alone, it is an invitation for foreign speculators to attack it against their preferred unit of account. Attacking a currency where foreign exchange policy is more widely defined introduces great uncertainty into a speculative trade. The change in foreign exchange policy simply gives China the cover to sell her overvalued dollars for undervalued commodities.

China's actions are likely to lead to a major shift in macroeconomic expectations over the coming months. With the dollar's purchasing power continuing to fall relative to energy and industrial commodities, China's commodity suppliers will find the burden of their dollar-denominated debt relative to their output rapidly swinging in their favour. Gone, or at least deferred, will be the nightmare of commodity-related debts undermining the global financial system. There will, of course, still be bad debts, such as in the US shale-oil industry, and also problems for some resource-rich countries, such as Brazil, where the financial damage has already been considerable and may be ongoing. But for western investors, their current preference for safety in low, or even negative-yielding government debt, will be replaced by the opportunities offered in recovering emerging markets.

Standing back from the day-to-day introspection of western capital markets, it has been interesting to watch this financial train-wreck begin to materialise. Western central banks by debasing their currencies have produced little more than financial ammunition for speculation on a grand scale. We saw the effect of a flood of this accumulation into the dollar over the last eighteen months, and we are about to see the opposite effect as it ebbs away. And as speculative flows reverse, the dollar will increasingly be sold by stale bulls in preference for commodities. Much of China's dollar stockpile, along with increasingly redundant petrodollars from the Middle East, will also be sold, putting further downward pressure on the dollar's purchasing power.

A weakening dollar will become the next headache for the Fed, because the fall in its purchasing power will feed into a revival of price inflation without a pick-up in economic activity. Current market expectations of negative interest rates will inevitably switch to an anticipation of rising interest rate to contain the fall in the dollar's purchasing power. And as the dollar's fall in purchasing power against commodities progresses, the solvency of many domestic borrowers and even of the US government itself will become an additional risk to the dollar.

While we can now see reasons emerging for the US dollar's future loss of purchasing power, we can see the same conditions broadly affecting the other major currencies. Like the dollar, these currencies are all valued on the basis of their government promises, but it is not the purpose of this article to compare their merits. Gold alone does not suffer the disadvantage of having a government issuer, its above-ground stock increasing at an estimated rate that is similar to global population growth. Gold is not required to rise, as the term bull market suggests. Its purchasing power is likely to be considerably more stable than that of paper currencies over the long term. We do not have to make guesses over gold's future purchasing power.

Instead, the future price of gold depends on what happens to the purchasing power of the paper currencies in which it is measured. No case needs to be made for its usefulness or even its value, because it is the only sound money there is, no more and no less than that.

<p class="RichText"><em>The views and opinions expressed in the article are those of the author and do not necessarily reflect those of GoldMoney, unless expressly stated. Please note that neither GoldMoney nor any of its representatives provide financial, legal, tax, investment or other advice. Such advice should be sought form an independent regulated person or body who is suitably qualified to do so. Any information provided in this article is provided solely as general market commentary and does not constitute advice. GoldMoney will not accept liability for any loss or damage, which may arise directly or indirectly from your use of or reliance on such information.</em></p>
<p>&nbsp;</p>