In the two months since my last update on USD Fiat Money Quantity, it has increased by $292bn to $12.861 trillion and is still growing rapidly as shown in the chart below. 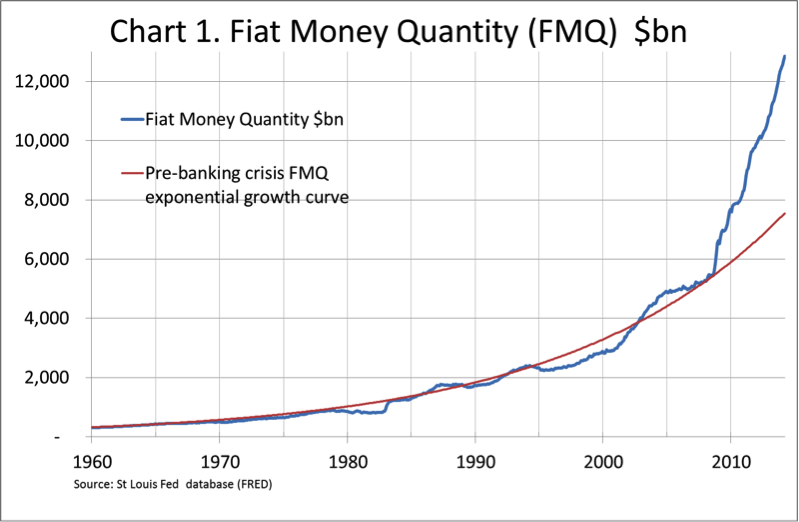 It is now 70.6% above where it would have been if it had grown at the long-term pre-banking crisis average monthly compound rate, represented by the red line in the chart.

The reduction in the monthly rate of QE does not appear to have slowed the growth rate of FMQ. Indeed, the objective is for QE to be supplemented and then replaced by growth in bank lending. The policy of gradually reducing the rate of QE can therefore be taken as an expression of confidence within the Fed that bank lending activity is beginning to pick up, reflecting not just asset financing but hoped-for economic activity.

Recent information throws some doubt on the latter expectation. Disappointing figures for January into early March were often blamed on adverse weather, but subsequently indications of economic activity have also often been disappointing. Furthermore, Europe and Japan appear to be moving towards overall deflation and deepening recession respectively, while the growth rate of China's economy is threatened by tightening credit conditions. These adverse developments may require a further acceleration in FMQ if a debt-deflation crisis is to be averted.

The second chart shows the gold price from the time of the Lehman crisis and also adjusted for both the expansion of FMQ and estimated above-ground stocks. 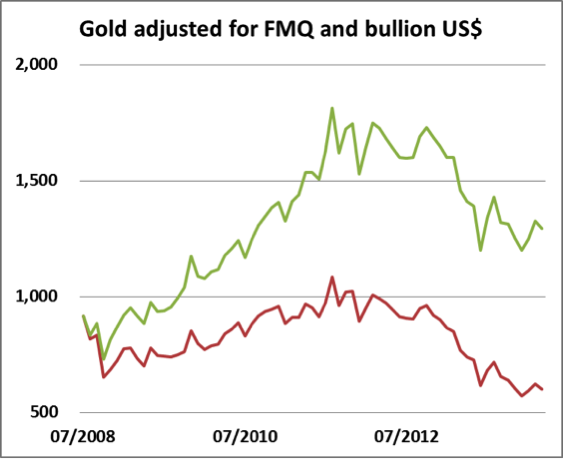 Since July 2008 the price of gold has risen in nominal terms from $918, to a high of over $1900 before falling to about $1280 currently. Adjusted for FMQ and above-ground bullion stocks the price in July-2008 dollars stands at $590, a net fall of over one-third. The price of gold has therefore fallen significantly in real terms, and is trading well below the mid-2013 price low.

The long-term adjustment from 1934 on the same terms is also interesting. The price of gold had just been raised from $20.67 to $35, and while convertibility between the USD and gold was prohibited for US citizens, it is reasonable to suppose that free convertibility would have worked at that price and time. In dollar terms the gold price could be said to have been fairly valued at that time.

The subsequent adjusted price in 1934-dollars is shown below. 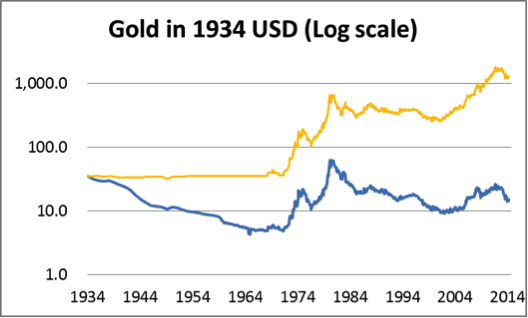 These comparisons are useful to give investors a sense of perspective. Too often analysts are oblivious to currency debasement when they forecast future prices. Instead, they assume that yesterday's market price is a sound valuation basis for analytical purposes. This assumption ignores currency debasement, government intervention, market emotion, and wrongly assumes markets are efficient.

To say that gold was correctly priced before the Lehman crisis cannot be proved, and is probably incorrect. However, adjusting the price subsequently by both FMQ and above-ground stocks gives a useful basis for price comparison. That the dollar price in 1934 represented fair value is however, a valid assumption.

The logical conclusion is that gold should be priced at $3,050 today (1280/42%) to match its valuation in 1934, before discounting the exceptional rate of future compound growth in FMQ and the real possibility of a collapse in USD purchasing power.