Since August 2014, bank reserves at the Fed have fallen by $646.6bn, while the sum of cash, checking accounts and deposits held by the public has risen by $1990bn. 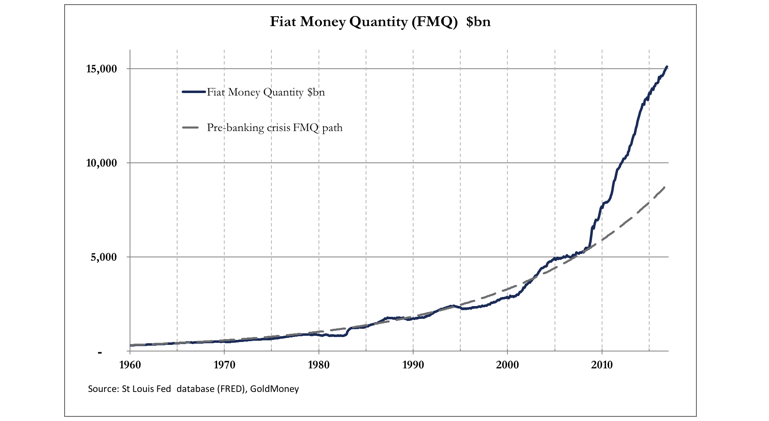 The fiat money quantityi has now breached the $15 trillion level, standing at $15,108bn on November 1st 2016, the last calculable date. This is now $6.3 trillion above the pre-Lehman crisis trend-line, exceeding it by 72%. Instead of the Lehman rescue being a temporary fix, the increase in the quantity of fiat money has continued to grow over eight years later.

After the Fed responded to the financial crisis, monetarist commentators warned that the accumulation of bank reserves at the Fed would one day be unleashed into an expansion of bank lending, because every dollar held in reserves could become more than ten dollars of bank credit. The accumulation of these reserves had had no precedent, and monetary policy was therefore in uncharted territory.

The only way bank reserves can be discouraged from leaving the Fed’s balance sheet is for the Fed to increase the Fed Funds Rate (FFR), which is the interest rate the Fed pays commercial banks on these reserves. The original concern is now becoming justified, because banks have been gradually withdrawing reserves held at the Fed over the last eighteen months. For this reason, the Fed had no alternative but to raise the FFR in December 2015 and in December 2016, to start the process of normalising rates. The Federal Open Markets Committee should be watching the withdrawal of reserves as a key indicator in formulating interest rate policy, not that it is openly admitted in the FOMC’s statements.

Since August 2014, bank reserves at the Fed have fallen by $646.6bn, while the sum of cash, checking accounts and deposits held by the public has risen by $1990bn. The sums recorded at the commercial banks are the counterparts of the expansion of bank credit, and show that for every dollar withdrawn from the Fed, roughly three dollars of circulating money has been created.

The next chart shows that the difference between M2 and M1 continues to accelerate above trend. This is a key indicator, because it reflects bank credit expansion, which in turn tells us that businesses are investing, and consumers are spending, confirming the expansion of deposits at the commercial banks. 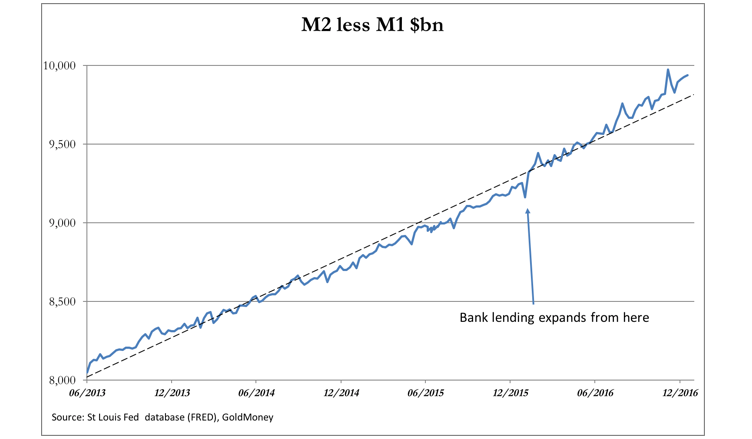 The commercial banks appear to have become more confident in their lending. Since January 2016, after a fifteen-month period of below-trend growth, this indicator has clearly shown not just a pick-up in bank lending, but reflects a continuing expansion of economic activity as well. Therefore, we can say the recession has been over for about a year.

The surge in optimism reflected in this chart tells us the next phase in the cycle will be for the economy to begin to hit capacity constraints. We don’t know how long this will take, but in practice businesses try to operate efficiently close to capacity, and with as little inventory in hand as practicable. Modern inventory control, such as just-in-time management, is part of this trend, and it might not take long before economists warn us about “overheating”. If President-elect Trump implements the economic policies he has advocated, capacity constraints will be brought forward anyway, and the Fed will have no option but to raise the FFR to a level which will moderate the expansion.

Of course, management of economic activity has always been the Fed’s underlying goal in controlling interest rates, and without exception it has never been successfully achieved. It cannot be achieved, so long as the cycle of credit expansion and contraction is endemic to the banking system.

As our next chart shows, the trend level for interest rates at which the next financial crisis is likely to be triggered has been declining since the peak in late-1989, marked by the dashed line. The reason these peaks have declined is obviously due to the accumulating burden of private-sector debt. 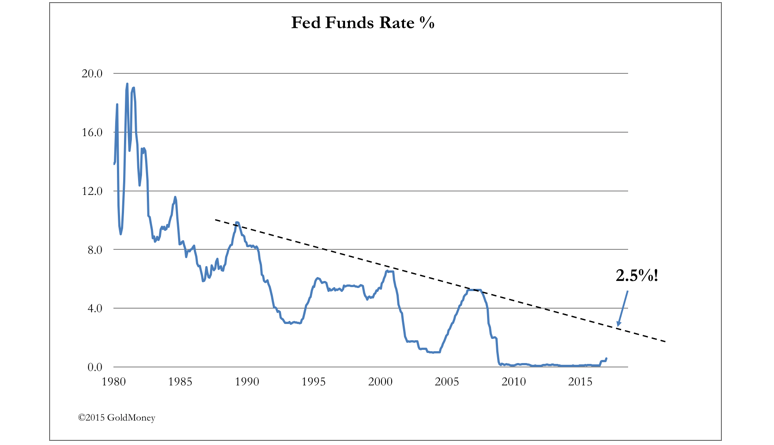 In a normal bank credit cycle, debt is created when bankers become confident in their lending, and destroyed after they have become over-confident in their competition for lending business, when they sacrifice risk considerations for competitive advantage. The alternating emotions of fear and greed in the management of banks drives the cycle of boom and bust.

Ever since the 1930s depression, economists have argued for the business cycle to be smoothed by preventing the periodic slumps in activity, with the consequence that malinvestments are never properly unwound. The root of the problem is the licence given to the banks to issue credit out of thin air, and the result has been to store up economic distortions to be resolved only by major crises. Thus, it was the post-war period that ended with the inflation of the 1970s, and now the post-seventies period of declining price inflation is likely to be ending as well.

Freed from the restrictions of the presidential election cycle, the Fed will almost certainly be considering its options. From the last chart above, it is clear from the trend of declining interest rate peaks that a rise in the FFR to as little as two to two and a half per cent risks setting off a new financial crisis, which due to the accumulation of debt over time threatens to be of a larger degree than the great financial crisis eight years ago.

President-elect Trump gained his nomination on a wave of public discontent over the establishment, with the promise of better outcomes. Trump appears to blame America’s problems on a mixture of unfair competition from China and Mexico, and US corporations that refuse to invest in domestic production. Ordinary people find it hard to get jobs as anything other than temporary waiters and bartenders. It is a popular message, which overlooks the root cause, which is the transfer of wealth and earning-power from the poorest in society to the banks and their borrowing customers. This wealth transfer is the consequence of monetary inflation, which, as we can see from the FMQ chart, has been compounding at well above the long-term average rate for the last eight years.

Trump has said he would invest in America’s decaying infrastructure, and he intends to cut taxes as well as make savings in government spending. The problem with cutting government spending is the cost of welfare is rising too rapidly for any cuts in spending to have meaningful effect, or to be long-lasting. Furthermore, we can see from our analysis of the state of the credit cycle that Trump’s fiscal and infrastructure stimulation plan is going to conflict with the credit cycle at the worst possible time, because it is already in its expansionary phase. Therefore, the effect on prices will be to drive them both higher and faster than they would otherwise go, fuelled by capacity constraints.

We have yet to see whether Trump proceeds with his economic proposals, but early indications are not encouraging in the context of monetary policy. Over trade, Trump and his team have displayed a high degree of economic illiteracy, which if anything is worse than that of the discredited outgoing establishment. Trump & Co. appear to be moving closer to Smoot-Hawley, making Obama look positively libertarian with regard to trade. Imposing trade restrictions will simply make the outlook for rising prices even worse. Trump, as a businessman, should at least understand the benefits of free trade, but he’s not acting as if he does.

Our last chart shows the end of year gold price on two measures, adjusted for the fiat money quantity. 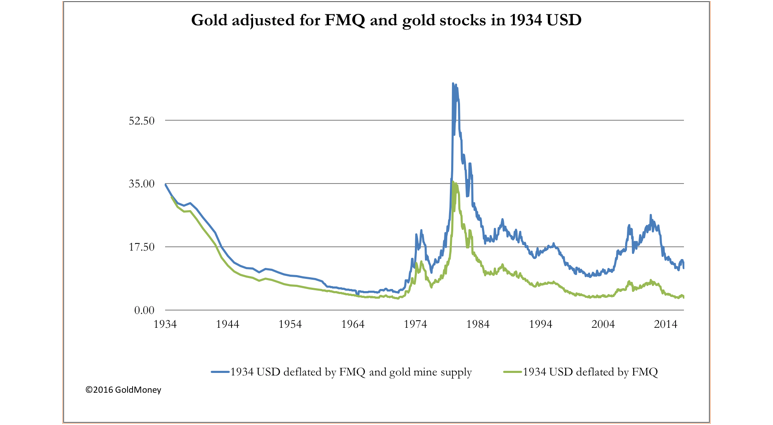 It seems only fair that when adjusting the gold price by the FMQ, it should also be adjusted by the increase in above-ground gold stocks. This is represented by the blue line. Since 1934, total gold mined has increased from an estimated 49,100 tonnes to 168,520 tonnes todayii. However, this does not account for the increase in the human population, from just over two billion to about seven and a half billion today. Both above-ground gold stocks and the world’s population have increased roughly three and a half times, so as universal money the quantity of gold on a per-capita basis has not increased at all.

For this reason, it makes more sense not to deflate the price of gold by above-ground stocks, so the red line in the chart, which is the 1934 gold price deflated by FMQ only, properly reflects current gold values in 1934 dollars. Based on today’s gold price of $1150, adjusted for FMQ since 1934 it stands at $3.36, less than one tenth of the $35 fixed at that time.

The all-time low was $3.13 in April 1971, so adjusted for FMQ the gold price is only 7% above its all-time low. There is, of course, no guarantee the gold price won’t go any lower in the coming months, particularly given the deteriorating interest rate outlook. However, the average of the FMQ-adjusted price since 1934 is nearly eight times the current level, so gold must be regarded as significantly undervalued relative to fiat dollars.

i The fiat money quantity is basically the sum of true money as defined by the Austrian School, plus bank reserves held at the Fed., plus reverse repos initiated by the Fed. It differs from other measures of money quantity by including fiat currency not in circulation, but available.
iiSee James Turk and Juan Castañeda’s paper on above-ground gold stocks https://wealth.goldmoney.com/images/media/Files/Old_GM_WP/theabovegroundgoldstock.pdf