Fear Index May 2013 The value of gold as money

US M3 rose above $15.1 trillion in April, however monetary growth seems to have slowed down significantly over the past 3 months, despite the Federal Reserve’s continuing to inject over $85 billion a month as part of its liquidity programs, which by now can deservedly be called QE-forever. 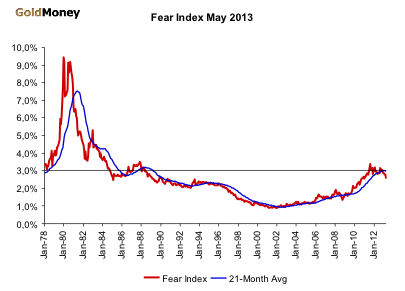 However the purpose of the GoldMoney Fear Index is not to gauge the current state of the gold bull market, or to analyse short term market action, or even to visualise the trend in relative terms. There are plenty of other indicators which traders might find useful for that. The reason that James Turk created the formula for the GoldMoney Fear Index, based on the official Bretton Woods equation, was to be able to determine the value of gold, and hence know when gold was over- or undervalued at the current price.

Remember that before August 1971 gold was officially money in the US and therefore, through the Bretton Woods system set up in 1944, it was also official money for two-thirds of the world as you can see in this History of exchange-rate regimes. Even chartalists, who argue that this “official” or legal quality is the most important determinant of something being money, will admit the fact that gold was money then. Up until the year 2000, the Swiss franc was still 40% backed by gold.

In other words, gold was undeniably money in most of the world just a generation ago and remained money in parts of the world until just over a decade ago. But is gold money now?

Most of the monetary experts would say no. Most financial analysts currently lump gold with commodities, even some who are considerable gold bugs and look positively on the gold standard, would argue that at the moment gold is not money.

First of all let me dispel the much-abused argument that you cannot just walk into a shop and pay for your groceries with gold. We could argue that neither can you pay with euros in a shop in Indiana or with dollars in a Portuguese bar, and yet both euros and dollars are widely considered money. Even more poignantly, you will be hard pressed to pay at an Italian café with a € 500 note and Spanish taxi drivers still reserve the right to reject € 50 notes, in fact it is easier to get them to accept € 12 silver coins (yes, euro-system central banks still mint silver coins) than high-denomination paper money notes.

Secondly let us remember that gold has never really been street money or small-transaction money. As the saying goes “gold is the money of kings, silver is the money of gentlemen, copper is the money of peasants and debt is the money of slaves”. Gold’s high value-weight ratio means that it has always found its place in large value transactions: international trade, real estate markets, inter-bank and inter-central bank settlements, etc.

So for those of us who are not chartalists, and actually care about what happens in the market and the real world, all we need to know to answer the question of whether gold is or isn’t money is if it is being used as money. Is gold currently being used as a store of value, unit of account and medium of exchange?

Clearly it is performing the first function, store of value: That is what central bank gold reserves are. That is what Indian high-carat gold dowries are. That is what good delivery bars stored in gold vaults throughout the world are. Commodities are not stockpiled in such quantities, there is no commodity that has a stock-to-flow ratio of 65-1 because commodities are produced and consumed, with perhaps a small inventory left over for speculation and flexibility. China is not importing over 1.000 tonnes of gold a year to consume it, but rather to hold it. To what end? As a store of value! 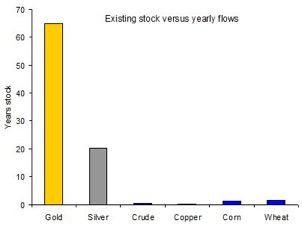 Is gold currently being used as a medium of exchange? Yes. Certainly not as much as it was a generation ago, but real estate brokers in Vietnam still transact in gold, despite the governments attempts to crack down on the practice. Iran, Turkey and China have recently carried out large international trade deals where oil was paid for in gold. In 2013 it seems that Russia has also joined the oil-for-gold club. 13 US States including Utah, Colorado and Minnesota have passed or are in the process of passing laws to make gold legal tender. Voluntary associations like the AOCS include thousands of retailers accepting gold and silver as payment.

It is in the unit of account front where gold is definitely behind, although there is a growing demand for the use of gold as numeraire, especially as the currency wars make fiat money an increasingly unreliable unit of measurement and the need for an objective, independent measuring rod grows.

Valuing gold as a commodity (in the narrow, financial sense of the word) is a mistake. Gold supply is relatively static, growing at less than 1.5% annually and therefore it is demand for holding gold that is the decisive factor in the gold market. Gold “consumption” is also numerically irrelevant. What other type of asset is characterised and valued by the relative desire to hold cash balances (or “reserves”) in its denomination? That’s right: currencies. That is the correct asset class for gold (and silver) and the reason that the ISO 4217 list of currency symbols includes XAU (gold ounces) and XAG (silver ounces). There is no ISO 4217 symbol for oil, copper or wheat.

This discussion might seem very academic and impractical to many, however there are very practical reasons to have this debate, because the consequences of classifying gold and silver one way or another are very significant when trying to value it. Just as attempting to value a stock using debt-valuation criteria would lead you to some absurd conclusions, or trying to value real estate as a commodity could land you in some sticky investment territory… attempting to value gold using the same criteria and models that are used for oil or natural gas will lead you to the wrong conclusions. That is why most analysts tasked with valuing gold and predicting its price have been consistently wrong over the last 10 years. Investment houses were assigning that task to the same people that were forecasting the price of copper and iron.

The Fear Index starts off with the right assumption: gold is money. It goes on to value it as currencies should be valued: relative to other currencies. The natural alternative to holding cash balances in one currency is holding them in a competing currency, the mechanism that describes the flight from an overvalued currency to an undervalued one is Gresham’s Law (very often misrepresented and misunderstood). In the case of the Fear Index we are comparing gold to the US Dollar, particularly relevant since not so long ago they were linked. The Euro Fear Index does likewise with its homonymous currency.

Now we are on the right track and asking the right questions: which is better money? What share of the market will each type of money capture? How are interest rates and monetary policy affecting the demand to hold one or another type of money?

And of course for anybody worried that the current fiat money system is unsustainable and is bound to collapse in runaway inflation or in the mother of all debt defaults, the key question is: how much gold will be necessary to restore confidence in the currency after the collapse? What price of gold would 40% or 100% gold backing for the dollar imply?

In answering this question, the Fear Index proves invaluable.