The US fiscal cliff debate is over, and if you’ll excuse me for resorting to a well-worn gold bug cliché, the can has just been given another kick down the road.

The problem is of course that the can is getting ever bigger and heavier, meaning Uncle Sam will soon find that he is incapable of belting it down the road in time honoured fashion.

US M3 grew by $40 billion to $14.8 trillion in November, on track to end the year very close to the $15 trillion round-figure that we expected when Operation Twist began. It is worth noting that M3 grew in November despite a decline in M1, signalling perhaps that money velocity is starting to pick up. The gold price ended that month at $1,725 per troy ounce, on its way to its twelfth consecutive annual increase in US dollar terms. The Fear Index is stable at 3.04%, with the 21-month moving average inching its way up to 2.98%. 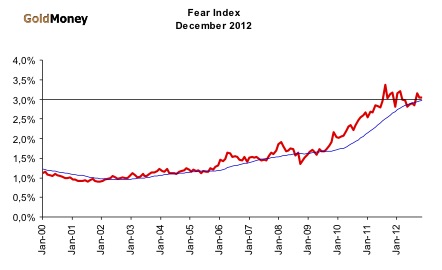 The US Federal Reserve and other central banks the world over are acting in the mistaken belief that there is a free lunch, that printing money does create wealth. Of course the most reasonable among the central planners attempt to justify and rationalise this nonsense by claiming exceptional circumstances, some variation on “the paradox of thrift”, employing “idle resources” to claim that money printing will not be inflationary or distort the economy. Not content with indirect money printing via debt monetisation, some are now mulling direct money printing and the ridiculous “trillion dollar platinum coin” option.

Unfortunately central planners and their advocates are as wrong about this as they are about the effects of manipulating interest rates. Leaving aside the fact that printing money is inflation (the attempt to change the meaning of the word inflation deserves its own chapter in the history of Newspeak), let us examine their argument that incurring debt and expanding the money supply is a free lunch under current circumstances.

The US government will soon owe $16.5 trillion to its creditors. Will this staggering sum have to be repaid? Can it ever be repaid? If the answer is yes, then each additional dollar of debt is a burden on US taxpayers and a whole generation is practically destined to indentured servitude. After all, debtors might no longer be imprisoned in the 21st century, but tax debtors certainly are. If the answer is no, then the creditors are the ones footing the bill. Both ways, and in any conceivable combination of the two (for example if the debt is repaid in inflated dollars), someone will pay for this gargantuan spending binge. No free lunch.

But let’s not stick just to the debt; we must also look at the monetary side of the equation. The US money supply (M3) now stands at almost $15 trillion. Do these dollars represent purchasing power? Do they have the potential to be used to acquire goods and services? Once more if the answer is yes, an increasing amount of dollars chasing a stock of goods and services that is growing at a slower pace will inevitably bid up their price. If the answer is no, those dollars are not intended for spending and do not represent purchasing power but are rather just mathematical abstractions for use in the financial markets… then they will no longer be money, will no longer be as desired (remember that money is the good with the slowest decreasing marginal utility because it can exchanged for other goods) and will rapidly lose value as soon as people become aware of this fact.

The timing is uncertain, but the outcome is not. As James Rickards points out in this recent interview, euro-strength relative to the dollar despite massive troubles in the eurozone serves to highlight that trust in the dollar is waning.

Anybody in the world who holds significant amounts of dollars should be aware of these facts and, if they have any sense, start considering alternatives. Thankfully, a large part of the world still remembers that gold was and still is money. They should benefit from some form of safety net when our currently dominant fiat currencies follow the path of their historical predecessors.