Thanks to the Fed's tapering, a wider public is becoming aware of currency instability in diverse economies, from Turkey to Argentina, and India to Indonesia. Indeed, on Tuesday night Turkey raised overnight interest rates by a whopping 4.5% to 12% in an attempt to stop a run on the lira.

Turkey has her own political problems, perhaps strong enough to knock the stuffing out of her currency on their own, and Argentina seems to be permanently fighting off hyperinflation. But it is a mistake to think that the idiosyncrasies of each currency are solely the cause of their downfall. The fact that these countries' currency problems are all happening at the same time tells us the common factor is currency itself.

Over the last decade it has been fashionable to invest increasing quantities of money in these economies. Financial flows have also been instrumental in accelerating the growth of local domestic credit. Money flows are now in the process of reverting back to base and the chart below of the Indian rupee is a good example in which this effect on a currency can be observed. 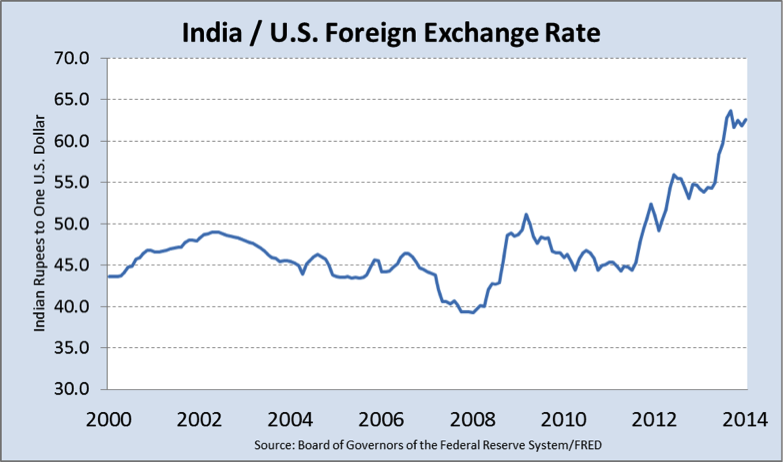 Between 2002 and 2008 the rupee rose against the dollar (i.e. fewer to the dollar) reflecting inward investment, and after the Lehman Crisis it started to fall as the money-tide reversed. Since then the rupee has lost almost 40% of its value. It is also clear from this chart that the primary trend for the rupee has been firmly down for some time.

The same is true of most other emerging market currencies: before the Lehman Crisis investment flows into them fuelled both economic growth and the expansion of bank credit. Since Lehman, these flows have reversed mostly offset by yet more expansion of domestic credit.

Over much of the last century US dollar cash and deposits expanded on the back of a gold standard; in the same way today's emerging markets have expanded on the back of a dollar standard. Therefore, the redemption of these currencies into the US dollar mirrors pre-WW1 bank runs, except on a global scale. And In every bank run a bank pretends there is no problem until it is too late.

Central banks cannot escape the fact that currencies depend entirely on confidence. Markets are now painfully reminding us of this truism, following the Fed's second tapering announcement. A whisper in New York becomes a storm in Delhi, Ankara, Sao Paulo, Buenos Aires and Pretoria.

It is an important point. In the same way that under a gold standard a central bank had to have sufficient gold stocks to maintain confidence in its currency, an emerging market central bank has to have sufficient dollar reserves on hand. And this is why from a monetary perspective a desperate central bank is compelled to increase interest rates when Keynesian text books tell us such a move is certain to drive these economies into a deflationary slump.

The screw is now tightening. Having added unprecedented amounts of liquidity into its own economy through quantitative easing, the Fed is now reducing the pace of its expansion of narrow money. Unfortunately this is bad news for emerging market countries, who will surely conclude that international monetary co-operation has broken down.