Earlier this week Bill Gross who runs Pimco's bond fund made a conditional case for investing in high-yielding bonds, even though on first cut the yield benefit appears insufficient to justify the extra risk. Put bluntly, he suggests that investing in bonds issued by insolvent Eurozone governments or second-rank corporate borrowers could be profitable.

Mr Gross is following some other smart and usually sceptical fund managers in appearing to throw in the towel against persistently low bond yields and equity markets that defy gravity. He is unlikely to take this stance without good reasons.

One reason could be value judgements hardly matter in this market. Investors have always bought into mutual funds on the basis that a fund manager will run their money better than they can themselves. By passing their bucks as it were to a professional, investors seem to think they are eliminating investment risk. However, they often confuse the risk that comes from a lack of their own investment skills with the price risk in the markets.

This is why mutual funds are in a tricky position when fundamentals do not support an investment case and the money keeps flowing in. And it is not just bond funds: the chart below shows the S&P 500 index, which since the dot-com bubble burst has entertained us with some pretty wild swings. 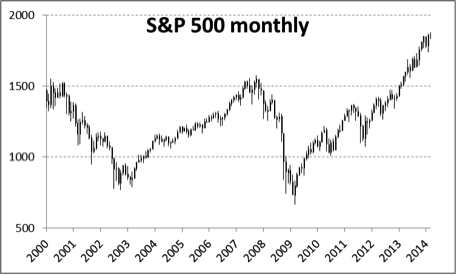 It should be obvious to the man in the street that things are not as good as a near tripling of the S&P since the Lehman Crisis would suggest. Yet his savings still go into stocks and bonds, irrespective of price. And as Mr Gross writes in his newsletter, it all depends on confidence in policymakers and the effectiveness of their policies.

This is a second reason. The fact that fund managers depend on policymakers to not to drop the ball is the same as saying free markets are a myth. Capital markets are no longer where buyers and sellers meet to buy and sell things based on perceptions of value; instead it is all about trends and trusting the Fed.

Asset classes from bonds to fine art are rising, underwritten by zero interest rates. The underlying bubble is the biggest and deliberately synchronised bubble in history, of currency itself. The rate at which it inflates does not appear to be slowing, despite the Fed's tapering. Otherwise markets would be stalling. Instead the Fed's tapering programme must be being offset by something like a pick-up in bank lending. If so, then all classes of investment assets can continue to rise in price and the party goes on. Indeed, if the Fed continues to taper, we can take it as a reasonable indication that growth in bank lending is fully compensating.

There is of course a significant danger that a bank credit revival will lead to price inflation before long, but that has always been tomorrow's problem. There are also huge risks involved with surfing on a credit wave, not least knowing when to get off. For these reasons, the very experienced and well-informed Mr Gross is wise to heavily qualify his new-found optimism.