Zerohedge recently drew attention to the growing level of foreign bank cash deposits, tucked away at the bottom of the Fed's H.8 statement.

Foreign banks' cash balances have increased by $518.7bn since September 2012, accounting for almost all of the increase in these banks' total assets in the H.8 table. The implication is that these cash balances are held as reserves on the Fed's balance sheet, the counterpart of quantitative easing.

This naturally raises the reasonable question posed by Zerohedge's article as to why the Fed appears to be benefiting foreign banks with QE. The answer is either these deposits have been transferred to them from US banks in the normal course of business or the Fed is prepared to provide liquidity to foreign banks: after all the US dollar is the reserve currency. And this liquidity is most needed by the weakest banks in the international banking system, many of which are in the eurozone.

The ECB's room for manoeuvre with respect to money-printing is more limited, and it is the only central bank of the big four not to have overtly quantitatively eased. Furthermore, the eurozone is still in trouble even though it has disappeared from the headlines. The chart below of bank lending figures supplied by the ECB illustrates the problem. 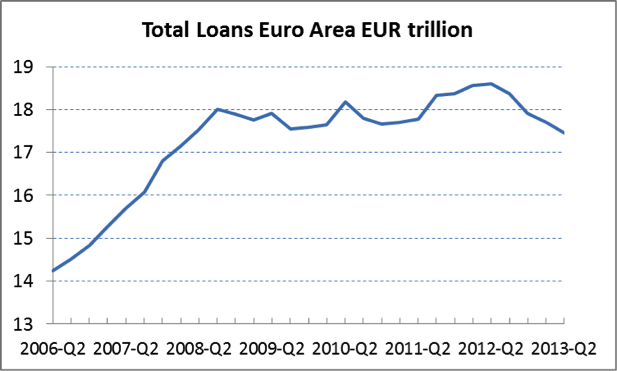 Bank lending peaked in mid-2012, and by mid-2013 it had contracted over €1 trillion. By now, the ECB should have advance knowledge of the yet-to-be-released Q3 bank lending total, which if it has continued the downward trend explains why the ECB unexpectedly reduced interest rates recently.

Meanwhile, the Bank of England has finally admitted that the UK's economy is growing. Conventional wisdom suggests the BoE should permit interest rates to return to more normal levels, but it refuses to do so for at least another year. The fact that the UK continues with current interest rate polices is due in part to policy coordination with the Fed, the ECB and to a lesser extent perhaps the Bank of Japan.

The logical implication from the Fed's and the BoE's actions is that interest rate policies are being managed with the weakest in mind. Therefore the course of prices and bank lending in the eurozone could be regarded as the current determinant of when tapering will be introduced by the Fed.

However there is still an overriding problem: if the stimulant of monetary inflation is reduced, rates along the yield curve will rise rapidly from today's wholly artificially suppressed levels. The two cannot be divorced. The Fed knows this, and it is central to its internal debate.

The fact of the matter is that just as zero interest rates flatter bank balance sheets and government borrowing costs, the reverse is also true. Add into the mix the deflationary implications of more normal interest rates and it is obvious that the Fed and the BoE are trapped. They will not be looking forward to the day when they run out of excuses for this dilemma. But for now at least there is a rescue mission in place for the eurozone, and the Fed will continue to lend its support to foreign banks.