The China Gold Association this week released estimates for China's "gold consumption" for 2013 at 1,176 tonnes. Furthermore the CGA reported China's own gold production at 428 tonnes.

The CGA's figures were significantly less than recorded imports into China from Hong Kong. Instead, on my analysis, the CGA figures do not represent total demand, but presumably only that portion reported to it by its members at the retail level. The purpose of this article is to set the record straight.

There are very few figures coming out of China that you can rely upon, and this is particularly true of gold imports. Instead, you have to take what is available and apply a judicious mix of logic and deduction. Mainland China does not publish imports and exports. The only figures for gold supplied to the Chinese public are of gold delivered through the Shanghai Gold Exchange and out of their registered vaults, which for 2013 totalled 2,197 tonnes. Most of this I have reason to believe is imported, only some of which is through Hong Kong. And to think that gold is only imported through Hong Kong is a mistake.

The table below shows my calculations for total Chinese and Hong Kong demand. 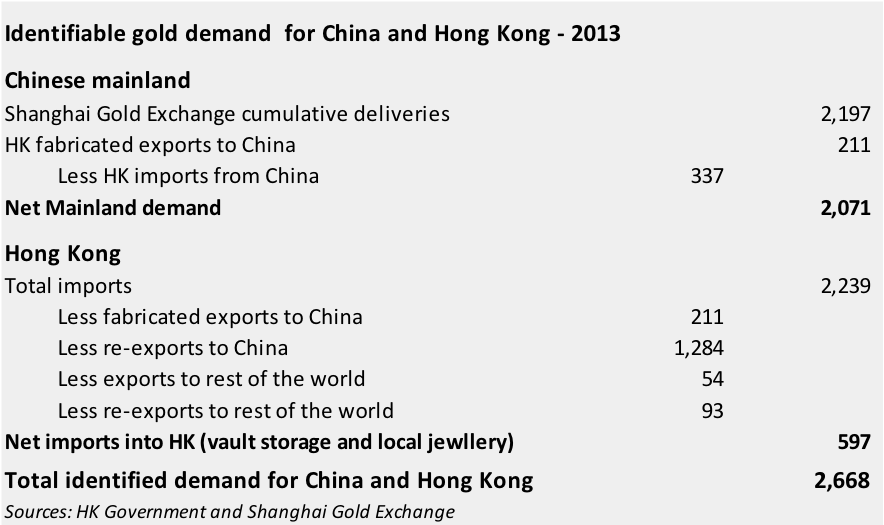 All gold that changes hands in China is meant to go through the SGE. However, mine output is thought to be bought up by the government, most probably directly from the mines bypassing the SGE. All circumstantial evidence including government policy towards physical gold tells us this is true. And it is naïve to think a communist government – any government for that matter – would route gold from mines it controls through the market, whatever the market "rules" are.

Bars withdrawn from SGE-registered vaults and subsequently sold back into the market are recast into new bars and are classed as scrap. At current prices, this supply is likely to have diminished from over four hundred tonnes annually to perhaps two or three hundred tonnes in 2013.

So of the 2,197 tonne total, assuming all mine supply bypasses the market into government hands and scrap is a few hundred tonnes, we can conclude that roughly 2,000 tonnes is imported into China's Mainland, only some of which comes from Hong Kong.

Hong Kong's exports of 211 tonnes to China are fabricated gold not destined for the SGE (see the table above). In addition there are 1,284 tonnes of re-exports, which we can assume are bars for onward delivery to the SGE so are included in the SGE delivery total. Hong Kong also imports gold from China (337 tonnes), most of which is sold as jewellery to Chinese visitors from the mainland avoiding Chinese sales taxes. Hong Kong also acts as a regional hub, exporting and re-exporting gold to Taiwan, Thailand, India etc., which in 2013 amounted to 54 and 93 tonnes respectively.

Total demand in China and Hong Kong adjusted for these factors is therefore the bottom-line figure of 2,668 tonnes. This does not include gold imported directly through Mainland China and gold not sold through the SGE. Furthermore, ultra-rich Chinese can buy gold outside China and there is no way this additional demand can be estimated. Nor can we estimate any gold bought in London and elsewhere by the Chinese government.

Lastly, these figures do not include the net 48.5 tonnes of gold coin imported into China via Hong Kong, which if included takes known gold demand up to 2,716.5 tonnes. This is easily more than double the Chinese Gold Association figure for "gold consumption".

While we cannot pin down gold imports precisely, the monopoly market for physical gold in China allows us to accurately define public demand on the mainland. Together with Hong Kong trade figures we get a far more accurate picture than that given by any other means. It should be noted that even this approach misses the activities of the government itself and of the very rich able to bypass the system.

It is a pity this is not more widely appreciated by analysts in Western capital markets.