China first delegated the management of gold policy to the People's Bank by regulations in 1983.

This development was central to China's emergence as a free-market economy following the post-Mao reforms in 1979/82. At that time the west was doing its best to suppress gold to enhance confidence in paper currencies, releasing large quantities of bullion for others to buy. This is why the timing is important: it was an opportunity for China, a one-billion population country in the throes of rapid economic modernisation, to diversify growing trade surpluses from the dollar.

To my knowledge this subject has not been properly addressed by any private-sector analysts, which might explain why it is commonly thought that China's gold policy is a more recent development, and why even industry specialists show so little understanding of the true position. But in the thirty-one years since China's gold regulations were enacted, global mine production has increased above-ground stocks from an estimated 92,000 tonnes to 163,000 tonnes today, or 71,000 tonnes* ; and while the west was also reducing its stocks in a prolonged bear market all that gold was hoarded somewhere.

The period I shall focus on is between 1983 and 2002, when gold ownership in China was finally liberated and the Shanghai Gold Exchange was formed. The fact that the Chinese authorities permitted private ownership of gold suggests that they had by then acquired sufficient gold for monetary and strategic purposes, and were content to add to them from domestic mine production and Chinese scrap thereafter rather than through market purchases. This raises the question as to how much gold China might have secretly accumulated by the end of 2002 for this to be the case.

China's 1983 gold regulations coincided with the start of a western bear market in gold, when Swiss private bankers managing the largest western depositories reduced their clients' holdings over the following fifteen years ultimately to very low levels. In the mid-eighties the London bullion market developed to enable future mine and scrap supplies to be secured and sold for immediate delivery. The bullion delivered was leased or swapped from central banks to be replaced at later dates. A respected American analyst, Frank Veneroso, in a 2002 speech in Lima estimated total central bank leases and swaps to be between 10,000 and 16,000 tonnes at that time. This amount has to be subtracted from official reserves and added to the enormous increase in mine supply, along with western portfolio liquidation. No one actually knows how much gold was supplied through the markets, but this must not stop us making reasonable estimates.

Between 1983 and 2002, mine production, scrap supplies, portfolio sales and central bank leasing absorbed by new Asian and Middle Eastern buyers probably exceeded 75,000 tonnes. It is easy to be blasé about such large amounts, but at today's prices this is the equivalent of $3 trillion. The Arabs had surplus dollars and Asia was rapidly industrialising. Both camps were not much influenced by western central bank propaganda aimed at side-lining gold in the new era of floating exchange rates, though Arab enthusiasm will have been diminished somewhat by the severe bear market as the 1980s progressed. The table below summarises the likely distribution of this gold. 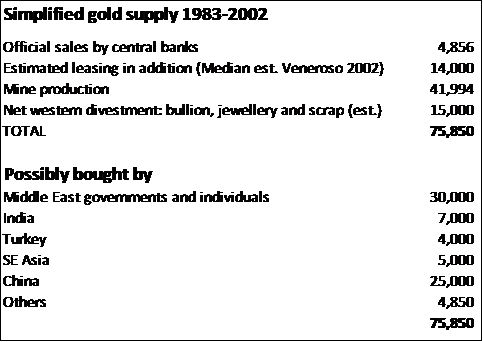 Today, many believe that India is the largest private sector market, but in the 12 years following the repeal of the Gold Control Act in 1990, an estimated 5,426 tonnes only were imported (Source: Indian Gold Book 2002), and between 1983 and 1990 perhaps a further 1,500 tonnes were smuggled into India, giving total Indian purchases of about 7,000 tonnes between 1983 and 2002. That leaves the rest of Asia including the Middle East, China, Turkey and South-East Asia. Of the latter two, Turkey probably took in about 4,000 tonnes, and we can pencil in 5,000 tonnes for South-East Asia, bearing in mind the tiger economies' boom-and-bust in the 1990s. This leaves approximately 55,000 tonnes split between the Middle East and China, assuming 4,850 tonnes satisfied other unclassified demand.

The Middle East began to accumulate gold in the mid-1970s, storing much of it in the vaults of the Swiss private banks. Income from oil continued to rise, so despite the severe bear market in gold from 1980 onwards, Middle-Eastern investors continued to buy. In the 1990s, a new generation of Swiss portfolio managers less committed to gold was advising clients, including those in the Middle East, to sell. At the same time, discouraged by gold's bear market, a western-educated generation of Arabs started to diversify into equities, infrastructure spending and other investment media. Gold stocks owned by Arab investors remain a well-kept secret to this day, but probably still represents the largest quantity of vaulted gold, given the scale of petro-dollar surpluses in the 1980s. However, because of the change in the Arabs' financial culture, from the 1990s onwards the pace of their acquisition waned.

By elimination this leaves China as the only other significant buyer during that era. Given that Arab enthusiasm for gold diminished for over half the 1983-2002 period, the Chinese government being price-insensitive to a western-generated bear market could have easily accumulated in excess of 20,000 tonnes by the end of 2002.

We now know that China had the resources from its trade surpluses as well as the opportunity to buy bullion. Heap-leaching techniques boosted mine output and western investors sold down their bullion, so there was ample supply available; but what was China's motive?

Initially China probably sought to diversify from US dollars, which was the only trade currency it received in the days before the euro. Furthermore, it would have seemed nonsensical to export goods in return for someone else's paper specifically inflated to pay them, which is how it must have appeared to China at the time. It became obvious from European and American attitudes to China's emergence as an economic power that these export markets could not be wholly relied upon in the long term. So following Russia's recovery from its 1998 financial crisis, China set about developing an Asian trading bloc in partnership with Russia as an eventual replacement for western export markets, and in 2001 the Shanghai Cooperation Organisation was born. In the following year, her gold policy also changed radically, when Chinese citizens were allowed for the first time to buy gold and the Shanghai Gold Exchange was set up to satisfy anticipated demand.

The fact that China permitted its citizens to buy physical gold suggests that it had already acquired a satisfactory holding. Since 2002, it will have continued to add to gold through mine and scrap supplies, which is confirmed by the apparent absence of Chinese-refined 1 kilo bars in the global vaulting system. Furthermore China takes in gold doré from Asian and African mines, which it also refines and probably adds to government stockpiles.

Since 2002, the Chinese state has almost certainly acquired by these means a further 5,000 tonnes or more. Allowing the public to buy gold, as well as satisfying the public's desire for owning it, also reduces the need for currency intervention to stop the renminbi rising. Therefore the Chinese state has probably accumulated between 20,000 and 30,000 tonnes since 1983, and has no need to acquire any more through market purchases given her own refineries are supplying over 500 tonnes per annum.

All other members of the Shanghai Cooperation Organisation** are gold-friendly or have increased their gold reserves. So the west having ditched gold for its own paper will now find that gold has a new role as Asia's ultimate money for over 3 billion people, or over 4 billion if you include the South-East Asian and Pacific Rim countries for which the SCO will be the dominant trading partner.

*See GoldMoney’s estimates of the aboveground gold stock by James Turk and Juan Castaneda.
**Tajikistan, Kazakhstan, Kyrgyzstan, Uzbekistan, India, Iran, Pakistan, and Mongolia. Turkey and Afghanistan are to join in due course.