Though the Fed would deny it, it is clear from the minutes of the last Federal Open Market Committee (FOMC) meeting that a rise in interest rates has been put off indefinitely.

The subsequent rally in the price of gold and the sudden fall in the dollar tend to confirm this conclusion.

The Fed Funds Rate, which is the interest rate the Fed targets to set all other rates, has now been less than 0.25% for six and a quarter years, gradually declining from roughly 0.15% to about 0.10% today. It was set at a target range of between zero and 0.25% in December 2008. 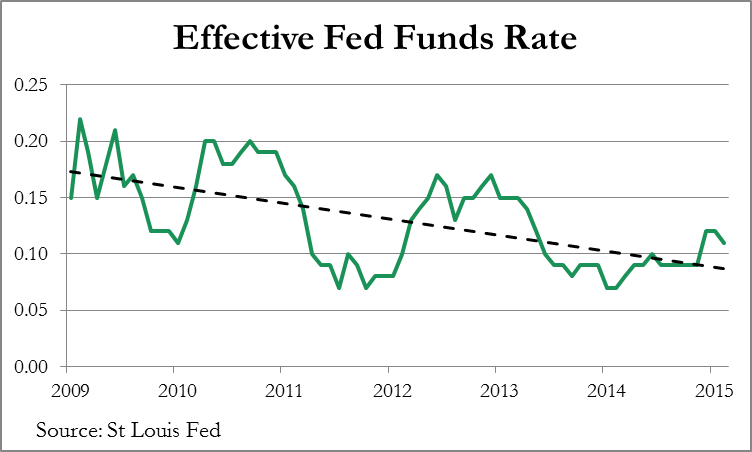 According to the Policy Normalisation Principles and Plans issued last September, the FOMC will raise its target range for the Fed Funds Rate "primarily by adjusting the interest rate it pays on excess reserve balances" when the Fed normalises interest rates, "using reverse repurchase agreements to take money out of circulation to the degree necessary". The Fed also intends to reduce its holdings of securities and contract its balance sheet in the longer run.

If normalisation is the result of economic recovery we will be familiar with the playbook. Demand for money in the economy picks up, and instead of pyramiding bank credit on reserves held at the Fed, the Fed feeds back the excess reserves to the banks by selling government securities into the markets. The bear market in government bonds should be manageable because of underlying pension and insurance company demand coupled with a diminishing budget deficit. This is the long-understood theory behind withdrawing from deficit financing.

The reality has been very different as we all know. The Fed has to face the possibility that, for whatever reason, highly suppressed interest rates are not working, and an escape from the zero interest rate bound without economic recovery may have to be contemplated.

However, if the Fed raises the Fed Funds Rate in the absence of genuine economic recovery, there will be little or no expansion of bank credit to offset, and commercial banks will want to dump their Treasuries, not buy more from the Fed. There would be no offsets to cushion the unwinding of long bond positions. In other words the effect of even a small rise in the Fed Funds Rate could develop into a self-feeding rise in bond yields and substantial losses for the banks.

This is the context within which we should consider the Fed's decision to back off from raising the Fed Funds Rate mid-year. It leads to the conclusion that if zero interest rates haven't worked for six and a quarter years, monetary policy itself is in a cul-de-sac with no space to turn. And when we look at Japan and the Eurozone we see similar disappointments over the effectiveness of monetary policy.

Markets are unlikely to wait until the escape from the zero bound is put to the test. Before the investing public becomes aware of the full ramifications of the problem, more prescient bankers and fund managers will reposition their bond holdings, which brings us to gold.

Those of us that follow this market closely know that for the last three years at least Asian demand has led to large shifts of bullion from western capital markets towards Asia. The behaviour of the markets in London and New York already indicate that shortages of physical bullion are a delicate problem, and this is before markets wake up to the growing likelihood that the Fed cannot afford to see interest rates rise.

If interest rates cannot rise, then the dollar itself is ultimately exposed to loss of confidence in the foreign exchanges. The dawning realisation that after recent strength, the dollar is vulnerable after all can be expected to be reflected in a positive sentiment towards gold, which once under way could drive the price up dramatically due to the lack of available bullion.