The Gold Money Index, created by James Turk, is a simple but logical formula. It treats central bank gold reserves as international money – the world’s true and only reserve currency, if you will – and compares said gold reserves against central banks’ fiat currency reserves.

At first glance this treatment of gold might sound unorthodox, but nothing could be further from the truth. For instance, under the Bretton Woods Agreement of 1944, international central banks trusted the US dollar because, after it was received for international commerce, it could be presented back to the US and redeemed for a designated amount of gold. Hence it was gold, not (paper) dollars that settled the balance of payments between nations and their respective markets.

History would show, however, that the United States government could not keep its “golden promise”. In 1971, with numerous foreign central banks turning in their US dollar reserves for gold, the United States closed “the gold window” and ceased redeeming US dollars for gold. Since then, the dollar has been paper money.

As international trade has grown, so have international payments. Foreign central banks now hold over $10 trillion dollars’ worth of foreign currencies. 60% of those reserves are held in US dollars and dollar-denominated securities. The reason for US dollar dominance is simple: since Bretton Woods the dollar has been the undisputed world reserve currency, meaning that it is the settlement currency of choice for all manner of commercial activities around the world which may or may not have anything to do with America or Americans. A Russian supermarket might arrange a deal to import wine from Chile; they will pay the Chileans in US dollars – not pesos or rubles. When you buy gold with GoldMoney, even if your are using a currency other than the US dollar to fund the purchase, that currency will first have to be converted into US dollars for GoldMoney to buy your metal.

There is however a contradiction, identified by Belgian economist Robert Triffin in the 1960s, between the world’s need for a liquid reserve currency – which requires America to run persistent trade deficits – and the long-term health of the dollar. Constantly running trade deficits weakens the dollar and so causes the countries that are accumulating an ever-greater mound of greenbacks to look for alternate means of preserving their wealth. Reserve-currency status carries with it the seeds of its own destruction.

This is the situation we are faced with today. Surplus nations around the world are up to their eyeballs in US government liabilities. But the Federal Reserve is determined to devalue the dollar in order to promote economic recovery in America. So these countries – notably China, owner of some $3 trillion in dollar-denominated reserves – are faced with the prospect of seeing their hard-earned wealth frittered away by the Fed’s printing press.

So they’re looking to “get out of Dodge” by exchanging their dollars for other assets – notably gold. According to official statistics, just 1.6% of China’s $3 trillion foreign exchange reserves are allocated to gold. The world average is 14.4%. So the Chinese need to (and are) doing a lot of buying in order to close the “gold gap”.

So how high can we expect gold to go as a result of buying from China and elsewhere? The Gold Money Index might provide us with an answer.

The “fair price” of gold today

As one might venture, the fair price of gold remains well above the current spot price. According to current statistics from the International Monetary Fund, the Currency Composition of Official Foreign Exchange Reserves (COFER) – that is, the total holdings of official foreign currency at central banks – has increased to over $10 trillion USD ($10,778,740,000,000 to be exact). Conversely, central bank holdings of gold currently stand at just 31,575 tonnes. 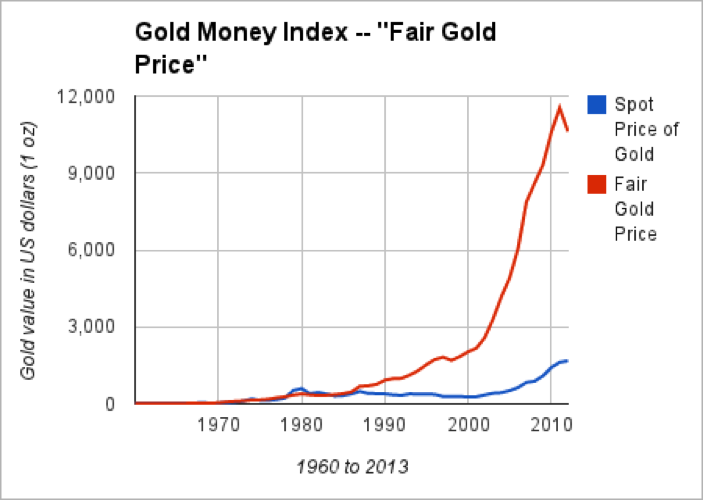 As central banks and individuals seek to increase their allocation to gold as the US dollar steadily devalues, we can expect gold to surge from present levels. All the way to $11,000? Perhaps. Only time will tell.