Brexit is getting the blame

Brexit is not the most important problem facing markets, it is mounting problems in the European banks.

But before looking at that systemic issue, I will summarise the Brexit position, from the trenches, in the last few days before the referendum.

In the run-up to Britain’s referendum on 23rd June, the Treasury was tasked with modelling the economy, post Brexit. The result was George Osborn claimed that a Brexit vote could cost every household £4,300. This is the underlying reason that markets, allegedly, are frightened of Brexit.

One suspects that if the Treasury models had suggested there is little cost to leaving, the result would have not been published and George Osborne would have contrived a different argument. Anyway, we all know that econometric models suffer from garbage in, garbage out, but the Treasury is meant to be authoritative and trusted. However, a new paper by Professor David Blake of the Cass Business school points out “the extraordinary abuse of economic models in the EU Referendum debate”, and he is moved to term the two Treasury reports that gave the Chancellor his facts as “dodgy dossiers”.i

Any good Austrian economist can tell you why economic models do not work. Without going into it here, models should simply be disregarded. Professor Blake’s paper exposes the techniques, as well as the statistical assumptions, employed by the British government when using econometric modelling to frighten voters into voting to remain. Separately, a new book co-authored by Dr Radomir Tylecote and Sir Bill Cash charts the history of the EU project, from America’s post-war strategy, implemented through the American Committee on United Europe in 1948, with strategic assumptions that persist to the present day.ii

The paper and the book taken together expose the truths withheld or obscured by the British government at the time of the first referendum, and the use of a similar approach today. This time, the vested interests and scare tactics used by the government appear to have begun to smell to the electorate like a long-dead rat. Instead, ordinary voters are more worried about the high levels of immigration and the strains placed on health and education services, the housing shortage, and the suppression of wages.

George Osborne has admitted that the Treasury is working with the Bank of England on Brexit contingency plans, but no plans have emerged so far to save the necks of cabinet ministers in the event of a Remain vote. A win for Remain will be only the start of their problems, unless, as seems most unlikely, Remain wins by a clear margin.

In the event of a narrow win for the establishment, which is the outcome pollsters currently expect, claims that it would be better to be inside the EU, where Britain can influence policy, will almost certainly be proved to be an illusion. The UK’s referendum will have threatened the future of the EU project, and it would be entirely natural for a very relieved Brussels to regard the British government as having lost its credibility and to treat it with disdain. Britain is easily out-voted in the Council of Ministers, having only 13% of the votes, and the Franco-German duopoly will surely ensure Britain is side-lined in all policy issues. The idea that Britain is protected by opt-outs will be exposed as wholly inconsistent with EU treaties, and therefore the facts.

Democracy is not only ignored by the EU’s unelected commissioners; it is written out of the EU’s constitution. There should be no doubt about Brussel’s view of democracy and referenda. Jean-Claude Junker, President of the European Commission, is reported to have said, “There can be no democratic choice against the EU treaties”, and Celia Malmstrom, the EU Commissioner for Trade, said “I don’t take my mandate from the European people”.

Therefore, a British government minister rooting for Remain today will be in an untenable position in the event that Remain actually wins. Unless it is the overwhelming public choice, a public which feels cheated by the political establishment will turn against it, as will the members of the parliamentary party that campaigned for Brexit. The Conservatives would be bound to face a severe internal crisis. It appears likely that so long as the polls indicate a close result, we can expect the self-interests of the political class to wane in its support for Remain, and to drift towards Brexit, because both the party and power are more important to many of the Remainers than the European issue.

This development is not currently discounted by the media, and jumping ship is always risky in politics. But if this analysis is correct, it may further boost the Brexit cause. Already, the opinion polls are moving Brexit into the lead, and if this momentum continues in the short time left, Brexit could actually win the day. But, as they say, a week is a long time in politics, and we have one week to go before the referendum.

Surprisingly perhaps, Brexit would therefore be the least contentious and therefore the best outcome for the Conservative Party, for the reasons mentioned above. This would end an argument which has split the party since Macmillan was Prime Minister, and when Conservative voters were first persuaded the Common Market was a free market. If the referendum result is for Brexit, politicians in favour of Remain will simply submit to the wishes of the electorate, adapt to the new reality, and wait for the controversy to blow over. Nothing will happen immediately anyway, because it is likely to take at least two or three years to disengage from the EU.

The danger of this outcome to the EU project is suddenly becoming a real threat to the Brussels establishment. Donald Tusk, the Polish politician and historian, who is the current President of the European Council, warned earlier this week in an interview with Germany’s Bild that Brexit “could be the start of the process of destruction of not only the EU, but also of the Western political civilisation”. A bit over the top perhaps, but bear in mind that Poland feels insecure with its Eastern neighbours.

It’s all about the banks

Political instability for the EU is a significant and visible threat, but is not the immediate problem, which is financial. As a result of savings and spending imbalances, none of the core Eurozone states can stand on their own. Substantially, Germany’s private sector savings are loaned to the governments of, and businesses in, France Italy Spain Portugal and Greece. None of these governments are able to repay German savers, nor are they able to roll over increasing debts indefinitely. Furthermore, bad debts are piling up in their private sectors, with Italy now a basket case, where non-performing private sector bank loans officially amount to nearly 20% of GDP.iii

Caught in the middle of these imbalances are the private sector banks. Because of the scale of these problems, it is no longer a patch-and-mend issue, but a serious systemic problem. The European banking system has been struggling for survival ever since the Lehman crisis, reflected in the dismal performance of share prices for nearly all the major banks.

The chart below illustrates how these problems are reflected in just three leading banks’ share prices over the last twelve months. 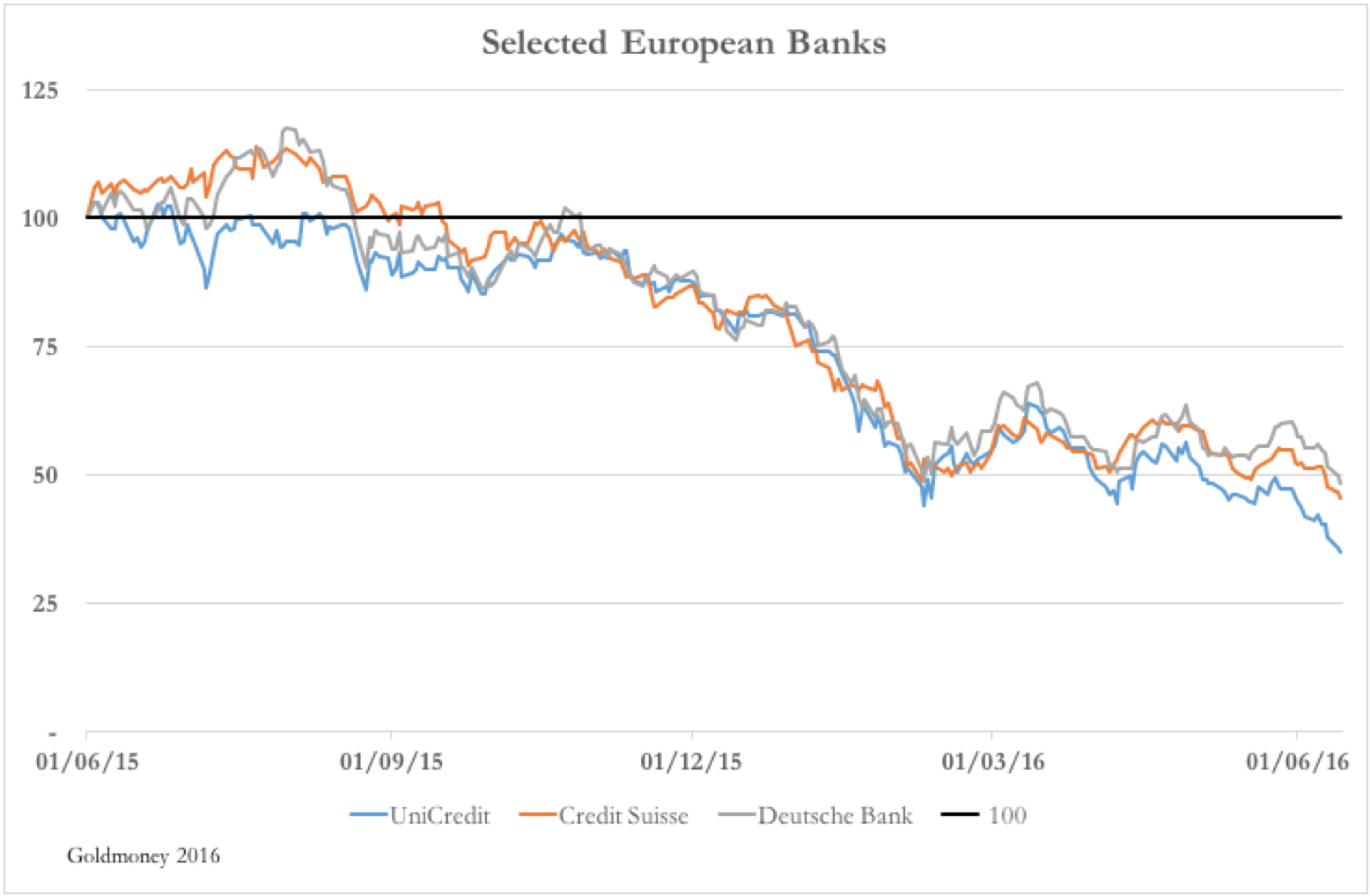 Since this time last year, UniCredit, Credit Suisse and Deutsche Bank have seen their share prices more than halve. Worryingly, the crisis lows of last February, when the Italian banking system’s current difficulties began to surface in the financial press, are being breached.

Analysts at Morgan Stanley are also worried. According to a recent article published by Reuters, they believe that UniCredit and Deutsche Bank may struggle to pay coupons on their Additional Tier 1 capital, or contingent capital bonds (cocos). Morgan Stanley added that cocos issued by Credit Agricole, BNP Paribas, and Credit Suisse could also be at risk.v

The other evidence of banking woes is the flight of investment capital into government bonds from cash and deposits held within the banking system, so much so that Germany’s 10-year bund now carries a negative redemption yield. The flight into tangible bonds is so pronounced, that €400bn of investment grade corporate bonds are also on negative redemption yields. Market commentators are blaming this on fear of Brexit, but one look at the financial condition of the European banks tells us a different story. The banks must be struggling with deposit contraction on their balance sheets, fuelled by a combination of negative interest rates and systemic fears, at a time when their loan books are burdened with bad and irrecoverable debts. It looks like the modern equivalent of an old-fashioned run on the banking system, led by the pension and insurance companies, which are becoming increasingly concerned about leaving balances with the banks.

Even though the ECB’s Mario Draghi has committed to do “whatever it takes,” the Eurozone has become a dangerous place for savings and investment.

Whatever the outcome of the Brexit referendum next week, it would appear that nothing can stop a systemic crisis developing in Europe. The two issues are unrelated, though Brexit could be blamed as a trigger. Brexit will come and go, but a European banking failure will remain with us, whatever happens on June 23rd.

[i] The phrase “dodgy dossiers” first surfaced in allegations that the British Government fabricated intelligence over Iraq’s weapons of mass destruction, which never existed.  I’m grateful to Professor Keven Dowd for drawing this important paper to my attention.

[iii] See my article, The Eurozone is the greatest danger, Goldmoney Insights, 19 May.