Bank gearing in the Eurozone

According to the ECB's Bank Lending Survey for October banks eased their credit standards in the last quarter, while their risk perceptions increased.

This apparent contradiction suggests that the 137 banks surveyed were at the margin competing for lower-quality business, hardly the sign of a healthy lending market. Furthermore, the detail showed enterprises were cutting borrowing for fixed investment sharply and required more working capital instead to finance inventories and perhaps to cover trading losses.

This survey follows bank lending statistics since the banking crisis to mid-2014, which are shown in the chart below (Source: ECB). 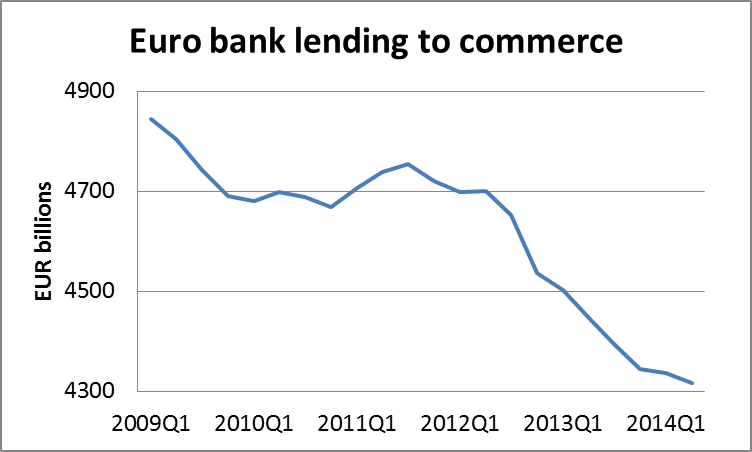 It is likely that some of the contraction in bank lending has been replaced with bond finance by the larger credit-worthy corporations, and Eurozone banks have also preferred buying sovereign bonds. Meanwhile, the Eurozone economy obviously faces a deepening crisis.

There are some global systemically important banks (G-SIBs) based in the Eurozone, and this week the Financial Stability Board (FSB) published a consultation document on G-SIBs' capital ratios in connection with the bail-in procedures to be considered at the G20 meeting this weekend. The timing is not helpful for the ECB, because the FSB's principle recommendation is that G-SIBs' Tier 1 and 2 capital should as a minimum be double the Basel III level. This gives operational leverage of between 5 and 6.25 times risk-weighted assets, compared with up to 12.5 times under Basel III.

The FSB expects the required capital increase to be satisfied mostly by the issue of qualifying debt instruments, so the G-SIBs will not have to tap equity markets. However, since Eurozone G-SIBs are faced with issuing bonds at higher interest rates than the returns on sovereign debt, they will be tempted to scale back their balance sheets instead. Meanwhile bank depositors should note they are no longer at the head of the creditors' queue when their bank goes bust, which could affect the non-G-SIB banks with higher capital ratios.

If G-SIBs can be de-geared without triggering a bank lending crisis the world of finance should eventually be a safer place: that's the intention. Unfortunately, a bail-in of a large bank is unlikely to work in practice, because if an important bank does go to the wall, without the limitless government backing of a bail-out, money-markets will almost certainly fail to function in its wake and the crisis could rapidly become systemic.

Meanwhile, it might appear that the ECB is a powerless bystander watching a train-wreck in the making. Businesses in the Eurozone appear to only want to borrow to survive, as we can see from the October Bank Lending Survey. Key banks are now being told to halve their balance sheet gearing, encouraging a further reduction in bank credit. Normally a central bank would respond by increasing the quantity of narrow money, which the ECB is trying to do despite the legal hurdles in its founding constitution.

However, it is becoming apparent that the ECB's intention to increase its balance sheet by up to €1 trillion may not be nearly enough, given that the FSB's proposals look like giving an added spin to contraction of bank credit in the Eurozone.