Bitcoin is more valuable than gold?

The price of Bitcoin seems to have exceeded the price of gold for the first time; however, this comparison is completely arbitrary. Gold is measured in weight, while Bitcoin, much like currency, is an abstract form of money and can only be measured in units of itself. One Bitcoin is worth a lot more than 1 gram of gold, but a lot less than 1 tonne. Despite Bitcoin’s stellar performance in 2016, the size and depth of the cryptocurrency market is dwarfed by the $7 trillion gold market. Gold remains the only true global money with a size and volatility comparable to that of fiat currency.

Bitcoin – or cryptocurrency itself – is the most exciting monetary experiment in modern times.

Unlike fiat currency, it can’t just be printed, and it mimics the scarcity properties of gold in that it needs an enormous amount of energy to create one coin. The energy-proof of value is what links gold to the primary industries and allows it to maintain its purchasing power over incredibly long periods of time. Without it, any form of money will inevitably be corrupted over time and decay. Bitcoin has some of the same energy-proof of value that makes gold far superior to fiat currency, which can be created with the stroke of a key. Bitcoin, also like gold, is a global currency that may be universally accepted in the future. Even USD can’t make that claim.

Bitcoin has some qualities that are not shared by any other form of money, most notably the potential total anonymity in electronic transactions; however, some might feel that aspect that may prevent the universal adoption of Bitcoin as money. Today, the global stock of Bitcoin is just $20 billion (despite its price rally) and its transaction volume is tiny, even when compared to more exotic currencies. That said, as the adoption of Bitcoin increases, governments may no longer be happy with the fact that it can be used for anonymous transactions and may prevent legitimate businesses from accepting it as money if they see this as a threat. Only time will tell. In the meantime, Bitcoin remains the only alternative to gold (and other precious metals) for savers to escape the built-in decay function of fiat currency otherwise known as inflation.

Bitcoin is currently in the limelight because it has apparently exceeded the price of gold for the first time on some exchanges (although at the time of writing, Bloomberg still shows an average price of Bitcoin hasn’t crossed the gold price yet, but it seems just a question of time). We have no doubt that this will lead to a barrage of headlines in online media, and some mainstream outlets will jump on the bandwagon as well. After all, they already widely reported on a claim made by the Winklevoss brothers in mid-2016 that Bitcoin’s volatility had apparently fallen below the volatility of gold, and thus Bitcoin had become “better at being gold than gold”. We rebutted this claim and surely Bitcoin’s volatility shot back up to 100% shortly thereafter.

Bitcoin has rallied almost USD500 last year and USD100 in the first two days of 2017 alone. At the time of writing, 1 Bitcoin was trading at USD1,135, while 1 oz of gold was trading at USD1,164. To some, it may seem like Bitcoin is about to be more valuable than gold, and though this is of course conceptually incorrect, it probably won’t stop the media pundits from publishing the headline anyway.

Gold and elements can be measured by weight (oz, g, kg, t). Mass and weight are the measuring units endowed by nature. Fiat currencies, or any other abstract commodity or money (including Bitcoin), cannot be measured that way. An abstraction can only be measured in units of itself. Gold and silver are therefore the only form of money today that are traded in weight. Fiat currency on the other hand cannot be measured by anything other than other currency, at least since Nixon ended the convertibility to gold in 1971. In that respect, Bitcoin falls into the same category. 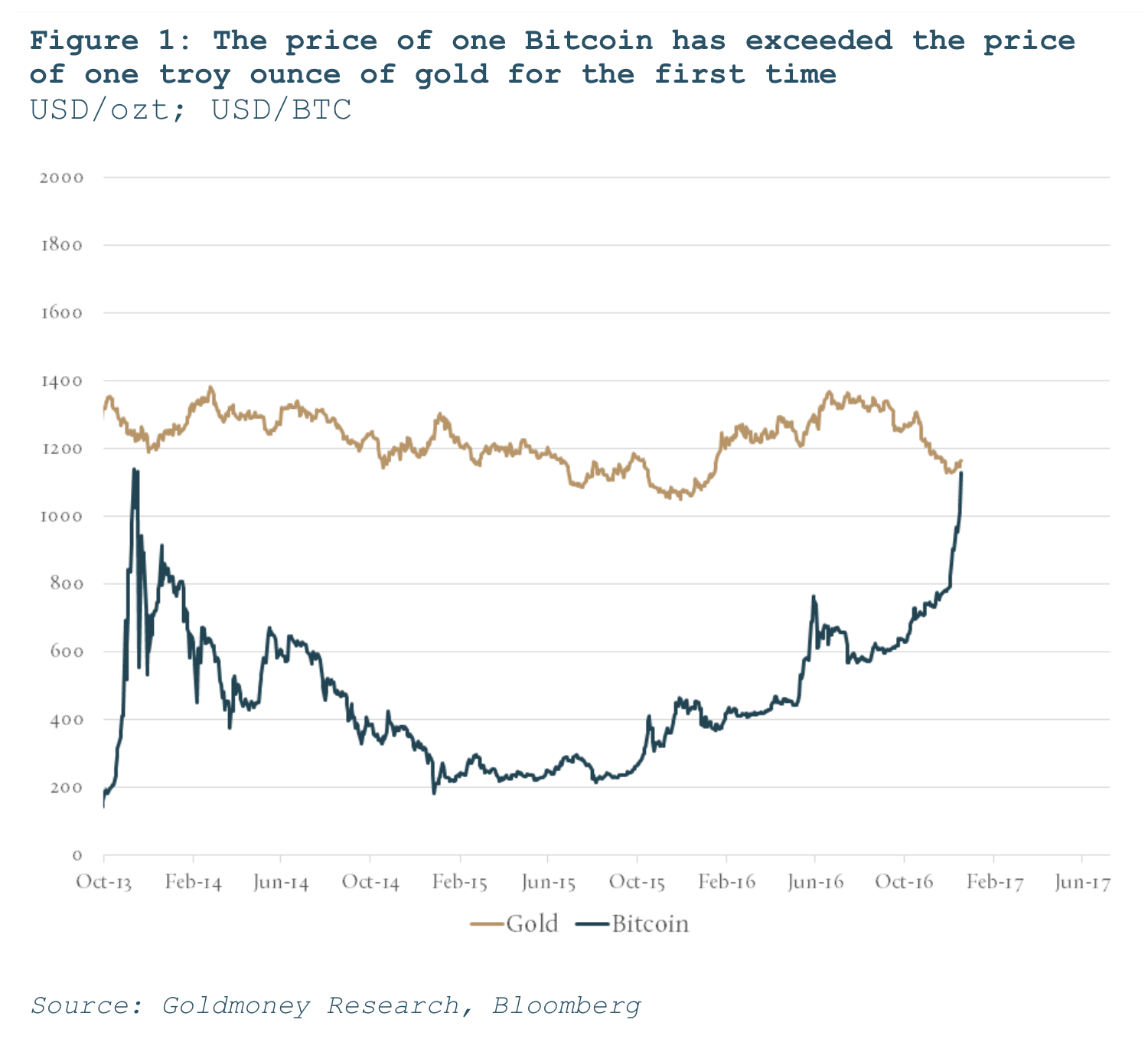 Thus, when comparing units of gold to units of Bitcoin, one must first define what unit it is measured against. Is it grams (currently USD37/g), kilograms (USD37,000/kg) or tonnes (USD 37 million/tonne)? Or are we measuring it in the rather obscure measure of troy ounce (USD1,157/ozt), which, apart from exchange traded metals, is not used for anything else?

The same basic principle applies to money. Combined above-ground gold stocks are currently worth around $7 trillion. As we noted last year, that is more than all banknotes in circulation of all currencies combined (see Eliminating cash will also eliminate the checks and balances on banking policy and practice, February 22, 2016), and it certainly dwarfs the market cap of Bitcoin at around $18 billion. In fact, all crypto-currencies combined (we count 710) have a market cap of just $21 billion (see Figure 2). 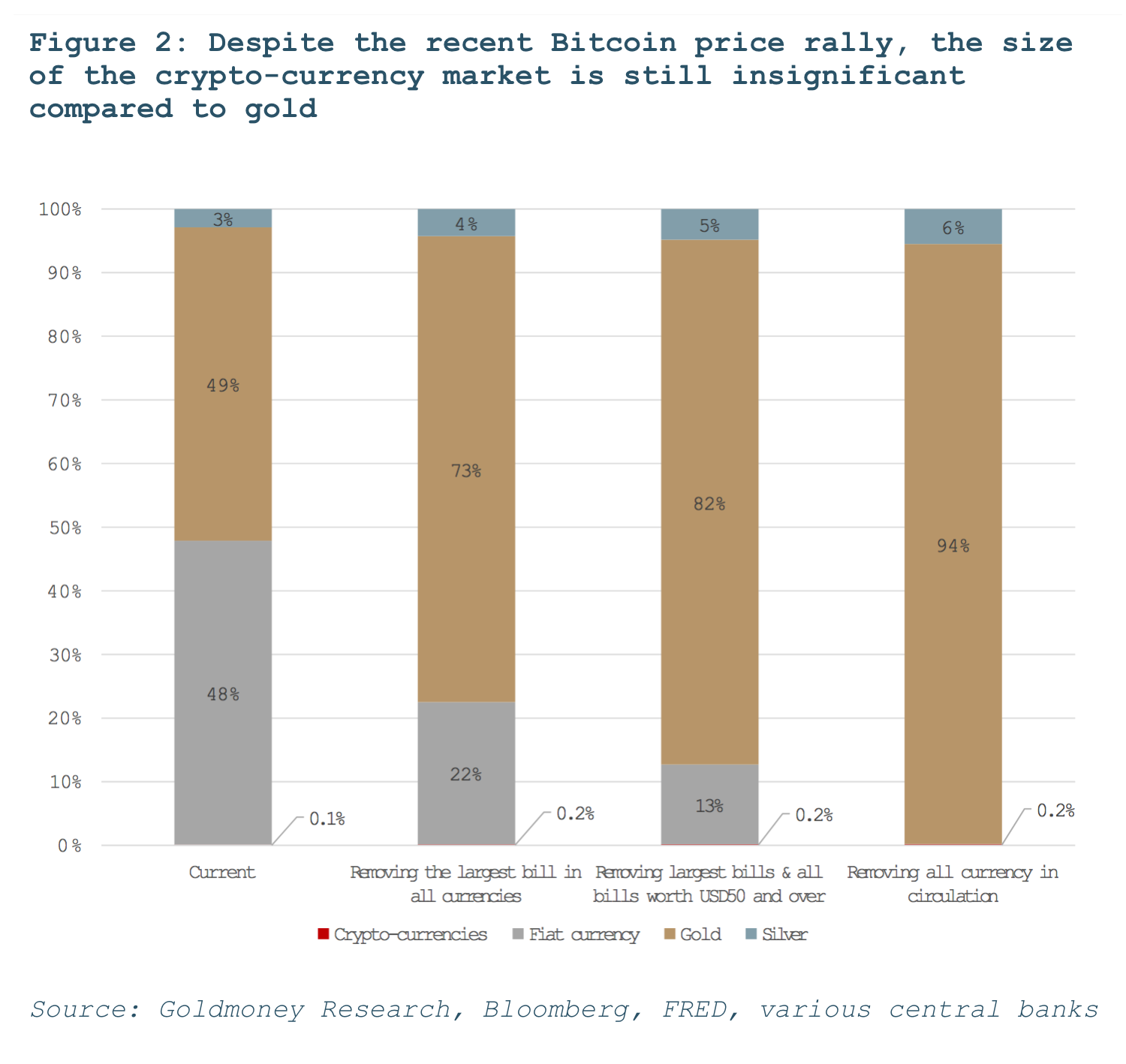 There is another obvious obstacle when comparing Bitcoin with gold: Volatility. High volatility is often pointed out against gold being used as medium of exchange and store of value. We will look the volatility of gold in more detail in an upcoming report, but in a nutshell, we find the volatility of gold (measured as standard deviation) is roughly comparable with currency, and gold has proven to be a much better store of value than any currency over the long run - even when interest is taken into account. Bitcoin’s volatility significantly exceeds that of both gold and currency. At times, Bitcoin’s volatility declines for a short period and can even approach the volatilities of gold and currency, but tends to shoot up violently shortly thereafter. 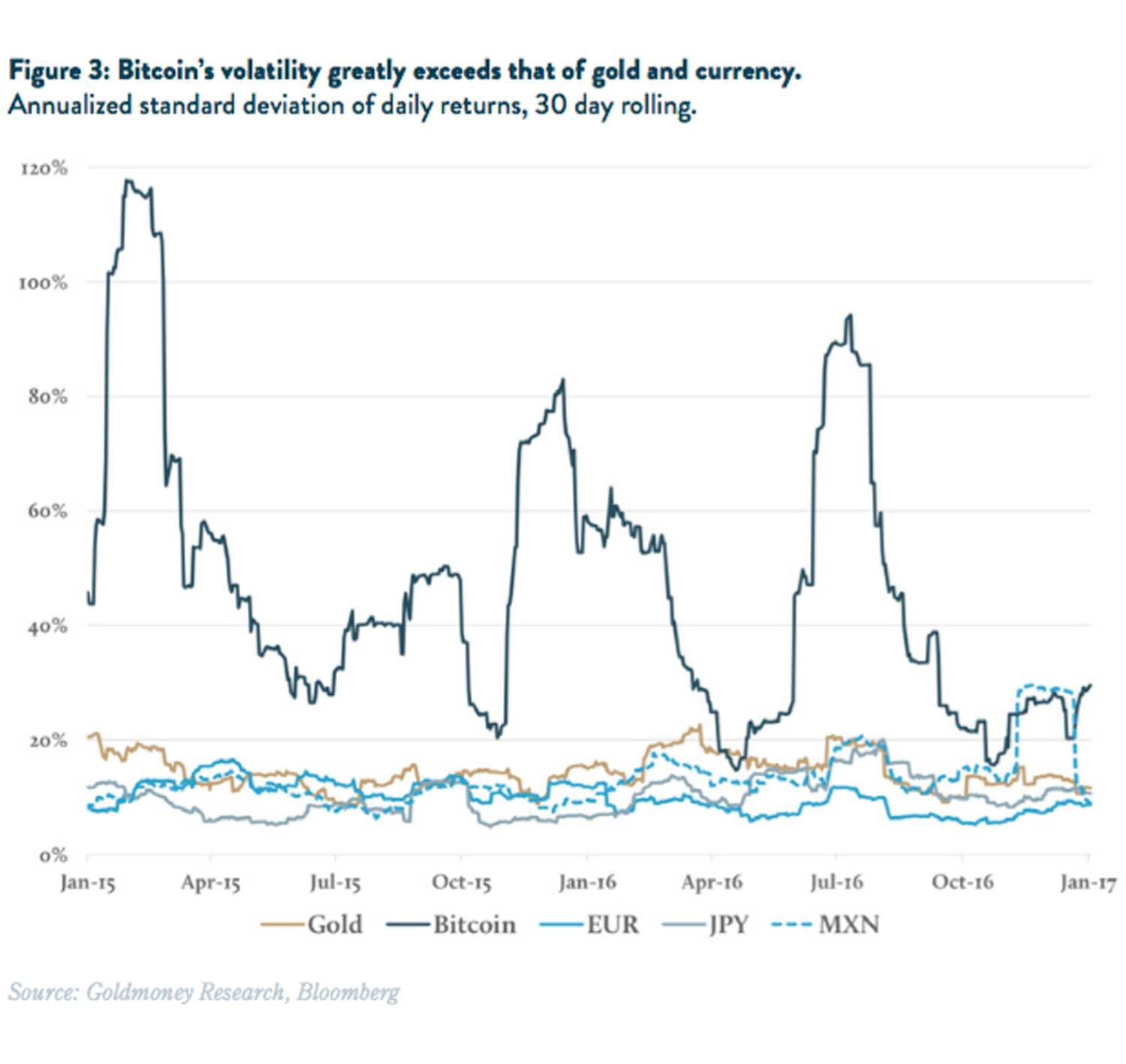 For example, an asset that has a 1% return every second day and 0% return every other day would exhibit an annualized standard deviation of 8%. An asset that has a -1% performance every second day and 0% every other day exhibits the same standard deviation. In an asset management context, the two assets may have the same risk. In fact, the negatively performing asset might reduce risk in a portfolio if it is negatively correlated to the other assets. But for a saver, the first asset is clearly less risky.

Hence, instead of measuring volatility as standard deviation, we can measure just the downside deviation. This provides a better idea of the risks of money. How does this look for Bitcoin? Bitcoin’s downside deviation is still several orders of magnitude higher than that of gold or currency. Over the past two years, Bitcoin experienced a downside deviation of >45%. Since the beginning of data in 2010, it was >100%. 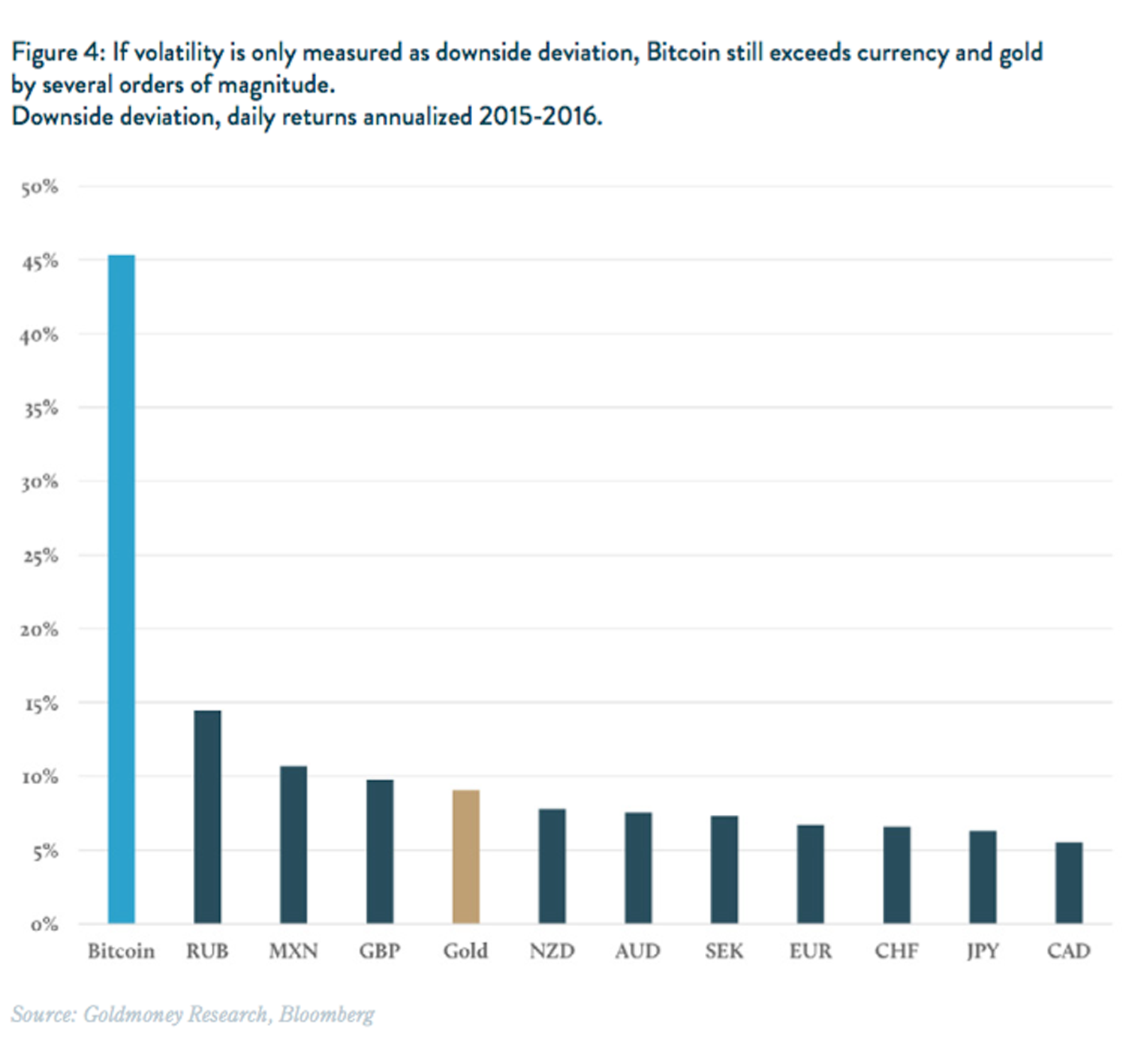 The volatility – or to be precise, the downside risk – makes it difficult for Bitcoin to be more widely adopted as money. What speaks for Bitcoin is that it has shown stellar performance over its short lifespan, but this stellar performance comes with considerable downside risk. A merchant accepting Bitcoin as payment is exposed to this downside risk unless he instantly exchanges Bitcoins back to currency following the transaction. Even though a cycle takes about 6 minutes in theory, exchanging Bitcoin to currency actually takes about one hour to confirm the transaction and another hour to confirm the price, during which at the very least the merchant is exposed to the downside volatility. Holding Bitcoins permanently might hold huge upside, but that also comes with intolerable downside risk for a merchant. After all, merchants should spend their time and energy with what they are best at (selling goods) rather than trading currencies and Bitcoin.

Another claim we don’t agree with is that Bitcoin is as free of counter-party risk as gold. It’s not an easy task, but it is possible to alter the source code of cryptocurrencies and there is no guarantee that the Bitcoin blockchain will never be altered in the future. In this regard, we don’t agree that Bitcoin does not have custodial or counter-party risk; the blockchain itself is the fat tail. Arguably, it is unlikely that it will be changed in ways that go against the interest of the people who own and hold Bitcoins. This is in stark contrast to fiat currency, where it is unambiguously in the interest of those controlling its circulation to foster its depreciation. If stored properly, there is no counter-party risk to Bitcoin equivalent to that of a bank default; in that respect, holding a gold bar, storing a $100 bill under the mattress or owning a Bitcoin in a wallet are the same. On the other hand, a bank customer is always an unsecured creditor to the bank. Thus, although the counter-party risk of Bitcoin is not zero in our view, its risk is not comparable to that of fiat currency.1

This means that for now, gold remains the only global currency in which individuals and corporations can transact with no time delay, with price volatility comparable to that of major currencies yet without counter-party risk, and one that has been proven as a store of value for thousands of years.

1In a previous version of this note, we used oversimplified language to describe Bitcoin’s counter-party risk related to the fact that the source code of any cryptocurrency can be altered. We did not intend to suggest that one entity has the power to change the blockchain at will, and have changed the wording accordingly. The section was not part of our core analysis and should not be taken as our opposition to Bitcoin or cryptocurrencies in general.