The second part of an extended essay on the gold standard.

In Golden stability versus fiat chaos (Part I) we discussed how gold money preserves purchasing power and attacked the factually and logically wrong argument that a fiat currency would or could, if “properly managed", prove more stable and better at preserving value than gold money. History is eloquent in this regard.

In Part II we shall look at the other popular attack on a gold standard: that it creates economic instability or that it aggravates the boom-bust cycle.

The claim that the gold standard exaggerates economic fluctuations is based on an incorrect understanding of the business cycle and especially, since it is most often cited, the 1920s post-First World War gold exchange standard. The argument is usually brought up as part of a false dichotomy between an imperfect gold standard and an imaginary perfect set of countercyclical interventions by central banks. Never mind that in reality central bank interventions tend to be pro-cyclical because of the way that political incentives align. We shall ignore the logical fallacy of comparing history to utopia and look at fact. How does monetary central planning measure against the self-regulating negative-feedback mechanism that is at the heart of the gold standard?

First we must understand how the business cycle works. The mechanism itself is complex and has been studied endlessly since the industrial revolution, when the monetary school and the currency school debated it in depth before Peel’s Bank Act of 1844 imperfectly ended the controversy. The key is artificial credit creation through the fractional reserve banking system.

Fractional reserve banks pyramid credit on top of their existing deposits. This excess credit fuels malinvestments, that is, investments that are unsustainable because they rely on non-existent savings to see them through to successful completion and unrealistic expectations to make them profitable, otherwise known as bubbles. When the bubble bursts, usually punctured by some major catalyst which scares businesses into looking more closely at those tulips or dot-com stocks that they put so much faith in, falling asset prices cause bankruptcies and the subsequent credit contraction forces banks to fail and malinvestments to be liquidated. The similarities to a ponzi or pyramid scheme are glaring: new money stops coming in, confidence evaporates and so does credit, forcing bankruptcy.

The key is artificial credit creation. Fractional reserve banking makes it possible, central banking saves the culprits through lender of last resort action (a.k.a. bank bailouts) and fiat currency removes any limits that reality could impose on central bank action.

How does the gold standard impact this dynamic? It depends on the other factors, but there are historical examples for every combination: The 19th century Suffolk System illustrates how the market imposes discipline on fractional reserve banks in the absence of a central bank. The Bank of Amsterdam shows the impressive results of combining a gold standard with full reserve banking. Newton’s classical gold standardshows what happens when a central bank acts as lender of last resort, but is still held in check by gold. Of course we also have countless examples of fractional reserve banking combined with unfettered central banking and fiat currency. To put it succinctly, it never ends well.

Gold acts as a restraint on both the boom and the bust. The amount of artificial credit (which fuels the boom and evaporates during the bust) that can be created is greatly reduced when there is a real, physical limit put on the money supply. A bank that might be able to get away with an 80% reserve ratio under a gold standard will happily hold only 30% reserves with the backstop of a central bank guarantee and only 5%, 2% or zero reserves if it knows that the central bank can print unlimited amounts of money to rescue it.

This latter scenario is where we are now. Under a fully fiat system the only limit to the size of bubbles is the limit on the political will to print. It stands to reason that booms and busts will be larger, more destructive and less conducive to stable economic growth. 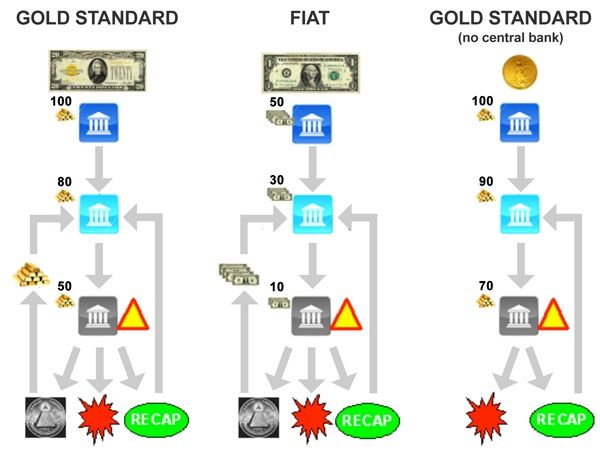 The picture above illustrates the process under each system. As fractional reserve banks create artificial credit, their reserve ratio decreases until eventually concerns are raised over banks’ solvency. When this happens, in the absence of a central bank, banks can only recapitalise (denoted as “RECAP” in the picture) or go bankrupt. This forces debt liquidation, restores confidence in the system, rewards prudent banks and punishes risky behaviour.

With a central bank acting as a lender of last resort, however, a new option appears: bailouts. Banks can now ask the Fed for gold to top up their reserves and continue to misbehave. However, even with a central bank, under a gold standard there is a hard limit on the size and extent of bailouts: the central bank’s gold reserve. Under a fiat currency system even this limit disappears as the central bank can print to its hearts content, limited only by public outcry as new money affects prices and robs existing money of its purchasing power. It often ends in hyperinflation when the currency’s value is totally destroyed.

With full reserve banking the whole problem of artificial credit creation is absent (or at least limited to short lived fraudulent schemes and counterfeiting). Political instability, wars, harvests, new technologies and manias will still cause economic cycles on a smaller scale, but not the regular, cyclical boom-bust cycle which has been the bane of the West since industrialisation.

So why is gold often accused of precipitating economic instability? I would argue that it is not a logical, but rather ideological accusation, when not directly a rent-seeking drive by those interests that profit from artificial credit creation. The manager of a ponzi scheme will happily blame the whistleblower rather than admit the nature of his business. Central bankers will happily fund any number of academic works to justify their own existence.

Let us nevertheless look at these arguments. It is true that even under a gold standard the business cycle still exists. As long as artificial credit is created there will be times when malinvestments and bubbles form – and when they are revealed, they must pop. This happened every two-to-three years in the USA under the classical gold standard before the creation of the Federal Reserve, thus leading to cries for some agency to prevent panics. Rather than allow liquidation of debt and malinvestments, something that some economists find abhorrent, many argue the need for monetary and fiscal stimulus. Under gold there is a hard limit to both, and so eventually the bust is allowed to happen and gold is blamed. A prime example is the 1920-21 panic in the US, when unemployment soared, bankruptcies multiplied and consumption and investment dried up. The Fed, in its infancy, did little. The Federal government, promising a post-war “return to normalcy”, retrenched rapidly, reducing spending by almost 50% and slashed taxes by a third. Strangely, for some, recovery came rather quickly.

But wasn’t gold to blame for the bust? No. Artificial credit creation and monetary inflation (to finance the First World War) created the boom. Without the gold standard the bubble could have been inflated more and lasted longer. Larger bubbles mean a larger bust. The first lesson of the history of bubbles is that they cannot last forever, and therefore it is extremely healthy to limit the damage that their unwinding can do. Gold’s role as a break and limit on their size is an agent for stability and an indispensable ingredient for sustainable growth, that is, growth based on real capital accumulation and hence real productivity gains.

An international gold standard forces discipline on central banks, a national gold standard forces discipline on all banks. They may not like it, and those that think that central banks are agents for stability may decry it, but the facts are stark. If artificial credit creation is the disease, real money is a necessary part of the cure. The alternative is unlimited, and exponential, debt-money growth.