Gold and silver refuse to sink below their established lower consolidation levels, despite dollar strength. As can be seen in our headline chart, silver has enjoyed a decent bounce since 1 May, and gold has held firm at $1300, up 5% from the December low. Since last Friday, gold is up $8 in early European trade this morning (Friday) at $1323, having spiked down to as low as $1304 on Wednesday. Over the same time-scale, silver is up 23 cents on balance at $16.75. 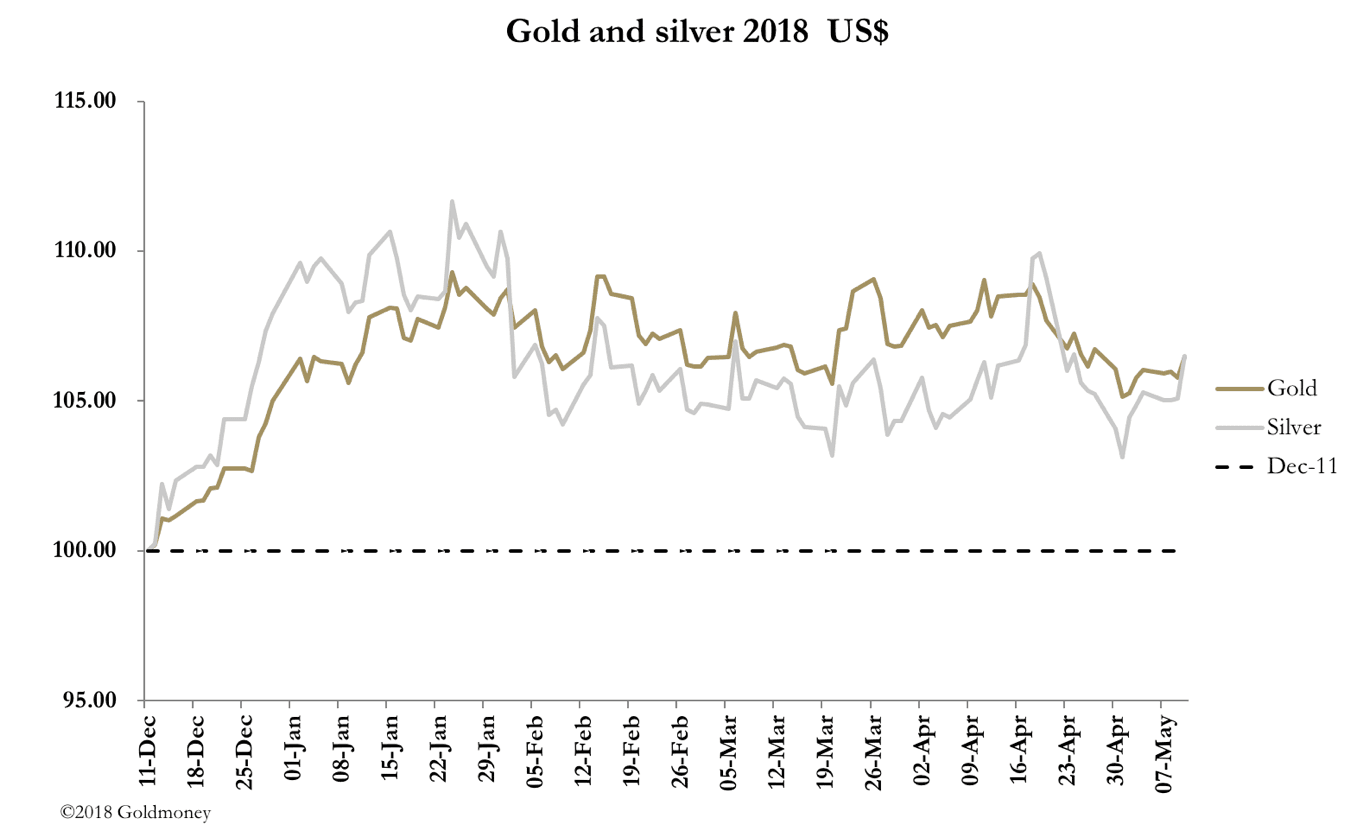 Rather than get hung up on short-term uncertainties, I shall devote the rest of this report to the medium-term outlook: we should occasionally lift our eyes from our desks to see what is actually going on around us.

This week, President Trump finally announced his decision to withdraw from the Iran nuclear deal, and to reimpose sanctions. The sanctions are so far only a threat, and Trump is liable to change his mind with little or no warning. But it seems his objective is to force regime change by crippling the economy. He has already succeeded in driving the currency lower, disrupting internal trade.

Regime change will suit Israel and Saudi Arabia, but importantly give America a stronger foothold in the region, which is why it will not be permitted to happen. China, Russia and Iran are key partners in the economic integration of the Asian continent, and all three countries are adamant in their desire to banish the dollar from their trade.

In his speech, Trump said “Powerful sanctions also go into full effect”. There are two problems with this new policy. First, it is not supported by America’s NATO allies, which have substantial business interests at stake, and second, since the last set of sanctions Russia and China have developed independent bank settlement systems, and importantly an oil future denominated in yuan. Turnover in this contract has nearly doubled over the last week to 166,162 contracts, and open interest is now 32,022 lots, representing 32,022,000 barrels of oil.

There can be little doubt this contract has attractions for Iran, allowing it to avoid using “Satan’s money”, but the question is, what does she hedge into? The answer is likely to include the one form of money that cannot be adulterated by America, and that’s physical gold, which she can do through deliverable yuan contracts in Hong Kong and Dubai.

America is unlikely to succeed in its attempt to bring down the Iranian theocracy: after all, it has been trying to do so since 1979, and only managed to make the theocracy more entrenched. If Trump does not back down, he will only accelerate Chinese and Russian plans to eliminate the dollar. If he does back down, he will have demonstrably lost the gambit, increasing anti-American, anti-dollar cohesion in the Asian powers anyway.

There may be a face-saving deal in between these outcomes, but de-dollarisation seems certain to accelerate as a result of Trump abandoning the nuclear deal and will backfire on the dollar, which is ultimately good for the gold price.