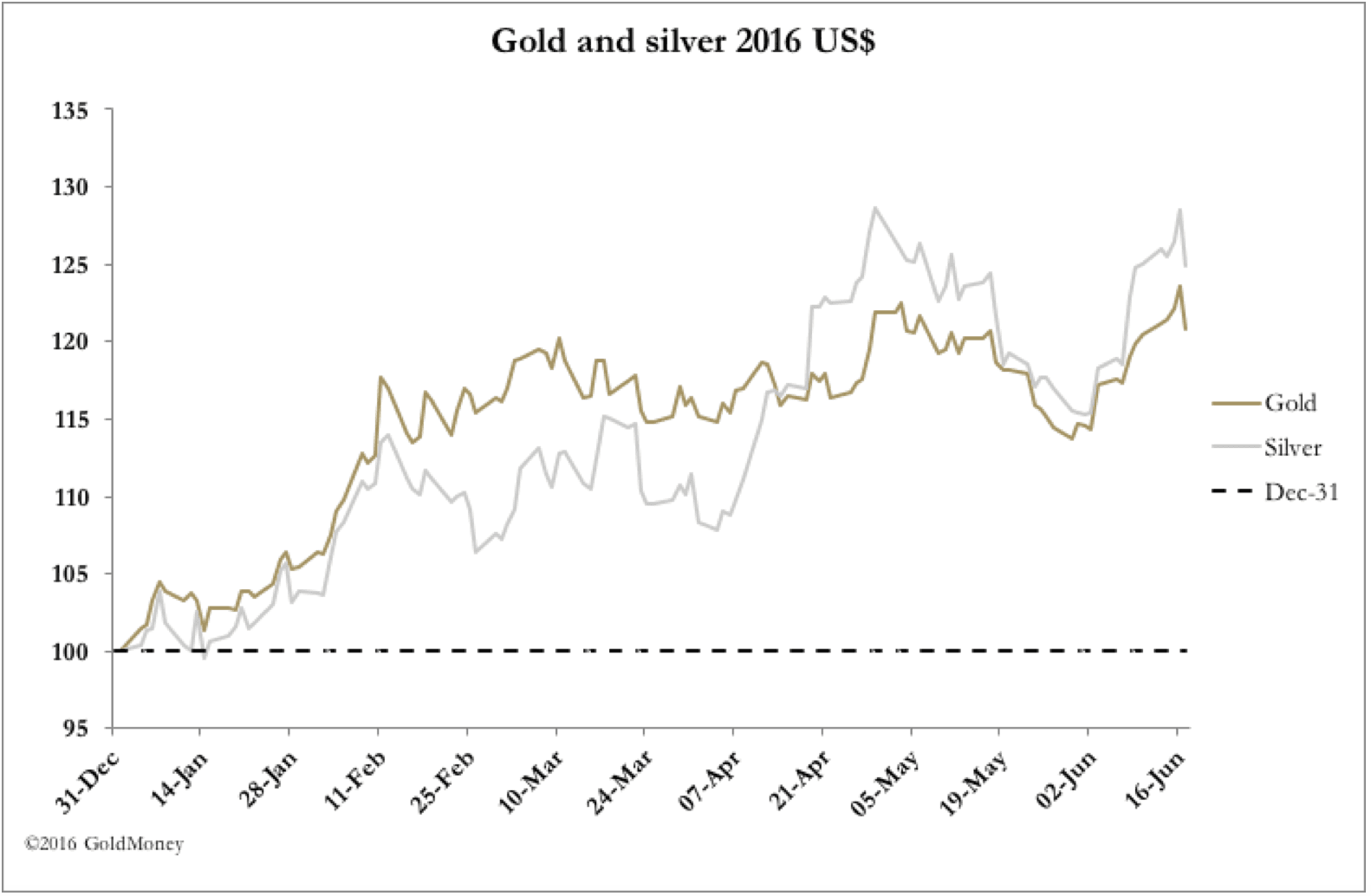 Precious metals had a strong performance this week, so much so that yesterday gold soared through the $1308 level, long regarded as the technical point which confirms, once breached, that the bear market is over.

Having closed at $1276 last Friday, yesterday gold traded as high as $1314, and silver at $17.84. Then the news that a Labour MP had been shot in her constituency, accompanied by unfounded rumours that the referendum might be postponed, reversed sterling’s downtrend. Equity markets rallied, and precious metal prices dropped, losing all the week’s gains in just a few hours. The turnaround in the gold price was $33, to close down $14 on a volatile day, and silver lost 35 cents to close at $17.22.

In early trade this morning, European time, prices were steadier, with gold up a dollar at $1283, and silver up ten cents at $17.32. Given the strength and speed of the rise over the last thirteen trading sessions, a correction of yesterday’s magnitude could be expected. Furthermore, speculative traders have good short-term profits to take, and no doubt the bullion banks who are short were itching to mark prices down ahead of the weekend.

The assumption that Brexit alone is behind current market instability appears too simplistic. Sterling has been weak, but not that weak. It certainly held the $1.40 level yesterday, before bouncing yesterday afternoon to $1.4270, almost unchanged from the previous Friday’s close. One cannot help thinking that if the Brexit story was the prime driver of global markets, not only would sterling have traded lower than it did, but selling of sterling should have pushed UK gilt yields higher. Instead, gilt yields fell to record lows, which is inconsistent with a supposed capital flight from sterling.

This is not to say that Brexit is unimportant. Indeed, Janet Yellen cited it as an uncertainty following the FOMC’s decision on Wednesday to keep rates on hold. If the British vote for Brexit, it will damage the EU, a prospect which is generating real concern in Brussels.

Meanwhile, the Government and the Bank of England is doing no one any favours by telling markets that Brexit will lead to economic collapse, higher taxes, higher interest rates, and all the rest of it. Given that withdrawing from the EU is a gradual phased process, as a US President once famously said, the only thing we have to fear, is fear itself.

There are therefore other factors at play, and the obvious one is the weakness of the European banks. The share prices of a number of systemically important banks have halved over the last twelve months, while Eurozone, Swiss and Danish bond yields have gone yet more negative. In other words, institutions are prepared to pay money not to have liquidity on deposit with the banks, and the fact that throughout Europe bond yields are behaving in this way is a strong indication that worries about banks must be spreading.

However, gold in sterling is performing very strongly, as shown in the next chart. 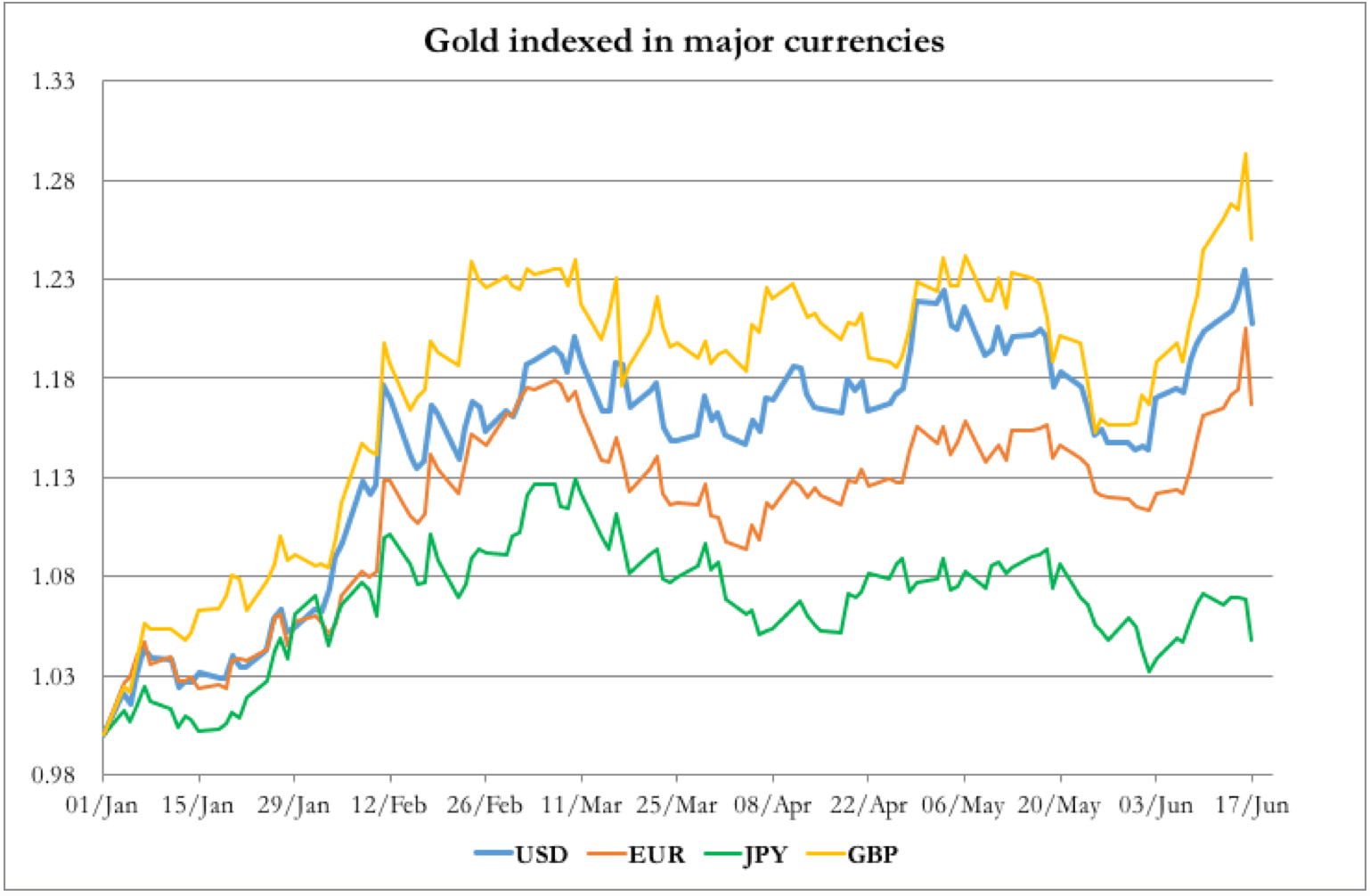 At best, gold in sterling peaked with a rise of 29% on the year so far, before settling at up 25% this morning.

It would appear that in dollars, pounds and euros, the period of price consolidation over the last three months may be over, and following some profit-taking, prices now have the potential to rise further still. This is the technical implication of yesterday’s breach of that $1308 level.